Dark Side of the Moon review

I want to start this review on a little different foot than I would normally use to approach an evaluation. I want to give readers some information about the company behind Dark Side of the Moon, SouthPeak Interactive, in order to impart a sense of what they had envisioned when designing this game.

Dark Side of the Moon was actually the second game released by SouthPeak to use the Video Reality engine, the first being the much-maligned Temujin. It had interface problems and a lack of focus that created a disjointed storyline. However, it also sparked a great deal of curiosity because of the engine it used. The thought held by many at the time was that games were going to become more and more like TV. Therefore, an engine that could effortlessly translate video into a game format would be a valuable asset. The problem not foreseen was the incredible cost inherent in creating a Full Motion Video games and the waning interest in adventure games. Dark Side of the Moon spans six CD-ROMS because it uses FMV, whereas a game like Grim Fandango only uses two for a game of greater length. All these things increase the cost of a game and make it more difficult for a company to return a profit.

Luckily, the potential for the use of this engine was better realized in Dark Side of the Moon, an engaging and engrossing tale, than in Temujin. It appeared that SouthPeak was starting to hit its stride and anticipation swirled around its next release, 20,000 Leagues Under the Sea. Then everything collapsed. In March 2000, the company was sold, the new project abandoned, and support for Temujin and Dark Side of the Moon cut. Dark Side of the Moon is still available for sale, but it is no longer supported. Though no bugs were reported when the game was first released, some who have tried to run the game under Windows 2000 and ME have had problems. So while this is a game well worth playing, and highly recommend in the following review, play it at your own risk. This is a sad ending for an exciting and interesting concept. 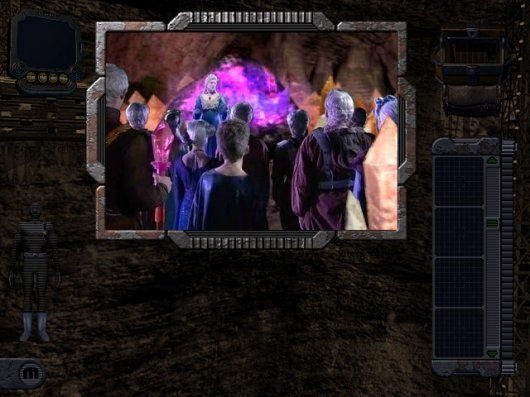 With the history lesson aside, lets get to the game. Dark Side of the Moon is one of the most enjoyable games I have ever had the pleasure to play, even enticing me to stay up half the night because I just could not put the game aside. The premise is quite simple: you play Jake Wright, a young man whose uncle Jacob has just been mysteriously killed. Uncle Jacob leaves you, his favourite nephew, his mining claim on Luna Crysta, a moon that is in another star system. So you set out on a transport to claim your inheritance. On the shuttle to Luna Crysta, you will make a new friend, Kit Ferris, who will figure greatly in your adventure.

Dark Side of the Moon is played from a first-person perspective. The game is strongly focused on story and character interaction, so you are able to work close-up with a number of different characters. Since everyone on Luna Crysta seems to have a reason to be glad your uncle is dead, ferreting out the truth through exploration and dialogue is the chief challenge. The story has multiple layers which help to open up the game world to the player despite the small playing space, but more on this later. You need to find out why your uncle was killed -- was it a suicide like the police say, or had he stumbled onto the find of a lifetime and been rubbed out by greedy miners? Casino managers? His niece? Cepheids? Or the CEO of Luna Crysta’s main mining company? Everyone is a suspect and they all seem a little too interested in your claim.

But where Dark Side of the Moon really finds its strength is in the underlying story of the moon’s native life forms, the Cepheids. They seem to live harmoniously with the miners, but as you dig deeper you soon discover sinister plots and an entire mythology that adds charm and depth to the banal "must uncover dead uncle’s killer" storyline. The Cepheids, who look like a race of albino elves, are in touch with the moon in a spiritual way, much like Native Americans are with nature. They know its most intimate secrets, but they are wary of humans and have chosen to dwell in the deepest parts of the moon rather than live near the human miners. 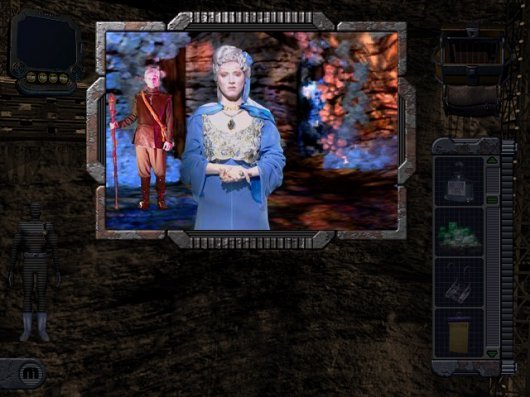 Once you start playing, the first thing you will notice is the small size of the playing window. Because Dark Side of the Moon uses FMV extensively, making it fit onto six CDs required that the size of the game window be greatly reduced. If you take a look at the screenshots from the game, you will see that you are playing the game in just over a quarter of the monitor’s space. The rest of the interface is used up by a Video Data Assistant or VDA, a picture of your body that can be clothed with found items or give small hints or reminders to the player, and your backpack which carries your inventory items. At certain points in the game, objects such as phones morph into much larger images when clicked, taking up considerably more screen space and facilitating easier interaction.

Another peculiar part of the interface is that for the majority of the game you are restricted to moving only right, left or forward. Directions are signified by an arrow pointing straight ahead or green lights on the top, bottom and sides of the game window. If you can move in a direction, the lights glow. Then one simply moves the mouse over the green light and holds it there until they have moved in that direction. Once in position, if the cursor becomes an arrow they can move forward. It took me a few minutes to get used to this, and though it made me feel slightly constricted, it soon passed and I was wandering the mining settlement. One vexation I did encounter was that at certain times the top or bottom lights would light up, but were easy to miss as they were rarely used and could be easily overlooked in the heat of gameplay.

The backdrops in the game are all rendered graphics, often with FMV interwoven. Because of the small window size, and I suspect a wish to keep the game’s size manageable, they are not as crisp and clean as we have come to expect of graphics in adventure games. During transitions, images often become very grainy, losing consistency. When you are not moving, the graphics are much more detailed but still have a blurry quality to them. The FMV, however, seamlessly combines with the scenery to create a very believable effect. The FMV is of excellent quality, presenting the characters without a blemish. Considering that only the people in the game are video and that all backgrounds and environments are computer graphics, one can imagine the incredible amount of work that must have gone into putting this game together. 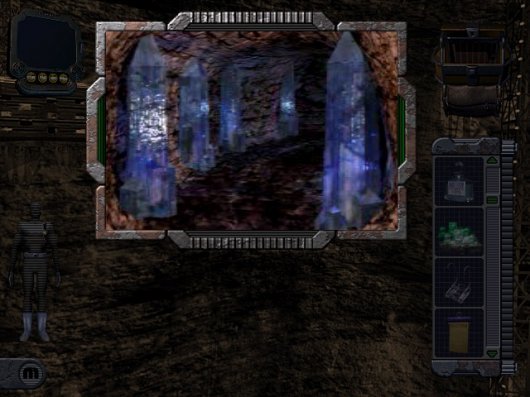 The actors used are generally very good. I was actually very happy with the quality of work I saw in the game. At a few points there is a tad over-acting, but this is the exception not the rule. The voice work done for your character is also solid. Sometimes the dialogue he spouts rings a bit unrealistic, but by and large it is understated and delivered in a subtle way. For those who hear FMV and instantly have flashes of painfully awkward and overblown performances, Dark Side of the Moon will pleasantly surprise you.

Dark Side of the Moon does not use a soundtrack, but rather chooses to use mainly ambient sounds for most of the game. In a few places like the CEO’s office, there is what could be best termed elevator music playing continuously. Other than that, all attempts are made to make sure that elevators rising and descending sound like... well, elevators rising and descending. One very nice touch is the music used to display the credits at the end of the game, which is very well matched to the feel of the game and elicits quite an emotional response. 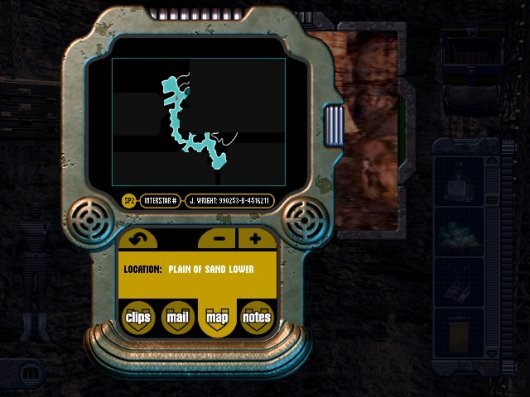 Because the game comes on six CDs, there is a great deal of disk-swapping. It is impossible to overcome, so keep the disks close while playing. You can also be pseudo-killed. I say pseudo because even though you die and go through a sort of dream sequence, you are always placed back into the game just before the act that caused your untimely demise. Sometimes you will die a few times before you happen upon the right item in your inventory to smite your enemy. Which brings us to another problem. Throughout gameplay, you pick up an inordinately large number of inventory items. Belonging to the school of ‘I might need this later’, I tend to pick up everything, which lead to problems accessing items in a timely manner later in the game. As only about five inventory items are displayed at any time, to find what you want often requires you to scroll through your entire inventory, which after the fifth time becomes a nuisance. I would have liked to be able to move my scroll bar to run horizontally across the bottom of the screen so that more items could be displayed. However, this is a problem I only encountered toward the end of the game, and since Dark Side of the Moon is not timed, it's a minor inconvenience at best.

This game is not without its little problems, but as a package it is definitely worth adding to your personal library. Though it is now three years old and the graphics lean toward grainy, it is the intelligent and cleverly crafted story that really drives this game and makes it stand out. I never felt overburdened by the amount of character dialogue I went through; in fact I enjoyed playing detective and examining each character and exploring each environment because it always added new facets to the story. The further you get into the game and the more secrets that are revealed, the more intriguing it becomes. Dark Side of the Moon is nicely constructed game that will be enjoyed by many and spoken highly of for years to come.

GAME INFO Dark Side of the Moon is an adventure game by SouthPeak released in 1998 for PC. It has a Illustrated realism, Live Action style and is played in a First-Person perspective.

What our readers think of Dark Side of the Moon