Review for J.U.L.I.A. Among the Stars

J.U.L.I.A. first came out in early 2012, earning itself a resounding recommendation for its unique presentation, creative gameplay, and unabashed indie sensibilities. But CBE Software, the two-man Czech team behind the game, still weren’t satisfied, so they started a crowdfunding campaign to make an enhanced version. Far exceeding their initial goal, they then decided to go all in, completely revamping and expanding J.U.L.I.A., including new graphics, puzzles, and a more fleshed-out backstory. The result is J.U.L.I.A. Among the Stars, which further improves upon the positives of the first game while changing the aspects that didn’t work, making for an even more enjoyable experience.

The storyline is basically the same. Astrobiologist Rachel Manners awakes from cryo-sleep in deep space, alone on a probe, the rest of her crew missing and only the titular artificial intelligence as company. Players explore the six planets in the current solar system vicariously through Mobot, the planetary exploration robot, searching for clues to what might have happened. The evolving friendship between Rachel, Julia, and Mobot feels right, carried along by their teasing, gentle reprimands and conversations. The two artificial characters don’t feel merely mechanical, nicely balancing their non-human side with human emotions such as sympathy and self-preservation. A very touching if slightly melodramatic scene from the first game has been changed in this release, and its replacement does not feel as poignant. Fortunately, this is one of just a few minor changes that are actually disappointing.

The three main characters are not the only ones to populate the game, as there are two different alien species to interact with eventually. And while you don’t deal with them directly, the missing crew members are also more prominent, as you discover datapads scattered around the different planets that include journal entries and messages between them. It helps to see the relationships they had with each other and with Rachel, and it makes her reaction to their fates more realistic. Other than these added backstory details, the overall plot remains the same as before, including some philosophical questions about a sentient species’ right to live. And some questions still remain unanswered, such as why exactly Rachel was left behind on the probe.

All actions continue to be done either remotely through Mobot or directly through the probe’s onboard computer. The computer interface remains the same, including an overview of the ship’s different areas and functions (where you’ll initially need to make repairs to ward off impending disaster), a map of the solar system for scanning and traveling to different planets, a Mobot upgrade station, and a log of your goals, both current and completed. Apart from a few early restrictions, planets can be visited in any order, though ultimate success on one planet may depend on progress on another. Mobot’s interface has changed quite a bit, however. Instead of text choices of where to travel in a scene, full point-and-click exploration is now available. A collapsible overhead minimap in the bottom corner is also included for orientation, since there is more than one screen to explore on each planet. 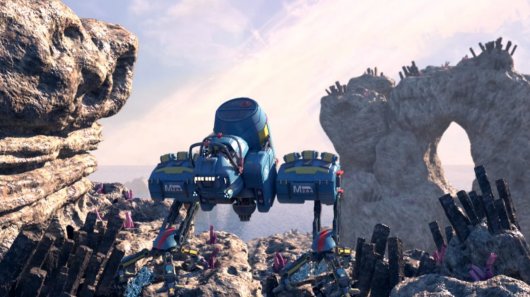 As you investigate, you’ll find many hotspots that Mobot, Julia, or Rachel can comment on, and there is now a button that shows all hotspots on the screen, which can be helpful to avoid missing anything in the far more detailed environments. If an object can be interacted with, left-clicking on it will bring up an option to examine, use or take the item. Most of the items collected by Mobot are not used as inventory (and those that are will be used automatically in the correct circumstances) but can instead be analyzed, a new function added in J.U.L.I.A. Among the Stars. Analysis is not always necessary to complete the game, but it helps you feel more like a spacefaring astrobiologist. Accessing new data about objects such as a laser gun or alien plant life offers more insight into these worlds and the events that have taken place. Usually analyzing objects is a straightforward process, but occasionally the process requires an added layer of puzzle-solving.

Some of the challenges have stayed the same, such as a multi-stage lights out sequence, a five-way tile jigsaw, and repeated circuit-connection puzzles to create upgrades for Mobot, such as going underwater or using a blowtorch. The addition of datapads means new puzzles as well, as each pad is locked and requires the correct combination. This can be done either through clues (some of them layered) found elsewhere or by using a code-breaking program, which resembles a fill-in-the-blanks game of hangman. Some challenges from the original game were slightly frustrating, such as the one where a shaky cursor had to be centered within a circle, and a math puzzle where fractions had to be converted to decimals, but these puzzles have now been removed or replaced. The Mass Effect-style planetary harvesting of the first game has also been removed, requiring just a simple probe scan now. Most of the original timed puzzles have had their time limits removed. The exception is one of the final obstacles that makes sense to be timed, but even if time runs out, there is no penalty and the scene will simply restart. Overall, the puzzles fit more naturally into the world than before, and each has a button for instructions to get you started.

Of course, the crisp, full-screen, high resolution graphics are the most immediately noticeable change in this enhanced edition. There are more scenes to explore in the planet stations, and even the rooms carried over from the original game have been expanded. There is so much more detail in the graphics now, from loose equipment lying around the medical bay to uneaten lunches in the mess room. The planetary diversity is emphasized even more now. The forest planet, for example, that was seen only briefly in small pictures in the first game is brought to life here, with vivid flora and fauna that were not present originally. An underground ice cavern that seemed stagnant before is spruced up here as well, now featuring impressive stalactites and lapping water. The color palette is often muted but quite varied, from washed-out blues under the seas to gritty browns of a barren desert, to the deep, foreboding greys of an organically mechanized world. 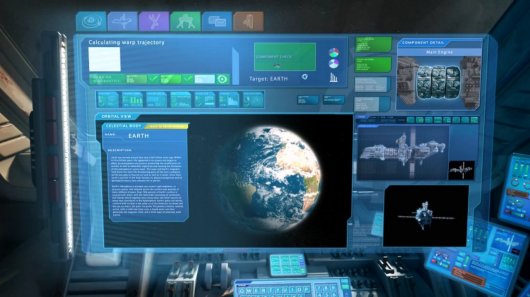 The probe’s computer interface has been graphically overhauled as well. It is now backed by a control room and a viewport that looks out onto the planet currently being orbited. There are a ton of small non-interactive graphs and buttons that really make the setting feel like a spaceship. Even the datapads include pictures of samples taken by the crew, and small details like these really help add to the realism. The update isn’t perfect, however. For example, at one point the text says a character raises their arms, while on screen they do not. And there are small subtitle and graphical errors, such as a line through a picture of rocks or an item remaining visible in a scene even though it has been removed. The cutscenes are more plentiful and even more breathtaking than in the original, and Julia now has a more lifelike face, which makes it easier to connect to her character. Her mouth does not move, but while this can be rationalized, even Rachel’s mouth isn’t in sync with her voice. The look of the aliens have changed completely, one of which appears suitably alien, like a kind of lizard-like sloth, while the other borders on corny.

The voice actors for Rachel and Julia have reprised their roles here. They both do a good job, improving on any flat-sounding dialogue from the first game. Mobot, originally voiced by a computer program called TextAloud, now has a proper voice actor. His voice is done well also, but I found myself missing the old artificial voice. A few lines are not spoken when they should be, and would be missed unless read in the subtitles. The music is much the same but didn’t need to be changed, varying from tribal chanting to suspenseful piano music with people whispering “silence” moodily in the background. It’s a soundtrack that really adds to the feeling of exploring the unknown.

With the addition of extra puzzles, exploration, and backstory, the remake is longer than the original game, taking me nearly seven hours to complete this time. It did crash on me at least five times in a specific area of the game, and with no autosaves recorded while you play, some manual saving is certainly recommended. Even with these setbacks, however, and a few small questionable design decisions, I very much enjoyed my second time around with Rachel, Julia, and Mobot, and am happy to recommend the game once again. Those who played the first version of J.U.L.I.A. will find the changes are mostly all positive, making it well worth a replay. It’s not enough of an upgrade to warrant a higher score than its already impressive predecessor, but make no mistake: J.U.L.I.A. Among the Stars is a better-looking, better-rounded, more enjoyable experience now. And if you missed it the first time around, don’t make the same mistake twice. This is a must-play for anyone who enjoys a good science fiction adventure, with gorgeous graphics and interesting puzzles to help the story along.

J.U.L.I.A. Among the Stars is available at:

More a slick refinement than a radically different game, J.U.L.I.A. Among the Stars largely took what it got right in the already enjoyable original version and improved upon it, then added some welcome new content on top.

GAME INFO J.U.L.I.A. Among the Stars is an adventure game by CBE released in 2014 for Linux, Mac and PC. It has a Illustrated realism style, presented in Slideshow and is played in a First-Person perspective.