The Land of the Seazogs review

The Land of the Seazogs

Almost from the time computers became powerful enough to move beyond 8-bit graphics, rarely have even the most “retro” pixel art titles dared venture further back than that. However, The Land of the Seazogs, by developers Manel Garcia and Abrahan Dopazo, eschews even that style as too high-res, instead utilizing 2-bit CGA-esque graphics for their debut sci-fi adventure. Yet look a little deeper and this deceptively simple visual presentation hides a classic if somewhat unevenly challenging point-and-click game set in a research station of the future, where various incredible discoveries are being made.

It’s to this station that the 164-year-old Doctor Meme travels at the behest of his old friend Gustav to help solve the latter’s ethical quandary over a mysterious new breakthrough. Gustav has been working with his clone Vasgut on a top secret project. Doctor Meme, the protagonist of this game, was responsible for creating Vasgut many years earlier. Meme is intrigued by the curious summons he receives and so hastens to the station on the planet Zerulia aboard a small ship. Upon his arrival, he is greeted by a spiky-haired coughing man named Simon, who informs Meme that Gustav hasn’t been seen in a week, before Simon himself falls into a deathly stupor in an elevator and then disappears without a trace.

As Meme, you will explore the station and meet a number of its quirky, too-long-isolated characters such as Jane, the author who has ensconced herself in her cabin waiting for inspiration to strike, and Bud, the head of security who laments that he’s had no real opportunity to test his weapons, lock picks, or other materiel. None of these people are concerned about the fates of Gustav or Simon, as Simon’s been known to vanish from time to time and it’s assumed Gustav is just taking a break somewhere. Meanwhile Vasgut, the clone, is initially unavailable as he continues working on his research. 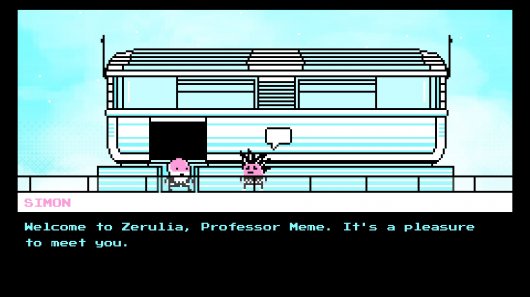 Seazogs follows an odd difficulty progression. Most adventures start in a confined area before opening wider and then narrowing down again. Here, however, almost from the beginning access is given to most of the rooms on the four floors of the station, with only a handful of new screens getting unlocked over the course of the story. Practically no direction is provided early on, meaning that the largely inventory-based puzzles are solved more because they can be rather than due to any specific reason, motivation, or goal Meme may have. For instance, it’s important to provide Jane with inspiration for her writing, but the means to do so are not apparent. Even after succeeding and she is willing to talk to you further, the benefit of accomplishing this task is not realized until much later. In essence, resolving this problem equates to performing a random act of kindness that emerges from the items accumulated in Meme’s inventory rather than some grand plan or forethought.

The lack of guidance early on makes for a challenging experience at first. However, as the game progresses and the various actions that can be taken at the time are completed, the later stages become much more linear. In fact, it’s only towards the very end that you will finally be given your first concrete goal. From there you are led almost to the finale through a very specific set of steps, which does help the game’s climax build up rather quickly. However, if you haven’t solved all the other seemingly side puzzles by then, you may suddenly face an obstacle that will require a great deal of backtracking.

The look of Seazogs is based on the “cool” colour settings of old 2-bit CGA graphics. All visuals are rendered using large block pixels of black, white, cyan, or magenta, though a few liberties are taken with lighter and darker shades of the four colours employed. The result is an aesthetic that evokes the feel of 2-bit CGA but actually has a bit more nuance to better detail the environments and characters. Even so, there are times when the large pixels and limited palette can make it difficult to tell what object is being depicted – Meme himself even comments at one point about not knowing what a coloured rectangle on a shelf may be – and many of the rooms in the station feel the same as there simply isn’t enough variety to make them stand out from each another. 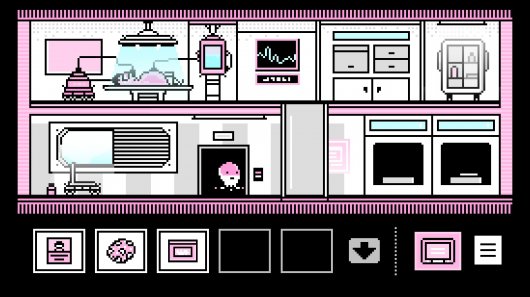 Fortunately, the instances of unrecognizable detail are largely mitigated by the game’s interface. Although Seazogs resembles an early eighties game, it isn’t controlled by keyboard but instead makes use of this more modern device known as the mouse. Gameplay occurs in fairly typical point-and-click fashion, with the cursor being context-sensitive. Throughout the adventure, a number of items can be collected and are displayed in an inventory at the bottom of the screen. From there they can be dragged into the current environment, where they are given a white outline over a hotspot onto which they can be dropped.

Whatever the interaction performed, Meme provides a text-only response that’s displayed where the inventory usually appears. The good doctor also records a number of journal entries throughout the course of the story as important plot points are uncovered. Most of the narrative is related via these journal insights as opposed to the actual gameplay or dialogue, though thankfully this isn’t the case with the well-executed finale.

As befits a science fiction game set aboard a research station, there are some interesting ideas touched upon, such as the control of diet, the benefit of meditation, and the treatment of aging, although none of these are explored in any great depth. The main story thread involves discoveries the research station has been making with regards to the native seazogs of the planet. (A seazog is a gigantic pink worm with a voracious appetite.) These creatures can occasionally be seen through the scattered windows and view screens, displaying a rather cute appearance that belies their bestial nature. 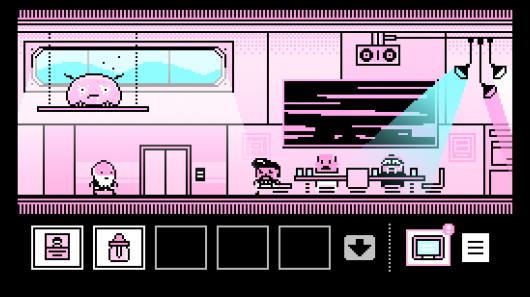 The research station on Zerulia is not a silent place, though most of the audio is ambient with the thrum of engines or the whir of air vents. These constant background noises are supplemented with specific effects like the whooshing of doors, the bubbling of water in a fish tank, and the <ahem> tinkling in a toilet bowl as Meme relieves himself. All sounds are quite well done and do a lot to establish an appropriate setting, especially when juxtaposed against the rather sparse visuals. Musically there’s not much on offer here, other than the very occasional short sting for certain key moments.

Despite the challenge of sorting out some of the early puzzles, Seazogs is still relatively short, clocking in at under three hours. While it doesn’t provide the ability to manually save, the game does continually record your most recent progress to a single save slot. Continuing from that save file doesn’t lose any accomplishments or inventory items already acquired, but it always returns Meme to the quarters set aside for his stay, which may require a bit of backtracking to return to where he was located when you quit.

While the intentionally ultra-retro minimalist graphics of The Land of the Seazogs may look obsolete, the puzzles and gameplay are anything but. The point-and-click interface works well and helps to identify those areas of interest that might be hard to decipher from the visuals alone. The lack of direction early on may be difficult for players more used to some degree of hand holding to start, but an engaging setting with no fear of death encourages experimentation. All told, there’s a fun little story here, inhabited by some quirky and cute characters, with enough intriguing ideas to satisfy those looking for a modest but nice little sci-fi fix.

Taking the retro look to a whole new level with its distinctive 2-bit(ish) graphics, The Land of the Seazogs is a fairly fun and challenging little science fiction point-and-click adventure.

GAME INFO The Land of the Seazogs is an adventure game by Manel García released in 2018 for Android, Mac and PC. It has a Stylized art style, presented in 2D or 2.5D and is played in a Third-Person perspective.

What our readers think of The Land of the Seazogs 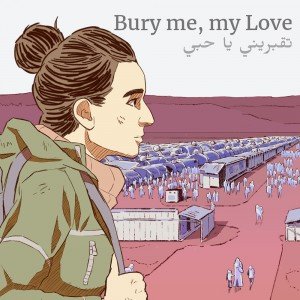