Nelson and the Magic Cauldron review

With the breadth of adventure game subgenres in recent years – from story games, to puzzlers, to first-person explorers and more – it’s nice to run into a good old-fashioned 2D point-and-click experience every now and then. Manuel Schenk’s Nelson and the Magic Cauldron fits that bill by placing its emphasis squarely on amassing and combining inventory in a faux 17th/18th century fantasy world filled with knights, barons, magic, and more fourth-wall-breaking than you can shake a stick at. While the humour falls flat, at least in part due to losing something in translation, the gameplay and general aesthetic are really kind of fun.

As the title would suggest, you play a man named Nelson who will find a lot of uses for a magic cauldron, although the latter doesn’t enter into the game until later on. At the start, Nelson arrives in a quasi-medieval village on a populated island. He announces that he’s used the last of his money to get there to claim the inheritance left to him by his deceased uncle Sid. If only he knew where Sid’s cottage was. The plot doesn’t actually evolve much from these humble beginnings, as subsequent events never truly coalesce into a solid storyline, instead serving more as a backdrop against which the puzzles can be placed.

Beyond the village, the island is dotted with a variety of other locations to explore, including a cemetery, windmill, castle, hospital, and of course the cottage Nelson is looking for. A quick travel map is not only helpful but necessary for accessing these places, as there is typically no way to walk from one to another. These scenes, and the characters that populate them, are rendered in a pleasing hand-drawn style that clearly reflects a labour of love from an indie developer. With clean cartoon lines it’s quite easy to tell which areas are interactive, but if that’s not enough there is a highlighter that can be used to temporarily show most available hotspots. 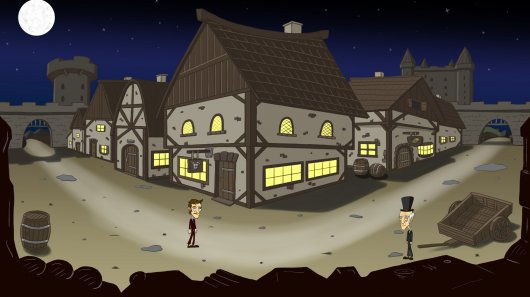 The majority of locales consist of only one or two rooms each. One notable exception is the castle, which late in the game requires manually walking through nine rooms – many of them bereft of anything interesting along the way – to reach a key destination. Nearly every place that can be visited has at least one character to talk to in them. The cast is a quirky lot and includes a witch, a baron opposed to HD graphics, a vegan zombie (a zombie who’s vegan, not one who eats the brains of vegans), a shepherd building a role-playing game, and the ghost of Uncle Sid himself.  A good number never amount to anything more than puzzle components, however, having no particular depth or backstory. Indeed, the game even has most NPCs knowingly commenting on how they’re simply there as background.

Nelson wants to be a funny adventure, but its level of comic success depends greatly on your tolerance/appreciation for fourth-wall-breaking humour. Many jokes are based on the game being self-conscious to the extreme. When a snail is squashed, Nelson is worried about the furor that will arise from animal rights activists when they hear a game would advocate such an action. Elsewhere, the protagonist encounters an acolyte who worships the man who created the game world and all the characters within it. When Nelson denies the existence of the creator, the unseen developer’s own hands appear with drawing tools poised to erase Nelson from existence. While this can be amusing at first, I found the constant reminders that I was playing an adventure to grow quite tiresome, as it seemed like the same gag being told over and over again.

To be sure, there are other types of jokes here as well. Unfortunately, the rest largely fell flat for me due to awkward localization. The game was written in German and later translated to English, with both subtitles and voices, but the lines tend to require a bit of parsing to understand them, which robs them of their comedic impact. The only times I found myself laughing were when the translations were just too absurd, such as a sheepherder responding with “mostly already except when I’m not at home,” when asked if he lives in the house right next to Nelson. 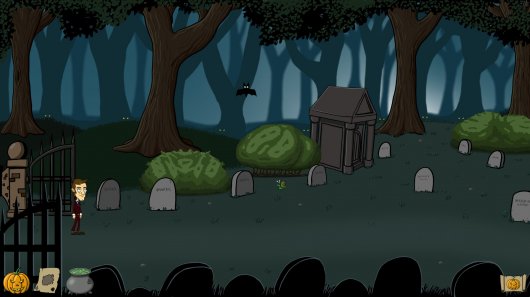 Humour aside, the focus of the game is on amassing and utilizing a wide array of items. The inventory can be toggled to display along the bottom of the screen by clicking a cauldron icon there. Acquired objects can be used within the current scene or on each other by dragging and dropping them. If the default inventory size of eleven items isn’t enough, another button can be clicked to expand it to display four such rows of objects at the same time. This can be useful when trying things on different items within the inventory.

Some of the puzzles are as simple as finding and using keys to open locked doors. Others require more creative thinking, such as when two halves of a ferry boat ticket need to be mended together. None of the puzzles are overly difficult, although it’s necessary to travel around the island a bit to find all the components. A certain amount of reading between the lines is also needed, as sometimes it seems like there are multiple things you could be doing when in fact there’s one particular task that needs to be achieved first, with no obvious causal link between the two. For example, at one point Nelson has to create a fake trophy for a man who lost his in order to get a critical item that Nelson doesn’t even know the man has. This is typical of much of the game, where it’s apparent from context what needs to be done but not what the reward will be, thereby making it feel like Nelson is acting without any motivation other than that he’s an adventure game protagonist and therefore needs to solve puzzles.

As the game progresses, Nelson gets access to the eponymous magic cauldron. By searching around the island, various spell recipes and their ingredients can be found. Without exception, each spell requires two ingredients that must be placed in the cauldron in a particular order. Such potions include raising the spirits of the dead, sobering up drunks, and helping to cure writer’s block. At a fundamental level, creating these is nothing more than an extra inventory combination puzzle and yet there’s still something satisfying about putting them together and seeing what happens. 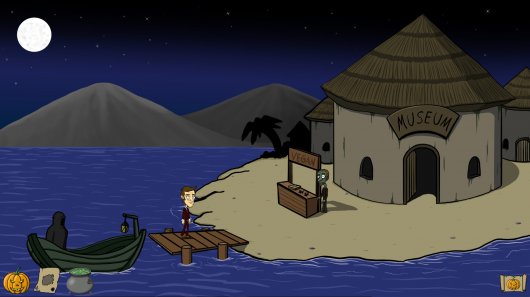 The audio is where Nelson really falls down. All of the characters are fully voiced but the recordings leave a lot to be desired. Breath pops abound and most of the line readings have an echoey quality that makes them sound as if they were recorded in a tiled bathroom. On the plus side, they are presented in stereo, with voices coming from the left or right speakers depending on where characters are standing. As for the performances themselves, the actors do their best but there are some spots that trip them up, such as when Nelson refers to vee-gan, vech-an, and wee-gan zombies within the span of three lines. Even so, there’s something rather quaint about having all the characters portrayed with authentic German accents. As a result, even with all the objective technical issues, I found the voices enjoyable to listen to.

Musically Nelson is a little trying, however. Much of the time there is one twenty-second tune that plays on a continuous loop, which started to drive me loopy after a few minutes of listening to it. Apart from that there are occasional riffs that play at key moments, such as at the start of the game’s three chapters. The music volume can be controlled independent of the voices, at least, and can even be turned off. More variety would definitely have been appreciated to avoid that temptation. As for sound effects, they’re probably the best of the audio offerings as they fit the actions performed on-screen and feature none of the recording issues afflicting the voice-overs. 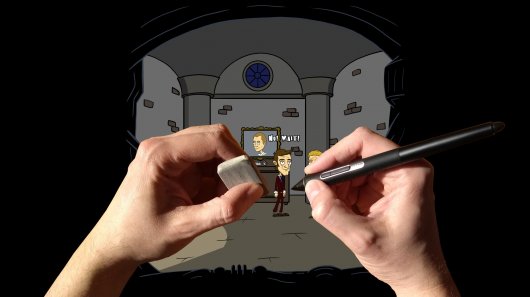 This isn’t a particularly long game, coming in at just under three hours. Surprisingly for a game so short, I was delighted to see that Nelson provided a full and proper save system, allowing multiple manual saves, though with no dead ends or ability to die, there is no pressure to save early, save often.

In the end, Nelson and the Magic Cauldron is something of a mixed bag. Visually it’s quite pleasant with its simple but clean hand-drawn art style, but it looks better than it sounds given its repetitive music and poor recordings, though the accented voices have a charming quality all their own. While the intended humour doesn’t really work, the localization does lead to some oddly funny and absurd moments (especially if you’re only familiar with the American definition of the word “commode”). Puzzle-wise, the protagonist has little motivation for his actions, and yet I found the challenges themselves quite satisfying to solve. All in all, the game is too rough around the edges to be as good as it could be, but still manages to provide enough enjoyment to overcome its shortcomings. If you’re in the mood for some inventory puzzle fun, this quirky little concoction may just quench your thirst for the few hours it takes to complete.

Though it suffers somewhat from a lack of polish, Nelson and the Magic Cauldron is a fun, if not necessarily funny, inventory-filled point-and-click experience.

GAME INFO Nelson and the Magic Cauldron is an adventure game by Manuel Schenk released in 2018 for iPad, iPhone, Linux, Mac and PC. It has a Stylized art style, presented in 2D or 2.5D and is played in a Third-Person perspective.

What our readers think of Nelson and the Magic Cauldron