Have you ever wanted to step into a Hieronymus Bosch painting and participate in an inter-dimensional war where the fabric of space-time hangs in the balance? Even if the thought never occurred to you, now you can as aliens, magic, beasts, and the Middle Ages collide in Lupus in Fabula, a bizarre and somewhat subversive puzzle adventure. To say this side-scrolling, European-style game is unconventional is an understatement, as it is a quintessential embodiment of the type of surrealist humor that permeates Monty Python and the early Doctor Who. With playfulness and high culture inspiring every scene, this game provides a high-quality, thoroughly enjoyable experience.

Lupus in Fabula, an independent title created by the one-man studio Spitoufs, puts you in the boots of a man known only as ‘The Leper’, accompanied by a bulky horned creature with enormous black eyes named Horatus. Both of them, we soon learn, are creatures displaced in time and space, and they have attracted the attention of the philosopher Voltaire and the painter Tiziano, who are overly concerned that the Leper’s actions may be unraveling space-time as we know it.

If that paragraph just made you do a double-take, it's only a gentle introduction to the mad world unveiled within the game itself: Tiziano and Voltaire, who were not contemporaries but rather born roughly two hundred years apart, are merely the guises adopted by a pair of inter-dimensional aliens traveling through time, and they are involved in a cat-and-mouse chase with a powerful party responsible for the fracturing of the regular space-time continuum... and they suspect the culprit might be you! You, in the meantime, are busy hopping from one puzzle to another in a succession of scenarios and strange environments as the story is slowly revealed in the transitional cut-scenes. 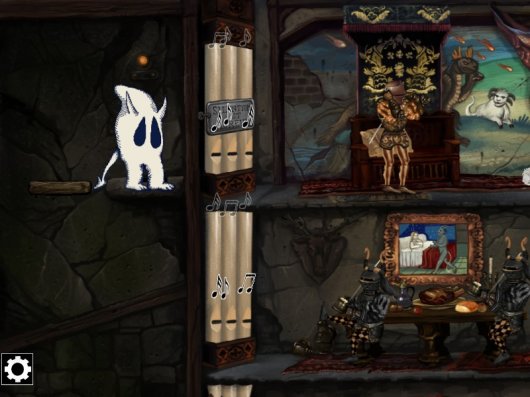 The Leper and Horatus are essentially mute characters the majority of the time, with the bulk of conversation and exposition being shouldered by their alien shadowers. It is during these exchanges that the game shows off its Pythonesque comedy, when it contrasts 'Tiziano' as a goal-focused if somewhat inept and easily frazzled man versus 'Voltaire's' laid-back hedonism that makes him prone to getting distracted from his primary objective. The dialogue is often snappy and light-hearted, although one becomes keenly aware of translation issues the moment the plot tries to address the more speculative subjects, resulting in some stilted passages. Considering the surrealistic nature of Lupus in Fabula, however, one could make the argument that this only adds to its charm.

Our main protagonist, the Leper, only truly speaks at the very end of the game when his identity is revealed in a rather amusing coup de théâtre. Fortunately, secondary characters are colorful and outré, ranging from the avian emissary of death to a surprisingly cultivated monster that has a long-standing feud (and flirtation) with the Archangel Gabriel. Most of these are played for laughs and receive little to no further development, but their roles are in keeping with the narrative premise and tone. Conversations are conveyed solely through text, as there is no voice acting at all.

Mechanically the game is designed as a side-scroller, and there is a fair amount of jumping from platform to platform in order to get around, but there are no puzzles that rely on timed jumps or dangerous leaps of faith. There is no mouse input, so all commands must be accessed via the keyboard: you move using the directional keys, with ‘up’ triggering the jump. Separate keys also serve as the ‘use’ command, switching inventory items, and kicking/punching. The configuration works well enough, although I found that sometimes the game did not register the command to jump while my character was moving along a descending ramp. 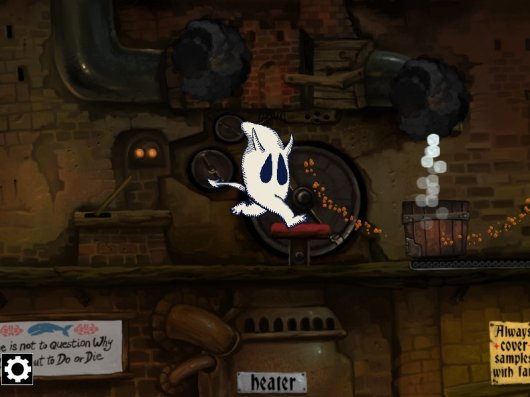 The Leper and Horatus have a very straightforward division of labor reminiscent of Cocktail Vision's Gobliins 2. The former is intelligent and can carry and manipulate objects but is relatively weak; the latter (who has no hands) can’t hold any objects, but he is an extremely strong brute who can perform powerful kicks. The Leper can carry several objects and cycle through them, and the game often displays a hint as to the purpose of each item when you first pick it up. You can switch between characters with a keystroke at will except for scenarios in which one of them is incapacitated. The nature of most of the puzzles requires Horatus and the Leper to focus on the same task, though a few cater to each’s individual attributes and must be solved by them alone.

The levels themselves are fairly small, and the puzzles you’ll encounter never reach the head-scratching degree of obscurity for which other idiosyncratic puzzler franchises are famous. Often the objective of each scenario is obvious from the start, such as finding proper burial for an unfortunate dead man, but in order to take the corpse to its final resting place, our heroes will need to scare an enormous serpent out of its cave, revive someone who has fainted from shock, and restore offerings to a shrine. This sequence of events may sound disjointed, but they make perfect sense in context. Even if you become temporarily stumped by a particular puzzle, close observation and a good amount of fiddling about with the environment and objects will eventually reveal the right set of steps to take.

In both puzzle design and atmosphere, Lupus in Fabula does not shy away from the macabre, treating it with the same kind of irreverence as everything else. A few situations involve the manipulation of cadavers, and one stage requires you to sabotage the sadistic endeavors of a positively gigantic noblewoman who towers over the level. With the pull of a lever she sends hapless people to their deaths for her entertainment, while with another she summons a morsel to eat once the deed is done. Another tableau has our heroes arriving in a hellish landscape where the souls of the dead are constantly being ferried into an open furnace for their eternal punishment. 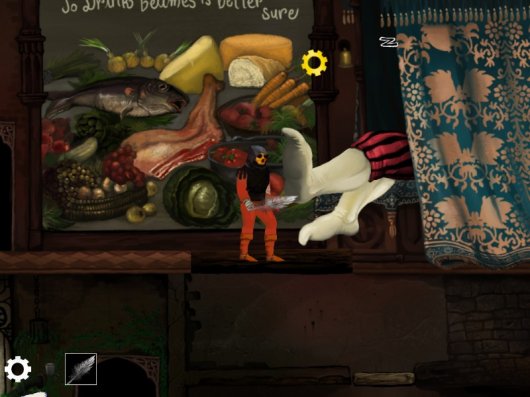 These gloomy scenarios could be shocking, perhaps, were the game not rendered in an attractive visual style that includes a surprisingly effective mixture of medieval iconography with the Flemish school of painting. These elements are similar to the animated skits featured in Monty Python. Every scene, from hellscape to dungeon to Elysian field, is appropriately rendered and remains vivid and distinctive. The only drawback to this style is that occasionally it is difficult to differentiate between an element of the background and something with which our protagonists may be able to interact, but this never becomes a major impediment – the game manual does encourage players to explore and try everything, and the map sprawl is so small that this is not in and of itself a major time sink.

It is possible to die in some levels, and the death of either character is an immediate fail-state, at which point you must try the stage again from the start with all progress reset. You can also find yourself trapped somewhere within a level because you either accidentally walked off an elevator, leaving you stranded, or because you completed the objective and sent one of your heroes off to the portal to the next level... only to realize that you've left your co-protagonist stranded without a means of joining you. Lupus in Fabula is stable overall and bereft of any significant technical issues, with one notable exception for me where the solution to a puzzle was not working even though I had followed all of the required steps to bring it to completion – fortunately this was solved by switching over from my downloadable version to the Steam release. 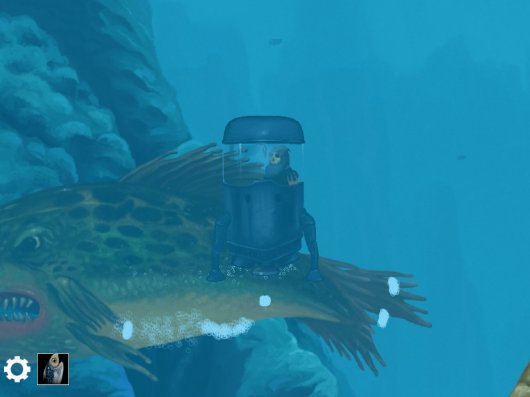 Musically, the game possesses a diversified score that shifts according to the circumstances: the opening screen bombards you with a jaunty and disjointed theme, but more often than not the different levels are accompanied by soundscapes that heighten the mood of their respective scenes with a minimalistic approach. Important events and developments are marked by more distinctive melodies, such as the fast-paced electronic tune that erupts the moment the fight between the Archangel Gabriel and the monster begins. Sound effects, while also of a limited nature, are provided with an ear for the darkly satirical tone of the game, and thus none of them truly feel out of place.

Lupus in Fabula is a rare kind of game – the kind that manages to be erudite without being pedantic or off-putting, whimsically surreal without feeling completely random. With a regular playthrough clocking at around 7-10 hours, those who are accustomed to greater depth and complexity of puzzles and meatier stories might find in this lite offering a drink that is not altogether satisfying, but it is such a charming, quirky and unusual thing that for everyone else it would be a shame to pass on such a memorable and unique experience. Ergo, bibamus!

Although light in puzzle complexity and narrative depth, the side-scrolling Lupus in Fabula delivers a memorable experience that has much to delight. Its characters, panoramas and irreverent, absurdist comedy come together to create a farcical adventure that is quite distinct and helps it stand apart from other offerings in the marketplace.

GAME INFO Lupus in Fabula is an adventure game by Spitoufs released in 2016 for Mac, PC and Linux. It has a Stylized art style, presented in 2D or 2.5D and is played in a Third-Person perspective.

What our readers think of Lupus in Fabula