I love a good video game story – it’s why I’m here writing at Adventure Gamers, after all – and that includes narratives that require careful interpretation and thought to enjoy to their fullest. I don’t mind spending a day or two after finishing a game to process and digest its experience. But it’s been several days now since I completed Tangentlemen’s moody VR horror-thriller Here They Lie, and I still feel no closer to sussing out its true meaning. At this point, it will simply be cemented in my mind as best as I understood it, regardless of how right or wrong. Either way, due to its bland, paper-thin gameplay, this Sony exclusive’s cerebral ambiguity might be its most noteworthy feature, along with the thoroughly surreal city in which it’s set.

Here They Lie is one of a growing number of slow-paced first-person games that don’t task the player with much beyond moving through its virtual world and simply experiencing it. (The added immersive dimension of the PSVR headset is just icing on the cake.) Beyond a handful of times when you are required to push a button to interact with something highlighted in the environment, walking and occasionally running forward is all that’s involved in playing this game. Most of the locations offer interesting designs, at least, and there is some variety to the “move forward” gameplay introduced as you sneak past enemies that will react to your proximity by swiftly killing you.

Still, the journey here is intended to be much more cerebral than physical. It seems to start on a familiar beat: Players slip into the role of Buddy, a man returning to a city he left behind in order to find and be reunited with the woman he once loved, Dana. Why Buddy and Dana broke up is never fully explained, only hinted at in the vaguest of terms, as is the reason why the city seems utterly deserted save for the eerie apparitions that haunt its darkened alleys early on, as well as some masked humans after delving deeper into its sordid underbelly. 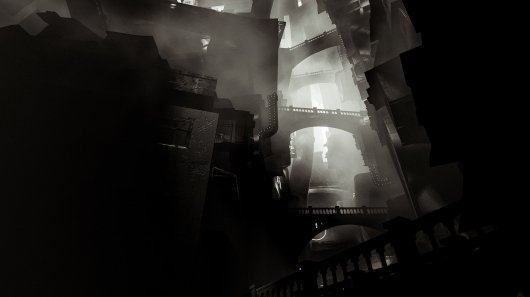 Over the course of the game’s three or four-hour runtime, several theories formed in my mind about Buddy and Dana’s past relationship and what happened to drive them apart, and more importantly, about the significance behind the ruined and blood-drenched railway tunnels that Buddy is forced to navigate at several points. Not to mention the thirty-foot-tall man dressed like a fifties-era insurance salesman but wreathed in flames, who chases him on several occasions. Each time I thought I was making some headway with my interpretations, a new event or setting would completely fly in the face of it, and the final choice between two endings caught me so far off the rails that making sense of anything barely even seemed to matter anymore.

Instead, this is all about the moment-to-moment experience, absorbing sights and sounds that are so stuffed full of symbolism, so allegorical, that they can’t possibly make a lick of sense to anyone but the mind that conceived them. Fortunately, considering the game’s brevity, this sense of complete and utter confusion doesn’t end up smothering you with frustration, lasting just long enough to facilitate a constant steam of wonderment. It’s a bit like Alice’s trip through Wonderland, with new oddities and peculiarities to gawp at every few moments. Whether stumbling onto a sort of gladiatorial battle arena in the sewers or witnessing a bizarre simulated sex act between two animal-mask-wearing men and a television set, it’s safe to say that Here They Lie provides at least a few one-of-a-kind moments.

The city itself winds up being the game’s most pronounced character, with some interesting evolutions as Buddy keeps plunging down that rabbit hole. The early sections are perhaps the only ones that genuinely feel like something out of a horror game. Though the trek through it is fairly linear, the city is a labyrinth of twists and turns, forcing you through ever-darker bowels of concrete and metal. As buildings literally stretch skyward around you, the path slowly descends, doubles back on itself, and drops some more. What begins as a journey through a ruined metropolis that’s disquieting in its expansive desolation soon turns into a claustrophobic nightmare, walls pressing in on every side as pipes and metal girders begin closing off the barely-visible sky far, far above. 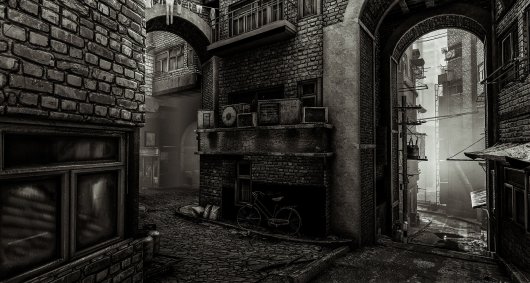 The adventure continues to take interesting turns, sending Buddy through an urban version of hell on earth, including such locales as a red-light district alive with degenerate displays of bizarre fetishisms and thinly-veiled social commentary, as well as a dark reflection of a suburban neighborhood, really a drawn-out stealth section crawling with the game’s gibbering monstrosities. None of these locations ever tell a clear narrative, though some small attempts at context are made through phantom phone calls Buddy receives from a long-ago friend of his. However, taking this ride through all the diverse settings is certainly an experience in and of itself, and the game’s most memorable feat.

As could be expected, the city looks intentionally unwholesome, though it’s difficult to get a sense of the visual impact based on screenshots alone. Nearly all of the environments are depicted in a weirdly blown-out, sepia-toned monochromaticism, with some notable pops of color here and there. Red is used to bathe certain areas and monsters in crimson, while Dana’s dazzlingly bright canary-yellow dress becomes a solitary beacon of goodness in this otherwise hopelessly muted world. But drab is really the game’s mantra, at least when you can see your surroundings at all; the presentation isn’t shy about covering its scenery in thick blankets of darkness. You do have a flashlight to illuminate the way – provided you’ve not run out of batteries for it – but this merely reveals what there is to see, without adding any additional color whatsoever.

Although Here They Lie can be played regularly on your TV screen, and the VR headset further muddies the graphical fidelity, experiencing this game in virtual reality is really the best way to be sucked into its oppressive world and preyed upon by its scares. Each area features masked, bizarrely twisted humans shuffling around on all fours, or hulking brutes acting as enforcers and sweeping the streets in search of victims, all of which must be avoided. Lacking combat or any other way to defend yourself, survival boils down to stealthily sneaking past foes or running like hell once they’ve noticed you, trying to shake their interest. The horror doesn’t last very long, though; any fear loses its bite after a handful of deaths, as dying merely respawns you behind one of the many dead-end doorways around the nearest corner. After the thrill of the first few encounters, enemies don’t add a whole lot to the experience, and by the final chapter – a gauntlet of stealth sections – you’ll find yourself just getting more and more annoyed by their presence. 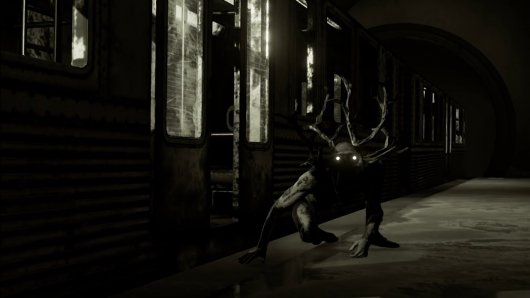 Here They Lie offers full 3D movement within its virtual world, letting you turn in blinking intervals in VR, with finer adjustments to movement trajectory also made by turning one’s head left or right while walking. This, understandably, has led to numerous reports about motion sickness, though thankfully my stomach only lurched a handful of times, one of which happened at the game’s main menu screen when I unexpectedly sank through the floor when starting up a new game.

Despite its lack of player agency, the world that has been constructed here is a unique and somewhat interesting place. It submerses you – almost literally – in the depths of its ruined environs, at first giving you glimpses of daylit sky as a refuge, but quickly taking even those away. The sound design generally helps with this immersion, consisting heavily of ambient noises and the unsettling cries from its creatures. Only Buddy, Dana, and the occasional friendly phone caller speak a comprehensible language, fully voiced, but neither the spotty performances nor the actual content of the dialog provide any greater understanding of the story than the guttural ululations of the various monstrosities. Picking up and examining various photographs – the game’s collectibles – also triggers soundbites of unconnected philosophical ramblings that honestly just seem far more pretentious than they're worth.

In the end, whether players enjoy their brief time with Here They Lie may just depend on how much stock they put into actual gameplay, limited here to a few instances of “open the door” or “avoid the enemy.” The story is similarly threadbare, though its surrealism can work to the game’s favor. The world here certainly isn’t a pretty one, but this accursed city is intriguing in its grim design, and being able to interpret the narrative freely makes for an intriguing thought experiment. I suppose that’s what this game feels like the most – when the excitement of first-person VR scares wears thin, something else is there to engage the brain in a different way, even in the absence of puzzles to solve. It’s hard to unreservedly recommend, but for those who can appreciate style over substance, there’s enough to the experience that it will surely find an audience.

Here They Lie seems like a game made for a very specific type of player who values experience over challenge or even clarity, and thus will leave many gamers cold and nonplussed at its exotic design decisions.

GAME INFO Here They Lie is an adventure game by Tangentlemen released in 2016 for PlayStation 4. It has a Illustrated realism style, presented in Realtime 3D and is played in a Third-Person perspective. You can download Here They Lie from: We get a small commission from any game you buy through these links.
The Good:
The Bad:
The Good:
The Bad:

What our readers think of Here They Lie