David Slade Mysteries: Memories of the Past

Don't let its self-proclaimed "stoner noir" label fool you: There's a lot more going on in Convict Games' short but deeply enjoyable STONE than meets the eye. Sure, it wears its many influences on its colorful sleeve, but beneath the surface lays a story grounded in broken hearts, personal turmoil, and regret. There are even some late twists/reveals that cement the game’s place among the more thoughtful and emotionally charged adventures in recent memory. There are some genuinely funny moments sprinkled throughout the experience as well, though don’t expect copious amounts of marijuana-related hijinks. You can chat with a rubber duck and a toaster named Nigel, but these are just small stops along a winding and fascinating journey, albeit one that is noticeably devoid of actual gameplay along the way.

The plot follows an emotionally distraught koala named Stone, a private investigator who receives some very unpleasant news early one morning. It seems someone has kidnapped his artist boyfriend Alex (who is a bird, by the way), and this shocking revelation sends Stone's world into chaos. Despite his best efforts, he can't seem to figure out who abducted the love of his life or why. However, the deeper he digs into the case, the more secrets begin to bubble to the surface, leaving Stone to piece together some very unfortunate truths about his life and his seemingly perfect relationship. Without saying more, the case soon becomes a personal journey that makes him re-examine some of the things (and people) in his life he foolishly took for granted. While this might sound heavy, however, the presentation, voice acting, and witty dialogue keep it from becoming yet another run-of-the-mill yarn about a lost soul left all alone.

Adventure game fans shouldn't go into STONE hoping for an epic tale full of challenging gameplay. This is more of an interactive cartoon than anything else, as there aren't any puzzles to complete or characters to win over by carefully maneuvering through dialogue. Instead, you guide the titular protagonist through a handful of conversations tucked within less than a dozen different environments. You'll spend a lot of time going back and forth between Stone's cluttered home, his favorite dive, the exterior of a bowling alley, and a techno club owned and operated by an alligator. Backtracking is the name of the game here; there are only so many characters and places to visit, and each time Stone discovers something new about the kidnapping, he heads back to his small group of friends to pick their brains – or berate them. 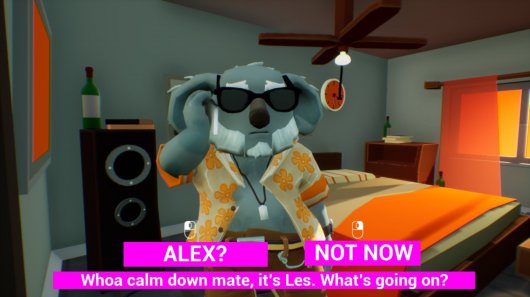 This game isn't too far removed from other like-minded, third-person 3D adventures on the market, so you’ll navigate this world from your typical behind-the-back perspective. Whenever you encounter something that catches Stone's attention, which highlights via on-screen text, pressing a key (or button if you're using a gamepad) will activate that hotspot. On occasion, an alternate key or button will serve as a way to engage in unique actions, depending on your location, but for the most part this is a truly one-button affair. Both the keyboard and gamepad controls are simple, refined, and easy to handle, but then again they don't require you to do very much. Overall, STONE is very straightforward in terms of game design. What's more, the story benefits greatly from it, as anything overly complicated or convoluted would have dampened the tale's overall impact, though I wouldn't have minded if there was a little more for players to do.

Although STONE doesn't offer much to interact with, the narrative itself keeps the experience from becoming stale and repetitive. Despite his burly demeanor and tendency to yell every word he utters – including a fair amount of foul language – you end up developing a pretty deep emotional bond with the poor protagonist; he's so miserable that it's often difficult to hate him. Even when the story takes a pretty dark turn in the final chapters, you kind of feel sorry for the state of Stone's life and how his decisions have lead to this point. Thankfully, the game ends on a much-needed high note (stick around after the credits), and I wouldn't have any complaints whatsoever if the developers decided to revisit this character down the road.

As for STONE’s many obvious influences, there are nods all over the place to hip-hop music and cult movies, particularly The Big Lebowski, but it even goes one step further as you can head to our hero's local theater or sit down in front of his living room television and watch feature-length public domain movies, including Night of the Living Dead and The Cabinet of Dr. Caligari, among others. It's very clear which flicks inspired some of the dialogue and events here (including a Dude-inspired moment involving some paid thugs and a case of mistaken identity), though sometimes these scenes are a little TOO on the nose. I'm all for homages, but when you essentially lift an entire scenario and rejig it to fit your story, it cheapens the work as opposed to enhancing it. There are countless ways you can show your love for the Coen brothers' late ‘90s masterpiece without being quite so obvious about it. But, then again, some people love that stuff. 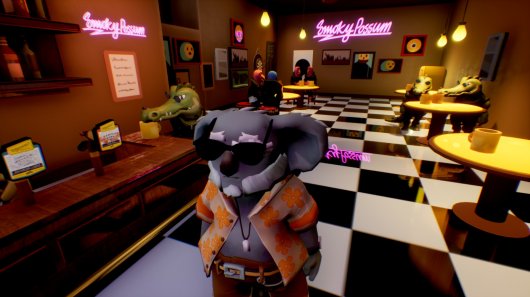 While these pop culture references and in-game films are nice distractions that demonstrate the developers' love of cinema, they don't really add anything to the game as a whole. The same rings true for the ability to light up a smoke or dance to whatever techno song is blasting in the club – these are cute little ways to kill some time, but they don't contribute much to the gameplay experience. I would have gladly traded these throwaway gimmicks for a few more locations to explore and characters to chat with instead. Does grabbing a drink at a bar or changing the tune on a jukebox really impact the game? Not really. It offers some much-needed interactivity with the environments since there aren't any puzzles to solve, but they seem more like pointless filler than anything else.

It's clear right from the get-go that STONE's biggest selling point is its bold presentation. The game looks like a three-dimensional Adult Swim cartoon (that's a compliment), which kind of makes the limited number of locations and characters so frustrating. I wanted to see more of Stone's strange world and converse with the kooky people who inhabit it. While the settings themselves are kind of bare bones and functional, the atmosphere is enhanced by a wonderful soundtrack featuring indie rap and rock bands that helps bring them to life. The characters, all of whom are anthropomorphic animals reminiscent of director Wes Anderson's adaptation of The Fantastic Mr. Fox, belie their simplistic appearance with sharp, well-written dialogue and solid voice work that make them an absolute joy to engage. Did I mind that Stone's best friend bears a strong resemblance to John Goodman's Walter Sobchak? A little, but again, the performances push these minor complaints to the background.

Although it's disappointingly short (I finished up in around two hours), STONE offers a fantastic story that transcends the cartoony aesthetic and so-called "stoner" mentality. Yeah, it's funny, random, strange, and more than a little silly, but there's a heart beating just below the surface that powers an emotional undercurrent flowing through the entire game. If only the experience offered more in the way of actual gameplay, it would have been even stronger for it. As it stands, STONE offers a solid experience for a lazy weekend afternoon when you want to turn off your brain, kick back, and let the wacky and mildly distressing adventure of the world's loudest koala detective help you pass the time. I certainly hope this isn't the last time we'll hear from Stone, as the character has so much left to offer the world.

STONE is available at:

Although disappointingly short on actual gameplay, the funny yet surprisingly touching STONE is one of the most engaging and enjoyable bite-sized adventures of the year.

GAME INFO STONE is an adventure game by Convict Games released in 2018 for iPad, iPhone, Mac, PC, Switch and Xbox One. It has a Stylized art style, presented in Realtime 3D and is played in a Third-Person perspective.

What our readers think of STONE