“Calm down. You are here because you’ve chosen to remember,” insists the narrator of Path to Mnemosyne, thrusting a little girl who’s lost her memories into a monochromatic land of sketchbook meanderings taken physical form. This is an experimental “infinite zoom” puzzle game in which you maneuver the silent protagonist through a continuous, sometimes labyrinthine corridor while interacting with the environment to unlock the way forward. The unique premise and attention to disorienting, dream-like world detail are enthralling, though the thin story is highly abstract and sometimes the design succumbs to the drudgery of common puzzle tropes.

I actually wouldn’t go so far as to say there is a story in this game, but rather a thematic idea weaving together the gameplay and presentation. You must help your young avatar reclaim her memories, whatever they may be, and yet two narrators work in opposition, embodying the concepts of remembrance and forgetfulness. Amongst the terminology used, you will hear the names “Mnemosyne” and “Lethe” come up often. Without getting bogged down in trivia, it bears mentioning that Mnemosyne is pulled from Greek mythology, being a Titan representing memory. Contrarily, the river of Lethe is the embodiment of oblivion – the void of memory.

The small amount of voice acting effectively adds some character to an otherwise solitary affair, even if it is only cryptic narration that does little to bestow context. Expect eyebrow-raising lines such as: “These memories must not be on her anamnesis. She will be back to Lethe.” A woman in a row boat, a pack of rabid dogs, a mound of corpses; the images you acquire at the end of each area amount to an illusion of meaning which, even upon reflection, lacks any ounce of clarity. The vague efforts at story seem to exist solely to feed the imagery and inject a semblance of purpose to your adventure rather than provide any real answers. An hour and a half should see you to the conclusion, where two abrupt and still-ambiguous endings await. 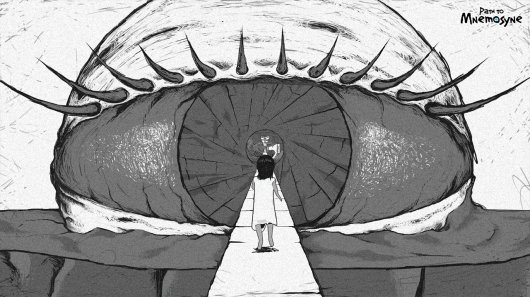 The minimalist graphics are sketch-like with a noise filter overlaid, presented largely in black and white with a very selective use of color. Each zone has its own intriguing motif, whether a composition of human facial features including noses, ears and eyes, or maybe the bizarre marriage of honeycombs, skeletons and cockroaches. As a whole, the abstract aesthetic comprises a collage of randomly plucked elements, sending you through a passage of organic and inorganic matter. Transitions from one strange region to the next are seamless, though perhaps not as fluid as desired since there is a very slight stutter at times. This little snag really isn’t too obtrusive, though, and the overall animation along with the texture of the graphics, which have the appearance of drawings on paper you could almost reach out and touch, are consistently impressive.

As refreshing as the artwork is, Path to Mnemosyne shines its spotlight on puzzle solving within an ever-changing setting that is a puzzle in itself. Besides some brief but mandatory backtracking on occasion, you continually run toward the horizon, away from the camera, wondering how far you’ll go and past what unusual spectacles you will be taken. Scenes marked by left- and right-facing arrows give you the ability to shift sections of the environment clockwise or counter-clockwise, typically to bridge a path along the way.

Complicating your route are pressure plates on the ground that either act as switches or platforms to teleport you to set locations; hopefully you have a reliable memory to keep track of which plate sends you where. In other instances there will be a row of plates to step on, which lights them up – the challenge here being that each one you walk over lights and dims other nearby plates, forcing you to figure out the proper order of activation. Sound also comes into play when you are required to replicate a short melody by using the plates like the keys of an instrument. Thoughtfully, for the hearing-impaired you can also just memorize the order in which the plates illuminate to the melody. 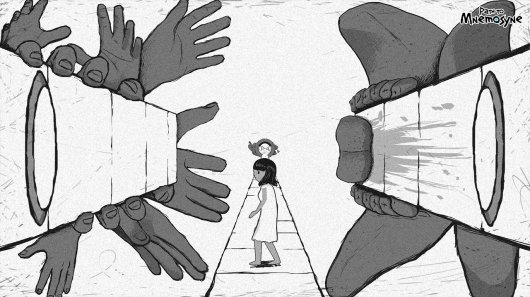 Controls don’t get much simpler, with arrow keys or WASD for movement, space bar to jump, and the mouse to target and drag objects during select puzzles. With the camera placed behind your character, you are given only four options for movement. It is necessary in some cases to avoid activating certain plates by hurdling over them, which will test your timing but to a forgiving degree. There aren’t any hazards to trouble you, so even if you accidentally trip a switch you can deactivate it without worry. When the mouse is needed for puzzles, a cursor will appear. One particular puzzle is based on correctly timing your clicks, with others having you spin an object around to match a pictured solution or connect dots as if forming a constellation.

Structured in such a manner that you solve smaller puzzles in order to access the door to the next zone – with each door presenting its own exclusive puzzle before granting you passage – the plethora of tasks are well implemented with steady variety. However, many puzzles will give experienced adventure gamers the distinct feeling of déjà vu, as you've probably encountered them before. Additionally, managing a maze of portals, while spanning only a portion of the game and being less intimidating than it might at first appear, becomes rather mind-numbing. What remains impressive, however, is the amount of information the game conveys about its puzzles without the need for a hint system.

Excluding the tone-setting notes of the title screen and the unexpectedly uplifting piano and string arrangement during the credits, Path to Mnemosyne chooses not to distract from its sparse sound design, an approach that makes a lot of sense when considering the application of music-based puzzles. The acoustic echoes of your footsteps and heartbeat take prominence but when pressing forward for an extended period you hear a swelling sound, as of someone gradually cranking the volume, which simulates the slow build of tension before a jump scare in a horror movie, only minus the scare here. Ceasing when you let go of the movement key, and playing in reverse when you run back toward the camera, it’s a nice detail that adds to the impression that you’re in a dream where something awful is perpetually around the corner. 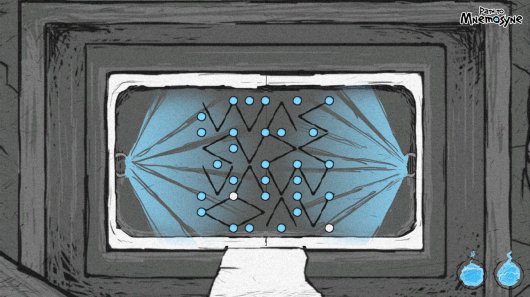 Without a doubt, the disorienting perspective creates a novel experience, but the shifting environment and zooming camerawork may cause queasiness. Personally, I had to take breaks every so often, but I admit this isn’t the first game to have such an effect on me. However, first-person games that require a lot of quick movement are the usual offenders, and even then only on rare occasions, which is why I was surprised to encounter any problems in this case. I believe the primary cause is the vertigo-inducing way the background rushes toward you like you’re falling into a pit, creating a similar sensation to the “dolly zoom” technique used in films. Since I can’t rightly blame Path to Mnemosyne for my shoddy equilibrium, consider this merely a disclaimer targeting those who suffer from motion sickness.

For all the debate about “reclaiming memories”, I ended up feeling like I was promised something that wasn’t fulfilled narratively. Path to Mnemosyne takes the liberties of suggesting a deeper message but in actuality there is not much more than the satisfaction of solving its puzzles. To be clear, this isn’t so grievous a fault as to tarnish the experience, as there is nothing wrong with a game strictly focused on puzzles, but a little more clarity would certainly have been welcome, and if there were more originality in the composition of certain obstacles, higher praise would be in order. Nevertheless, the passion put into this title is unmistakable, from its offbeat presentation to the graceful implementation of its series of challenges. It’s compelling while it lasts, but only time will tell if it sticks in your memory or is left wallowing in the waters of forgetfulness.

Uniquely enigmatic but occasionally tedious, Path to Mnemosyne creates a dizzying world of alluring visuals to fill with a generally gratifying collection of puzzles based on observation, memorization and timing.

What our readers think of Path to Mnemosyne