The odd-couple trope has seen its share of adaptations in the adventure genre over the years. Who could forget the many bizarre adventures of Sam & Max, or the whacky combination of Drew Blanc and Flux Wildly in Toonstruck? The first episode of tiny & Tall: Gleipnir introduces the titular protagonists to this list of comedy duos in a very funny, visually charming adventure based upon a real Nordic legend. Although the game suffers from a few oversights, most notably a flawed English translation, I would still recommend it to lovers of point-and-click adventure games.

The tale follows two Dwarven blacksmiths tasked by the Aesir (the Norse gods) to forge Gleipnir, an unbreakable chain capable of binding the great wolf Fenrir who’s threatening to devour the world. These not-so-Dwarven-looking smiths are of course our heroes, the happy-go-lucky, thumb-like tiny and his bossy and impatient master Tall. After locating their book of magical enchantments, the two soon find that forging Gleipnir will be no easy feat. To do so they will need to gather six near-impossible things, including the beard of a woman, the sound of a cat’s footfall, and the breath of a fish (not to mention a dash of salt and pepper). As their amusing quest for these unusual components develops, tiny & Tall find themselves being pursued by a feral bear, trying to convince a fake troll to let them cross a bridge, and negotiating a stand-off between a group of valkyric warriors and the terrifying Undead Designers, a group of skeletal trend-setting fashionistas.

Each main character has his own distinct personality that makes for fun company when controlling one individually, but it’s the dynamic when the two are combined that is particularly amusing. At first I found myself feeling sorry for tiny, who always seems to be taking responsibility for the quest while bearing the brunt of Tall’s unceasing irritability. It soon becomes clear, though, that Tall is very reliant on tiny, who, in return, constantly puts Tall in humiliating positions for the sake of the adventure, like getting him to stand in the right place so tiny can climb on him, or having him dress up in a ridiculous costume. 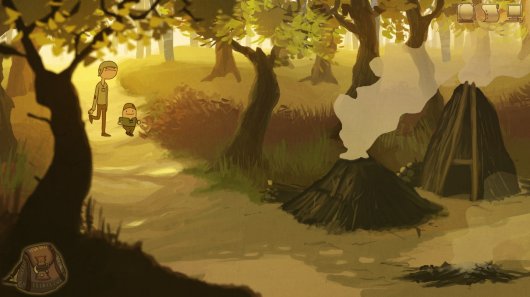 I hadn’t realized going in that this was just the first episode in an ongoing series, as this isn’t noticeably advertised anywhere. For a debut, however, this instalment is a reasonable length in terms of play time, by the end of which the duo has managed to tick off a couple of items from their improbable list. I played at a steady pace for 3-4 hours over a couple of days, and during that time I found myself feeling genuinely connected to the protagonists and their mission. The game does, however, have some issues in the way the story is communicated as a result of some broken English. For quite some time I debated with myself whether the writing was intentionally designed to be unconventional so as to give the characters unique and expressive voices. After a while, however, the prevalent misuse of pronouns, occasional spelling errors, and incorrect sentence structure became too obvious to ignore and did begin to negatively skew my experience. In saying this, it is always clear what the characters are trying to convey, and never did I feel as though the dialogue was incomprehensible.

The interface is simple and user-friendly, relying on the right mouse button to look at hotspots and the left button to interact. Hotspot labels appear when the cursor is moved over them, which is helpful as they usually blend in very well with the background. By clicking a bag at the bottom left corner of the screen, you can open up your inventory to the right, which is handy and functional without being intrusive. Gleipnir also has a few other nifty features, including the use of the spacebar to highlight hotspots, and some icons at the top left that allow switching between tiny & Tall, as well as opening a world map for fast travelling. There is also an optional hint system that can be accessed by talking to other characters (usually Tall) and asking them for either hints or solutions.

These features work well for the most part, although I did notice a handful of dead hotspots, all of which should have yielded dialogue. Thankfully none of these issues made the game unplayable, but I was left feeling as though they should have received proper attention. It would have also been better if more of the incorrect item-hotspot combinations elicited non-generic responses. There is scarce information provided about save and load functions, including the fact that there are no manual saves. Although the game autosaves, this is never communicated to the player. As a result, I struggled for five minutes trying to find a non-existent save option before eventually exiting the game with nothing but hope in my heart that my progress had been recorded. 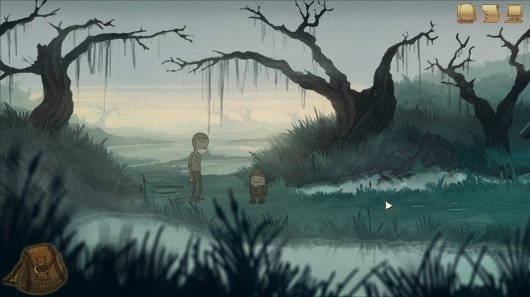 The art in tiny & Tall is where the game really shines. The scenes are hand-painted in appealing earthy tones in a traditional 2.5D third-person style, and the characters, who are toon-like and endearing, move smoothly across the environment, often disappearing behind trees and other objects in the foreground. The range of landscape backgrounds are quite impressive and include charming forests, rolling hills and moody swampland, while the interiors of cosy cottages and stone halls are lit by the soft warm glow of candles, forge fire and even firefly lanterns in one instance.

There is a decent amount of character animation throughout that is quite detailed and funny, such as when Tall struggles to climb a tree or when tiny uses a rope to slingshot himself. The protagonists’ facial animations are also well designed, and I often found myself connecting with them as a result of tiny’s starry-eyed face and Tall’s irritated expressions. There are several animated cutscenes too; I was especially impressed by one sequence where tiny & Tall are on the run from an enormous bear, during which time everything remains in a state of looped animation as the player devises an escape. This funny animated puzzle is also quite ingenious, as it doubles as a way of relieving you of unnecessary items before the next part of the story.

Aside from the woodland art and the occasional references to drinking ancient Viking mead, perhaps the greatest contributor to tiny & Tall’s Nordic atmosphere is its audio. At first I was surprised to find that there were no voice-overs, but ultimately I enjoyed being able to read the dialogue at my own pace. The high quality musical accompaniment is easy-going, which is ideal for point-and-clicks that require a degree of concentration during challenging puzzles. There are quite a few different tracks that play depending on where you are in the story, and they each lend a folklorish flavour to the world via violins, chimes and the odd beat of a simple drum. The sound effects are nothing too complicated (nor do they need to be) but they are always included when necessary. Opening a door is greeted with a deep creaking, while the use of magic returns a thunderous boom upon healing a damaged tree. 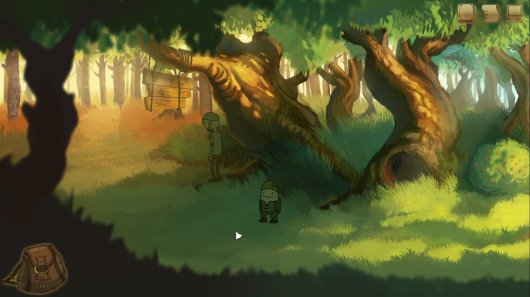 There are several kinds of puzzles to be solved, some of which are of the standard “use pole on out-of-reach object” variety, while others are more interesting adaptations of the traditional item-hotspot formula. One puzzle I found particularly thoughtful was when I had to open a stuck drawer belonging to tiny’s friends. Trying to use an item while in control of the eternally amicable tiny leads to defiance in this case, as he insists he will not carry out the task because the furniture belongs to his friends. There are some tasks that don’t involve inventory, like when you have to find letters in a cryptic spellbook and then use them to fill out a word on the previous page, or when trial and error is needed to find the right combination of buttons on a rune-engraved wheel. The puzzles that I most enjoyed, however, are the funny problems where diplomatic use of dialogue options is required lest tiny & Tall be imprisoned for eternity and you are asked to try again.

There are many good things about Gleipnir, and during my first playthrough I didn’t once notice anything that drastically altered my positive view of the game. My second playthrough, however, was subject to a few significant visual anomalies. Among the problems that I experienced were hotspots that did not highlight when I used the spacebar, or alternatively, highlights showing hotspots that were not visible in the current room. Some inventory objects stayed in the environment even after they were picked up, and most noticeably, a host of large characters from a previous campsite sporadically appeared at one stage where they were definitely not meant to.

Despite these few technical issues and a rough translation, I enjoyed tiny & Tall: Gleipnir. The characters are both unique and loveable in their own way, and the dynamic between them works well the majority of the time. I was astonished to find that the story was based on an authentic Norse legend where Thor does ask two Dwarven smiths to forge Gleipnir from the exact six “impossibilities” mentioned in the game. The art and animations truly are some of the most charming I have come across, and the puzzles are interesting, ranging from generally quite easy to occasionally rather challenging. This compelling first part ends with a funny victory scene that left me feeling very satisfied with what I had achieved, but also eager to see more of the two protagonists and continue their quest in the future.

Lovers of point-and-click adventures should enjoy the funny and compelling first installment of tiny & Tall: Gleipnir, providing you can overlook some broken English and perhaps the occasional glitch.

GAME INFO tiny & Tall: Gleipnir – Part 1 is an adventure game by t&T Games released in 2018 for Mac, PC and Linux. It has a Stylized art style, presented in 2D or 2.5D and is played in a Third-Person perspective.

What our readers think of tiny & Tall: Gleipnir – Part 1