The Franz Kafka Videogame by mif2000 is a cute point-and-click puzzle game with minimal plot that still manages to capture the Kafkaesque ambience and adapt it to an interactive environment. Do not expect any intricate psychological interpretation of the famous author or his work here. Instead the game invites players to experience from a safe distance a world in which absurdity and the surreal is normal, and actions have no essential meaning. In this light, playing the game is akin to experiencing the mind of Kafka, at least the one manifested in his writings, in a subtle, non-intrusive and short-lived fashion.

It is telling that the identity assumed by the player is fluid. The game is divided into acts segmented by intermissions, and the setting resembles that of an interactive drama, with many of the standalone screens set up like a theatre stage. Your perspective is that of the audience, and Kafka keeps you at a distance by treating the in-game figures as distinct entities at all times. Indeed, the game feels as if everything is staged and you must simply uncover how things work. The puzzles, which constitute the majority of the gameplay, demand that you discover the right way to manipulate devices and contraptions to progress further. The obstacles are innovative enough, especially when taking into consideration the dreamlike atmosphere of the environments, in which reality is shattered and non-cohesive. You are forced to think outside the box – or rather, become very aware of the box’s presence.

The premise is quite straightforward: “K.” is a psychotherapist in early 20th century Bohemia. He receives a mysterious invitation to work for Castlock Corp. in America, and thus his adventure ensues. Quite unwillingly, he travels from Europe to the U.S. by a train which boards into a ship which flies up into the sky with hot air balloons. He eventually finds himself somewhere in America, where he has to locate and reach his new employer. Actually, calling his journey an "adventure" in the traditional sense may be an exaggeration, since neither the narrative nor the gameplay allows for that. The overall play time won’t last more than an hour or two, though understandably this can be prolonged depending on the time one spends on the puzzles. 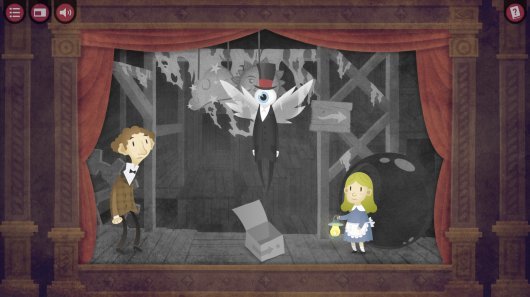 Kafka is predominantly a puzzler with various challenges to solve along the way. Some are easy and others quite demanding, but they are all similar in nature, meaning that they require no legwork – going from one place to another – or any combination of objects and items. In fact, there is no inventory at all. Instead, you must solve a linear series of single-screen puzzles by interacting the correct way with the appropriate parts of the screen. Which elements are the useful ones is also part of the challenge, as hotspots aren’t even indicated by a smart cursor, though occasionally some cryptic instruction is provided in the form of dialogue or comments from the characters you meet.

Some of these puzzles are inventive, like one of the first encountered in the game, which takes you to a meeting with Alice in Wonderland as she’s looking for her rabbit. Here you must cleverly use the stage props available to succeed. Other puzzles are less creative, like a letter which also works as a map, on which you need to coordinate its lines properly for the letter to show the way. In all cases, there is a help button if one gets annoyingly stuck, which offers tiered hints rather than the flat-out solution, although there is a wait period between each new level of increasingly pointed tips. This is quite useful if not outright necessary, since the game offers little organic orientation towards the right steps for overcoming each challenge.

Despite being puzzle-based, the game does not feel disconnected. On the contrary, the obstacles are cohesively interwoven with the progression of the story. This is facilitated by the dream-infused experience of the game world, in which the absurdity in the mundane is accepted. For example, at one point you have to complete a form for a permit to work for Castlock Corp. At the same time, this permit represents a dive into the subconscious – a reflection of oneself, as we’re informed by the attending officer geared in a standard deep sea diving suit topped with a helmet. Hence, this puzzle is simultaneously an ordinary task in a bureaucratic context and a manifestation of its illogicality. In this way, the game successfully captures the essence of Kafka’s literature. 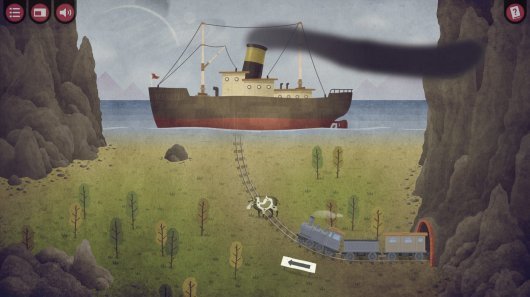 The stifling incapability of Kafka’s protagonists to perform actions with any serious effects is mitigated by the distance the game cultivates between its characters and the player. This functions as a protective wall against ludicrousness that can reach insanity, like the black duck who stokes the ship’s boiler and tells a parable that is completely incoherent and nonsensical. Your own progression through the game is that of a visitor or traveler passing through, never staying. There is a proper resolution to the journey at the end, though unfortunately it’s a weak one, in the sense that it chooses a very easy way out of its own surrealism – something that is absent from Kafka’s works.

The looped music of a woman chanting is cheerful, with a nostalgic feeling for the prewar era that makes for nice accompaniment to the puzzles. The artwork of the 2D environment is similarly reminiscent of hand-drawn tapestries of nursery rooms back in the day. The palette is colorful without being vibrant, retaining a sepia effect that matches the ambience of old times. At the same time, it is too cute for a game trying to convey the world of Kafka. From the start, K.’s office looks quite inviting with its wooden furniture, green tapestry, and a gramophone in the background. Even later, when the atmosphere takes on an intriguing film noir tone, the lovely painterly aesthetic somewhat romanticizes the Kafkaesque elements.

The full experience comprises scenes and figures from Kafka’s books that populate the game world without any sufficient reasoning, like the notorious humanoid bug from Metamorphosis, which here assumes the role of a private detective with no apparent connection to the original. Giving no adequate explanation for why things are represented the way they are, the game does not allow for any intimate familiarity. And because of its brevity and rapid procession of scenes, you do not develop any attachment to the world and/or the characters. As such, the involvement of the player resembles a skim-reading through Kafka’s bibliography rather than a close reading of his work. 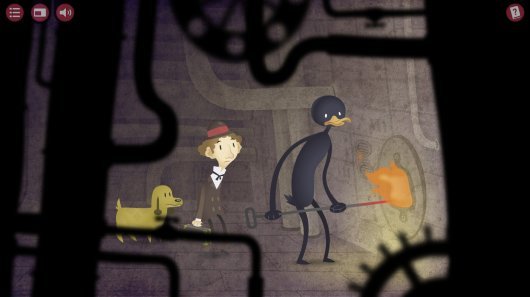 The geniality of a game that speaks the language of Kafka in many small details is evident and admirable. That being said, it is a language devoid of meaning here. It offers a time-limited engagement in settings that those already familiar with Kafka’s idiosyncrasy will find bemusing, perhaps even charming. Others will probably just think it bizarre and confusing. Both will forget about it soon thereafter without any provocative gameplay and/or narrative to make it truly memorable. Its simplicity befits the style of the game – it is after all a puzzler – but it’s a shame there's never more than a minimal attempt at the kind of radicalism and ingenuity the renowned author could easily have afforded.

All in all, The Franz Kafka Videogame is a pleasant little puzzle game that will evoke a lightweight nostalgia for people that have prior knowledge of its namesake’s work. Despite having created an appealing atmosphere with its visual design, music, and absurd ambience, however, its limited gameplay ultimately doesn’t provide anything more than a couple hours, at most, of surreal diversion. If you are the type of person who enjoys puzzles with a twist of inspiration, creative artwork, and notes of allusion to classic works, then you will most likely have some fun with this game as long as it lasts. (And should you be inspired to pick up a Kafka novel at the end, all the better.) If, on the other hand, you want to experience deeper engagement in both story and gameplay, then this game will leave you hanging.

The Franz Kafka Videogame offers a highly surreal taste of the renowned author’s works in a linear puzzle-oriented experience, but lacks enough depth to truly do them justice.

GAME INFO The Franz Kafka Videogame is an adventure game by mif2000 released in 2017 for Android, iPad, iPhone, Mac, PC and Linux. It has a Stylized art style, presented in 2D or 2.5D and is played in a Third-Person perspective.

What our readers think of The Franz Kafka Videogame