Adventure games by NEXT Studios

I can’t confirm whether or not “Iris” is the name of the player-controlled character or just a play on words about optics, and I can only postulate that “Fall” refers to your figurative tumble down a rabbit hole. Furthermore, I have no answer for why there is a period wedged between the two words. Unorthodox as its title may be, however, fledgling Chinese developer NEXT Studios’ Iris.Fall is actually a rather conventional linear puzzler. At least, fundamentally. Enter an area and expect an environmental puzzle or two to solve before progressing to the next challenges, and so forth. Procuring an inventory of key items to be used on the spot is also part and parcel of your journey. Nonetheless, there are a few gimmicks involving light and shadow that cast an engaging array of puzzle designs upon a dreamy and pleasantly old-fashioned setting.

For the sake of convenience, let’s go ahead and call the protagonist Iris. So, after waking from a nightmare in an introductory cinematic, Iris catches notice of a black cat in her room, practically beckoning her out of bed. She follows as it absconds into the night and the empty streets, and finally into a derelict theater. Within, she peers down a crumbled stairway where an unnatural wind blows upward, corroding the walls and literally draining the color from her body. From here on the only spots of color come from the yellow beams of artificial light and occasional accents of blue. Without uttering a word or applying text, Iris.Fall tells the rest of its story – what vague story there is – through succinct cinematics involving puppets and people who seem to solely exist in shadows, as rife with metaphor as that sounds. Clearly, the developer wants you to surmise your own conclusions as you press onward into the fantastical, loosely connected steampunk-inspired rooms beneath the theater. What is your objective? Well, it seems you’re just following the cat until the slightly predictable plot revelation at the end.

From a fixed perspective, the camera tracks Iris automatically but allows you three-dimensional movement. Character speed is a tad slow, but since walking from one obstacle to the next usually takes very little time, and many puzzles lock you into their own systems, this rarely feels like an issue. Environments are fairly cramped anyway, with exploration being a non-factor. Players are given the choice of keyboard and mouse or gamepad controls, and both control methods felt comfortable to me, the only distinction between them being that the former requires you to click on things such as the bag icon in the corner of the screen to open your inventory, as well as the eye icon that displays when within range of interactive hotspots, while the latter simplifies things a bit by assigning these commands to the press of buttons. 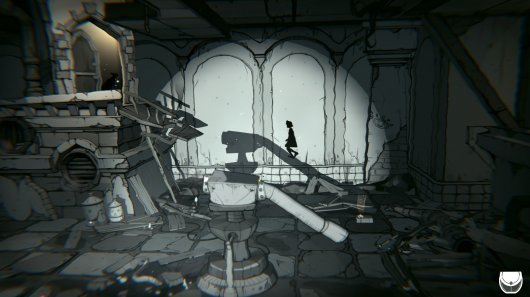 Right from the top of those first impassable stairs, you are immediately introduced to the principal mechanic, that of fusing Iris with her own shadow. Come across a strategically placed open book on the floor and interact with it to make your transition – just don’t hold out for any narrative justification of why this is possible. In shadow form, you will reach places otherwise inaccessible by sliding across the flat surface of walls and treading on the shadows of other objects from the foreground. It’s an excellent gimmick, though not entirely unique, bearing an unmistakable resemblance to a major feature of such titles as Contrast, Lost in Shadow, and The Legend of Zelda: A Link Between Worlds. Even so, the execution here differs enough that I wouldn’t resort to such a belittling term as “knockoff.” I do wish there was more flexibility in the implementation of this mechanic though, since it can only be activated at predetermined locations.

Even so, the shadow-based puzzles offer a decent range, whether building a bridge made of shadow for you to cross via placeable objects and moveable platforms, or fitting shadows within an outline by determining the proper distance to place items from a light source. Not leaning too heavily on these tricks, Iris.Fall has plenty more in its bag as well. You will find yourself confronting such objectives as spinning a row of pictographs like a combination lock to find the set that creates a continuous mural; flipping around a series of staircases with levers in a section reminiscent of the mind-bending art of M.C. Escher; and directing beams of light between doors to link them, thus allowing you to warp from one to the other and arrive at different floors. One particular puzzle reminds me of a slider the way it expects you to think one step ahead while shifting pieces on a board. As someone who has never found enjoyment in slide puzzles, this was a sticking point for me, but considering this is the only substantial gripe I have in this area, I’d say the game does an excellent job of instituting diverse and interesting scenarios while slowly increasing the difficulty.

You are able to toggle hints on or off in the settings, although the only difference I noticed is that when switched on a small (sometimes imperceptible) white dot hovers over points of interest. In other words, hints have no bearing on assisting with puzzle solutions but instead potentially prevent the need for pixel hunting. As with any puzzle-oriented game, how long it takes to finish will vary greatly, but anticipate about two hours of play time. Aside from starting the game from scratch, completed chapters are individually selectable from the title screen for your convenience, though there are no collectibles or alternate solutions a second time through that particularly warrant a replay. 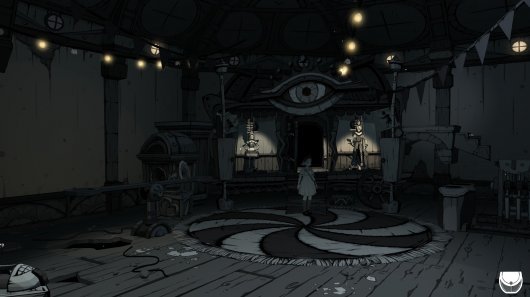 The presentation of Iris.Fall is arguably its strongest asset, at once drawing visual inspiration from puppet shows and illustrated storybooks. Basically, it’s a mishmash of childhood storytelling aesthetics with a comparable kind of wonder and fantasy that excites the mind, realized through a blend of hand-drawn 2D backdrops and 3D environments. Sometimes entering a new section is like the unexplainable shift between one dream and the next; the standout moment for me would have to be when I was dropped into the pages of a pop-up book. Yet no matter where you find yourself, the world is a spectacle of antiquated architecture and décor, with the most advanced machinery being composed of wood, stone, and clockwork gears. The choice of (mostly) monochromatic visuals as well as vignetting during cutscenes lends a quaintness that’s exquisitely matched by the application of piano, accordion, and music box songs.

It’s unlikely that you will feel any emotional connection to Iris by the end, but the concept of puppetry ties the presentation and gameplay together in a gratifying way. There are hardly any other characters in the game, and apart from the young protagonist the cat is the only other one to get dedicated screen time. Attention to little details is what breathes life into the experience, like where the feline clambers about rooms and chases shadows. Passing close enough to certain objects might trigger some sort of reaction, such as accidentally knocking over buckets of coal. The most pronounced instance I encountered was when Iris decided to sit and bounce on the edge of a bed when I approached it. Of course, I would have welcomed more of these moments, but the fact that they are present at all is admirable.

The final sequence of puzzles proved too easily overcome to induce a properly weighty climax, leaving me a bit surprised that it was over. Adding to this reaction, I believe the emphasis on light and shadow mechanics ends up feeling overly straightforward without reaching its fullest potential. Still, even if the execution just misses the mark at times, it lands far more often. If puzzle-heavy gameplay is your kind of thing, then rest assured you will get your fill from Iris.Fall and likely come out of the experience pleased by the assortment, and I imagine the delightful visuals will satisfy you most of all.

Iris.Fall emerges from the shadows with challenging puzzles and beautiful art direction. Its streamlined gameplay may not always match the impeccable quality of its presentation, but this is unquestionably an adventure that deserves to be undertaken by puzzle fanatics.

GAME INFO Iris.Fall is an adventure game by NEXT Studios released in 2018 for PC. It has a Stylized art style, presented in Realtime 3D and is played in a Third-Person perspective.

What our readers think of Iris.Fall