Review for The Witch’s House MV

In 2012, Japanese developer Fummy released its freeware survival horror game The Witch’s House, which became something of a cult classic. Six years later a complete remake was released, seeing its way onto digital storefronts under the modified title The Witch’s House MV (those additional letters at the end representing the version of RPG Maker in which the game was built). Along with improved graphics (still of the 16-bit variety) are two new difficulty options – one of lenience and the other of increased challenge. After the original version slipped by me, I was both intrigued to finally see what I was missing and highly skeptical about the game being so purposely contingent on trial and error gameplay. Yet how swiftly I was won over by its charms!

With no elaborate setup, you find yourself in a forest skirting a witch’s house, assuming the role of Viola, a defenseless thirteen-year-old girl. The way out is barricaded by a thick growth of thorny vines, leaving no choice but to enter the cursed residence. Ascending ever higher, you will dodge death traps and solve puzzles while procuring the story from diary entries and encounters with inhuman squatters. The Witch’s House MV reserves most of its playtime (about an hour and a half) for constructing a rich setting. And any self-respecting tale of the supernatural absolutely needs a memorable environment to inhabit.

Viola remains a silent protagonist throughout, but there are a few chatty characters within the haunted walls, all quirky and potentially dangerous: a phantom chef that wants to cut your hand off, genuses of talking flowers that operate in cliques, and more. The only character that brings any comfort is a talking black cat, with his impish personality and disregard for the horrors abounding. This furry creature also serves as your save activation point wherever he appears. 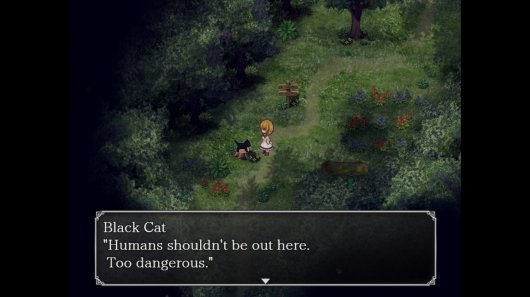 Controls are easy to grasp, with keys encompassing movement, interaction, an all-important dash button, and the menu from which you will make use of collected items. From the game’s top-down viewpoint you have four directions of movement. The developer recommends use of a gamepad, but while this was also my preference, the keyboard controls are perfectly acceptable and the in-game button configuration oddly only lists keyboard controls. There is no remapping available though.

Examining your surroundings is integral to gathering clues and finding items to tuck into your inventory. Be sure to inspect cabinets, drawers, and everything else for that matter, as some hotspots are not highlighted with a sparkle as others are. After initially following a rigid order of events, you will advance to areas of increasingly complex challenges. Clues can be as conspicuous as an empty slot between books on a shelf, or being told to redecorate two rooms to make them mirror images of each other, but they can also be as confounding as the hints “Go where only one eye is open” and “Make noise in four rooms.”

However simple the objective seems, overcoming traps along the way is another story. You might learn of the necessary means of progressing upon entering a location only to have to jump through hoops to achieve said goal, like when tasked with freeing a butterfly from a spider’s web. If you don’t have an equivalent item to swap it with, Indiana Jones-style, you’ll be eaten alive by an enormous arachnid. The solutions overall are undeniably clever and some may even stump you for a while. 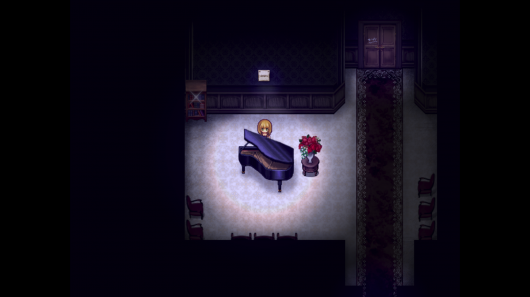 The Witch’s House MV is not a roleplaying game by any stretch, nor is there anything resembling combat, yet Viola possesses 10 hit points – presumably a nod to the old-school JRPGs it takes visual cues from, with its 16-bit tilesets and character sprites. There is just a single time these hit points factor in, and even then only superficially, as you can be poisoned from drinking a noxious looking liquid and watch your hit points drain with every step you take. With no antidote available, I believe this moment is meant to give players false hope, unlike the immediate deaths elsewhere. You simply cannot survive such mistakes as gulping down an obvious health hazard.

In fact, you are all but guaranteed to die in this game. Often. Walk through a bloody puddle to reach a note at the other end of a room and suffer the same fate as the victim whose blood you tread upon. The sound of something sailing through the air precedes airborne blades bound for you with only a moment to react. This kind of trial and error is a fundamental pillar of The Witch’s House MV, and it takes full advantage by sadistically toying with your curiosity.

The ways you can die are as plentiful as they are surprising and amusing. Some occur after solving puzzles incorrectly, such as being impaled by spikes, a massive hand squeezing you into pulp, and being gunned down by a life-sized toy soldier with a rifle. Then there are threats that test your flight response, such as outrunning the likes of a giant stuffed bear keen to crush you, or choking on noxious fumes while you scramble to the next area before time, and Viola, expires. No matter the danger, or how many rooms it follows you through, reaching a predetermined point grants you safety – but only a mere moment of reprieve. 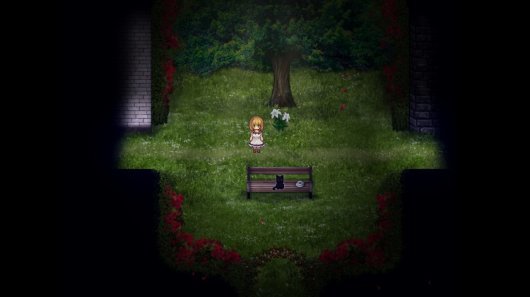 Dying kicks you back to the title screen, but reloading is nearly instantaneous. Save points are ample, allowing you to record your progress however often you deem necessary, so long as you don’t mind the short trek back to the black cat. If this sounds like a nuisance, death on the easiest difficulty option only sets you back to the start of the room of your demise. So long as you’re learning from your blunders, however, game-overs are less a hassle and more an amusing outcome due to the absurd and gruesome animations that accompany them.

Now the time has come to talk briefly about jump scares. These are always cheap and fleeting in comparison to carefully plotted suspense and chilling discoveries, so I understand why many might find them tiresome. But the thing is, jump scares can also be rather entertaining – a means of delivering frights in a casual fashion, like punchlines to jokes. Here bottles suddenly fall from shelves to shatter upon the ground, bloody handprints materialize with an audible slap, and a handful of monsters burst through doors to chase you down. Audio design plays strongly here, first calming you with light synthesized tunes and then abruptly jolting you with sound effects. It’s the way The Witch’s House MV keeps you ever-alert through its deployment of jump scares that makes them indispensable. There is no time to relax because this house is alive (maybe literally) with activity, and anything and everything could be out to kill you.

The horrors aren’t all flashy, mind. There is ambiance built from the macabre, and cultivated by way of gore, ghosts, and ghoulish happenings. You may catch a glimpse of a specter before it quickly fades away, or be subjected to hallucinations such as a room filling with blood. The pixel art prevents the more explicit carnage from becoming unapproachable for those not accustomed to that side of the genre. Similarly, the anime character designs lend a distinctly Japanese cuteness which softens the subject matter. 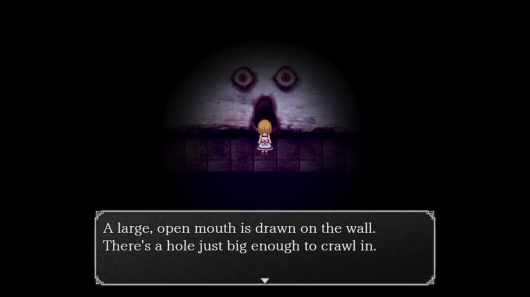 The graphics are clean and easily discernible, utilizing a muted color palette to set the mood. Every floor of the house is unique and space doesn't seem to behave as it should, expanding beyond the limits of the exterior, thus lending to the unnatural quality of the place. Transitioning between rooms is snappy, each displayed one at a time, whether sizable or cramped, hovering against a black backdrop. The improvement to the visuals over the original release of The Witch’s House is definitely noticeable when comparing the general level of detail, although not so dramatic a change as to look like a different game altogether.

I urge all prospective players to try to uncover the “true ending,” as it not only recontextualizes the easier-to-attain “good ending” in a wholly grim manner, it also unlocks the impressive “Extra Mode.” Put simply, Extra Mode is the hardest difficulty. In lengthier terms, it adds more possibilities for death and revises the solutions and, in most cases, the entire structure of puzzles. Instead of, say, collecting a rope you need from a barrel, you will find a ball of yarn which diverts the process in a new direction. That shelf where you inserted a key item originally is now a death trap, causing you to search the environment more meticulously for the alternate solution. Important objects are at times obscured behind or beneath furniture; even an entire room is hidden from only the sharpest of eyes. 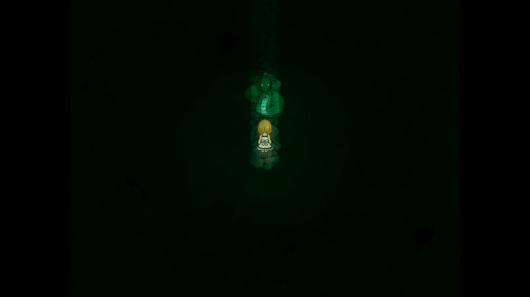 This harder setting can border on frustrating, more so because the monsters chase you at quicker speeds, drawing attention to how unreliable the tile-based movement controls can be. But the fact that the game includes added hazards and trickier puzzles for those who have already completed the standard mode is a commendable bonus to an already fine product.

Amidst the surge of indie titles proving that big budgets and showy graphics are not the key to great horror games, The Witch’s House MV stands testament. On the surface it appears to be a simple retro-styled haunted house simulator, replete with jump scares and spooky imagery, but legitimate care has been put into the pacing of these frights and the sequencing of its puzzles. Though uncompromising with its structure and light on story, this game is nonetheless a joy to conquer. Then conquer again on its more demanding, remixed difficulty.

The Witch’s House MV is available at:

Like a trip through a prop-filled haunted attraction, The Witch’s House MV captivates with preset scares and gory imagery, an onslaught of retro-imbued horror, inventive puzzles and a surprisingly whimsical attitude toward the protagonist’s frequent death.

GAME INFO The Witch’s House MV is an adventure game by released in 2018 for PC. It has a Stylized art style, presented in 2D or 2.5D and is played in a Third-Person perspective.