The draw of a virtual reality experience is predicated upon the notion of taking away a person’s ability to view their immediate surroundings and replace them with an entirely immersive imaginary facsimile. In their effort to craft a unique thriller, Tiny Bull Studios realized that the VR formula already contained a built-in mechanism for ripping the player out of their comfort zone. We’ve seen spooky mansions filled with puzzles before – that’s nothing novel. But it’s the seeing that makes them so familiar, and so the developers have used the physical constraints of the VR headset – its innate characteristic to take away a person’s natural sense of sight – to its benefit, casting players as the lead character in the aptly-named Blind. Its narrative unfortunately ends up being a little less satisfying, but the game provides some fun and creative puzzles to crack while contending with a significant handicap.

Players assume the first-person role of Jean, who comes to in a large mansion after a horrific car accident with no recollection of how she got there. Jean knows it is up to her to find her little brother Scott, who was with her in the car, and escape the house together. The only problem is that, as an apparent side effect of the crash, Jean has lost her ability to see. As she takes her first few stumbling steps in the dark, the mysterious masked Warden – at first a disembodied voice speaking to Jean via the mansion’s various gramophones, but later appearing in person – assures her that Scott is safe and that both of them will be taken care of, which does nothing to ease either Jean or your own fears.

There is, of course, some form of visibility in Blind, or else it wouldn’t function very well as a game. Jean is able to use echolocation, meaning that sound – much as it would to an actual blind person – is absolutely vital to the experience. In this case the sounds coming from the Warden’s gramophone ping off objects in the environment, depicting Jean’s surroundings in a stylized photo negative filter, with all colors removed and everything depicted in stark shades of black with white highlights and contours, even including fine details like rug patterns and decorative wood-carved paneling. These reveals are momentary, however, lasting only seconds before fading to darkness once again. When no external source of sound is available, Jean can simply pick up any item around her – picture frames, books, bottles – and throw them for momentary glimpses of vision. Before too long, she is even given a white cane she can tap to reveal her surroundings. 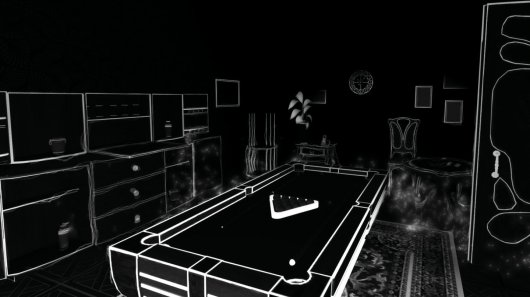 As a concept, Blind really nails what it was going for. Being pitched headlong into total darkness creates a feeling of vulnerability that simply can't be reproduced on standard monitors. Having to rely on tapping your cane or throwing objects around just to see for a few seconds at a time is an unnerving experience at the best of times, and having to puzzle your way out of a mansion in which you’re not alone is all the more disconcerting. Blind presents a VR experience unlike any I’ve played before, and even impresses on a technical level with its lighting effects. Sound waves expand from their source, with soft noises only producing a small corona of light around them, while sharp cane taps send a wave of light traveling down long hallways. But your vision begins to dim again almost immediately, and the constant need to make noise while navigating unfamiliar environments becomes at once vital and frustrating, much like it would in real life.

The entirety of Blind’s sound design is experienced from Jean’s perspective, with even the tiniest noise helping her to visualize the world around her. By virtue of being such a vital component of the gameplay, the soundscape remains fairly minimal and atmospheric, from the staticky crackling of an old-time radio tuned to white noise, to the howling of wind through a shattered window pane. Some actual music does exist, whether the soft tinkling of a music box playing a lovely melody, or a soothing piano composition played over a gramophone speaker. The game is fully voiced as well, though with somewhat more mixed results. Jean and the Warden, who get the lion’s share of voiced dialog, perform their roles well, while some of the other family members who appear in select flashback visions are less effective. But this is a mostly solitary experience, so don’t expect a glut of voice-over in any case.

For all its atmospheric presentation, Blind doesn’t entirely avoid stumbling here and there while groping its way around in the dark. There is a lot more to the narrative than Jean’s abduction by the Warden, and as she begins to explore her surroundings, past visions of her family begin to piece together a cryptic tale of a tragic event in Jean’s past. But after some interesting clues along the way, open to player interpretation and leading up to the big reveal, the game fails to tie up all loose ends in a satisfying manner, choosing instead to enter a final act that seems to exist simply to squeeze a few more minutes out of its gameplay conceits rather than bringing closure to the story. 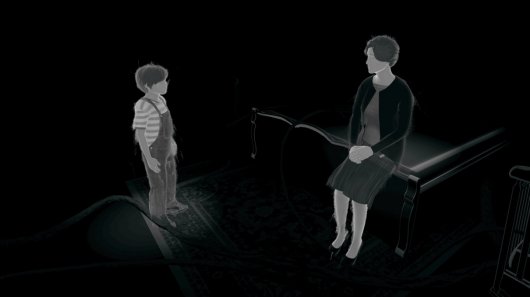 Puzzles work well for the most part; Jean must progress through the house by overcoming obstacles, some of which make interesting use of her visualized manner of hearing. For example, a pipe puzzle that takes place in the indoor garden requires you to place a series of valves in order to constrict the flow of water toward a large fountain. This is displayed by actually hearing the water in the pipes that run behind a wall, letting you know which pathways are open and which aren’t. Other challenges include decrypting musical codes and manipulating dials and switches on a large piece of hospital machinery to match a certain rhythm of sounds. Several activities are of the more ordinary variety, like inserting gears into a jukebox to make it run, or setting a clock to a specific time to open a locked compartment. One of the most impressive things about many of them is the way they revolve around objects that also play key roles within the narrative, like the hospital machinery found in Scott’s room, and a puzzle revolving around Jean’s teenage diary.

Towards the end of the game, however, things feel a little less nuanced. Two lengthy back-to-back sections require Jean to slowly search large areas of the mansion – in the dark, don’t forget – in order to locate three small items that must be used to open an exit, in one case without even letting you know what you are supposed to be looking for. The final act does away with puzzles almost entirely, opting instead for stealth and chase segments. While they aren’t unreasonably difficult, they do present a type of gameplay mechanic not all players will appreciate.

Although my time with Blind was ultimately a positive experience, I did hit a few serious snags early on. One of the first puzzles to solve after learning you’ll need to do so to escape the house unfortunately requires the movement of a small piece of furniture, something which is neither communicated to you, nor is it required either before that moment or ever again afterward. Already feeling quite defeated by a poorly-clued puzzle after my first play session, I was almost ready to give up on Blind completely. 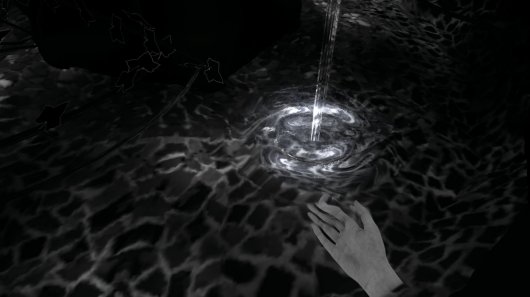 This feeling of discontent was exacerbated by the nausea that set in after about twenty or thirty minutes of playtime with the PlayStation’s Dualshock 4. However, during my second attempt I was able to solve the puzzle, and switching to the PlayStation Move motion controllers not only kept the motion sickness at bay, but made for a much more intuitive control scheme in which you individually control both of Jean’s hands and freely move through the environment. Turning, on the other hand, happens in increments, like a sudden left or right pivot, though it is possible to steer Jean slightly left or right by turning your head in either direction while going forward – a nice touch that makes movement feel very natural at times. From that point on, the remainder of the game’s 4-5 hour runtime became a much smoother ride.

Apart from a few temporary setbacks, Blind represents a curious, simple premise that is generally executed quite well. On a technical level, the game’s visual mechanics and the way naturalistic sound plays into them are impressive and stand out as a highlight. The narrative fares less well, being perhaps too cryptic most of the way to have much of an emotional impact, and the fact that the gameplay goes a little off the rails toward the end doesn’t help. Ultimately, rather than a strong story that will stick with you long after the credits roll, Blind is more memorable as an overall experience of utter helplessness that not many games are able to evoke, and one that can only truly be appreciated in virtual reality.

While it falls a little short of wowing with its story or conclusion, Blind brings a compelling atmosphere and enough interesting ideas to the table to make it an intriguing proposition among VR puzzle thrillers.

GAME INFO Blind is an adventure game by Tiny Bull Studios released in 2018 for Oculus Rift, PlayStation VR and HTC Vive. It has a Illustrated realism style, presented in Realtime 3D and is played in a First-Person perspective. You can download Blind from: We get a small commission from any game you buy through these links.
The Good:
The Bad:
The Good:
The Bad:

What our readers think of Blind