The Outpost Nine: Episode One review

A seemingly countless number of films and video games have paid homage to the classic 1979 film Alien. While not based on Ridley Scott’s sci-fi horror masterpiece in any official capacity, The Outpost Nine draws unavoidable comparisons, from aesthetic cues to story progression. As a self-professed admirer of Alien and many of its genre heirs, I can’t help but wonder, where does tribute end and facsimile begin? It’s clear that The Outpost Nine means well, yet the amount of borrowed components stack high, to the point where it can be difficult to see what inventiveness is on offer. The text-based, lo-fi hybrid game design is straightforward to a fault, relinquishing the spotlight to a good deal of reading, and being the opening act to an ongoing series, for now there is little more than setup to enjoy.

The first episode consists of two chapters with a combined length of about an hour, each containing a portion of text adventure gameplay bookended by visual novel story scenes. From the viewpoint of Omaha, the man in charge of a dreary mining facility designated “The Outpost,” you are introduced to a diverse crew that is not too dissimilar to that of the game’s progenitor. Suddenly, Omaha’s day off is interrupted by an order from his superior to answer the distress signal of a nearby company vessel. As you might have guessed, this is when the horror factors in. After remotely landing the ship in the facility’s docking bay, Omaha takes a small team to investigate, where you discover the eviscerated remains of a former occupant and one survivor, hideously mutated. Inducting this afflicted man into The Outpost’s infirmary is the sensible thing to do, but it quickly proves a mistake that jeopardizes the lives of everyone present.

The story is a fairly passive affair, yielding no real influence from the player, with gameplay mostly consisting of choosing simple text options outside of cutscenes. When in control, a blueprint-like map is displayed with a handful of choices: investigate, talk, use, and move. These are all pretty self-explanatory, but something to note is that “move” transports you from the room you currently occupy to an adjacent room, showing your character on the map merely as a dot. This degree of minimalism and restricted movement engenders a curious detachment between the game and player that might make you feel like you’re someplace else, light years away, desperately out of reach of Omaha and his crew. 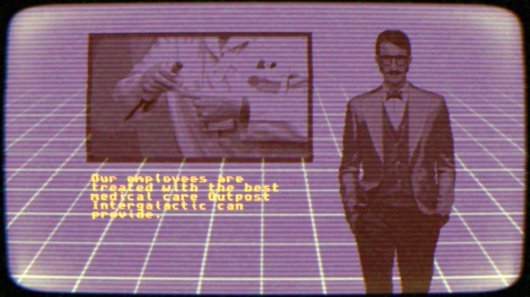 There are only a few tasks that you must accomplish in order to advance, which include pressing buttons and flipping switches on a panel in the order instructed, tracking down and installing fuses, as well as rearranging wires to repair a keypad. These activities are the only instances where you interact with anything besides text, having you click and drag objects. Nothing here will test your puzzle-solving skills, apart from decoding a diary entry that holds a required username and password.

Meanwhile, traversal becomes a little problematic when you don’t know exactly what you’re choosing: where do you want to proceed, corridor x1 or corridor x3? Since the options are shown in a list, it would make sense to also label them on the map, but unfortunately you have to resort to guesswork. This could be tolerable if not for one of the core features of chapter two – that of being hunted by an alien menace. Each room or hallway you enter means that the tracking device in your possession blips more rapidly, indicating that the thing stalking you is closing in. The looming threat is a welcome source of tension, but the guesswork leads to game-overs and skipping through dialogue you’ve already read to resume from where you left off. When you finally know which rooms to enter and what objects to interact with, this section becomes a breeze.

While being hunted, you are given the ability to hide, which resets the distance between you and your enemy. There is a single location where this function can be employed, and being all too easy to overlook this room means that the failure rate ends up too high when you are still getting a grasp of the mechanic. To alleviate stress somewhat, at least the creature only moves closer (or rather, your tracker bleeps more intensely) when you migrate to another room. 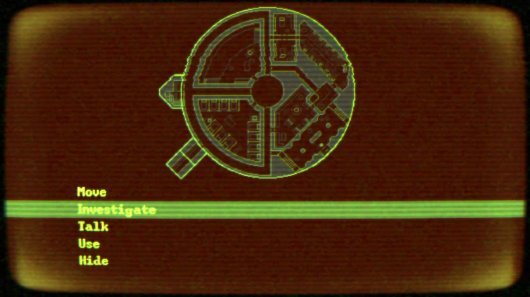 Advancing with methodical pacing, The Outpost Nine attempts to draw players in with its slick, deceptively simple presentation. If you don’t mind using your imagination to fill in the gaps, I suspect you will indeed find it to be unexpectedly immersive. From a purely audio-visual perspective, there is plenty to admire here. The best way to describe the production is to liken it to a retro video game played through a cathode ray tube display. The image glows with dominant greens and yellows, veiled in scanlines, bleeding effects, and smudgy resolution.

All text is unspoken, but two-dimensional character models and portraits are accompanied by telling sound effects in the vein of a radio drama, inviting you to bask in a thick, sonic mire. When not deliberately imparting unrest, the game takes a shot at John Carpenter-esque soundscapes – to me, the thumping title screen music specifically recalls Escape from New York.

In spite of these distinctive assets, The Outpost Nine struggles to find its own identity, at least in this debut episode. Remember that scene from Alien where Ripley refuses to break quarantine even to save a man’s life? Or the suspenseful motion tracker scene? These are just a couple plot points that the game reconstructs, turning it into something that could pass as an alternate telling of the movie. It would take only a slight adjustment to the wording of my earlier synopsis to practically make the two products interchangeable. 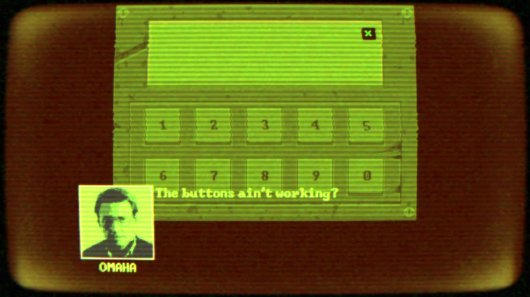 Another major point of criticism is the glaring need for further proofreading. A lot of dialogue leans into the differing dialects of characters, which somewhat masks the issue, but erroneous lines like “I’ll try and find how to shut this power on” are not intentional. There are also a distracting number of easily fixed typos such as: “They all they’re all out of juice.” Sometimes it gets truly immersion-breaking and just plain confusing, as when examining my environs I encountered this description: “Theres junk strewn around yet all beds are in are made except for one.” Each of these examples is copied verbatim from the game, and there are many more like this.

Though the script can require some unneeded effort due to linguistic blunders, the game shows greater competence in establishing its characters. Mayfield is a pragmatic man who delights in banter, Banshee is stern and strictly follows rules, Hart won’t let his age hold him back, Florrick is edgy and hotheaded, and player surrogate Omaha is overworked but dedicated. I generally understood their various traits and temperaments, even if a few characters are neglected. Of course, more chapters are planned, which could conceivably expand this aspect. Despite cutscenes being of disproportionate length when compared to the brief sections of player interaction, a side effect is that the setting and its denizens get a bit more time to be fleshed out. 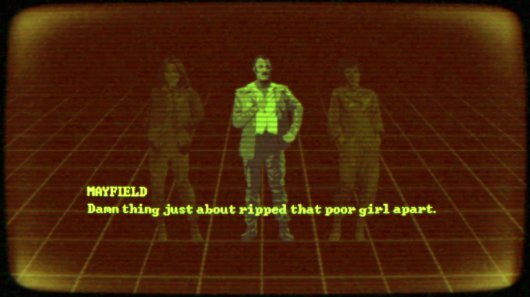 No matter how short the chapters end up being, it’s honestly quite baffling that there is no way to quit the game once you have started, only giving you a break between chapters. The Esc key does nothing apart from fast forwarding text, so if you are not on the title screen where the option to exit is available, then you must resort to alternate means to manually close the program. An oversight such as this, along with the abundant grammatical errors, amounts to a disappointing carelessness that can’t be ignored.

In the end, The Outpost Nine stirs a lot of conflict in me. Its reverence for Alien succeeds in reminding me of what makes that film a quintessential piece of sci-fi horror, but at the same time implicates its own dearth of creative ideas. The strong presentation and entertaining mix of game types held my interest, yet the whole of Episode One did nothing to convince me that future installments will provide much in the way of originality. The cliffhanger ending indicates an exciting confrontation to come, however, and I’m willing to see it through, just with sincere hopes for much-needed polish and a story that begins to forge its own path.

Unapologetically aping Ridley Scott’s Alien, the debut installment of The Outpost Nine seeks like-minded fans who yearn for a bygone era of sci-fi. The devotion to a tried-and-true formula ultimately steals away a lot of potential, though a decent foundation is constructed for future episodes to improve upon.

GAME INFO The Outpost Nine: Episode One is an adventure game by Benjy Bates released in 2018 for Mac and PC. It has a Stylized art style, presented in Illustrated text and is played in a First-Person perspective.

What our readers think of The Outpost Nine: Episode One