We get a small commission from any books sold.
All Bitmap Books
Written by
Cathlyn Vania — December 10, 2018

Whenever I thought I had NAIRI: Tower of Shirin figured out, I often found myself caught off guard by the turns the story took from there. Playing this lovely and thoroughly enjoyable (if not fully complete) narrative-driven fantasy adventure is one of those experiences that proves the saying ‘never judge a book by its cover’, though in this case it’s ‘never judge a game by its adorable characters’. Combining point-and-click gameplay with visual novel elements, and packed with cute anthropomorphic animals and heartwarming illustrations that seem to come straight out of a children’s storybook, it’s surprising to find how uncharacteristically dark and mature the tale actually is as the young protagonist roams deeper into the dangerous alleys of its desert city setting.

In the Middle Eastern-inspired desert of Shirin, humans and animals live together in a society plagued by underlying corruption surrounding the ongoing building of a sacred tower to celebrate an ancient goddess. The titular character is a little girl from Shirin’s ‘rich district’, who was smuggled out to the ‘poor district’ for her safety when her parents were suddenly arrested by the Royal Guards. Sheltered her whole life by her over-protective father, Nairi suddenly has the opportunity to get out and see the world, albeit in the unlikely company of bandits and gang members of the harsh oasis city. Soon, with the help of some friends she makes in her travels, Nairi sets out to go back home and rescue her parents, and maybe discover a secret or two about her destiny.

Nairi is accompanied by a rat named Rex, a studious (ex-)bandit so passionate about research and history that he’s better suited to be a scholar than a criminal. In fact, his journal is the resource providing hints for players throughout the game. Through Rex’s connections and knowledge of the underground scene, the pair navigate around the city in an attempt to sneak Nairi back into the rich district. This involves all sorts of tasks to find info about their smuggler, forming a fun domino-effect of quests in the process. 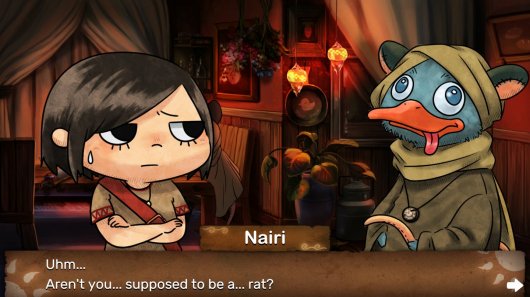 A lady washing her clothes by the river, for example, sends Nairi and Rex into a head-scratching side quest to find her good-for-nothing son and prevent him from joining a local gang, in return for a single rumor regarding the whereabouts of a treasure. Even when they find him, of course he needs a solid reason to go back home and leave his dream thug life behind, and thus asks them for a favor. Even more bizarre quests from other residents of the city are waiting in every corner, unlocking new locations and heartwarming stories as you go: A lonely bear asking for a companion, an awkward duck wishing to own a cool hat to better fit in, or those two humans from different parts of the city, who secretly adore each other and have become the talk of the town.

In first-person-view, you’ll move from one location to another by clicking one of four-directional arrows that appear when the cursor is moved to the edges of the screen. Any useful items will be added to the pop-up inventory bar at the bottom of the screen, which will be needed for the occasional object-combining puzzle. Along the way, you will also engage in a side task of clicking your surroundings to find coins, which can later be used to buy necessary tools. There is no hotspot highlighter to assist you, but there is a button available within the inventory to replay past conversations and important moments. This simplicity of the interface works well to allow players the luxury of enjoying the lush background scenery.

In fact, the artwork is so beautiful that it’s heartbreaking how many locations appear only briefly, some of them never to be seen again unless you replay the scene if it’s available in your recorded conversations. Whether the warm colors, glistening lights, or the generous size of the crowds in the background, each detail lends a kind of soul to each place you visit. From the cozy bandit’s hideout to the otherworldly shrine of Noora, everything is painted with an abundance of realism. Aside from the still backdrops, there are also animated flashbacks and cut scenes from time to time, told using sequential illustrations that further the main plot and can sometimes serve as a bridge between story arcs. 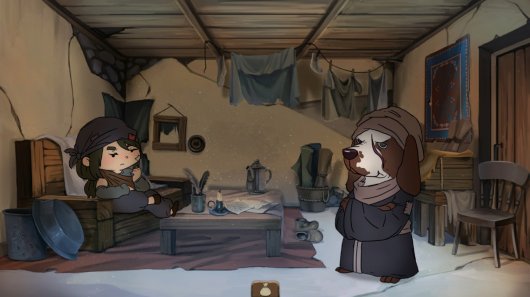 All of these locales are brought to life by the vibrant music of traditional strings and percussion that varies from scene to scene, as well as the notable sound of the Armenian Duduk, which instills a sense of magic to the Middle Eastern setting. Listening to the soundtrack for NAIRI is a wonderful experience by itself, but in-game it is able to transport you from a calm morning in a tavern with birds chirping in the background, to the hustle and bustle of the bazaar. The impressive score ranges from cheerful to ominous, from bright and festive to melancholic strings at night.

The residents of Shirin are all easily likeable, not only because of their endearing designs that remind me of the cute characters from Hamtaro and Animal Crossing, but also thanks to how they’re written. All of them have their own little stories, no matter how small or trivial, including the secondary NPCs – like that one street punk who is secretly a member of a VIP club, or a homeless canine with a passion for cooking that dreads the food he gets from ration cards. It’s really fun to get to know them, and it is always amusing to see how they play a part in helping Nairi in return for odd favors.

There are moments during conversation with NPCs when there are options for players to choose from. If you choose the correct one, the dialogue moves forward, but if you’re wrong and the character refuses to share their information, you’ll have to pick another option to try again. This light text puzzling doesn’t occur often throughout the game though, as most conversations are linear, moving forward merely by clicking through them. 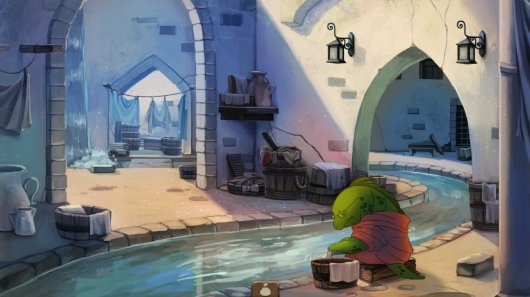 There seem to be two distinct sections of the city of Shirin, each with its own particular type of gameplay resulting in two completely different atmospheres and experiences. One is where you converse with NPCs and fulfill their requests by combining objects to move forward, and then there’s another set in a dungeon where you must solve a collection of intricate ancient puzzles. At first the discrepancy feels somewhat jarring and unnatural, restricting different types of puzzles to where they should and shouldn’t be. But after progressing further into the game, it finally made sense to me how the different tasks were designed to suit their respective quests instead of the other way around.

NAIRI seems to want players to first and foremost experience it as a story, instead of pushing nonsensical gameplay that would feel out of place for the sake of challenge.  The puzzles are generally limited to the more appropriate levels or locations in the game, usually occurring during the more magical parts of the story, such as when the protagonist has to learn about her divine destiny in the forgotten ruins of an ancient city. Pressing tiles in the right order to open a gate, numerical-based puzzles, and tablets with ancient languages that need to be translated are just a sample of the fun in these ‘puzzle areas’ where Nairi has to prove her wits. 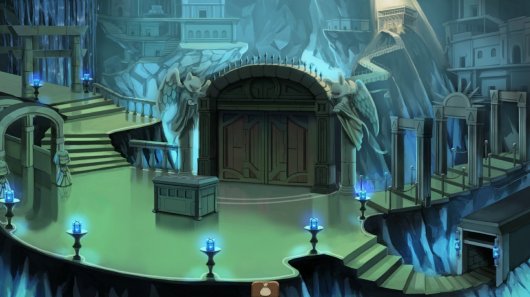 For about nine hours, I had so much fun adventuring through the lovely but mysterious city of Shirin. The only major downside is that the mystery that’s built up from the beginning doesn’t offer closure. There are some key characters that I thought were going to show up in the final chapters, but before that could happen, the game just ended. To be more precise, it felt like the story trailed off right at the calm before the storm, precisely when I was anticipating a finale with possibly higher stakes and danger. In fact, the endgame teases a whole new substantial quest still to come rather than wrapping up this particular adventure in a satisfying way. If this is meant to be just the intriguing start of an unfinished series, it really should have been touted as such from the beginning, as the seeds for an even bigger mystery have been planted here with plenty of room to grow and surprise us in the future.

Though it doesn’t feel like a fully completed work in its own right, NAIRI: Tower of Shirin tells a humble story with characters full of heart, offering a comforting fantasy adventure in a way that is innocent yet paradoxically mature at the same time. The puzzles are involved enough to keep you occupied, yet not too overwhelming for players who prefer something more casual. This game was clearly made for anyone who enjoys a good story (with lovable characters!) with some point-and-click gameplay goodness in their spare time. And since we’re left with hope for a continuation by game’s end, I can’t wait to find out how Nairi’s story unravels from here.

A fantasy tale with charming artwork, music and a wide spectrum of adorable characters, NAIRI combines a visual novel and point-and-click puzzle elements into a heartwarming adventure that isn’t fully finished just yet.

What our readers think of NAIRI: Tower of Shirin