Fairy tales and adventure games have long gone hand and hand, but in recent years those sorts of innocent, carefree fantasy quests have fallen out of fashion. Then along comes TSIOQUE (pronounced “chock”), which embraces the fairy tale milieu from the start, right down to the storyteller reading pages from a book, albeit subverting the common gender tropes in the process. While a twist in the narrative takes an unexpected and arguably unwelcome turn late in the game, prior to that I found myself utterly entranced by this colorful 2D point-and-click adventure from OhNoo Studio.

Tsioque is the young daughter of the Good Queen in a medieval-style kingdom (queendom?). When the Good Queen has to leave to fight the dreaded Phoenix, the royal wizard seizes the opportunity to take control of the castle, as viziers and assorted other right-hand-men-who-have-risen-to-levels-of-authority-even-though-they’re-completely-untrustworthy are wont to do. The flame-headed shadow wizard has Tsioque thrown in the dungeon so that he can have some peace and quiet to study his arcane magics. The young princess is not your typical damsel in distress, however. She has no intention of waiting for a Prince Charming to rescue her. As the game opens, you will first guide Tsioque to escape her cell and then on her journey through the castle in search of a way to stop the evil wizard.

From the start it’s apparent how lavish the production values are. Hand-painted backgrounds are lovingly detailed and composed of multiple layers. This allows for some degree of parallax scrolling within the locations to give them a greater sense of spatial depth than is typically found in adventures. You’ll explore all the rooms of the massive stone keep, including the snug dungeon, the spacious courtyard, the drafty parapets, and the cluttered kitchen. Besides Tsioque herself, these environs are inhabited by a wide array of cute animated characters, including a standoffish cat, a tentacle creature in the basement, a zebra steed, and the wizard’s imp guards. All are animated with a fluidity that’s seldom seen in 2D games and they frequently perform extra gestures in the background, such as when one imp is plotting to pop a blown-up a paper bag behind another on the castle walls. 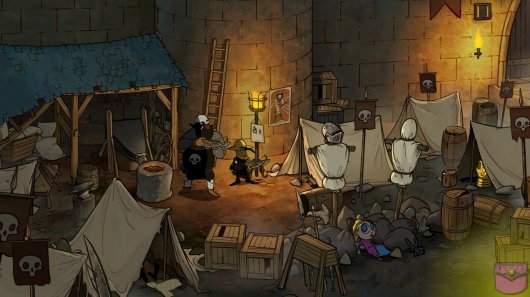 Equally impressive are the sounds heard throughout. Tsioque’s journey is accompanied by a suitably minstrel-ish instrumental soundtrack. Ambient effects also abound, ranging from the simple clicks of the princess’s heels as she wanders the castle, to the intentionally unintelligible mutterings of the imp guards, to the broader cacophony of explosions and wizarding duels in some of the game’s animated set pieces. There are few voices other than the storyteller and the evil wizard at key moments, whose voices both sound appropriate for their respective parts. The princess herself never says anything, conveying her feelings largely through the expressiveness of her big round eyes, which are mostly set in a determined grimace but also show worry, concern, and joy at various times.

Within any given scene, the little protagonist usually stands in one place, only moving when a hotspot is clicked to be interacted with or when exiting a room. Tsioque can collect items in a purse that is accessible from an onscreen icon in the bottom right of the display. Early on, there’s a limit on the size of objects she can carry, and one of her first challenges is to find and repair a magical purse that is bigger on the inside than out so she can grab larger things like bits of armor for a disguise. At first, progress is linear through individual rooms, but this opens up as the adventure continues, with multiple puzzles and their pieces found scattered around the castle, though never to an overwhelming degree.

Aside from simple left-click interactions and using the occasional inventory item, TSIOQUE also features a number of special puzzle sequences with their own interfaces. One requiring directly guiding a sewing needle through two adjoining pieces of cloth to make stitches particularly caught my fancy as something I’d never encountered in a game before. Elsewhere, another challenge involves waving a wizard’s wand in a variety of simple patterns – left, right, arcs, and so on – to summon different visions on a magic mirror. 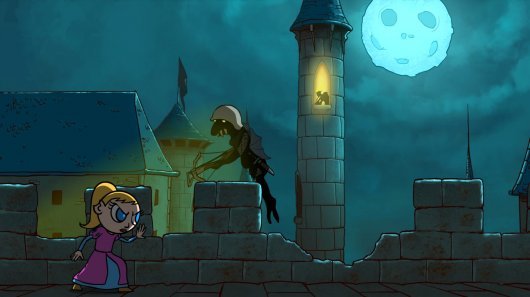 And then there is the action sequence. At one point the princess finds herself running down a tower, trying to escape one of the imp guards. This segment plays as a Quick Time Event, with different circles representing her footsteps appearing on screen that need to be clicked rapidly. Fail to click on a circle in time and Tsioque trips and is captured, which restarts the sequence over from the very beginning. Fortunately, the developer included a skip button to bypass this scene, similar to how some of the old Sierra games would let you move past their arcade sequences.

Although the stair challenge can be avoided, no such option is provided for the various timed puzzles sprinkled throughout. Most of these involve evading or hiding from guards after passing some other obstacle that alerts them to your presence. These sections are more about clicking the correct area at the right time than actual manual dexterity. For instance, at one point a boss imp starts rolling his subordinates down a flight of stairs to trip Tsioque in order to capture her. It is necessary to click above or below the princess at the right moment to make her jump or duck appropriately while working out which other hotspots to use in order to stop the boss.

In any of these timed activities, failure to act at the right moment means the princess gets caught. After a brief cutscene showing this, the game returns to the beginning of the sequence in question for a do-over. No major progress is lost, which is a good thing as TSIOQUE only features a single autosave. While restarting these events is fairly quick, I found it still took several tries to figure out the correct sequence of moves to get through many of them. 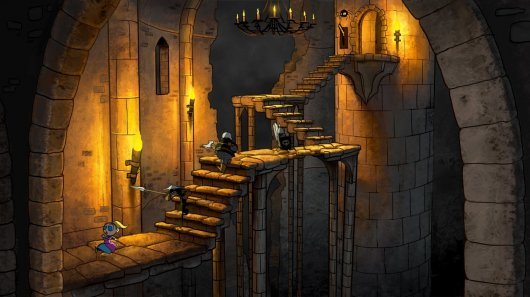 This trial and error design extends beyond the timed challenges. Throughout the game there are various points where it’s necessary to interact with items just to find out what they do. Quite a number of these lead to Tsioque instantly being captured and the scene restarting, which interrupts the flow of the game on more than one occasion. While I didn’t make a point to count them, it felt like it was about 50/50 in terms of obstacles that I could think my way through and ones that I had to solve just by experimenting. Your mileage may vary.

For those puzzles I could figure out through the application of my little grey cells, most are fairly straightforward, although there were a few that I had to put on hold for a bit while I thought about them. Fortunately, in these instances I was able to go and work on other unrelated challenges instead. Even with some timed sequence restarts and certain puzzles giving me pause for reflection, the overall experience is not especially long, coming in at about three hours of play time for me.

Fitting for a fairy tale, TSIOQUE is focused more on immediate events than any great depth of story or characterization. While there are narrative moments here and there as the wizard gets annoyed at his minions and the princess for making too much noise, for the most part it’s left to you to progress through the various obstacles before you to reach the final encounter with the dark wizard. 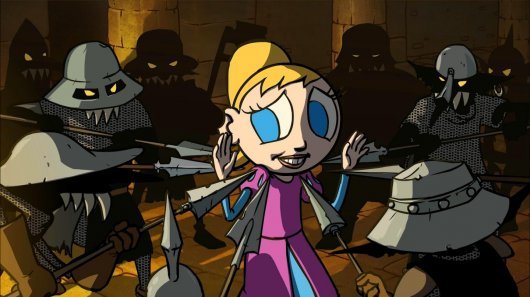 It’s shortly before that confrontation that the game shifts away from its original storytelling focus with something of a twist. Now, I’m not talking anything on the level of the cringe-worthy “it was all a dream” cliché, but the change is…well, it’s something that I suspect people will either appreciate or dislike, with very little middle ground. For myself, it induced a crinkled-nose “Really?” of annoyance that stuck with me through the rest of the game. The challenges were still there, and the fantastic animation. All of what I’d come to appreciate to that point, but in some fundamental way the game had lost me.

TSIOQUE deserves a strong recommendation, just with some reservations. It has so much going for it. It has gorgeous graphics and fluid animations, accompanied by suitably atmospheric audio throughout. It has some clever puzzle mechanics, an action sequence that’s balanced by being skippable, and timed challenges that reset upon failure rather than losing significant progress. But it also has lots of trial and error and a narrative shift that didn’t click for me (though it may for others). On the whole, then, for the most part it feels like a fairy tale done right, and even though it’s not quite a happily-ever-after ending, it’s definitely still a happily-for-long-enough journey overall.

TSIOQUE’s late game story machinations are a bit of a pill to swallow, but they aren’t enough to overshadow what is otherwise an enjoyable, gorgeous fairy tale adventure.

GAME INFO TSIOQUE is an adventure game by OhNoo Studio and Smile released in 2018 for Mac and PC. It has a Stylized art style, presented in 2D or 2.5D and is played in a Third-Person perspective.