I was a pretty big fan of Anate Studio's dark and poignant point-and-click adventure Little Kite. Although the game had a few rough edges, the overall experience left quite an impression on me, and I'm always quick to recommend it to those who are looking for a title that doesn't pull any punches. When I learned about Repentant, the semi-sequel/spin-off of Little Kite, I expected more good things, especially since its indie developer decided to incorporate full voice-over work and cutscenes this time. Unfortunately, while there are indeed some positives sprinkled throughout the game's surprisingly short two hours, overall it seems like a massive step backward. It isn't a total disaster, but it feels rushed and somewhat incomplete, almost as though Anate had some really good ideas that it couldn't fully implement. In short: It's a disappointment.

Instead of continuing the story of Mary and her son, Repentant decides to explore what happens to her abusive husband Oliver once Mary kicks him to the curb. Three years after the events of Little Kite, Oliver is still struggling to come to terms with his divorce. His ongoing obsession with his ex-wife leads him to harass her over the phone; he even spends the few remaining coins he has in his pocket to call her from a payphone outside of a shady convenience store. After getting blown off by Mary yet again one night, Oliver unwittingly wanders into the store and into the middle of a robbery. With a little ingenuity, the recovering alcoholic manages to defuse the situation – but in the process ends up making the situation worse.

The convoluted murder mystery that unfolds beyond this point is interesting enough but more than a little implausible, even when you try your hardest to suspend disbelief. And while I'd hoped Oliver would overcome his personal demons and emerge as a hero in this tale – the developer has certainly tried to make that happen for the guy – he's such an unlikeable person that it's difficult to get in his corner. He’s pretty repulsive, and there’s no getting around it. 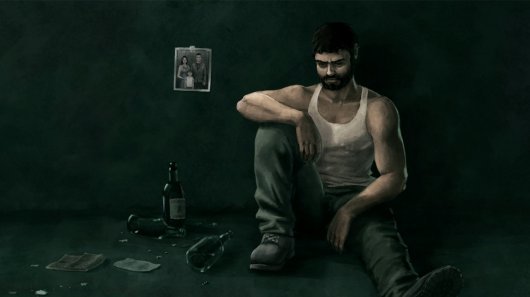 The good news is that Repentant features the same eye-catching hand-painted artwork found in its predecessor, and it's just as effective here. Every scene (though there are admittedly very few) has been painstakingly realized in muted, dreary colors to help immerse you in this grim world. The area outside the convenience store looks dangerous, imposing, and a little filthy. Inside, the setting recalls mom-and-pop shops off the beaten path, places stuffed with products, drinks, and booze for a trip down the backroads.

It's fun to take in your surroundings at first, though you'll soon find yourself backtracking to the same screens more than once to collect items you couldn't access earlier. It's a frustrating way to pad out a game that you can still easily complete in under two hours. Be that as it may, this backdrop comes packed with foreboding atmosphere; as soon as you step foot through the door, you know something terrible is about to happen. It's such a shame, then, that the game becomes a mildly predictable (albeit dark and shocking) excursion into themes of crime, punishment, and how life just sucks sometimes.

The few people who inhabit Repentant are also well-designed. Although the character animations are a little stiff and robotic, you can still get a very good idea of what an individual is all about by simply looking at them. Some might argue this is due to a reliance on stereotypes (of course the bald, grouchy guy at the convenience store has homicidal tendencies), but since this game doesn't delve too deeply into backstories, this allows you to draw conclusions based on context. You can tell that the slouched, sullen, and forlorn girl in the hoodie has a pretty dark history even before she reveals her struggles to Oliver. Again, the game doesn't delve too far beneath the surface, but between the limited information you're given and the character model itself, you can fill in the blanks without it. 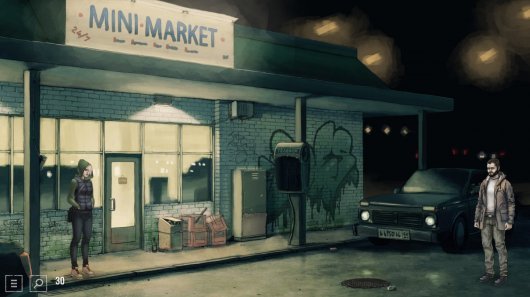 The problem with the cast is that the dialogue stays pretty dry throughout, and the flat, uninspired delivery by the actors occasionally makes it sound worse. Even the musical score, while serviceable, doesn't really do much to increase the tension, build atmosphere, or enhance the story significantly – it's just kind of there, for better or worse.

With its gritty presentation and mature themes, it's easy to see that Repentant wants to tell a meaningful story about loss and redemption, and occasionally it works. Unfortunately, the aesthetic far overmatches some very uninspired gameplay.

The experience doesn't deviate from your typical point-and-click adventure setup: you examine hotpots and use acquired items from your inventory (displayed at the top of the screen) to solve puzzles. You can also engage in conversation by clicking on the other characters, which brings up a handful of topics. While the mechanics are fine, the way the puzzles have been structured left me a little frustrated. For instance, it's pretty obvious that you need to pick up a bowl located toward the back of the store, but the game won't let you take it until the story requires it. Want to stash it in your inventory and save it for later? Nope, sorry. And although Oliver says he doesn't need it, guess what – he will later. Telling the player that an item isn't useful when you will require it later feels like a blatant misdirection that's clearly meant to guide you through the story in a very specific way. But when you know you're supposed to interact with an object (it has its own hotspot, for crying out loud), preventing you from doing so until the game says it's okay feels awkward. 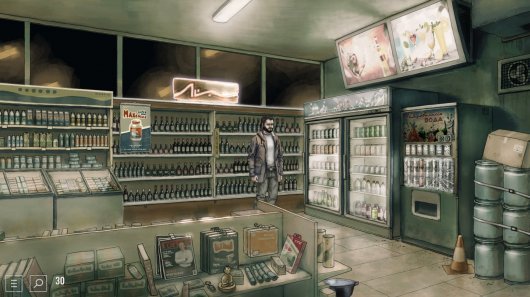 The puzzles themselves range from fairly simple to downright bizarre. Without giving too much away, Repentant opens with Oliver attempting to use a payphone. While we can clearly see the payphone thanks to the lights positioned around the exterior of the convenience store, Oliver cannot operate the phone. He's having a lot of trouble seeing in the dark, apparently, so you'll need to devise a way to shine some additional light on the matter. What follows is one of the most agitating puzzles I've encountered in quite some time. In fact, I spent probably a third of my playthrough trying to figure out how to get Oliver to see that payphone properly. Unfortunately, I never did solve this puzzle in a logical way; instead, I used every item in my inventory with every available hotspot (and the game only allows you to highlight the hotspots on-screen so many times) until I finally managed to get things in order. The end result felt completely absurd, though it prepared me for another handful of puzzles still to come that would require a certain level of insanity to unravel.

To make matters worse, there's a little pixel hunting involved as well, though it's not too terrible. You might have to search around the detailed backgrounds for a bit, but the art is distinct enough that these items stand out once you know what you're looking for.

As a follow-up to Little Kite, Repentant had a lot to live up to. The first game felt so alive, and it tackled its subject matter in a raw and unconventional way that felt engaging and honest. This spin-off/sequel, on the other hand, forces us to step into the shoes of a very nasty man who harasses his wife and clearly still has rage issues. It's a weird perspective for an adventure, but if handled with the same care and class as last time, the new game could have delivered a story that dealt with these issues in a very mature manner. Instead, we get a small-scale murder mystery, some light redemption, a guy with a protein drink addiction, frequent backtracking, and one of the most convoluted puzzles I've ever encountered. Although it looks fantastic, there's simply not enough substance underneath to make this game anything more than a passing curiosity for those who appreciated its predecessor.

Although it sports some incredible artwork and a few interesting plot twists, Repentant doesn’t come close to achieving the heights of its predecessor, Little Kite.

GAME INFO Repentant is an adventure game by Anate Studio released in 2018 for Mac and PC. It has a Stylized art style, presented in 2D or 2.5D and is played in a Third-Person perspective.

What our readers think of Repentant

Wow what a ride! Oliver, the wife beater from the prequel "little kite" is back! He's not the 2 dimensional cliché bore like in the previous game. Repentant is pretty short (1-2 hours) but it's... Read the review »