We get a small commission from any books sold.
All Bitmap Books
Written by
Merlina McGovern — August 1, 2018

When summer days are hot and sticky, a cool island breeze is a welcome respite. In Shrug Island: The Meeting by Tiny Red Camel, that breeze carries notes of mysterious music and whispers of hidden artifacts. Here the aesthetic is tropical and charming, and the puzzling is just challenging enough to keep you engaged. A short wisp of a story may be a bit on the thin side, but players will meet a variety of sweet characters and are in for a series of pleasant watercolor scenes to explore.

Sparkling island music with sunny wind instruments greets you as you first encounter this colorful place. You’ll witness a short introduction revealing the origins of Shrug Island; in the background, a woman’s deep voice chants softly. The isle’s ancient history is revealed through simple drawings in the sand, with each chapter washed away by rhythmic, lacy waves – echoes of the stories we ourselves learned about prehistoric peoples through their cave drawings.

Though the island was once vibrant and awake, it has fallen into a slumber, with most of its populace leaving the rising waters. Now a watcher over the island calls back two former inhabitants that he calls shrugs. You never really learn why the people are called shrugs, or who the man telling you this story is, but the focus of the game is not about reality and details. The main characters never speak, and you’ll learn no more about them as individuals. Instead, the island vibe is more about beauty and music and feeling. 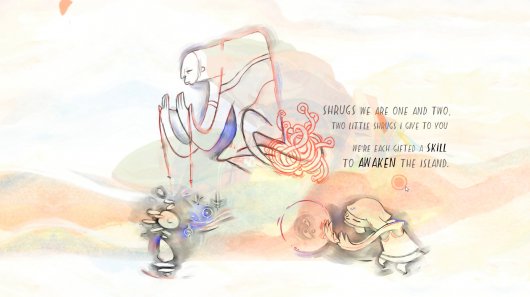 These two particular shrugs, Shri and Li, have been gifted with the skills that can awaken the island once again. At the start, you’ll witness both characters just a cliff jump apart, but neither can reach the other for the moment. Their reunification, it seems, is the key to bringing the island back to its full splendor. In the short adventure that follows, you must figure out how to help the two shrugs navigate the island and find a place to finally meet, but doing so will require that they each solve their own puzzles to locate a place where they can find common ground. You’ll be able to play as both characters, and clicking on a small icon in the interface will allow you to switch between the two. If you find that you’re stuck with one character, try clicking the icon to switch to the other to carry on.

When playing as Shri, exploring the environment reveals that he has access to the powers of music. By solving music memorization puzzles and by listening closely to instructions given to him by other characters he meets, Shri uses notes to interact with the world around him. Performing these musical tasks shapes the world around him, lowering or raising stones, unlocking passageways, and lowering or raising water levels.

Li has her own special power; activate it and she’ll be granted a special vision that allows her to see both incomplete objects that must be fixed, and to search each scene for those missing pieces. As you get further into the game, you’ll also find that you may need to rotate the pieces Li finds to make them fit, although that is the extent of each puzzle’s complexity. While you’ll collect the separate pieces you find in a quick and temporary inventory, you’ll never keep any other objects. If another character says that they need something for their instrument before they can help you, for example, that item will just magically appear when you solve the corresponding incomplete object puzzle – you don’t actually go out and search for the item required. 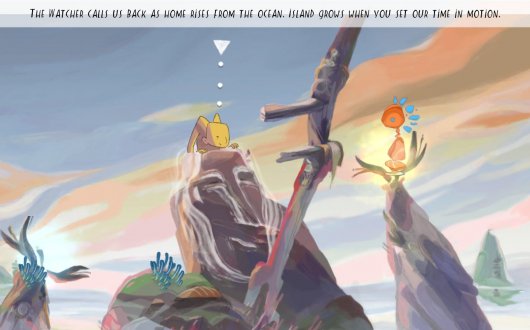 Exploring is half the fun of Shrug Island, as the hand-painted watercolor visuals are soothing and pretty. Darker greens and browns of organic island flora and fauna are warmly lit with swirls of bright yellows, pinks, and pastel blues. Lavender and cool blue shadows interplay with cream-colored highlights on rocky pedestals that fly high up into the sky, with Li, all red hair and piercing blue eyes, perched precariously atop one. Shri, with a shock of blue hair, sits on rocks that look vaguely like fish, sprouting waving plants from their open mouths. I also loved how, when double clicking on Li or Shri to access their special skills, their physical form also transformed. The animations for Li growing multiple arms and waving them in a trance-like state or Shri morphing into a beautifully colored manta ray-type sea creature as he enters a flooded cavern are wonderful.

The plants and critters you encounter aren’t just there for their looks. Pay attention and you’ll notice that anemone-shaped tufts of plant life indicate the way forward. These directional indicators and entrances and exits from one scene to another aren’t always clear, though, and I spent a fair bit of time wondering what to do next before realizing that I just hadn’t exited a specific way to find a new scene. The game does have a map with a quick travel function, but that will only take you to areas you have already visited. However, the game is so short, with just a few scenes to traverse, that I never felt the need to use it.

In this soothing tropical setting, you’ll meet a variety of characters who’ll ask you to help them out with an objective, like clearing away pesky crabs, opening up a passageway locked with a series of runes, and other tasks before they allow you to pass through their area. These characters range from grey, near-featureless hulking men banging rhythmically on rocks with stone hammers to a lone Picasso-esque woman, kneeling in soft shadow and waiting to play music for you. 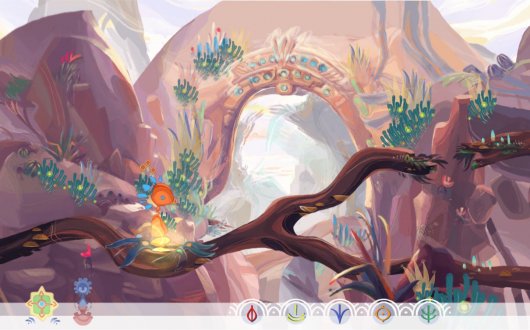 Many of these characters are playing or waiting to play instruments, making Shrug Island a very melodious experience. This land is full of music and rhythmic, relaxing sounds, with wind instruments and soft chanting interweaving with the trickling sounds of water or winds blowing.

Good thing for the calming sounds during one puzzle in particular, which can be quite trying. Shri and his musical ability to commune with the environment start off with simple challenges. Whenever he enters his musical form, a series of notes appears. One scene where you have to move from one end to the other has you clicking on those notes and determining which note moves which rock or obstacle. At other times, he simply has to click on his notes to mimic the order of additional notes as they appear in the environment or that were given to him by an islander. All this is fairly straightforward until confronted with a memory puzzle with ten-plus items to remember. I resorted to brute force note-taking to solve the puzzle as I didn’t really see any clues to figure it out any other way. Click one wrong note, and back to the beginning you go. 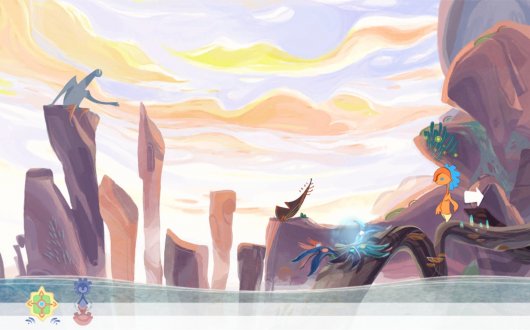 Most of Li’s puzzles are simple search quests, following the same pattern of finding incomplete objects and then the pieces needed to complete them. The imbalance between the variety of Shri’s puzzles and the repetitive nature of Li’s seemed like a missed opportunity to me. Adding more diversity to Li’s skills and puzzles would have improved the mix of activities and added more depth to the gameplay. What does represent a nice bit of puzzling, however, are the times when you might have to solve a puzzle as Shri, reshaping the environment, before Li can move forward, and vice versa, providing a nice bit of interplay between the two.

Despite that one tedious puzzle, most obstacles prove fairly simple and easy to overcome. There is no real challenge presented, but that seems to be the point. It was a relaxing, meditative hour and half that I spent exploring and witnessing the painterly beauty of an island far away from the stresses and strains of real life. The lovely interplay between island, music, and the two playable shrugs was a ray of sunlight that I quite enjoyed basking in while it lasted. If you’re looking to get away from it all, if only for short time, consider taking a brief vacation to scenic Shrug Island.

Shrug Island is a short but scenic getaway with a tropical sorbet-flavored design that provides a relaxing experience of gentle puzzling fun.

GAME INFO Shrug Island: The Meeting is an adventure game by Tiny Red Camel released in 2018 for Mac and PC. It has a Stylized art style, presented in 2D or 2.5D and is played in a Third-Person perspective.

What our readers think of Shrug Island: The Meeting