Some deeds simply can’t be excused or forgiven, no matter how much you try to repent. Instead, the only way for justice to be served may be for a masked maniac to drag your unconscious body to a derelict prison to participate in a sadistic game of death and survival in order to inflict a deserved amount of punishment on you. At least that’s the idea behind Stonewall Penitentiary, Unimatrix Productions’ latest entry in their somewhat-interconnected series of adventures. It’s hardly a feast for the eyes and ears, but it provides an entertaining murder mystery by combining light puzzle and player choice elements with a narrative that keeps you guessing, along with some optional world building for those willing to delve into its nitty gritty.

William Thane is a broken man, a father whose family was torn apart some time ago after a tragic accident claimed his son’s life. Facing a devastating reality, Will turned to drinking and his life continued on a downward spiral. This is the state of affairs the night he wakes up locked in a cell in the eponymous abandoned jail, naked and tied up, with no memory of how he got there. Will soon finds he isn’t the only person in the same predicament when he and six others are addressed via a prerecorded TV transmission by a masked madman calling himself the Judge. It seems the Judge knows things about each of the captives’ past, things they’ve never shared with anyone. Now they have six hours to confess their sins and be set free, or else be picked off one by one every hour and killed in gruesome ways. As narrative trope dictates, rather than cooperate and come clean, the group divides and clams up, as each one suspects the other of secretly being the Judge.

Stonewall Penitentiary is a point-and-click adventure game that relies heavily on the interplay between its seven prisoners, as well as plenty of puzzles to be solved along the way. Told primarily in first-person slideshow perspective, with the exception of a few scenes, the psychological thriller focuses on the stress of these seven strangers with varied personalities dealing with mortal danger and desperately searching for an escape. 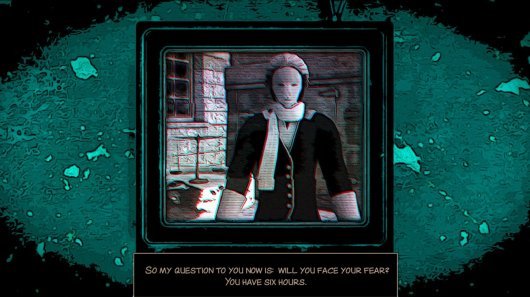 In-game time advances an hour at predetermined moments in the narrative, but it’s been laid out in such a way as to feel fairly natural, with each hour that ticks by taking about an hour to play through in real life. The characters spend their time investigating the prison for possible exits, and you never know who might be forming secret alliances or whether somebody is the traitor in your midst. It quickly becomes evident that everyone has something to hide, and the slowly unravelling secrets are one of the story’s highlights.

True to his word, the Judge begins to take out his captives one at a time, both marking the passage of time and splitting the game into six unofficial “chapters.” As each of these often violent murders occurs and the circle of survivors gets smaller and smaller, players will naturally form their own theories for who the killer is. The fact that the very next victim may be the one you suspected of being the villain should keep most players on the edge of their seat as the hours count down to zero. The Judge himself even makes a few appearances, triggering frantic chase sequences full of manic clicking to get to safety.

Though the story is competently written, some of the cast is a bit clichéd, some moments too predictable. A few subtler twists and turns would have been appreciated, though I must admit that the mystery of the killer’s true identity certainly had me stumped, and when the game flat out asked me, near the end, who I believed to be the killer, I found myself duped into choosing the one that turned out to be a red herring. Even with a few “told you so” moments mixed in, following all the twists and turns to the end makes for a satisfying plot. 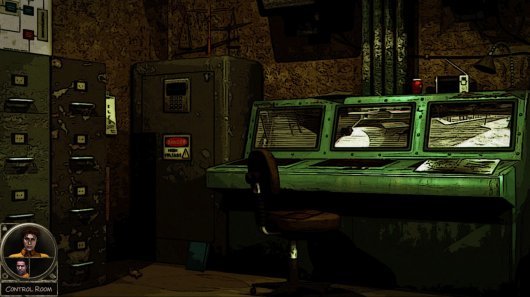 As the night goes on, the seven (or fewer) prisoners are forced to rely on each other to progress, even as their suspicions about one another grow. Right out of the gate, Will must team up with the young woman locked away next to him just so the two of them can escape their cells. Once free to roam, Will sometimes explores Stonewall on his own, other times teaming up with one or two others. Players are given decisions to make from time to time, some of which can influence how conversations run or affect Will’s relationship with other inmates. Although there are two possible endings depending on key life-and-death choices you make throughout, the majority of the game is linear, with most decisions only branching the narrative for a short while before it converges back to its inevitable track once again. It is possible for Will to die a handful of times, but the game simply restores you to the point just before his demise.

Puzzles are integrated regularly throughout the seven-or-so-hour campaign, ranging from traditional inventory-based obstacles to a number of “crack the code” puzzles that require careful examination of surroundings and journals to gain access into sealed lockers, drawers, and the prison’s system of electronically locked gates. There is a decent level of challenge here, with some puzzles being on the easy side and others requiring at least a little thought and effort. Everything is nicely balanced, eliminating potential frustration, and the game moves at a pretty constant clip because of it, though the nature of the prison’s layout, along with its locked doors and gates, does necessitate a bit of backtracking. The only things tarnishing the gameplay are the chase segments that require fast clicking to get away from the killer, and an uninspired minigame in which you have to click the mouse at just the moment an on-screen meter fills completely to perform particular actions.

On a presentation level, Stonewall Penitentiary unfortunately comes up more wanting, with graphics and audio that leave much to be desired. The stylized environments are probably the high point, resembling a graphic novel somewhat but easily recognizable with plenty of hotspots to examine. Potential items of interest are distinct, eliminating the need for pixel hunting in all but one notable occurrence during a certain late-game puzzle. Character art is a different matter, as excessive shading and contouring makes for extremely muddied complexions and unappealing models. 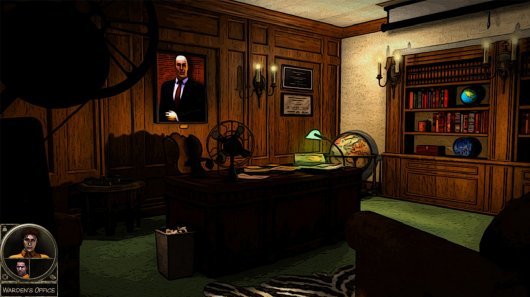 The voice acting, over-the-top and hammy at the best of times, doesn’t do the cast any favors either, and in the case of lead protagonist Will, makes it difficult for the player to form that important connection with him. Musically, this game does deliver the goods, meaning the soundtrack often stays in the background with dark and foreboding scores suitable for a murder mystery, occasionally swelling to something more pulse-pounding for moments of lethal danger.

Stonewall Penitentiary is part of the developer’s larger, ongoing Storycentric Worlds universe (also comprising Lifestream, Shady Brook and The Filmmaker), and therefore contributes a fair bit of world-building. Although the game can easily stand on its own, certain characters from previous adventures do make repeat appearances here. The same is true for the story, as the plot is a self-contained whodunit, but there are some narrative threads connecting this game to those that came before and will come after. 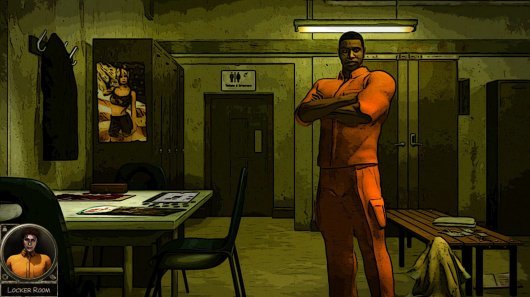 To that end, there’s a fair bit of optional backstory to unearth, much of it in the form of journals and diaries of ex-prison staff and inmates, and newspaper clippings that delve into the penitentiary’s history, as well as its mysterious warden and the rumors surrounding inhumane experiments performed in the dead of night on the prisoners in his care. There are entire sections of the game that are completely optional, only helping to flesh out the background, rooms hidden behind puzzles that can easily be missed, and a classic point system that unlocks a bonus scene for players with a keen eye for detail.

Stonewall Penitentiary is undoubtedly a good time, a psychological murder mystery that combines compelling world-building and engaging puzzles with a choice-supported narrative that will keep you interested (and guessing) until its resolution. It’s desperately in need of a fresh coat of paint, both in the visual and voice-over departments, but this shouldn’t deter players from experiencing its haunting, if not particularly subtle, mystery.

Stonewall Penitentiary offers an interactive thriller of murder and paranoia in an atmospheric setting filled with the tortured ghosts of its past. It looks fairly dated and certainly doesn’t tread any revolutionary new ground, but it succeeds at what it sets out to do: to be a satisfyingly entertaining experience from beginning to end.

GAME INFO Stonewall Penitentiary is an adventure game by Unimatrix Productions released in 2018 for PC. It has a Illustrated realism style, presented in Slideshow and is played in a First-Person perspective.

What our readers think of Stonewall Penitentiary