We get a small commission from any books sold.
All Bitmap Books
Written by
Cathlyn Vania — June 11, 2018

‘The Thin Silence has strong themes of depression, suicide and negative mental health. Please be aware of your own inner state while playing.’

I was quite nervous when I read this warning. Would the game be so disturbing that I wouldn’t be able to finish it? After playing on and off for a total of seven hours, I can safely say that I survived. With its vivid take on what it feels like to have to constantly battle your inner demons, The Thin Silence is a solid, moderately challenging side-scrolling adventure at heart. Indie developer TwoPM cites Limbo as one of their inspirations, though this one is executed in a more relaxed manner and with much less gory visuals. Fortunately for my inner state, its unique object-combining mechanism made for an unexpectedly fun experience, tastefully infused with a brave portrayal of loneliness and mental struggles, though it's not without a few narrative frustrations along the way.

Players control Ezra Westmark, an ex-soldier who shuts himself off from the outside world after a series of traumatizing events that took countless lives, including his friends and comrades. No matter how hard Ezra tries to forget the past, it keeps coming back to haunt him and he soon finds himself tracing back to the places he’d been trying to avoid. We follow along as Ezra reconnects with his fear, learning a little about his history through ongoing events, collectible items, and even flashbacks to his military days. From the depths of an abandoned bunker to the top of a serene mountain, Ezra is continuously confronted with his own denials and bitter memories, fighting to shoo away negative thoughts and suppress his conscience through tormented private monologues as you try your best to get him to his next destination. 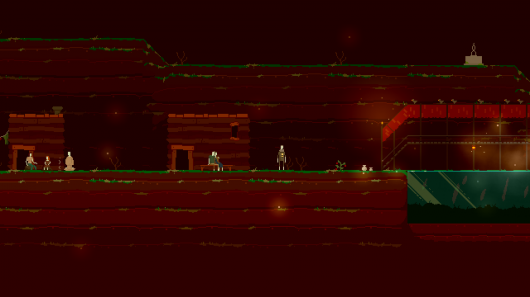 Ezra often holds conversations with himself, narrating his feelings aloud as he reminisces over old photos or other objects that evoke memories of his horrific past. When he meets another character, listening to their dialogs and stories is strictly a passive interaction. Even though it may feel like you have some control over the narrative bits and pieces you find scattered around (e-mails, letters, photos, book pages, etc.), the story itself is presented linearly because most events and cutscenes can only be triggered when you reach a certain location or meet a particular character. The only way to piece everything together is by moving from one scene to the next, solving a single puzzle at a time.

When I first started playing, I had trouble grasping the controls as they are a bit unusual. Ezra isn’t able to jump properly (he can only ‘jump a little’), and I was stuck for a while with only the left and right keys to move him back and forth. This limitation encourages players to utilize tools comprised of a number of items you find in your travels that can be combined together through a separate interface to create new objects such as a grapple. Soon enough, it became clear to me that the only way to move forward was to push or pull a rock to climb a hill, power a lever to get to an upper floor, or light up a fire pit to activate a bridge. It turns out that, despite the platforming-style backdrop, there’s not much jumping needed. In fact, there’s almost no dexterity required at all, just a steady click of the Q key to open up the tool list and a bit of trial-and-error in combining objects to solve the puzzles.

The Thin Silence’s minimalist pixel graphics might not grab your attention at first glance, but they are executed so well that you’ll eventually become absorbed deeply in both the bleak and beautiful environments. Aboveground the moonlight beams down on the odd waterfall, remote cabin and forest areas, while below, amidst the dark forgotten mines and deserted military labs, soothing elements like fire pits and dim corner lights can always be found to lighten things up a bit. There are even special areas where you can just sit by a cliff and let the camera move about slowly as you enjoy the view. (Puzzle-wise, these are also great spots to take a peek at what you’re up against moving forward.) 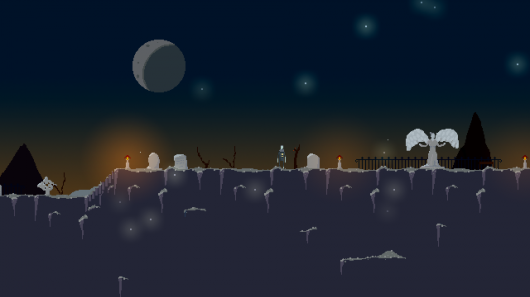 Color is used heavily to alter the mood, especially deep red and blue. Ezra spends most of his journey underground, where red dominates most and the image of a certain Dr. Mantha often appears to remind him to face his fears, usually when Ezra is at his lowest. It is in these moments when the more cruel aspects of the story can often be found, including images of dead bodies and hints of an experiment gone wrong. Blue is used more when Ezra is aboveground, where he contemplates and is generally in a calmer state of mind. I didn’t make the color connection until after I finished the game, though I did notice how much of a difference there was whenever I moved from place to place.

Along with the visuals, the eerie ambient score by Lightfrequency also plays an important role in building atmosphere. The haunting composition fittingly accompanies the stillness of Ezra’s broken world. It never takes center stage throughout the game, but at certain moments while trying to figure out a puzzle or when Ezra is dealing with the voices in his head, the music took me to a place that felt uncomfortable – not because it’s terrible, but because it made me empathize more with the protagonist. It also accentuates Ezra’s loneliness, as he has no one to talk to for most of the game. In the more relaxed areas, the score naturally transitions into something more tranquil, though still keeping an eerie flavor.

Each scrolling scene involves a giant puzzle to solve, where the goal is to basically find a way to reach the opposite end of the environment (left to right, right to left, upwards or downwards). Use a makeshift zipline to cross the cliff, or employ a rock as a step to climb higher up, and so on. The obstacles are generally quite easy to crack if you have the patience, though I had to peek at a walkthrough a couple times to help me out of some tougher puzzles. If you make a wrong decision and become stuck in your spot, Ezra will tell you he’s trapped, though this only happened to me once. But worry not, since there’s a reset option for every level, so whenever you feel like you’ve taken a fateful step, you can choose to be sent back to the last checkpoint (which is auto-saved every time you reach a new location). 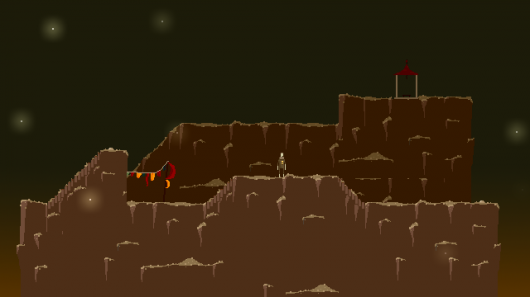 There are also some hidden standalone puzzles to solve that will unlock extra backstory details. Ezra can try to log into computers and will encounter either a word- or number-based puzzle, the former tasking you with discovering a certain word through hints provided (such as the length of the word or even another word that might relate to the answer), while the number minigame requires you to ‘connect numbers less than one different.’ These are presented in the style of an ancient DOS operating system and both are very simple to understand yet can be quite a challenge to complete at times. Once you successfully solve the puzzle, it unlocks the computer’s data and grants you access to other snippets of the past, before the disaster took place.

I found it thrilling at first to read every book chapter, letter, and e-mail, but it got a little overwhelming as I continued to learn about the war, a rebellion, and what exactly happened that made Ezra the way he is today. These bits and pieces of Ezra’s backstory never quite came together for me in the end, as I was left with only vague philosophical texts and disconnected scenes of Ezra’s troubled past. Right until the end, it’s almost as if none of the political conflicts truly matter, as the real turmoil to resolve here is Ezra’s current inner battle with grief and trauma. 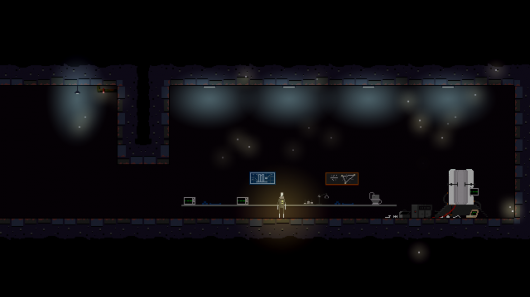 The slow pace of the game and a journey that’s more meditative than goal-driven allows The Thin Silence to produce some really moving moments. These are usually the ones that manage to ignite a hope or strength for Ezra to go on, which are done just right: a balance between passive cutscenes and interactive elements that make you feel as if you are pushing through the hurdles together with the protagonist. Its story conclusion might not be satisfying, but the adventure itself accomplishes its mission of talking about depression in a way that is both subtle and empowering.

In blending inventory combination, side-scrolling exploration and challenging psychological themes, The Thin Silence becomes something that is both familiar yet at the same time different from its peers (including its commitment to donate part of each sale to the CheckPoint charity). The visual style won’t be for everyone, and it’s a shame that the story doesn’t come together in a more coherent way, but this is a game that clearly comes from a very personal place, and along the way maybe even transforms into a form of therapy for players who share similar struggles in life, as well as a window for others to get a glimpse of the experience.

While it takes a few narrative missteps, The Thin Silence oozes raw emotion as it courageously bares the suffocating reality of depression and loneliness, yet still manages to be a fairly entertaining game in its own right.

What our readers think of The Thin Silence