The Council: Episode 1 – The Mad Ones review

Conversation is an important aspect of many adventure games. Whether providing key plot details or simply delivering a few jokes, character interaction is nearly synonymous with the genre. However, The Council takes this traditional element and kicks it up a notch. Instead of simply navigating your way through a series of dialogue options, developer Big Bad Wolf's 18th century episodic mystery treats conversations like battles in a role-playing game. If you don't have the right skills or a high enough level, you'll miss some opportunities to dig deeper into your counterpart's background or notice something about their personality that could help you down the road. While the overall experience suffers from some stilted voice acting and odd character designs, the series’ debut installment, The Mad Ones, is a refreshing and enthralling experience.

It’s 1793 when players take control of Louis de Richet, a young Frenchman and secret society member who's searching for his missing mother. Sarah de Richet was last seen visiting Lord Mortimer at his foreboding island estate, but she's since vanished. Although the staff has searched the island from top to bottom (or so they claim), they can't find a trace of her anywhere – apart from a few things she's left behind to suggest she’s in hiding. Determined to unravel the mystery behind his mother's sudden disappearance, Louis accepts an invitation to the next grand party being thrown by the English aristrocrat, where he encounters several prestigious historical figures (including a duchess, a cardinal, and even George Washington and Napoleon Bonaparte) at the sprawling manor filled with exquisite furniture and priceless artwork, not to mention plenty of intrigue. The more Louis explores the grounds and interacts with its inhabitants – each of whom seems to hide a secret – the deeper the rabbit hole goes.

A month before all this happens, The Council's prologue in Paris offers a hint of what's to come and how your decisions will have long-lasting effects on the protagonist and those around him. While tied up alongside his mother by a mutual adversary, Louis manages to break free. You then get presented with two choices: make a bold move against the foe or allow Sarah to handle the confrontation. One path leads to a clean getaway, while the other leaves Louis with a permanent memento of his encounter. This small moment shows that your actions can and will have permanent consequences on the story. While some are only cosmetic, others push Louis down different paths. 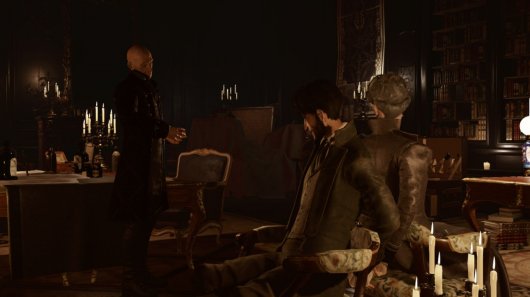 Once you arrive on the island, you have the opportunity to select between three different professions: diplomat, occultist, and detective. While the diplomat will have a much easier time navigating conversations than the occultist and, to a degree, the detective, he'll struggle when it comes to identifying other languages and unraveling scientific mysteries. The detective, meanwhile, will pick up on specific mannerisms and find ways to exploit the weaknesses of those around him. In fact, depending on which skillset you select, you'll find yourself locked out of specific sections of the game, requiring a completely different playthrough if you're eager to thoroughly explore the story. The next layer of role-playing involves the talents within each chosen profession that you can spend accrued points on, which focus your areas of expertise further. This expands the possibilities once again, and it's worth going back and replaying the episode from one or more different angles, especially if you feel you've missed an important piece of the narrative puzzle during your first experience.

The Mad Ones truly shines when you engage in confrontations, which require you to chat up a particular character in order to move the story forward. In one instance, Louis needs to convince someone to hand over a letter addressed to his missing mother. You can choose from a number of different responses, including a few that require Louis to utilize his special skills. Sometimes you won't have access to a particular option, depending on your profession and skill levels, so you'll have to read your "opponent" and select the right choice based on his or her personality. If you decide to get snarky about religion when talking to a man of the cloth, Louis might have a difficult time winning him over. These encounters aren't too difficult, and the game allows you to make a handful of wrong choices before the entire confrontation restarts, so those worried about possible "game over" screens can breathe easy.

Although you'll spend most of the game engaged in discussion, there are times when you'll get to explore a few areas of Lord Mortimer's sprawling estate, which you'll navigate using the WASD keys and mouse (or a gamepad, if you prefer). Clicking on other characters and interactive objects (highlighted by vague white orbs that come into focus when you draw near) will usually bring up a list of options, some of which are also dependent on Louis's current abilities. For example, the detective won't have access to a locked section of the wharf unless he finds a key, but the occultist can pick the lock and venture forward. Using skills spends effort points (the higher the skill level, the lower the point cost), which you can replenish using vials of jelly (a strange substance that our hero somehow knows will help him) hidden around the manor. But be careful: consuming too much jelly or other collectible power-ups that make using skills easier will have consequences, requiring the use of something called a Golden Elixir to correct. Knowing when to save your skill points and when to spend them requires a bit of strategy, especially when you're out of jelly. 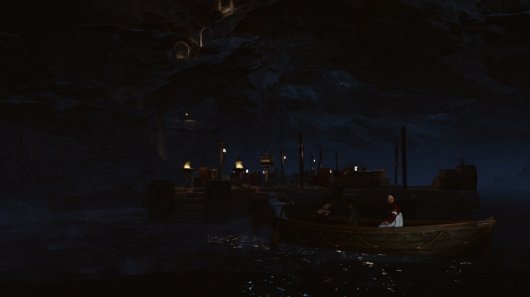 Confused? Don't be. While The Council presents a number of different rules and systems over the course of the first episode, the game does a wonderful job explaining everything in detail. By the time this installment wraps up – with a suitable cliffhanger to hook you into playing the next – you should have a solid grasp of how everything works. And if you don't, you can always settle in for another go-around. The Mad Ones takes roughly 2-3 hours to complete the first time through, so even replaying won't devour a large portion of your free time. You also have the option of reloading specific chapters if you want to revisit something in particular. Since you can’t solve certain puzzles without possessing certain skills – deciphering a foreign language or identifying a certain individual without having knowledge of politics, for example – tackling the game from a different perspective almost seems mandatory to get the most out of what’s available.

Graphically, the game is a bit of a mixed bag. Although the creepy island manor contains tons of iconic artwork from a number of famous painters, as well as exquisite furniture and lush decorations appropriate to the era, the characters themselves often seem a little odd. While Louis looks fantastic, his poor mother looks like a hellish mix of Angela Lansbury and some sort of mythical bird-woman with terrible skin. George Washington also suffers, though poor Sarah de Richet easily provides the most unintentional scares. The textures throughout hit a lot of high notes – the gallery is truly a sight to behold and the manor’s halls are adorned with intricately crafted rugs and glistening marble tile – so it's a shame that some character models are less appealing than others. They're not horrible, mind you, but the oddballs definitely seem a little jarring when standing next to their sharper counterparts. The animation, meanwhile, serves its purpose but it too has a few moments of unexpected wonkiness. 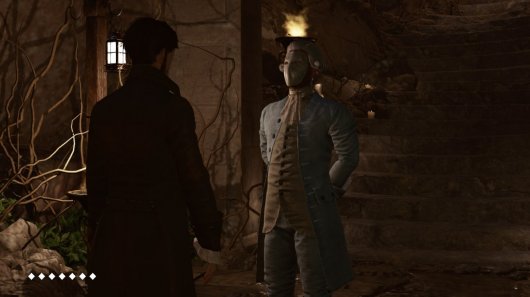 To make matters worse, the voice acting frequently sounds stilted, and at times the actors seem miscast. Louis certainly doesn't sound French, and his reaction to a number of situations provides a few misplaced laughs ("Mother! Your hand!" is a personal favorite). Unfortunately, you'll have to listen to him prattle on about anything and everything, making his voice work more than a little irritating as the game wears on. Since Big Bad Wolf built The Council around intense conversations, casting an actor who could handle the more dramatic moments would have strengthened the overall experience considerably. Again, the performance doesn't scrape the bottom of the proverbial barrel, but it weakens many of the exciting scenes somewhat. For all his effort to prove otherwise, I just don't buy Louis as a tough guy.

Despite these relatively minor shortcomings, The Council's first episode sets the stage for a compelling mystery set on a wonderfully realized island estate filled with enigmatic individuals. From the investigation of Sarah de Richet’s disappearance to the promise of shady dealings of a secret organization known as the Golden Order, this debut chapter of the planned five-part series has plenty to offer adventurers looking for something a little different from the genre. The dialogue confrontations work exceptionally well, and using skills to manipulate others and influence conversations never gets old. With some genuine replay value to boot, The Mad Ones has laid the groundwork for a potentially thrilling experience, one that will hopefully continue to deepen as subsequent episodes become available.

Although the role-playing emphasis may feel a little daunting at first, The Council shows great promise thanks largely to the gorgeous setting and unique approach to conversational encounters.

GAME INFO The Council: Episode 1 – The Mad Ones is an adventure game by Big Bad Wolf released in 2018 for PC, PlayStation 4 and Xbox One. It has a Illustrated realism style, presented in Realtime 3D and is played in a Third-Person perspective. You can download The Council: Episode 1 – The Mad Ones from: We get a small commission from any game you buy through these links.
The Good:
The Bad:
The Good:
The Bad:

What our readers think of The Council: Episode 1 – The Mad Ones