For a story starring a robot vacuum cleaner and a smart home A.I., the short but sweet Rumu showcases a wide spectrum of human emotions, which is a feat that not even many people-centric dramas achieve.

Readers rate this game as Decent.

Average based on 2 ratings

Are robots capable of developing feelings?  Will they ever be able to replace humans?

These kinds of questions have been endlessly discussed and explored at least since the dawn of computers. It is reflected in many works of fiction, depicting artificial intelligences and man-made sentient beings that often either become human-like or end up rebelling to take over the world. But for now, we merely wish to make our lives more convenient with the help of these advanced technologies. The titular robot of Rumu is one such creation, a smart vacuum cleaner that was created by his inventors to keep the house clean of spills and crumbles. But with every mess Rumu removes, we discover that there’s a lot more to this family than just spilled coffee on the floor. With its heartfelt narrative, slick presentation and simple point-and-click gameplay, this game manages to take players to the depths of emotion through a pair of thinking machines, with all the highs and lows that come with the full range of the human experience.

Playing as Rumu, we are guided by an A.I. called Sabrina in doing our daily tasks. Rumu has just been activated and is excited to meet his humans, while Sabrina is the more experienced (and definitely more responsible) smart home assistant. Sabrina acts as our source of narration, as she converses with Rumu and tells us all the things we need to know about the house. David and Cecily are away a lot, and Rumu is left with their clutter to take care of: socks on the floor, ants from the pantry, or that long-lost flash drive behind the couch. 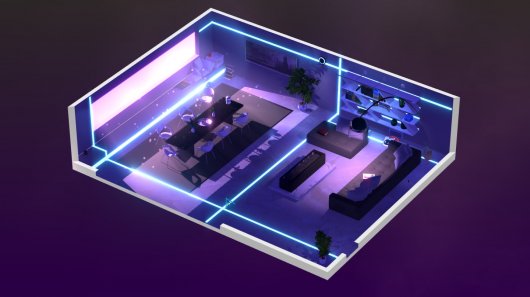 Navigating between household objects and listening to Sabrina comment on them is mainly how we get to know about the home owners. What’s lovely about Sabrina and her dialog is that, if you pay enough attention, her observations actually run deeper than cautious warnings and light jokes about how forgetful David is. Voiced by the talented Allegra Clark (Dragon Age Inquisition), Sabrina shows that she cares about the well-being of her humans, more than just an act of duty. She’s eloquent and oozes emotion in her charismatic robotic tone, while Rumu can only reply to her with the phrase: ‘I love…’, such as: ‘I love Sabrina’, ‘I love cleaning’ or repeating whatever Sabrina mentioned last.

At first it seems that Rumu isn’t built with any extra intelligence. But as the story progresses, it becomes clear that the only thing limiting Rumu from voicing more thoughts is simply that his linguistic programming is not as advanced. But Rumu seems to understand every word Sabrina says, and Sabrina can even interpret Rumu’s purely mechanical utterances and respond to him just fine. They’re like R2-D2 and C-3PO, home appliance version, which can be quite adorable from time to time.

Each room is presented like a discrete section of an open dollhouse. With an isometric view of the whole room, you can pretty much see every available object and path that Rumu can explore. You can’t zoom in, as the camera is fixed, but sometimes when encountering a note, reading an e-mail or examining a certain item, an automatic close-up will occur which you can then zoom back out when you’re done. That’s pretty much the limit of the camera feature, but you can toggle Rumu’s front lights on and off to see in the dark and sometimes reveal hidden messages on the walls. 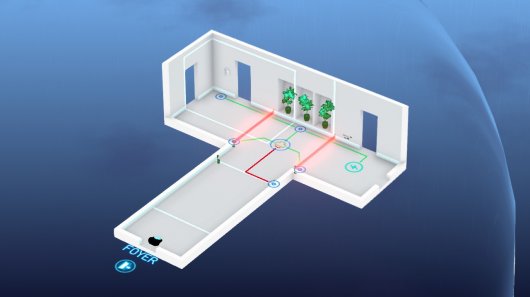 Moving Rumu is very simple with either the arrow keys or the mouse, though I used the latter throughout the game. All I had to do was hold and drag my pointer, ‘pulling’ Rumu to wherever I wanted him to go. As a vacuum, cleaning a mess is done just by making Rumu roll over it, almost like removing marks with an eraser tool. A percentage of each mess is displayed while Rumu is cleaning, so you don’t have to worry about not scrubbing the floor hard enough. If disposing of a mess is part of a particular task, it will show up on the list of objectives anyway, providing another way you can tell if the job is finished.

Sometimes Rumu is able to push objects around, which you can usually tell by the holographic arrow that appears when you approach the movable object. For example, when the arrow points north of a box, left-clicking the box will slide it one step in that direction. If you circle Rumu around to push it from the right side, an arrow pointing to the west appears. This mechanism is usually part of a mini-maze where Rumu is trapped among messy clutter and has to find a way out.

Clicking directly on Rumu checks three things: Journal, Inventory, and Objective.  Journal represents a collection of David and Cecily’s notes that can be found sporadically around the house, whether fridge notes, post-it reminders, or little things from different rooms that Rumu seems to be fond of. Inventory holds all the objects that can be picked up. They don’t always have any real purpose or impact the main storyline, but Rumu can be a little bit of a hoarder, as I figured eventually. Your objectives will probably be the most-viewed option even without clicking Rumu, since it pops up every now and then whenever a new set of tasks is unlocked. 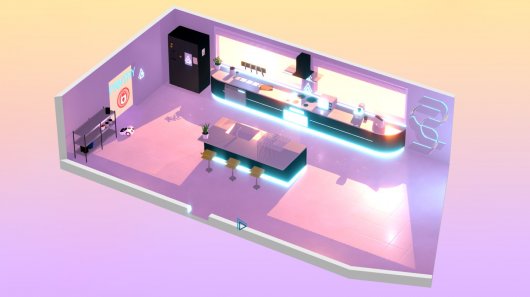 While the controls are quite simple, the auto-save system only works at the end of Rumu’s day, and since the game doesn’t seem to allow saving manually, the only option to take a break mid-day without losing your progress is by pausing. For some reason the ‘skip’ function didn’t work for me either, which meant that when I replayed any portion of the game, I had to sit through the dialogs again in their entirety. Rumu is a pretty short game, however, so even then the wait time was manageable.

The gameplay itself is a mix of casual exploration and light puzzling that can be as simple as clearing a path so Rumu can cross the room, or picking up clothes and putting them back in the wardrobe. One of less basic puzzles, though still fairly simple, is working out the power system. Upon pressing Shift, the current room turns white, leaving only active objects in green. A virtual map of the power circuits is shown beneath the floor, displaying all the cables that connect all the devices in that room. There are usually several T-connectors between the cables, which have to be properly aligned to turn the (unpowered) red lines into (powered) green lines. When green, the now-connected devices are ready to use (e.g. computers and other electronic devices), but that’s not always the main goal, as some rooms have other power requirements to propel the story forward. 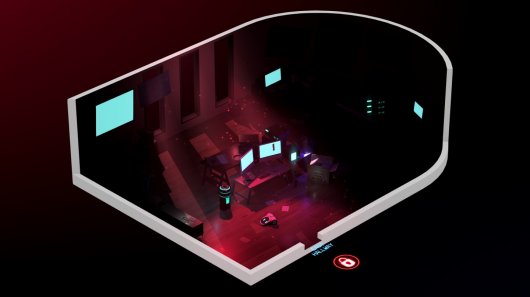 Each modestly-challenging puzzle serves as a part of the environmental storytelling, seamlessly thrown into your daily house-cleaning quests. Rumu ‘loves’ David and Cecily and clearly wants to meet them, but by the time the little vacuum wakes up each morning they have already left the house, so you are stuck cleaning new messes instead, or chasing Ada the cat who is partially responsible for the chaos. Fortunately, every day new rooms become available to investigate, as really the core point of the experience is not performing chores but rather exploration and discovery, with Rumu growing increasingly more eager to find out about his mysterious humans and their private memories.

As Rumu learns more about his creators, some of the new objectives seem to come from his own curiosity, more often than not even defying Sabrina’s cautions and warnings. While diligently performing his assigned tasks, Rumu stumbles upon secret passages that lead to older parts of the house: long-forgotten rooms filled with mementos that for some reason Sabrina did not want Rumu to find. The household tale that’s gradually unveiled becomes surprisingly poignant the more deeply Rumu probes.

Sometimes when bumping into an object or responding to Sabrina, Rumu lets out chirpy mechanical sounds to express his feelings. This adorable characteristic reminds me a bit of Pixar’s WALL-E, and his appearance somewhat resembles a robot that actually exists in real life: the Roomba, a round-shaped vacuum cleaner that is able to operate automatically or remotely. I’m excited by the idea that Rumu is almost like a reimagined, personified Roomba that may well be invented in our near future. 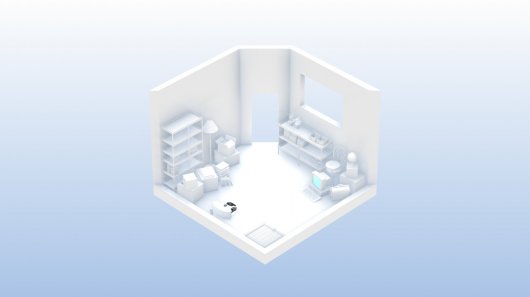 This sleek appearance of our tiny hero is echoed throughout the house, with its clean, minimalistic room design and accents of vivid neon glow along the floors and ceilings. In certain places the house can feel a little hospital-ish, with its bare white walls and uniform potted plants stuck in corners. Despite the pristine vibe, however, the living area mostly still feels warm and lived-in: an unruly closet and unmade bed, half-read books and reminder notes in the kitchen. All these small details manage to create a homey atmosphere in a building that is mostly being cared for by an A.I. and a bunch of smart home appliances.

Rumu’s adventure around the house is accompanied by Matt McLean’s ambient score, which matches well with the environment. Sentimental piano instrumentals can be heard in the more touching moments, with track changes so subtle you won’t even notice how intense and nervous you’ve become when Rumu is faced with a challenging problem or stuck inside a room as fast beats play in the background. It has this techno-thriller vibe that does a wonderful job of steering you into the desired emotions the designers want you to feel, moods that are further supported by the change of color in each room. The living room and its abundant sunlight (be it natural or artificial), for example, has a warm yellow and red palette that complements the soft, relaxing track in the background, while the laboratory has more blue and generally colder tones and is accompanied by more suitably chilling music. This beautiful harmony of elements grows even more expressive as we near the climax of the story, with glitching visual effects, fading sounds, blinding neon colors and vibrant hues used to great emotional effect.

It may seem odd that ‘emotion’ is the main takeaway from a game about robots, but from the beginning Rumu manages to deliver both an abundance and a variety of it, achieved by its clever visual design and voice talents that bring the characters alive, especially the role of Sabrina. This is a small game that only took me around four hours to finish in a relaxed manner, but it left me with bittersweet feelings that lasted long after it ended. Rumu gives us a sci-fi twist on a classic family tale that can be strangely relatable and might ring pretty close to the world we live in right now – about our relationship with technology, the people we love, and the lines in between.

Sherlock Holmes VS Jack the Ripper

What our readers think of Rumu

There haven't been any reader that reviewed Rumu yet. Please share your (short) verdict, a review or post your star rating!