How to shoot a criminal review

How to shoot a criminal is a full motion video game centered on the troubling direction of “The Revenge”, a free press newspaper in the 1930s. You play as Scarlett Eppledore, one of the key figures at the paper, who tries to remember mundane office meetings and editorial decisions that will allow you to discredit the paper’s founder, Aaron Williams. Why Aaron needs to be discredited is revealed over the course of four days. Contrary to the game’s title, you do not do any shooting – or pretty much anything else, save a series of typed Google-esque keyword searches necessary to recover articles printed by the paper that trigger your grainy and disappointingly dull live-action memories.

Presented in stark black and white with the occasional splash of red, How to shoot a criminal has a clean and distinctive look that carries throughout all aspects of the interface. Virtually the entire game is presented as a desktop on which Scarlett amasses various documents. Mechanically, finding these documents is simple enough. You type keywords into an edit field at the bottom of the screen and hit enter to make any documents the paper has on record that contain those keywords swoop in from the side. Documents can be dismissed again by clicking small “X” buttons on them in typical Windows fashion.

As you are free to enter whatever keywords you like, you have many avenues of attack to find the 83 documents available. Most are articles published by The Revenge, which when clicked enlarge on-screen and show an accompanying photograph. When the photograph itself is clicked, it triggers a video not of the article but of some random behind-the-scenes moment at the paper. We’re told that these videos are Scarlett’s memories, although the reality of this premise is stretched a little as she's not directly involved in some. 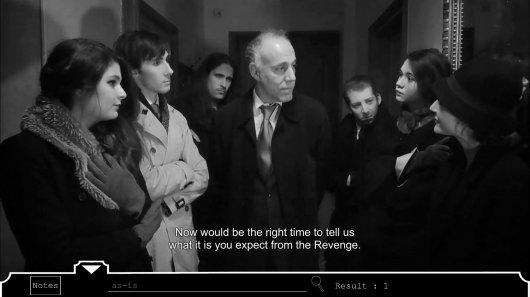 Videos run full-screen and you need to pay attention to what characters are discussing in order to learn new keywords. All videos play in French, but whether you are a native speaker or not you will likely want to enable subtitles – either French or English – through the game options. This will help with discerning the proper spelling of important words and names. However, the subtitles only display while the videos are playing. If you pause a video in order to write something down, the subtitles vanish, reappearing only when you resume the paused clip. Some characters speak their lines very quickly, and I found I had to watch some memories multiple times in order to get the correct spellings of certain names. Such videos are few and far between, at least, and can at least be canceled out of once you have the name you need, rather than watching them in their entirety again.

FMV games live and die by their video quality. Unfortunately, How to shoot a criminal does not fare well here, providing a very static playing experience. Characters are usually seated around a table or left standing in front of nondescript backgrounds that do nothing to suggest that the events are taking place in a newspaper office of any sort. The biggest action scenes consist of actors walking into or out of these permanently framed shots. The stark visual contrast of the interface fails to carry over into the film clips, as all scenes are evenly lit instead of taking advantage of the black and white medium to have areas of deep shadow and bright light to direct the eye. All told, the technical presentation of the videos is quite dull.

Creatively they are little better. Scarlett’s memories get the job done of putting across the rather clichéd plot – a story of a journalist willing to go to any lengths to expose injustices that the authorities seem unable or unwilling to deal with – but not much more. The Revenge is staffed by eight people who all make a number of appearances throughout the different videos. The actors perform their roles serviceably, with no cringe-inducing performances but no standout ones either. All the characters are rather restrained, which can sometimes be at odds with the weighty subjects they’re discussing. 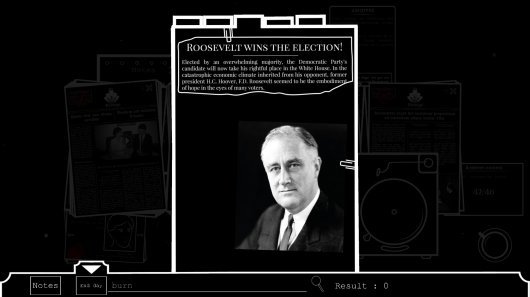 More jarring are some of the artificial limitations the game imposes. You are allowed to have any number of documents on your desktop at one time – towards the end of the game I had all 83 documents up as it was easier to leave them all visible and continue to search rather than closing them one-by-one. Accumulating so many does not pose a problem, as they are placed into four stacks across the screen and any given document can be dragged elsewhere if so desired. As well, red checkmarks appear on those documents that have already been viewed so it is easy to tell when a new one has been retrieved and needs to be more closely interacted with. Strangely, however, you are only allowed to retrieve four documents with any given search. If more than four contain the typed keywords, any additional documents are not shown. Instead, the interface displays a message indicating how many additional documents there are that you have been denied.

The other significant limitation stems from the four day structure. Each day more documents become available for you to find. Many of the new ones are found by searching again with the same keywords used on the previous days. This means it’s best to keep a list of your successful and unsuccessful keywords as they may return new results later on. A notebook is provided in-game that can be used to record keywords, but I found its implementation to be too glitchy to be helpful. Information I typed would not display after I had filled a single notebook page unless I artificially hit enter several times, and words I had entered would spill out of the notebook while scrolling. I very quickly turned to writing down keywords and notes with a real pencil and paper.

In addition to hindering gameplay, the four day structure also has an impact on the narrative. The Her Story-style search nature of the game means that it should be possible to experience the story in a non-linear way, but each day requires finding certain key documents before time is allowed to progress. In this way, the seeming non-linearity becomes linearized as important information can only be discovered on specific days. The result is a relatively linear but fragmented story instead of a non-linear investigative experience. 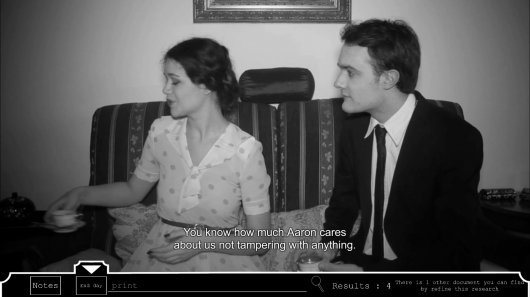 The majority of searchable documents are newspaper pieces that change into videos unrelated to the articles themselves, but as the game progresses different types of documents begin to appear. These include records that can be played on a phonograph and actual text documents that can be read, rather than viewed as videos. These different types of documentation add some much-needed variety and fit the game world much better than the video-triggering documents. I found myself wishing for even more variations like these. The records in particular are interesting, as they present crackly interviews that seem much more tied to the story than the majority of videos.

Other than background noises in the video clips, sound effects are minimal but serve their function well. While on the desktop a faint echoing wind blows in the background, documents make a satisfying swoosh when they slide into and out of frame, and radio messages and phonograph recordings are all treated to sound period-appropriate. These audio effects are subtle, tastefully done, and don’t distract from the searches that need to be conducted. 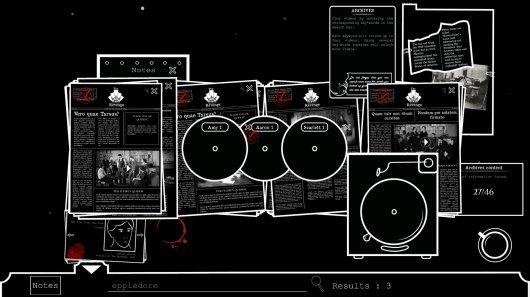 Once you have accumulated all 83 documents the game has to offer, you will then know enough to be able to discredit Williams. Then you can choose one of two news stories The Revenge already published to expose to the public how your boss manipulated the chosen story. Having made your choice, you are presented with a video showing the aftermath of that decision, resulting in two different though similarly presented endings. In either case, you are given access to several final documents that reveal videos unrelated to Scarlett’s memories but which detail the narrative denouement even further. It is made very clear when you’re about to make this final choice, giving you the opportunity to save the game in order to see how the other ending plays out. However, due to the fractured nature of the story, both endings feel a little underwhelming and disconnected from the rest of your investigation rather than something that has been built towards over the course of four hours of play time.

How to shoot a criminal is a game that feels like it should be more than it is. The striking style of the desktop is let down by the affixed, evenly-lit videos. The four day structure forces what would otherwise be a non-linear investigative experience driven by player agency – ideal for a 1930s reporter – into a very linear experience of a rather clichéd story. Even the arbitrary limitations of the interface are at odds with the immersiveness that delving into old newspaper articles, phonograph recordings, radio programs, and assorted other documents should provide. There are enough tiny kernels of goodness here to warrant watching for the development team’s works in the future, but this trip to the past is best forgotten save by those who love Googling random information in real life.

Other than the mildly non-linear, Her Story-style keyword investigation, How to shoot a criminal’s dull story and boring videos don’t leave much else to see in this FMV mystery game.

GAME INFO How to shoot a criminal is an adventure game by Pandorica released in 2017 for PC. It has a Live Action style, presented in Full motion video and is played in a First-Person perspective.

What our readers think of How to shoot a criminal 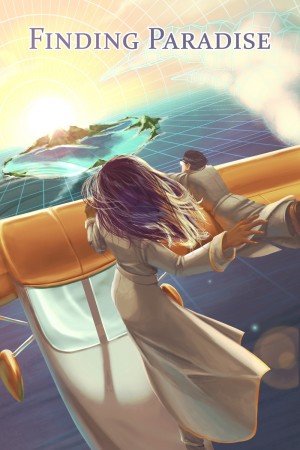