Horror and suspense are hard feelings to evoke. As a general rule, I am more open than most to allowing myself to be scared, suspending my disbelief and letting myself give in to a good fright. In other words, I enjoy spending time on the edge of my seat. But while Kowai Sugoi’s first-person horror adventure Shiver deserves points for trying to set an appropriate mood before plunging players into its creature feature, it simply is too rushed an experience to really accomplish either goal.

During a late-night drive through the snow-choked Canadian wilderness of British Columbia, the game’s protagonist is blindsided by a shadowy form suddenly appearing on the road ahead of him. Running his car off the road, he totals it in the crash but manages to walk away in one piece. Examining his surroundings, he finds that he has gotten himself stranded right at the entrance to the Windy Oaks National Park. Since freezing to death is the only other alternative, the objective becomes finding a way to signal somebody for help. The nearby ranger station is locked up tight, as is the system of old underground mining tunnels that house a deadly secret.

Right off the bat, Shiver seems to have several things going for it. Being stranded in a nocturnal forest, snow flurries drifting past your face with the few vestiges of civilization locked and barred around you, sets up a nice, moody atmosphere for a horror game. Even after finding a way to enter the abandoned station, notes left by the staff to communicate with each other (not to mention the occasional spooky sound) leave you with an uneasy feeling that something is just not quite right. Normally I’d applaud a nice, slow-paced opening like this for taking its time to build suspense, but in this case, the 15-20 minute first act sadly takes up nearly half of the game’s runtime, making what comes after all the less effective. 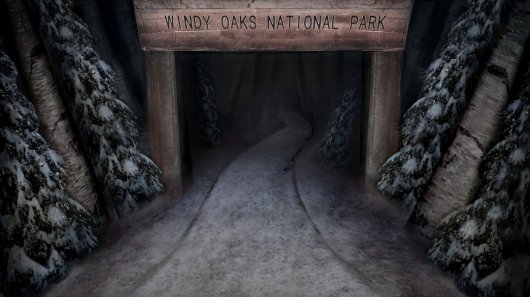 The basic gameplay is fairly straightforward where first-person slideshow-style adventures are concerned. You’ll gather items from a handful of locations and use them in other areas to solve puzzles. In Shiver, the majority of obstacles are concerned with finding methods of getting past locked doors, the ultimate goal being the radio locked away in the back of the ranger station to call for help. There is a fairly low threshold of difficulty here, and most players probably won’t have much trouble deciphering the item-based puzzles. Inventory objects are used in the environment or on each other in the inventory bar, and the smart cursor helps guide you when hovering over interactive hotspots.

After what I would describe as an effective first act of quiet desolation and suspenseful build-up, Shiver seems to realize that it’s already approaching its own finale at a breakneck pace. With a total length of about 45 minutes, the second act cheapens the experience by resorting to jump scares to frighten players. While it admittedly did get me to jump on one occasion, the game simply didn’t properly set up what I was supposed to be afraid of. Though there are a few notes and such lying around, it was really just a case of, “Oh, now there’s a creature here.” With such extreme brevity and low challenge, this is clearly not a game aimed at the hardcore adventure gaming crowd, but even casual gamers will likely not find much here to satisfy.

Ultimately, I think the most effective sense of horror in the latter stages came from me rather than from elements in the game. It was thinking of other games and movies with similar settings I’d played and watched which informed what I should be afraid of in Shiver. I simply can’t award much credit here when the most frightening thing the game did was remind me of more intense experiences I’ve had with other similar stories. 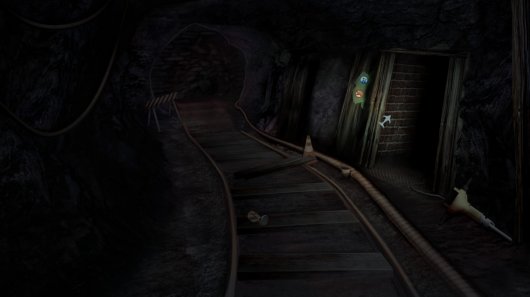 It doesn’t help that the graphical assets are a little ho-hum; passable, certainly, but failing to stand out in any meaningful way, with slightly smudgy environmental elements clumsily dropped into more photo-realistic backgrounds, creating an overall aesthetic that lacks cohesion. The few nice touches with lighting, or in one case with tracks appearing behind you in the freshly fallen snow – are those yours or is something following you? – are weakened by the awkward use of a static cut-and-paste clip-art monster figure in the closing moment, a cheap scare with a comically ridiculous creature at the worst possible time, ensuring this will be your lasting memory of the game.

There isn’t much music, save for some quick snippets at the very beginning and end, as well as the closing credits. However, I’d argue this to be a positive, since in place of music the focus is on sound effects of both the mundane and otherworldly kind. Wind howling past the walls and windows of the deserted ranger station is as eerie as the occasional tittering heard off in the distance while traversing dark underground mine shafts. There is even one character who receives (offscreen) voice acting, if only for a couple of lines.

When all is said and done (which happens all too soon), Shiver isn’t so much a bad game as simply not enough of one. It does a decent job using its setting and especially its sound design to build up a nice atmosphere that doesn’t rush things along at first. Sadly, the hurried second half exposes what lies beneath: a bare-bones story with little payoff, straightforward puzzles, and even less effort put into the antagonist, all rolled up in an experience that clocks in at well under an hour overall. As the "spiritual successor" to the 2016 freeware game Cozy, this is definitely a step in the right direction but remains squarely in the realm of short, low-budget indie endeavors that can’t measure up to the quality of most of its commercial contemporaries. With a price tag attached, even a minimal one like this, it is difficult to recommend this title to even the most open-minded of horror fans.

At under an hour, Shiver is a budget horror title through and through, but even by casual standards it is bound to disappoint. While the suspenseful early build-up shows some promise, it soon becomes apparent that there was never much behind the misleading facade.

GAME INFO Shiver is an adventure game by Kowai Sugoi Studios released in 2017 for Mac, PC and Linux. It has a Illustrated realism style, presented in Slideshow and is played in a First-Person perspective.