I’m a big fan of Supermassive’s Until Dawn. The relative lack of player agency, outside of scripted choices, didn’t bother me one bit when the subject matter was so enjoyable. The schlocky, slasher-movie popcorn flick vibe was perfect to experience with a group of friends gathered around the TV screen, and scratched a deep-seated horror itch I barely knew I had. Two years later, Hidden Agenda strikes a somewhat different tone but fits into the same “Choose Your Party Adventure” mold as its spiritual predecessor, with predictably similar results. Though it has limited staying power, it's a very well-constructed crime thriller with triple-A production values, yet at a surprisingly budget price.

A PlayStation 4 exclusive, Hidden Agenda is part of Sony’s PlayLink line-up of co-op-centric games best played with a group of friends, though it can be experienced alone. It has the distinction of being a console game that is entirely controlled via an app on each player’s mobile device. The app handles everything from making choices in the branching narrative, participating in the game’s Quick Time and item search mini-game sequences, and providing a dossier of all relevant characters and important choices at each player’s fingertips without interrupting gameplay.

Much like in Until Dawn, the unfolding narrative of Hidden Agenda sees control passing between multiple protagonists. Players alternately direct Becky Marney and Felicity Graves, one a homicide detective who made a name for herself five years earlier by bringing in the menacing serial killer known as The Trapper, the other the district attorney instrumental in prosecuting him at that time. Now, just days before The Trapper’s scheduled execution, the two return to the hunt when a new lead suddenly suggests the true Trapper may still be out there. 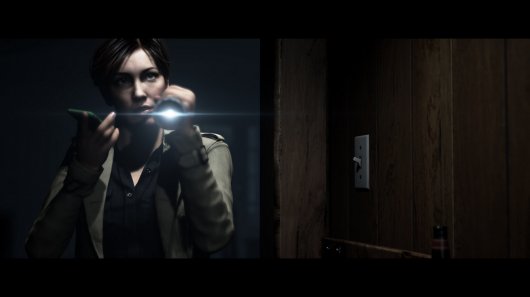 Hidden Agenda creates a much more serious tone than Until Dawn did, despite that game’s gleeful over-the-top violence and gore. Rather than a B-slasher movie, here players get to live out a dark and gritty police procedural. The rabbit hole goes deep down, touching on mature topics like child abuse, prostitution, domestic violence and, of course, physical and mental torture inflicted by a deranged psychopath upon his victims. But there is also the more mundane side of police investigation and courtroom proceedings that rate rather low in terms of excitement during repeat playthroughs.

The moment-to-moment gameplay offers very little incentive to return to Hidden Agenda more than once, but no one familiar with Supermassive really expected it to. Like the developer’s previous offering, this game is essentially one long 2-3 hour movie, with occasional taps and swipes on your phone screen to steer it in the desired direction. There are essentially two main types of interaction: moving an on-screen cursor to select a desired response during conversation and key decision moments, and moving the cursor to highlight objects in the environment, either to trigger some sort of cinematic interaction (such as avoiding a toppling shelf while in pursuit of a suspect through an abandoned building), or to discover clues during investigation sections that work like a scavenger hunt, with the game showing three objects in silhouette and asking players to locate them in the environment.

Instead, it’s the ability to play the entire story from beginning to end with friends, either co-operatively or with each player fending for him- or herself, that will pull players back until all secrets have been revealed. It’s a case of the more the merrier, with each player, up to a total of six, controlling an additional (uniquely colored) on-screen cursor. This leads to unpredictable situations on and off the screen as decisions are reached by majority consensus. Sometimes all players are required to agree unanimously, leading to no small amount of persuasion, cajoling, and good-natured threats amongst friends. One person is put in charge from time to time, when players may vote who among them best embodies a certain trait. 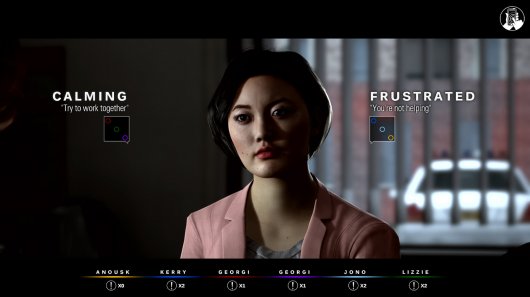 For those who prefer conflict over co-operation, Hidden Agenda also has an optional competitive mode to experience. The actual game remains the same, and decisions are still made by majority vote. But in this mode, each player can earn “Takeover” cards that can be played from their own screen, which gives them control over a particular vote, locking out all other players… unless one of them also has a Takeover card and uses it to wrest control right back. In both competitive and co-op mode, scenes relying on reflex actions like Quick Time Events and timed object searches reward the fastest player with an additional Takeover card.

To give players a reason to backstab each other and be conniving in competitive mode, one individual in the group is given, via their phone screen, a “Hidden Agenda” from time to time, such as manipulating or downright hijacking an upcoming vote to produce a specific outcome. The others must then sniff out the traitor in the group, and will cast a vote to expose them. Points are awarded for successfully pulling off a Hidden Agenda, as well as correctly guessing which player is currently following one. These are simply for bragging rights about who takes first place by the end, but it’s a neat idea for a meta-game, a way to win or lose independent of the in-game criminal investigation. Unfortunately, while this is a really unique idea with a lot of interesting potential, it often doesn’t feel like much more than a gimmick here. It doesn’t have any influence on the flow of the game – outside of branching down a specific narrative path – and Takeovers are effectively only useful if no other player also has one to undo your coup.

How you approach the game can have a big impact on how much you enjoy the story it attempts to tell. Playing with friends, particularly in competitive mode, pulls your attention away from the plot on a constant basis, not to mention the unpredictability of group votes. This is really how Hidden Agenda  is meant to be experienced, but there is good cause for going back to the game after the party guests have all left and running through the story in single-player mode. In my case, there were entire scenes and characters I discovered that we had missed as a group, and I got to delve into the actual investigation in a way that’s just not possible with others present, by forging my own path and slowing down to think and digest information at my leisure. Different endings allow for the investigation to end in a variety of ways, ranging from the successful identification and capture of the killer to alerting The Trapper to your investigation and becoming the killer’s next victim yourself. 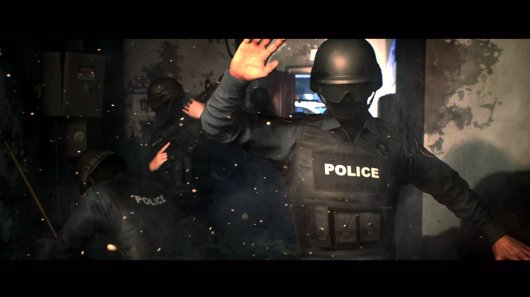 It should come as no surprise to anyone who played Until Dawn that Supermassive has once again created some amazing 3D visuals. The incredibly detailed facial animations are back in full effect, and it’s pretty impressive how close the artists have come to skirting the uncanny valley, with just a small handful of moments where an awkward expression made it into the game. Some characters, like Judge Vanstone, whom players meet early on, look astonishingly lifelike, while others work to a slightly lesser degree. Environments, too, are shown in lifelike detail, though there is no true freedom to explore as you see fit. Hidden Agenda is a dark story set in dark places, but the photo-realistic way the rain-soaked alleys and dilapidated buildings of this ultra-urban inner city setting are depicted makes even the dingiest of environments a pleasure to look at. When entering a darkened cabin towards the halfway point of the game, dust motes dance in the light cast through the door. It’s moments like these when the game is almost indistinguishable from a live-action movie, and rivals some of the best graphics seen in games, period.

The same can be said for the cast of actors and actresses who bring the characters to life. While it isn’t a roster graced with easily recognizable names, it’s hard to pick a weak performance from what’s on offer. Equally cinematic is the soundtrack, which does a great job underscoring tense moments of suspense, and grows to a rousing accompaniment during more action-heavy sections. There is no theme that overtly catches the ear, and you may often not notice the music if you’re caught up in the story, but as ambient atmospheric background it’s always a good fit with what’s happening on-screen.

Though the nature of the story in Hidden Agenda is a bit different from Until Dawn’s, the two games share so much in common in terms of player experience that their audiences will have a great deal of overlap. If the lack of control in what’s essentially an interactive movie bothered you in the previous game, then this one won’t do much to change your mind. In fact, by moving into something more narratively realistic, if no less dark, this game has lost some of that down-and-dirty fun factor of seeing annoying teenagers get their comeuppance. Replay value is also somewhat affected by this, and the PlayLink mechanic seems like mainly a gimmick, albeit a clever one that’s not without merit if it can be built upon in the future. But for those willing to embrace the game for what it is rather than what it isn’t, particularly if you have friends over to share in the experience, there is plenty of enjoyment to be had here. With its slick presentation and budget price point, it’s hard not to recommend Hidden Agenda for anyone who places stock in story first and foremost.

Hidden Agenda is available at:

Hidden Agenda’s PlayLink functionality isn’t the “next big evolution” in narrative game design, but for those who enjoy a good, gritty thriller, the story told here makes for a great night in with a group of friends, with enough left over for some single player follow-up.

GAME INFO Hidden Agenda is an adventure game by Supermassive Games released in 20172017 for PlayStation 4. It has a Illustrated realism style, presented in Realtime 3D and is played in a Third-Person perspective.

What our readers think of Hidden Agenda