More than anything else, E3 2017 convinced me that it was time to make the leap to VR. This was solely attributable to one game, which I stopped to try out on a whim on the final day of the show as I was about to make my way home. That game was Moss. Several months later, the time has finally came to put the finished product through its paces on PlayStation VR, and while I wouldn’t call Moss an adventurer’s dream come true in terms of storytelling, and it certainly includes more action elements than traditional genre fare, it’s got a thoroughly endearing protagonist and excels at placing the player into the midst of the adventure, impressive feats not every virtual reality game can claim.

Moss begins in a cavernous gothic library wing, of a size more akin to a train station terminal or something one might find at Hogwarts. In front of you, on a little pedestal, a book is prominently featured bearing the title “Moss” inlaid in golden lettering. As you arc the controller to flip open the book’s cover, the narrator begins a tale of the eponymous magical kingdom, and of the dark events that happened many years ago during the Cinder Night. The forces of good and evil clashed, both vying for a fabled and powerful glass relic, which was lost in the battle and disappeared deep in the forest, until one day its next bearer stumbled upon it, an unsuspecting little mouse named Quill.

It’s hard not to fall immediately in love with Quill. This little cute-as-a-button mouse is one of the tiniest inhabitants of the forest, and finding the relic – even though she has no idea of its importance yet – thrusts her into the adventure of her lifetime, against forces larger, meaner, and uglier than her. This is where the player comes in. To make it through her quest, Quill is in need of some serious help. You don’t just use the controller to guide Quill across obstacles and through combat, you are actually sucked into the storybook itself and take on the role of “the Reader” for the remainder of the game. The Reader is an omnipresent spiritual being, chosen by the relic and bound to Quill, present in each scene and able to manipulate certain objects in the environment to lend a direct helping hand. 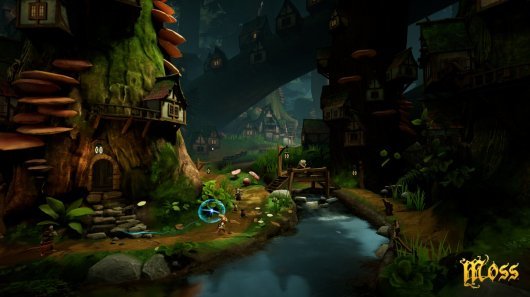 As the Reader, using the controller’s light bar to move a floating orb of luminescence – your on-screen cursor – players can push or pull some objects too big for Quill. Latching onto heavy gates that bar the way forward, or stone pillars that double as jumping platforms, then swiping the controller through space to simulate movement is your role in this partnership. There are a multitude of other objects, useful or just for fun, which can be fiddled with, like clay pots, torches, and even heavy duty ballistae. Interacting with Quill when she is hurt also heals her, appealing to your protective nature toward your tiny, furry friend. Quill can also be petted affectionately by running the orb over her fur, and many players will likely melt from cuteness overload the first time she stretches her tiny paw skyward towards you for a high five after a particularly bothersome puzzle has been bested.

These puzzles are at the heart of the Moss experience, with combat being a distant, albeit important, second. Each individual scene in the game is a standalone set piece of switches, buttons, and movable parts that hold the secret to progressing beyond. This further supports the game’s storybook presentation; the sound of a page turning can be heard as the screen fades to black when moving from one area to the next. As the Reader, you automatically travel to each new scene, awaiting Quill’s entrance and helping her make her way to the exit, usually from left to right.

As the two of you pass through overgrown forest trails, murky swamps, castle ruins, and even Quill’s enchanting mouse village, it is up to you to figure out how to get her from one destination to the next. Advancing takes a blend of puzzle-solving, light platforming skills, and reigning victorious in battle. Some dexterity is also required to fulfill the Reader’s actions while simultaneously maneuvering Quill through danger. All of this is accomplished via the PS4 controller, with light bar and shoulder buttons assigned to your actions, and thumbstick and face buttons controlling Quill. The puzzles themselves are usually not incredibly challenging, and at certain moments Quill will even call up to you with some extra assistance, chittering and miming the solution to the task at hand. 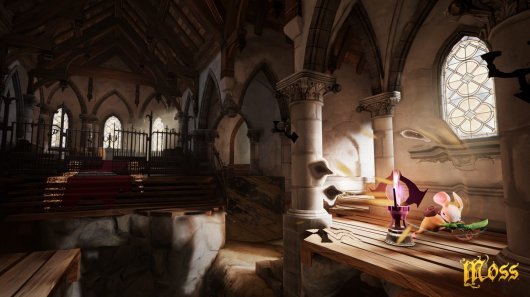 From time to time, inescapable combat sections also pop up. These are usually intertwined in some way with the puzzles, such as needing to defeat waves of attackers in a certain manner to extinguish a magical barrier. Other times, enemies themselves may be needed to open the way forward, like using an opponent able to shoot projectiles by latching onto it and causing it to hit an out-of-the-way switch. Most players will likely find these action scenes more difficult than the puzzles, especially since Quill goes down after only a small handful of hits, and finding a few quiet moments of safety to envelop Quill in your healing orb can be difficult in the midst of a skirmish. Thankfully, the game is very forgiving of failure, immediately respawning Quill back at the screen’s entrance while leaving puzzle progress intact (this applies to instant platforming deaths as well). Moss is ultimately capped off with a boss fight that makes good use of the game’s systems, though it focuses on platforming and on-the-fly problem-solving rather than combat proficiency.

With this mix of gameplay styles comes the question, “Is it any fun?” The answer is an unequivocal yes. The challenge level is low enough that progression is almost constant, leading to a total play time of around 3-4 hours, much of that spent exploring the 3D environments. Instead of just speeding through, you’re encouraged to take your time and be thorough, as the mouse-sized tunnels and passages Quill must traverse all but beg to be examined from a better perspective. Each screen in Moss hides a secret scroll as well, and finding all of them gives the game a little more longevity, though puzzles and dialog-heavy narrative scenes cannot be skipped even the second time around.

I found playing in a standing position to be best, as players are given enough freedom to roam a few real-life feet around the current scene, which is where the VR element really comes into its own. The feeling is one of standing in front of a large-scale doll house, watching an adventure unfold before you, and being all but invited to move in for a closer look around. Quill is beautifully animated and expressive, and it’s a joy to savor the details of her and her world. Want to see how the inner workings of a puzzle mechanism work? Simply bend down and lean in to get an up-close view. Searching for a well-hidden scroll? Get on the floor and crawl around peeking into earthen tunnels, then stand on your tippy toes to check even the highest hiding spaces. Full 360-degree movement and space to maneuver in each scene means that you are investigating the environment as much as Quill is. Simply put, while wearing the VR helmet, you aren’t just looking into the world of Moss through a window, you’re an actual character in it. 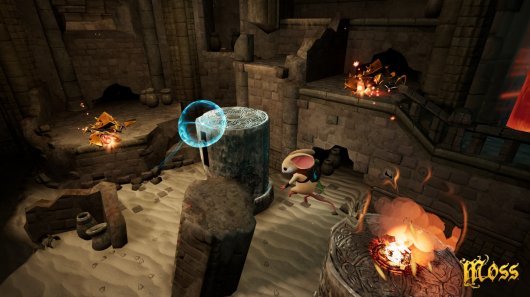 Unfortunately, praise for the magical world created here stops a little short of its evident potential. The narrative itself is fairly uninteresting and read out by the book’s narrator in such a convoluted manner that I almost immediately tuned out as soon as it began and had little-to-no clue of the backstory even on my second and third attempt at listening to it. For all intents and purposes, Moss is a standard “rescue your family member from the bad guy” tale, one without even much of a payoff, as the game ends as more of an introductory chapter, with the real adventure still to come.

The good news is that what it lacks in story, Moss more than makes up with the enjoyable time spent in its gorgeous landscapes. The visuals on display at times made me marvel, and I sometimes had to leave Quill waiting a few moments when entering a new scene as I desperately wanted to examine every nook and cranny for my own amusement. There is an interesting history hinted at in the random objects Quill passes by on her journey. Left-behind human-sized battle axes and medieval war helmets, spears and swords protruding from the swampy water show us that Quill is just a tiny mouse in a much larger world of untold stories still waiting to be revealed. 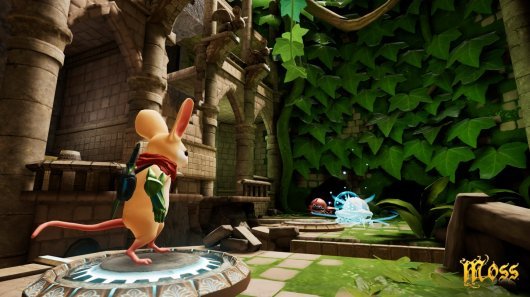 The sound design serves to further deepen immersion into Moss. The storybook segments – the only time characters have actual dialog – are all performed by the narrator adopting different voices for each one, like an actual storyteller. Quill’s squeaks and intrepid nature are, of course, adorable. The various noises of nature are woven together into an impressive blanket of sound, and it really feels like being there: frogs croaking, insects buzzing, birds hooting in the distance, leaves and plants whispering in the wind. But even when away from nature's orchestral ambience, serene musical compositions foster a sense of discovery, until replaced by something more threatening when steel must be bared.

The charming storybook presentation and cute character designs can easily be mistaken for being aimed at the youngster crowd, but Moss is the kind of game that will be enjoyed by anybody young at heart. It presents us with an intriguing new world whose full story we’ve only begun to uncover, and a lovable new character alongside which to explore it. But beyond being a whimsical game with an endearing heroine, the sense of immersion created by the vivid visuals, sound design, and great use of VR really seal the deal in pulling the player in. Narrative depth unfortunately takes a back seat to combat and some light platforming to break up the puzzling, but these are a price of admission worth paying to accompany Quill on her adventure. For a charming, albeit short, stint in a magical fairy tale world, you may just find, like I did, that Moss is reason enough to take the VR plunge.

Though more action-oriented than adventure gamers might be used to, Moss is that rare game that delivers exactly what it promised, delivering a lovely bonding experience with an adorable companion while solving puzzles and having a great time exploring a magical fairy tale kingdom.

GAME INFO Moss is an adventure game by Polyarc released in 2018 for Oculus Rift, Oculus Quest, PlayStation VR and HTC Vive. It has a Illustrated realism style, presented in Realtime 3D and is played in a First-Person perspective. You can download Moss from: We get a small commission from any game you buy through these links.
The Good:
The Bad:
The Good:
The Bad:

What our readers think of Moss