Odysseus Kosmos and his Robot Quest: Episode One review

Odysseus Kosmos and his Robot Quest: Episode One  (2017)

Haunting music plays as the San Francisco, a 457G class ship, gently moves through the pixel-drawn Gargan system in deep space, stars twinkling in the background with a giant black hole in close proximity. Inside the large dark spacecraft is Odysseus Kosmos, a lazy, corner-cutting engineer with an unhealthy obsession with donuts, who has been left all alone by his crewmates with the sole task of keeping the vessel operating. Oh, and there’s the oddly named robot companion, Barton Quest, to keep him both sane and on-task.

As you start Odysseus Kosmos and his Robot Quest, this is pretty much all you know, and unfortunately you won’t have much more information at the end of the couple of hours it should take you to finish the first chapter. To be fair, this is intended to be a serialized game with five chapters in total, so it’s to be expected that the story and characters will be developed in greater detail as the series progresses.

Odysseus, Oddy for short, is the engineer on the San Francisco and his only task is to maintain the ship while the rest of the crew are off on a mission. That mission, you discover soon enough, is on a planet that is near the black hole you’re orbiting and is experiencing major time dilations. In short, what is mere minutes for the crew could turn out to be longer than Oddy’s natural life span. 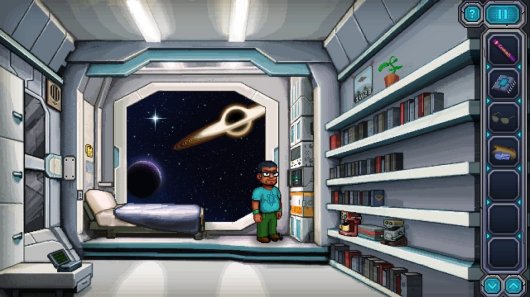 Oddy isn’t what you would expect from an engineer. He’s capable, but unmotivated. His sole focus seems to be eating, and when he is called on to repair something, he might not bother to fix it properly, instead doing just enough for the moment and hoping that it will hold up in the future. He also has a marked capacity for misplacing things that he just might need to solve the next puzzle.

His frustrated robot friend Barton Quest is the voice of reason on the ship. He’s the one who advises Oddy what needs to be fixed and offers advice at times. This is a character that could have simply been inserted as someone for the protagonist to talk to, but instead actually serves a practical purpose as well, such as one puzzle in which Barton helps Oddy to fix a broken circuit. If you’re a Sierra fan from years gone by, think Cedric the Owl in King’s Quest V, except useful.

Everything you learn comes from either introspection on the part of Odysseus, or from the interaction between the two characters. This is where the first major disappointment of the game lies: the dialog is tedious. 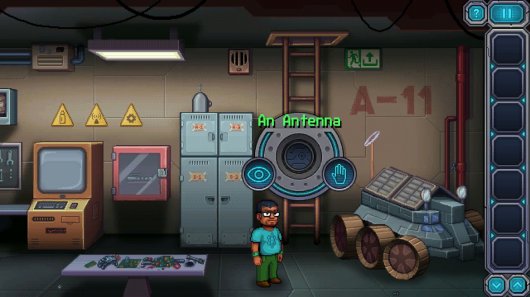 While the events that occur while Oddy is alone on the ship do create a desire to know more of the backstory, when a conversation starts you really want to stop reading. The banter between Oddy and Barton is over-written and misses the mark in its comedy and timing, something that might have been fixed (or at least lessened) with real voice work. There’s a gem of a good idea within all the dialog: the dynamic of their relationship – Barton being frustrated at Oddy’s laziness and Oddy not caring – is good, but it’s hard to stay interested when the majority of the conversations are so repetitive. A great example of this is during the introduction, where the entire discussion revolves around donuts and Oddy’s love for them. While it’s a nice little character quirk, it’s not interesting enough for the amount of time devoted to it. Another issue with the text is the grammar. “To” and “too” mean different things and apostrophes are important. They’re little things, but issues that could have been improved with proper editing.

Puzzles so far are largely of the fairly standard fetch-and-use type. The main task in this debut installment is to repair what seems to be an endless stream of mechanical problems, made worse by the strange gravitational forces of the black hole just outside. Fixing something might be as simple as getting a component from the ship supplies and placing it in a machine, or gathering a number of items to restore your broken clock radio. While most of these obstacles are reasonably logical, there are some strange combinations that only old-school adventure game fans would appreciate, like using a rubber duck, back scratcher, or a mouse (the animal, not the computer accessory) to resolve a dilemma.

One of the interfaces you’ll be interacting with a lot is your onboard computer terminal’s SanFran.net. Logging in brings up a classic retro display, all black and green, which tells you what your current task is (usually repairing something that’s broken). There are a few of these terminals throughout the ship and they serve both as a plot device and a convenient quest log. One very early quest involves getting your misplaced screwdriver from on top of an intercom speaker, and doing so actually involves using SanFran.net in a very tangible way. 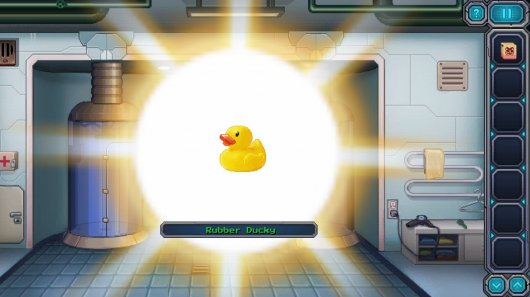 There are also a number of close-up puzzles in the game that add variety to the mix. These usually represent the climax of repairing a particular ship system and might involve fixing a broken wire or assembling pieces in a Tetris-style puzzle. None are very complicated but they do provide a small challenge while progressing the story.

Of the increasing number of adventure games – especially those of a sci-fi persuasion – that go with retro pixel graphics, Odysseus Kosmos stands above many of them. The spaceship is generally portrayed in off-white or metal shades, but the artists have given it a distinct lived-in look. In the engineering section, the first main area encountered, there’s a lot of colour livening up the screen, with plants growing and some scientific equipment that also forms the first set of puzzles to solve. One area of notable impact is the recreation room, which has an exposed back wall showing the black hole and space screen in all its glory. Among the sofas, armchairs and foosball table is a whiteboard with a drawing that looks suspiciously like a certain rabbit from classic LucasArts. 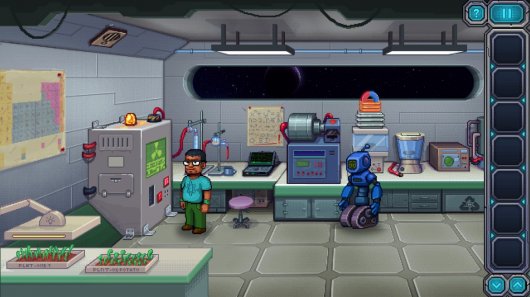 While the backgrounds stand out in the art department, the animations are a bit of a letdown. Oddy himself doesn’t have an up or down cycle, instead standing left or right at a slight downward angle. This doesn’t present a major problem since none of the rooms are too deep, but on those occasions when he does walk forwards or backwards, it becomes quite noticeable. There’s also a lack of specific animations. In the recreation room there’s a puzzle where you are required to stand on Barton’s shoulders, but there’s no animation of Oddy climbing up, the game just fading to black and resuming with Oddy on top.

A magnificent song is performed over the opening montage, which really sets a melancholy and lonely feeling for the adventure and is a definite musical highlight. Each room has its own track playing in the background – nothing unexpected from a sci-fi game and none of them overbearing or detracting from the experience. In the close-up puzzles the score has a distinctly nervous feel, which sets you on edge a little and gives the event more impact. It doesn’t appear that any of the tasks can actually be failed, but it is certainly a nice way of adding some tension to a game that otherwise has very little.

Both characters are voiced in what would best be called Simlish. It’s garbled nonsense, completely unintelligible, but does give the effect of the two of them speaking. Made popular in The Sims games, it’s not used in adventures often and its effectiveness in this game is really going to be a matter of personal opinion. You’ll either like it or loathe it. Personally, I don’t mind it and the recording quality is good, although I did have to check my language settings to make sure I hadn’t turned on a different voice pack! 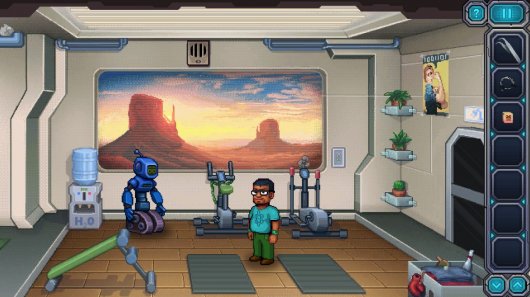 If you’re looking for a game with a modern point-and-click interface, Odysseus Kosmos will suit you perfectly. There’s nothing revolutionary about it, but it’s clean, efficient and gets the job done. You’ll only need your left mouse button to walk or interact with an action-wheel that appears when a hotspot is clicked on, with the usual “look” or “use” options available. Inventory items are displayed down the right side of the screen and after you select one you simply click it on the object you wish to use it with. Inventory can be examined or combined as well. Pressing the space bar brings up all the available hotspots, which is always a nice addition.

Another thing I appreciate in a game is a built-in hint system. Let’s be honest, in 2018 it’s very easy to just look up a walkthrough for a game on the internet, but having in-game help is far more accessible. What makes a good system is when the hint is really just a hint and not the entire solution to a puzzle. Odysseus Kosmos achieves this with well-crafted clues that don’t give everything away. On occasion it does make it plainly obvious what to do next, though, like the first clue of the game: “Perhaps I should ask for advice in the game’s Facebook group? I do have a button in the Main Menu for that, after all!”

Based on the first chapter, Odysseus Kosmos and his Robot Quest is graphically quite pleasing and contains enough story ideas to want to continue and see how they play out. However, as is the nature of episodic games, it’s hard to know whether the faults will be improved as the series progresses or will prove to be symptomatic of the entire experience. If you enjoy the retro pixel art look and science fiction with a serious plot but also some humour, this will be worth checking out. With a targeted four-month schedule between chapters and the second installment already released as I write this, it might not take too long to see how it all works out.

The short introductory chapter of Odysseus Kosmos and his Robot Quest features beautiful retro-style art and sets up what has the potential to be an interesting sci-fi story, though with plenty of room in its writing and animation to improve in those areas.

GAME INFO Odysseus Kosmos and his Robot Quest: Episode One is an adventure game by Pavel Kostin released in 2017 for PC and Switch. It has a Stylized art style, presented in 2D or 2.5D and is played in a Third-Person perspective.

What our readers think of Odysseus Kosmos and his Robot Quest: Episode One