Review for The Search

Children are fascinating beings. You just have to watch them for any length of time to realize their creativity is completely unfettered. However, somewhere along the journey to adulthood people tend to lose their imagination. It becomes harder and harder to listen to that little voice of inspiration inside. Jason Godbey’s first-person slideshow-style adventure The Search is a short but fairly sweet game that gives you permission – nay, encouragement – to listen to that voice once more, though ironically it sometimes does so in an overly explanatory manner. If you let it.

The Search is a curious game in that it provides two different ways to experience it based on the dialog settings you choose for it. By default, both voice and subtitles are enabled. However, you can disable both of them at the same time. “Why would you want to?” I hear you ask. Well, I’ll tell you.

This is a game with a strong message at its core about the importance of creativity in one’s life. If you play with the voice-over turned on, then you are assuming the role of a nameless, faceless woman who has been working as a professional artist and now finds herself stranded in a vast, black emptiness. A handful of wooden platforms connected by narrow bridges are illuminated by street lamps; beyond that is nothing but a void. A cryptic note signed by “The Invisible” informs you that a series of clues have been left to lead you out of this wasteland. The note is read aloud by your character, who then goes on, at some length, to provide her interpretation. This forms a recurring pattern throughout the game as you uncover more notes and perform certain actions. The protagonist, who is quite well read and frequently references Carl Jung, Joseph Campbell, Greek and Roman mythology and literature, as well as assorted proverbs, continues to explain everything she encounters, leaving very little for you as the player to interpret for yourself. 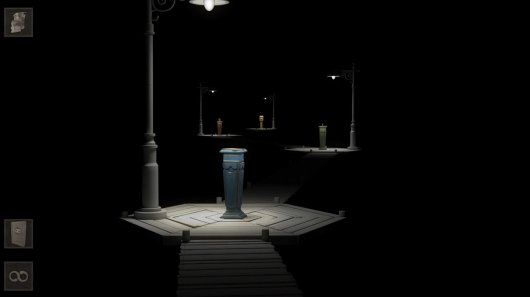 If, on the other hand, you choose to play The Search with the voice and subtitles turned off, it becomes a very different, much more introspective experience, even though you still progress through all the same locations and challenges. Here you, the player, are free to interpret the meanings of the messages left by The Invisible for yourself. If you really want to, you can still learn what your frustrated artist alter ego thinks of things by reading the in-game journal, accessed through a button tucked to one side of the screen. This journal contains a transcript of what the woman would be saying if you could hear her, but it too is completely optional as to whether you choose to read it or not. Nothing she has to say is important to solving the game’s challenges so you don’t have to worry about missing some vital clue if you decide not to follow her running commentary.

The difference in the way you can experience The Search can best be summed up by considering a painting. If you like to be told what a painting means to others, you will likely get more from this game with the voice turned on. If you like to reflect on what a painting means to you personally, then it will be more rewarding to play with the voice and subtitles turned off. I found the protagonist’s narration conveyed a powerful message that really resonated with me as a writer, illustrator and programmer myself, but she does tend to over-explain when a little restraint would go a lot further, making me ultimately prefer the voiceless version.

Either way, shortly after arriving in the wasteland you will acquire a cigarette lighter and an old-fashioned camera, both of which are crucially important and are stored in your inventory, which displays when you click an icon at the top of the screen. You also find a card akin to a railway ticket. Depositing this in a box at the end of the string of darkened platforms teleports you to a narrow cobbled street outside a quaint café. This ticket-to-teleport mechanism occurs several times during the game, moving you to starkly different environments, such as a mist-shrouded forest, a stately manor house, and a parched desert. While these may sound like potentially grand vistas, the actual navigable area in each is quite small. 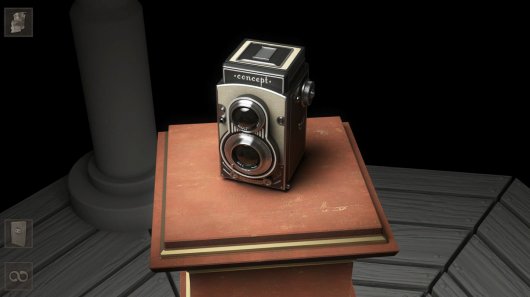 Reaching the different teleport boxes forms the main challenge and it’s here where the camera and lighter come into play. In each environment you’ll find one or two hotspots, such as a birdcage or framed painting, which can be photographed. Such items are clearly labelled with engravings or small cards depicting the camera. Once you’ve taken a picture of something, you’ve captured the idea of that object, which is represented by that picture appearing in your inventory. You’ll then make that idea concrete by burning the picture with the lighter, which produces a pigment to mix into magical paint that you come across elsewhere. You’ll also find special canvases that can be hung on barriers like a barred doorway blocking your path to the teleporters. Once you’ve hung a canvas, you can easily make your character paint an opening that becomes real, allowing you to pass. Each locale you encounter has its own photo op and magic paint to find. Aside from a couple of minor inventory puzzles, this photo-burn-paint pattern forms the recurring basis of everything you’ll do in the game.

Your journey is conducted in typical Myst-like fashion. Clicking the center of the screen generally moves you forward to a new screen, while clicking the left and right sides turns you in those directions. Movement works well for the most part, although I did encounter a few spots where the navigation was a bit quirky and ended up turning me around in directions I didn’t intend. As the environments you traverse are quite small, however, it’s not hard to get regain your bearings when this occurs.

Late in The Search, the presentation abruptly switches from a point-and-click slideshow to a real-time 3D mode controlled by moving the mouse to turn and using the WASD or arrow keys to move. The reason for the switch makes sense in context, but to say more would venture into spoiler territory. This free-roaming section is short and the path you have to follow is basically straight, so those who get motion sickness or have difficulties remaining oriented in a 3D environment shouldn’t have too much of an issue so long as you move slowly. Even those comfortable with free motion might be best served to slow down during this stretch, as I found the mouse sensitivity was extremely high with no way to adjust it in-game. A modest movement of the mouse would send me spinning around in an almost complete circle. Fortunately, once I’d adjusted to using smaller moves, I had little difficulty after that. 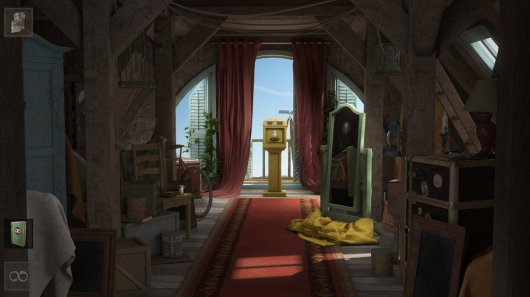 The interface provides access to hints throughout the game, via another on-screen icon, if you get stuck. These are made available in a way similar to some casual games. After you solve something on your own or you utilize a hint, the hint button is temporarily taken away from you, returning only after a minute or two. The text-based hints generally indicate where you need to go or what you need to be looking at, but given the small environments and repetitive actions required to progress, I found I didn’t need them. Still, it’s a nice touch that they’re there.

With its relative ease, The Search is mainly focused on putting across its message about creativity. It took just under an hour for me to complete even with the voice turned on, and I never got stuck anywhere along the way. It’s a brief play time, but then not every story needs to be an epic and this one is just about the right size for its message. Though most players are likely to finish in a single session, the game does boast a fully implemented save system, so you can record your progress at any time if you need to step away. This is a feature I find lacking in far too many longer games these days, so the effort is definitely appreciated. 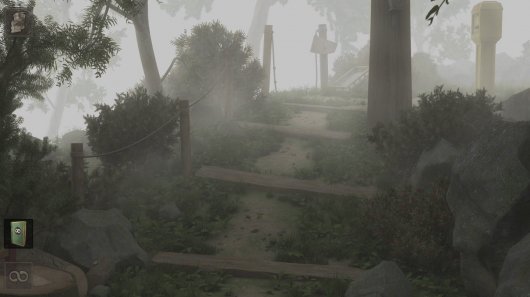 I also really enjoyed the audio presented here. Your journey is underscored by melancholic mood music that conveys the faintest sense of loss. This is echoed in the excellent work of voice actress Cissy Jones, should you choose to leave her voice turned on, whose performance has a wistful sadness to it as she questions her path and her own creative ambitions. Beyond that the soundscape is relatively sparse, with a few typical effects such as the rustling of paper when picking up a note, or the ashy crumble of a photo when you light it on fire. If you do choose to play with the voice and subtitles turned on, you can advance through the dialog more quickly by clicking the mouse button.

Short and sweet, The Search provides welcome commentary about the importance of creativity in one’s life. As a creative person myself, it pains me when I hear others say that they’re not creative and couldn’t even conceive of being so. The message here seems especially targeted at such people, although it’s a good lesson for all. Whether you want that lesson expounded upon at great length or you wish to draw your own meaning from the experience is a choice the game empowers you to make. If you’re looking for a gentle adventure that speaks to being creative or you just want a nice, light experience that evokes the pleasant melancholy of a rainy day, then your search may be over.

Short and sweet, The Search’s slideshow-style adventuring isn’t particularly challenging on the puzzle front but may leave you contemplating your own creativity after the experience.

GAME INFO The Search is an adventure game by Godbey Games released in 2017 for PC. It has a Illustrated realism style, presented in Slideshow and is played in a First-Person perspective.