continue reading below
» Home / Articles / Reviews / We Were Here Too review

Review for We Were Here Too

We Were Here Forever

Adventure games have almost exclusively been single-player experiences to date, but there are signs that this trend is beginning to change. One of the pioneers for multiplayer is a group of students from the Netherlands, who banded together to produce a co-op adventure, We Were Here. The game was designed to be played online between two people controlling separate explorers who’ve been split up in an old castle, talking with one another via microphone to solve puzzles and try to escape. Their debut effort was noble, especially considering that they produced it in just fourteen weeks and released it to the world for free. Though bite-sized, it offered a neat concept and was well received, inspiring the students to tackle further development full-time. Enter the sequel, We Were Here Too.

The idea is the same here, though enhancements have been made to the visuals and balancing of puzzles between players. Operating in first-person perspective, both you and a partner must work your way through various rooms in an abandoned medieval castle. The two of you are physically separated most of the time, meaning the walkie-talkie in your character’s hand is the only means of communication. You can either pair with a random person online through a matchmaking function, or someone from your Steam friends list who also owns the game. I’ve no doubt one could enjoy playing with an internet stranger, an experience I’ve cherished in other online games, but I linked up with a long-time friend and here I think we both benefitted from our existing rapport.

After a brief introductory cutscene, in which the protagonists follow a flare signal through the snow into the castle, you each find yourselves trapped in different rooms. One is full of coffins with symbols above them, the other a spinning mechanism surrounded by candles. You’re left to your own devices right away, using the WASD keys to move and the mouse to look and interact. No instructions are ever given, making discovery one of the game’s joys, though of course you know the general aim. 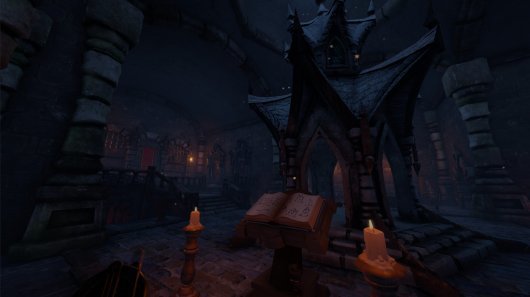 The immediate challenge is twofold: figuring out what you need to do, then employing the solution. As you have no idea what your partner is looking at, it’s always best to begin by describing everything you see. A simple button press activates your walkie-talkie, through which only one of you can speak at a time, a red light indicating that you’re live. You’ll quickly come to realise what environmental indicators to pay attention to and learn that some of your actions impact the other person, like a lever opening a door or pausing a death trap.

Indeed, there is death in this game, though it only results in restarting you at the beginning of the current room. Whether it’s a rising fire or steps falling from beneath, you’ll know it’s coming. There are also segments that have no timer at all, offering a more leisurely pace. I found the challenge level seemed to fluctuate at random. In some instances the solution was clear but the time constraints were extremely tight, so much so that there were a couple of occasions when we had to stop playing out of frustration. Yet other times we breezed through without a second thought. A steadier, more gradual increase in difficulty would have been welcome – as it is, the learning curve is all over the place.

It’s tough to talk about the actual puzzles without giving too much away, but it’s safe to say that some rely on your descriptive ability, like telling your partner what weapon and shield they need to collect. Sounds simple, but it gets tricky, especially when the items are purposely similar. “It’s a tall, thick sword with a triangle tip and knobbly bits at the bottom… yeah, I guess it looks like it’s had a bite taken out of it… the hilt is maybe made of wood?” You’ll think you’re being spot-on, while your partner is scrambling around trying to make heads or tails of your ramblings. It turns out I’m not very good at describing medieval weapons. 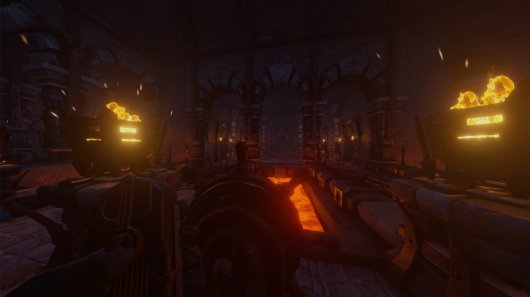 Some puzzles require more logical thinking, like when you are both looking at a game board, though what you each see is slightly different and only one of you can control the pieces. Another is more focussed on dexterity, as one partner whizzes through a maze while the other directs. Looking back, there’s not a huge sum of challenges on offer, but it all felt varied at the time. It’s certainly a step up from the previous game, which relied far too heavily on symbols – though these do crop up here too. Perhaps most importantly, we had fun working together to crack these rooms, even if sometimes I was left wondering whether I was dumber than I thought.

If there’s a story in We Were Here Too beyond escaping from the castle, it was entirely lost on me and my friend. There are a few open books scattered around that you can read, but this puts a screeching halt to the game’s momentum when you just want to get back to solving things. The storytelling technique of “show, don’t tell” needs to be applied here. And frankly, the font choice is so horrendous that the text is difficult to read anyway. Occasionally you will hear a sinister voice from above utter some vaguely threatening nonsense (though the voice acting unintentionally results more in a smile), or catch a glimpse of a bat-thing apparition, but it would have been wise to push this aspect further if it’s going to be included at all. As it stands, it has no real impact and comes across as a half-hearted attempt at creating eeriness.

Visually, there’s a whole load of stone and fire. Grey and red. That’s a bit glib but mostly accurate, being true to what the inside of an old castle might look like, I suppose. The 3D graphics are smoothly rendered in high-resolution, but there’s a lot of repetition in textures and objects. You’ll be seeing an abundance of samey-looking torches, gates and pillars within some very gloomily lit environments that, although atmospheric, do make things hard to see sometimes. That said, there is variety in the layout and shape of the rooms, so you feel like you’re progressing through new locations, like a ritual chamber or a prayer room. Plus, there’s the odd nice detail like snow falling through a gap in the roof or light bursting through stained glass windows. While it’s all perhaps more technically proficient than artistically distinctive, it gets the job done. 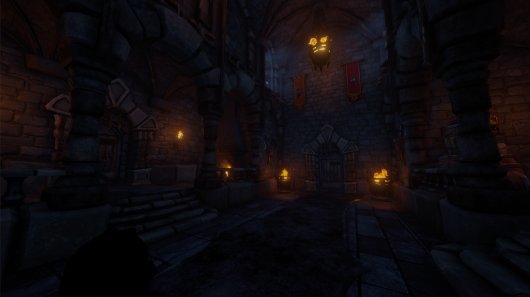 There’s music running throughout, at times making good use of drums and electric guitars while elsewhere you'll hear enchanting echoes and harmonious singing. The former is especially effective when it comes to the timed elements, ramping up the intensity and volume as your doom approaches. The soundtrack never gets stale, which is impressive considering it’s constantly playing, and does a solid job of building a deserted, at times almost spiritual vibe within the castle. There are also encouraging audio cues to signify when you’ve reached a correct puzzle solution – you’ll come to value those positive piano twinkles.

Unfortunately, a couple of incidents soured our playthrough somewhat. The first was when the communication system in the game went down, which seemed to be a server problem we resolved only by jumping into a voice call in a separate program. Technical hitches like that are bound to happen, but it’s not great when your game’s very existence relies on the system that breaks. The second occurred during a puzzle in one of the rare times you can see your partner physically. This sequence required me to give my friend detailed directional instructions against the clock, a task which proved incredibly cumbersome due to a bad graphical stutter (not due to our internet connections) that caused my friend’s avatar to lurch around unnaturally and out of sync with my directions. We had to brute force it through trial-and-error to solve it in the end, which was disappointing. 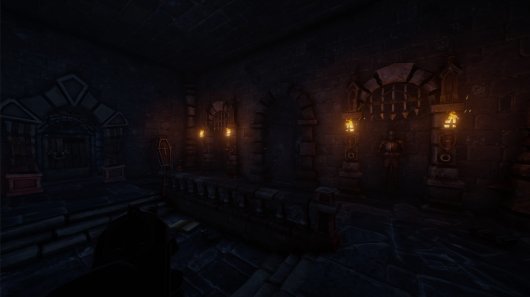 It took me and my friend about four hours to complete We Were Here Too, though I suspect it could be completed in half that time, as there were two sections we got stuck on for an astonishing amount of time. The solutions were clear in hindsight, but our brains weren’t clicking. Regardless, the runtime does feel slight. If you opt for a replay then you could switch to the other character’s perspective to see what you were only hearing described the first time around, plus there’s an opportunity to get a different ending if you find all the hidden levers, but whether you’ll want to is debatable. Most of the charm comes from figuring out what you need to do, which is a one-time thing.

There’s undeniable satisfaction in working together with someone to solve challenges – the moment when everything falls into place is great and you actually get to share in the satisfaction – but I was left feeling that this castle escape adventure could have been better fortified. We Were Here Too is built upon an excellent multiplayer framework, but if you remove the co-op concept it’d be a far lesser experience, highlighting the lack of narrative, fluctuating difficulty and minimal playtime. If you think you might enjoy playing a puzzler with a partner, start with the free-to-play original. If you like that enough then you’ll find the sequel an improved version of the same basic concept.

Working together with a partner to overcome obstacles is a great core concept at the heart of We Were Here Too, though as a castle escape game it isn’t particularly noteworthy beyond that.

GAME INFO We Were Here Too is an adventure game by Total Mayhem Games released in 2018 for Linux, Mac, PC, PlayStation 4 and Xbox One. It has a Illustrated realism style, presented in Realtime 3D and is played in a First-Person perspective.

What our readers think of We Were Here Too

Something to play with someone else

We had a lot of fun with this game. You need two people to solve the puzzles. To bad it was a bit short though and there isnt really a story. Read the review »