We get a small commission from any books sold.
All Bitmap Books
Written by
Cathlyn Vania — January 5, 2018

You know how in magic tricks, the illusionist uses sleight of hand to amaze you, like taking a coin out of your ear, perhaps? Well, solving the puzzles in Jason Roberts’s short but thoroughly unique Gorogoa might feel a little bit like that. Although the game has nothing to do with being a magician, its seamlessly integrated visual design allows you create something new and unexpected out of two seemingly unrelated images, which is like being shown a magic trick and unraveling its secrets at the same time. You can appreciate the amount of craftsmanship that has clearly gone into creating each tile-based puzzle seeping through the carefully-drawn illustrations, and with each chapter you complete, you’ll be further blown away by this magical assortment of sequential art and optical illusions.

Gorogoa centers on the search for a dragon. A young boy’s curiosity leads him to thoroughly research the otherworldly being, which becomes a lifelong struggle spanning his childhood to his elderly years. Experienced wordlessly and entirely in the form of a puzzle, the narrative is mainly divided into five chapters, one for each color of the fruit he must collect to complete his offering for Gorogoa, the mythical beast. What’s interesting is that the storyline dances back and forth from past to future, continually transporting us from dreams to reality and back. The whole experience feels like a set of interconnecting gears set in motion, though not always moving events forward in time.

The puzzle system is presented within the boundaries of a simple four-panel window – it’s like a comic layout design, but without any definitive order. Each panel can be used both on its own and in conjunction with the others. With the right combination, sometimes an animation is triggered, which grants you access to a new panel area. For example, when you zoom into one square, the illustration on that panel may become connected to the one above it to form, let’s say, a cohesive ladder, and your character then proceeds to climb up the ladder, magically moving to another panel! 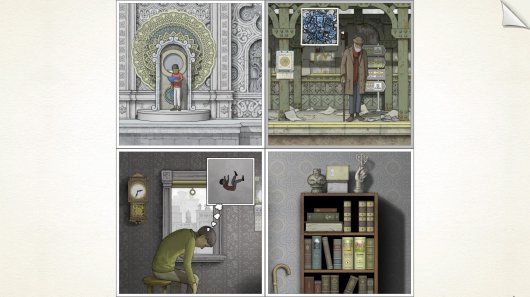 There are actually only a few ways to manipulate the panels, because that’s all your pointers are able to do. This includes moving to an adjoining room within a single scene, zooming in and out, sliding an entire panel to an empty square or even dragging it over top of another panel. A ‘finger’ cursor will appear to highlight interactive objects to click on, while the ‘move’ cursor indicates that you can slide the panel somewhere else.

Zooming in and out of illustrations is one of, if not the most magical recurring experiences in Gorogoa. At times it really is like passing through several worlds in a row. Zoom into those buildings behind the hills, then zoom into their windows to see a man at his desk; zoom into his bookshelf, zoom into the illustrations on his book spines, and now you have landed in an entirely different world. Try zooming back out to the bookshelves, however, and you may find that, no, now that you’ve arrived in this new mysterious location, you can’t go anywhere until you find what’s important in this ‘part’ of the panel.

These scene transitions, although smooth and visually pleasing, might be a bit confusing at the beginning, especially as you’re still adjusting to recognizing patterns and processing the story at the same time. But after a while, it becomes exciting to encounter new places and new kinds of shifts from panel to panel – maybe through a star we click on in a night sky, or maybe through newspaper clippings; you'll never know so it’s always a delightful surprise. 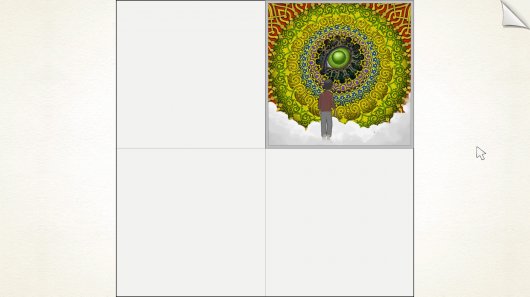 In hindsight, the puzzles are actually very simple, yet they’re extraordinarily clever when actually confronting them. It is the process of figuring out what to do, with no instructions given, that presents the challenge. I discovered that there’s an on/off button in the main menu (hidden until I tried to pause my game) that allows you to enable a hotspot highlighter that displays all the active objects in a given panel, but even with this feature turned on, sometimes I still couldn’t always work out what I was supposed to be doing because the possibilities within just these four interconnected squares alone are far from limited. Sometimes a solution has to do with timing, other times you may have to zoom back away a few times to accomplish something before returning to proceed.

The obstacles get more and more difficult as you collect more fruit and advance further, but the gameplay never feels tedious. Occasionally I made things a lot harder on myself than the solution actually required, trying various ways to piece the panels together while the answer was in front of me the whole time. But ultimately my experimentation was rewarded: I felt like once I solved a puzzle and progressed a little more, everything came together and all my struggles were worth it. I managed to complete the game in three hours, with all the mini-frustrations and amazements it brought along the way. 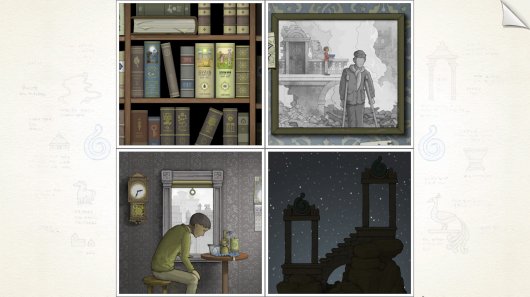 When it comes to non-verbal games, the graphics (and to a lesser extent the sound) become the main aspect we rely on to understand everything from the interface to gameplay to story, and in Gorogoa the impressive visual design is certainly key. Backed by a gentle musical score so subtle you barely notice it most of the time, you’ll pass through gardens adorned with topiaries and playful statues, walk among bombed-out buildings in black and white, and be transported to a land of ancient castles in a sun-swept desert, among the many eclectic scenes. And yet the developer’s detailed illustrations are not only beautiful but very intentional. Every scene is painted as if it were something out of a 15th century history book, and you’ll find that any decorative objects you might encounter in one panel might serve a purpose in the next one. Every transition presents a slightly different visual effect, with thoughtful compositions arranged to subtly guide you every step of the way.

Without a doubt, Gorogoa is a truly memorable experience. While its plot is hardly straightforward, in the end you can see it tells a tale we're all so familiar with: a tale of dreams and obsessions, of faith and hopelessness painted in our main character's perseverance to find answers. The non-linear timeline also works well in keeping you curious, giving you a glimpse of every stage of his life without ever revealing too much. Everything is so well thought-out and mindfully designed, with the art so gorgeously drawn, this game is almost flawless for an experience of its kind, though its minimalist approach and lack of coherent narrative will not appeal to everyone. For a game devoid of words, Gorogoa's mesmerizing interactive storytelling through pictures speaks volumes, even if its message is left intentionally ambiguous, and the experience is sure to stick with you long after you’ve finished.

Gorogoa is a clever, well-balanced tile-based puzzler that shines through its visual illusions. If you’re seeking an innovative game with unique brain-teasers and gorgeous graphics, this game is for you.

GAME INFO Gorogoa is an adventure game by Buried Signal released in 2017 for iPad, iPhone, Mac, PC, PlayStation 4, Switch and Xbox One. It has a Stylized art style, presented in Slideshow and is played in a Third-Person perspective.

What our readers think of Gorogoa

My son and I played this together. He enjoyed it more than me. He had a lot of fun discovering and exploring the game world but I think this is strictly for the kiddos. Nice... Read the review »

very unique, clever and creative gameplay. when i first saw the screenshots i thought it all looked a bit drab. but in-game it presents as very artful with great use of graphic symbolism. Read the review »

A lovely game with rather unique mechanics that manages to tell a touching story without a single word. I played this alone, and then I watched my seven year old son play this game, helping... Read the review »