The Mind of Marlo review

When people think of mockumentaries, they probably think of movies or TV. Even if you're not a fan of the genre, chances are you can name at least one or two off the top of your head. However, when it comes to video games, this approach to storytelling hasn’t really taken hold. Enter Point Bleep Studios' The Mind of Marlo, a short adventure game that presents its story as an interactive mockumentary chronicling one man's struggle with a very severe but utterly bizarre illness: Spontaneous Silly Head Syndrome. Surprisingly, as goofy as the premise sounds, the developers have pieced together a touching, heartwarming narrative about the protagonist’s loneliness and his quest to put his life back on the right track. The presentation might sound gimmicky, but the game itself hits all the right notes.

The story focuses on the titular character, a melancholy fellow whose life has suffered tremendously as a result of his odd affliction. Spontaneous Silly Head Syndrome, as its name suggests, causes our hero's head to randomly transform into one of several unusual shapes every minute or so. In addition to a cat (perhaps the most adorable of transformations), Marlo’s head also changes into those of a slug, a shark, and an ice cube, each of which comes with its own unique set of problems. For instance, when his head is in slug form, he has trouble eating salty foods. As the ice cube, licking his lips is completely out of the question. Yet beyond the physical issues, Marlo also deals with how his friends and family handle his condition. His dad hasn't smiled at him for years, and it's evident that these moments have taken their toll on poor Marlo.

To show the world what it's like to live with his ailment, Marlo allows a documentary film crew to enter his home and capture his daily life. Players explore the character's humble abode, which consists of a handful of rooms, as he discusses his shortcomings and how the disease has essentially ruined his life. You can make Marlo look at just about everything, but instead of getting the standard brief description, clicking on an object in Marlo's home typically triggers our hero to give a brief history of the item and its relevance in his life. More often than not, these stories center around his father (who Marlo feels dislikes him) and his ex-girlfriend Linda, a woman he seems to simultaneously hate and love. Each story is sadly humorous; listening to Marlo describe the trophy he received from his father for "not dying" is both heartbreaking and hilarious. The script features equally amusing and touching writing throughout, which is good, considering you'll spend 90% of your time listening to Marlo discuss his problems. 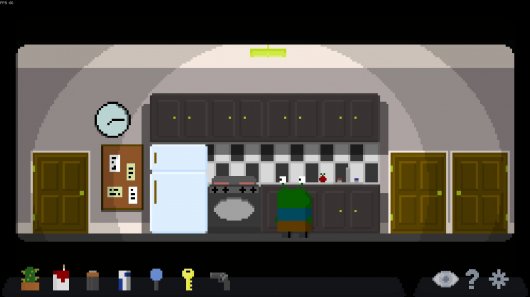 Of course, there's a point to listening to Marlo analyze the many aspects of his disappointing life. During the game you will help the protagonist cure his syndrome, which can only happen if Marlo introduces each head to something it doesn't like. Searching every room reveals a handful of items that, in theory, could help Marlo overcome his condition. Some of the solutions are blatantly obvious – anyone who's ever owned a cat can guess a few things they genuinely dislike – but getting from point A to B isn't always as clear as you'd expect. One particular puzzle seemed beyond simple to me, but actually getting everything lined up to execute the solution required some mental gymnastics. The puzzles themselves aren't overly complicated, but they're not as straightforward as they seem on the surface – thankfully, considering you can still work your way through the whole game in about an hour and change.

Navigating Marlo's colorful world is pretty standard. Clicking an item brings up a few icons showing what you can do with it (regardless of which head Marlo sports at the time). All of the puzzles are item-based, which means you should pick up everything just in case you need it. Utilizing your possessions requires just a few mouse clicks, which will result in either success or Marlo explaining in his unique way that what you're attempting to accomplish doesn't make sense.

The Mind of Marlo sports adorably chunky pixel artwork that's both simple and exceptionally charming, with or without the optional film grain. Each silly head is distinct and unique, and their varied appearance often adds a little extra humor to some of Marlo's more depressing anecdotes. Watching the shark head discuss our hero's failed love life and his desire to burn his ex-girlfriend's belongings in the backyard brings the laughs even though the subject matter itself is pretty bleak. 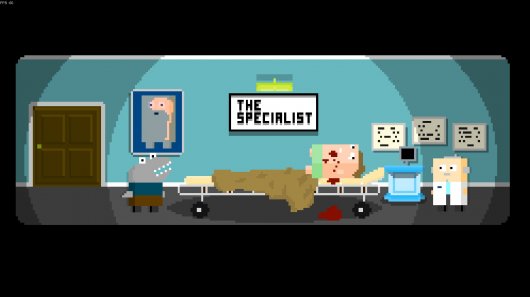 The droll British voice acting is absolutely spot-on, and I doubt the game would have the same kind of impact without it. The piano-driven score also helps seal the game's downtrodden nature. The music isn't overly mopey, but it's moody enough to add a bit of melancholy to Marlo's more upbeat tales. However, that's part of the appeal: Although he's a sad guy who doesn't have very many good things happening in his life at the moment, he's endearing enough that his tales of woe won't compel players to abandon him mid-quest. Sure, he's a bit of a whiner, but given his situation he keeps his emotions in check – for the most part, anyway.

With its delightful artwork and unique mockumentary presentation, The Mind of Marlo accomplishes more in an hour than many games do in eight. It's peculiar, engaging, heartbreaking, and more importantly, an absolute blast to play. My only problem with the experience is that it's so short. As soon as the game ended – with a twist that I honestly didn't see coming – I wanted more, which is probably one of the greatest compliments you can give a game. Point Bleep Studios have crafted something wonderful, and I hope this isn't the last we'll see of Marlo.

Presented as a mockumentary, The Mind of Marlo delivers a short, hilariously down-the-earth story despite the wildly absurd nature of its premise.

GAME INFO The Mind of Marlo is an adventure game by Point Bleep Studios released in 2017 for PC and Linux. It has a Stylized art style, presented in 2D or 2.5D and is played in a Third-Person perspective.

What our readers think of The Mind of Marlo

A short easy tale with a twist

I decided to add this title to my collection after reading the stellar review on this site and seeing its easy availability on Steam coupled with an attractively low price. My interest was piqued even... Read the review »

I'd love to see this concept made into a longer game, there are so many things they could do with the changing heads! I really enjoyed this, a rare game where the humour wasn't just... Read the review »

The voice acting was good, the music was OK, the story wasn't bad though a bit shallow. But the game overall wasn't that good ... Something was amiss. Nothing memorable about it. Read the review »