continue reading below
»   Home  /  Articles  / Reviews  / Apocalipsis: Harry at the End of the World review

Apocalipsis: Harry at the End of the World review

This is the Zodiac Speaking

I can’t say I ever wondered what you would get if you took the no-dialog, puzzle-centric form of a Machinarium or Gobliiins and dipped it into the dark world of a Grimm’s fairy tale, but if I had, I think the result would be very much like Apocalipsis: Harry at the End of the World, from indie Polish developer Punch Punk Games. And that’s a good thing! The darker twist on this familiar format and a distinctive visual design combine to produce something nicely unique about this short but engaging point-and-click puzzler.

From its opening moments Apocalipsis establishes its bleak tone, with one of your first actions being the decapitation of an unfortunate rat. The violence of this situation is downplayed somewhat through visuals reminiscent of ye olde medieval woodcuts. Characters and locations are clearly recognizable but are stripped down in detail in a stylized way, presented as hand-sketched black line art over sepia-toned washes of color. This is not a sunny game, but it’s also not one that wallows in darkness and misery either, despite its subject matter.

Events occur in a non-specified time and place, but everything about the game evokes a period from antiquity. You play as Harry, a character you learn little about save that he is in love with a woman named Zula. Tragically, as the story opens, Zula has been tried and killed as a witch. Now Harry must go on a katabasis – a journey into the underworld – to get his departed love back. Along the way he’ll visit the ramparts of a besieged city, a vast barren desert, and the surreal land of the dead replete with a giant serpent spewing effluent vapors, a large bone pipe organ, and a chamber of hourglasses measuring out the lives of the living. 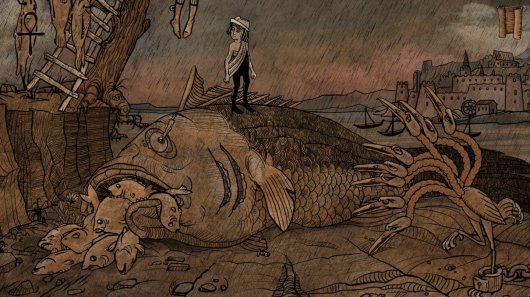 While Harry’s quest is a solo one, he does encounter other characters who will help or hinder his progress. When passing through a ruined town in the wilderness, Harry befriends a famished woman who aids him along his way, accompanying him for a time and able to enter some small areas that Harry is too big to fit into. Less helpful is a hulking monster that Harry must find a way to circumnavigate before reaching the gates of the underworld itself, guarded over by a hooded creature who demands payment to enter. These characters don’t speak, but through their actions they convey their purpose in the story.

Apocalipsis is divided into 23 levels, consisting of either one or two scenes that you can move between. Each stage has a central puzzle that must be solved before moving onto the next. Completing these challenges is done by manipulating parts of the environment – levers, sliders, even the bones of a deceased raven – or by collecting and using a small assortment of inventory items present only in that stage. To accomplish this, you move Harry around in typical 2D point-and-click fashion. The mouse pointer is context-sensitive, changing to indicate when part of a scene can be clicked on to interact with it.

Acquired inventory items are displayed as illustrations on a roll of parchment in the top right corner of the screen. Clicking one of these images enlarges it to show that it is the active object. Once activated, you can attempt to apply that item on any hotspot until it is successfully used or you click it again to deselect it. You can only have one such item selected at a time, and there are no puzzles that require the combination of inventory. 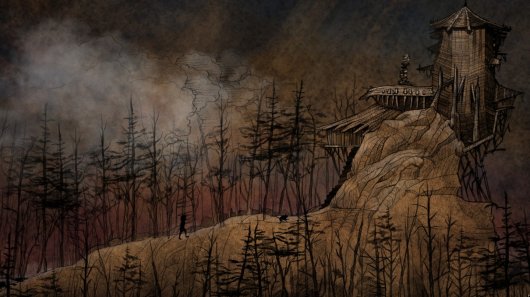 The central puzzles come from these inventory obstacles, like when you need to increase the potency of a cannonball used as a weapon against a kraken attacking Harry’s ship, or from more mechanical fare. At various points you will find yourself sliding linked tumblers to form the correct combination to unlock a door, rerouting pipe fragments, or correctly assembling a Tower of Hanoi. Most of the puzzles require thought, or at least good observation of the elements in your surroundings, but none are particularly difficult. It took me a little over two hours to reach the game’s good ending.

Good ending? Yep, Apocalipsis features two different endings based on what you may or may not have done earlier. Harry has the opportunity to collect magical flowers scattered throughout different areas of the game. Having all of them in the final stage enables the option to get the more satisfying ending. Alternatively, if you don’t have all of the flowers or you choose not to use them, you’ll receive the “bad” ending. Both outcomes are quite brief, consisting of only a couple slightly different animated sequences, and yet both feel appropriate for the tone of the story and the obstacles that Harry must overcome.

While most of the challenges you deal with are about thinking your way through, two of them take a more action-oriented turn. The first involves Harry running across a bridge being bombarded by cannonballs, which hit the ground in fixed places at regular intervals. You must time your movements to dodge in between the blasts without getting hit, so fortunately Harry’s usual languid walking pace increases to a faster run here. The second sequence sees Harry swimming up from the bottom of the sea after a kraken has destroyed his ship. The monster’s grasping tentacles reach for Harry from the bottom of the screen while wreckage from the ship drops from the top. You must swim side to side by clicking to the left or right of Harry to avoid both the tentacles and the wreckage. Dying in either case places you back at the beginning of the scene, or else midway through if you managed to get far enough before expiring. These stages aren’t too hard, although it did take me a couple of tries each to pass them, and you must complete these stages before being allowed to progress further. 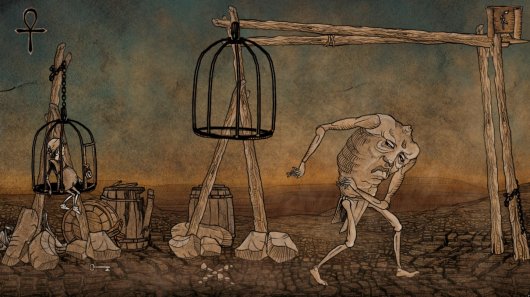 The action sequences obviously involve plenty of movement, but even the non-action-based ones tend to have a number of subtle animations running in the background. Whether they’re small mystic symbols rising from a magic book or a bored jailer drinking while on the job, each environment contains something to help give it a bit more life. They're nice little touches in a game filled with such details.

Once you’ve finished a stage, it becomes unlocked on a map accessible from the main menu. The map can be used to jump to any completed level, but as the puzzles are always the same there’s not much need to replay them. Still, the map can be useful for jumping back to collect any of the magic flowers you may have missed before returning to the final stage to get the good ending. This is a welcome feature, as it means you can easily retrieve the flowers without having to play through the entirety of the game again to do so. The only other real reason to revisit completed stages would be to collect some of the Steam achievements that can only be earned by completing puzzles without making mistakes or in the minimum number of moves possible.

A moody instrumental background score runs throughout the game that instills the melancholy vibe of a rainy day. This fits perfectly with the somber-colored visuals and contributes to the overall gloomy feel. Sound effects are sparse, usually only employed when picking up an item or when interacting with the scene. They do their job convincingly without calling attention to themselves. The other audio component is contributed by Adam “Nergal” Darski, the lead singer for the Polish metal band Behemoth, who nicely provides voice-over narration for cutscenes. The slight tinge of an accent he has reminded me of my German great-grandmother when she’d tell stories of the “old country”, which completely put me into the right frame of mind for hearing an old fairy tale. 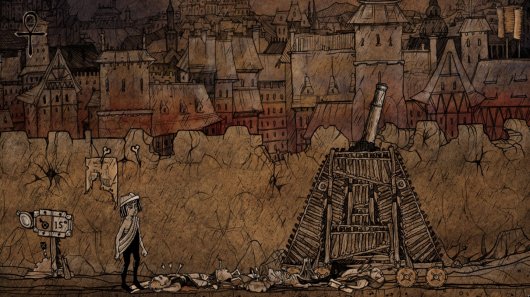 While the cinematics are narrated, no text or voices appear within the actual playable areas. Clues are found solely by paying attention to the environment. On one occasion you have to play a certain melody on a giant bone pipe organ, but don’t worry – no musical talent is needed as the correct keys to press can be discovered with a bit of searching and the use of a few tuning forks. In other instances, clues are provided via diagrams or charts displayed as part of a scene’s background.

It’s certainly not going to be one of the longer or more complex adventures you’ll play, but Apocalipsis: Harry at the End of the World is a short and sweet, melancholic puzzle affair perfect for a rainy day or as a light break between meatier titles. With a hand-drawn aesthetic evoking medieval carvings and a story reminiscent of old fairy tales, you can expect the sparseness of characterization and lack of depth that matches such legends, but the game’s streamlined structure and lesser challenge are a good introduction for novice adventurers and should provide a nice change of pace for more experienced players.

A compelling if somewhat easy puzzler with a unique aesthetic inspired by medieval engravings, Apocalipsis has that melancholic appeal of a Grimm’s fairy tale on a rainy day.

What our readers think of Apocalipsis: Harry at the End of the World