We get a small commission from any books sold.
All Bitmap Books
Written by
Drummond Doroski — August 10, 2018

Note: Though the article content is the same, the review of Dead Secret has been published separately with its own individual rating.

Dead Secret and Dead Secret Circle are murder mystery games starring an intrepid but relatively unknown reporter named Patricia Gable. Each game features multiple suspects, a masked killer (who might murder YOU if you aren't too careful), and loads of clues, often in the form of letters or papers lying around the investigation area. While neither features my favorite aspect of a classic murder mystery – the accusing parlor – each builds to a fairly dramatic conclusion in which Patricia manages to escape with her life and the answers she has been seeking. Both experiences are quite fun and immersive, if a tad short and easy to solve. The two games are very similar in style, but there are some key differences between them, mostly due to indie developer Robot Invader clearly gaining confidence from their first game and increasing what they were able to offer in their second. I wasn't able to play in VR, which is how at least the first game was clearly designed to be played, but even on a standard PC I enjoyed my time with them.

In Dead Secret, Patricia is a gossip columnist in rural Kansas who desperately wants to be a real reporter in a real city, preferably Chicago. She sees her chance to shine when a local professor, Harris Bullard, dies under somewhat mysterious circumstances. With the local police determining that the death was due to "natural causes", Patricia sees an opportunity in the hasty official ruling and decides to visit the crime scene herself to look for clues and discover whether Professor Bullard was, in fact, murdered. Not letting something as simple as a broken arm get in her way, Patricia quickly finds that there are four possible suspects for Bullard's demise: the ex-wife, the young assistant, the professional colleague and the local errand boy. While conducting her investigation, it seems like Patricia might be on to something, because before long she is being stalked by a hostile figure in a green raincoat and a Japanese Noh mask. 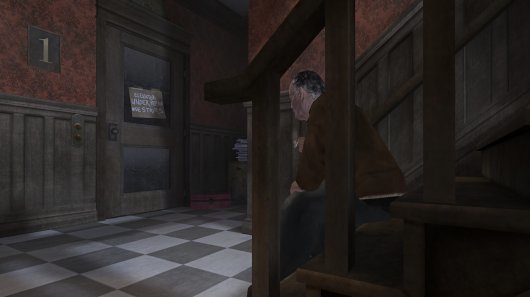 Dead Secret Circle picks up a few years after the conclusion of the first game (holding nothing back in terms of spoiling the ending of its predecessor). Patricia has fulfilled her dream of becoming a reporter in Chicago after her earlier success, but she has been so affected by her experiences in Kansas that she now has trouble even leaving her apartment. She decides, for some reason, that the best way for her to get over her fears is to track down a local masked killer, known only as The Laughing Man, who slices his victims up with a straight razor. Faulty logic or no, Patricia receives a mysterious clue slipped under her door, which leads her to a condemned tenement building in which several suspects still reside. Convinced that The Laughing Man is somewhere inside, Patricia investigates this building and interviews its occupants, all while receiving visions that may, or may not, be based in reality.

Both games are presented in first-person 3D, and the primary gameplay is simple exploration. Drawers can be opened, closets searched, and letters and books read. There are some puzzles now and then, mostly of the "puzzle box" variety. As you proceed, new locations are unlocked, leading Patricia to gradually explore her surroundings and find more and more information about what is going on. Every once in a while the music ramps up as the killer appears and Patricia will have to find a place to hide or a way to escape. Even when her arm isn't broken in the second game, you have no way to fight back, so evasion is the only option. This happens infrequently, however, so it never gets annoying or tired and maintains a level of actual suspense throughout the two games. If you do happen to get caught and killed, you’ll simply be restored to try the scenario again.

Both Dead Secret and Dead Secret Circle also feature a somewhat unusual inventory item, a pair of goggles that somehow taps into your subconscious and reveals clues around you. These are an invention of Professor Bullard's that Patricia keeps after the first case. With these on you'll see words etched on walls and a very disturbing-looking man in a Japanese Oni mask who, while never directly threatening, always made me feel a bit uneasy. The use of these goggles adds another layer of puzzle solving, deduction and creepiness to both games. 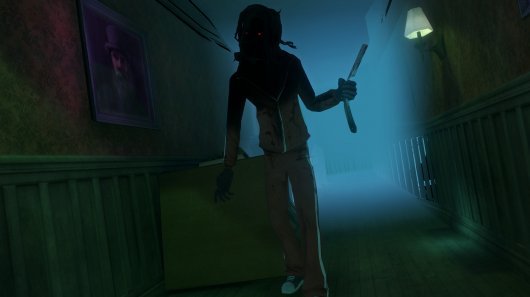 Another way the mysteries are similar is that neither spells everything out for you. You really have to read all (or most of) the clues you find carefully to piece together exactly what is going on. I ended up missing a note in the first game that contained the most probable motive for the killer's actions, though thankfully I was still able to figure out the person's identity without it. While Dead Secret ended up painting a fairly complete picture for me, I had more trouble sorting out the many facets of Dead Secret Circle. In the sequel, Patricia has nightly visions of climbing snowy pathways and picking up statues, which I still don't understand the meaning of at all. I worked out who the killer was, but it was more of a guess than a certainty this time, and I even thought the murderer was using a very different method to kill than they were actually employing. In a game like this, it's hard to say if the fault lies with me not finding a certain clue (or not reading the ones I found carefully enough) or the game designers simply writing a more complex and messier story.

As tricky as piecing together the narrative puzzle can be, the actual puzzles of both games are another matter. The Dead Secret series focuses much more on finding and reading clues than they do overcoming obstacles, so when a puzzle does impede your way, it's seldom difficult. Finding an easy-to-interpret clue or just looking at the right thing with your goggles on is usually all you have to do to find the order in which you need to press certain buttons or enter the right combination into a lock. This didn't deter me from enjoying either game; I was more into the atmosphere and the mystery, after all. But gamers looking for more challenge won’t find it here.

Both games have similar graphics and the overall quality is good, though the visuals aren't going to be turning any heads. There are some differences, however, with Dead Secret Circle pulling ahead by providing more varied locations to explore. Each apartment you visit has a very distinct personality, including Patricia's own, whereas Dead Secret takes place entirely in a single location, the house of Professor Bullard. The first game features some brief but nicely hand-drawn cutscenes and images of its suspects, while the sequel eschews this style, choosing instead to tell its story purely through the gameplay itself, with just some text screens narrated by Patricia to set up the occasional scenario. 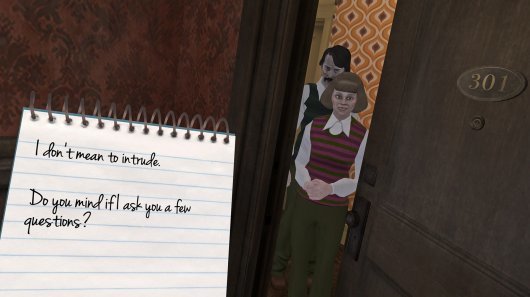 Audio is another area in common between games. Large sections of both mysteries feature stretches of silence, where the only sounds you hear are effects like opening drawers and the clacking of a typewriter whenever the game makes a physical note of something you've found. Occasionally music tracks play over certain sequences. Dead Secret has a couple guitar-based tracks that, while not bad by any means, don't quite seem to match the vibe of the moment. These are few and far between, however. For the most part, the soundtrack in each game is used to keep the tension high by playing a low, steady hum to build anticipation, rising to a quick crescendo if danger suddenly appears. Dream sequences have their own music, mirroring the steady hum of tense moments in the real world, but adding a level of otherworldly eeriness with some chimes and dissonant sounds.

As alike as the games are in most respects, there are some key divergences. Dead Secret requires you to move from point to point when exploring locations, while Dead Secret Circle gives you free range of movement. The first game takes place in a single day, while the sequel takes place over several days and goes back and forth between Patricia's Chicago apartment and the tenement building she is investigating. It's also worth noting that Patricia never meets any of the suspects in the first game, other than the one in a mask trying to kill her; she just reads about them. In the sequel, interviewing suspects becomes a major aspect of the gameplay and you learn as much by talking to people as you do by breaking into their apartments to snoop around. 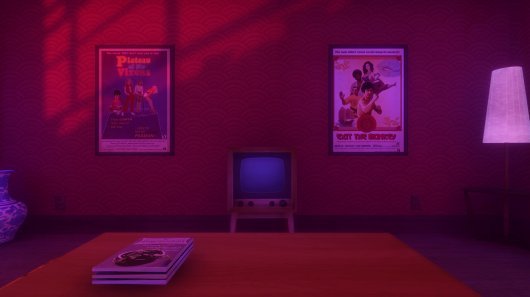 The two experiences also have a very different style of endgame. In Dead Secret, you are directly asked to point out the killer, and a wrong answer will lead to a fairly negative ending. Dead Secret Circle basically tells you to go confront the guilty suspect, but doesn't seem to impose any penalty I could see for visiting an innocent suspect first; they're simply not there and you can "guess again" by going to a different suspect's apartment. I was able to access all of Dead Secret's endings, but only one of Dead Secret Circle's, though it apparently has two.

In comparing the games, Dead Secret Circle is the richer, deeper experience of the two, with a couple more hours of gameplay, interactive characters, and more locations to explore. It also has a more involved plot, the downside of which is that I still had unanswered questions at the end of it. The simpler Dead Secret is not without its charm, however, and the short-but-sweet story kept me engaged the whole way through its three or so hours. Looking for a fun, immersive pair of murder mysteries that focus more on atmosphere than challenge? You could do a lot worse than this series. Just remember to keep your eyes open and read those clues carefully. Oh, and try not to get killed.

Although still lacking much challenge beyond working through its more confusing story, Dead Secret Circle is a longer and more diverse game than its predecessor with the same creepy, immersive atmosphere introduced in the series debut.

GAME INFO Dead Secret Circle is an adventure game by Robot Invader released in 2018 for Mac, PC, Oculus Rift and Gear VR. It has a Illustrated realism style, presented in Realtime 3D and is played in a First-Person perspective.

What our readers think of Dead Secret Circle

It was a pretty fun game with oke puzzles. Most puzzles are not very hard to solve, although I didnt solve the cards puzzle.Lucky you don't have to solve most of them to finish the... Read the review »