The cult of author H.P. Lovecraft has never been stronger in video games, as the master of cosmic horror has got his (tentacled) grip firmly on developers’ thoughts these days. Lovecraft Quest – A Comix Game tries to bring something new to the party, using a mix of classic logic puzzles and choose-your-own-adventure-style gameplay, all framed within the panels of an interactive comic based on the world of Lovecraft. However, even with such a short game its initial ideas become repetitive, and the addition of one final frustrating puzzle was enough to send this writer into a demented spiral more frenzied than the sight of the great Cthulhu himself.

The story starts in a skippable sequence pre-menu screen, with our unnamed protagonist aboard a frigate heading to New England. Inevitably the ship never makes it to its destination, with a terrible storm plunging it and most of the crew into the murky depths below. You manage to make it ashore to a deserted island, but your only passage away from the lapping waves appears to be an ancient dungeon – the Temple of Nameless Cults. Does everyone have their Lovecraft bingo cards ready?

All of this plays out in a beautifully hand-drawn graphic novel style, with each panel representing the next scene in the story. The tale is conveyed in written comic book-esque boxes and font, with the player clicking a “next” box when ready to move on to the following page. The panels aren’t completely static, with one early standout scene drawn from the point of view of the protagonist as he slowing sinks further under the wreck of his battered boat above the waves, his hand outstretched in front of him and framed in inky blue as bubbles move and float around the screen. 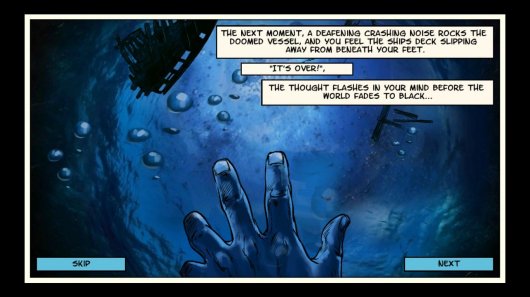 While presented in the same style, it’s a shame that when you enter the dungeon most of the pretty attention to detail is lost in drab grey rooms. The occasional lurking monster spices up the colour palette a little, and a scene where you have to shoot a gun into the darkness is illustrated in true comic book style with the giant word “BANG” ripped in two by a bullet, but otherwise the inventiveness of the artwork at the beginning gives way to the necessity of trawling through rooms and solving puzzles.

There isn’t much else involved story-wise as you traverse the creepy temple in search of safety, and the game gets stuck in its main mechanics. There are three floors to explore, the first two consisting of 20 rooms each to tentatively venture through. Each room is adjoined by two or three others and you must choose which one to enter by clicking on a box neatly entitled “enter room 5” or something similar. However, some rooms are filled with traps, ranging from bottomless pits to great tentacled Shoggoths ready to eat you whole.

If you enter a room that has a trap in an area next to it, the game will warn you: “there’s a draft nearby” for when you’re near a bottomless pit, for example. Your goal on each of these floors is not only not to die (!) but also to find a particular piece in one of the rooms that will slot into that floor’s puzzle, which when solved will allow you to head deeper into the mysterious cave. If you die, you return to the beginning of that floor again, and as the traps are procedurally created, there’s no point remembering which room held a trap the time before as it’ll all have mostly changed your next time around. 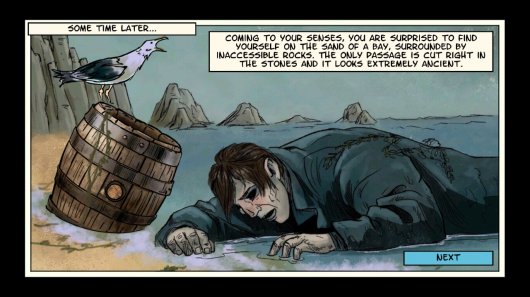 Once you find a map for each floor, the puzzle of finding out which rooms have traps in them becomes quite a fun game of logic, as you can cross reference which rooms were said to have something bad lurking next to them and work out a path through the labyrinth. However, until you find the map, which is in a different room every time you play, there’s very little you can do but enter new areas in a trial and error way, hoping you’ve picked one unoccupied by something wanting to kill you. This makes gameplay a little frustrating and quite scattershot at the start, as you pick random doors without much thought or precision. It might have made more sense to include the map from the very beginning, but perhaps the idea was to lengthen this short game as much as possible, which trundling around for direction certainly does.

If you do end up in the room with a hulking Shoggoth, you’ll kickstart a reaction mini-game. In this you’ll need to quickly choose one of three rooms for the protagonist to run through, with a timer at the bottom ticking down as the monster gets progressively closer to chomping on you. Not-so-cryptic advice will appear to hint at where you need to go. For example, when the three doors are marked with an eagle, a shark and grass symbol , the hint tells you to “follow the path of the earth”. This mini-game adds some much-needed change of pace to Lovecraft Quest – unless you keep dying. If you do, it soon becomes clear that although beginning in a different room each time, the sequence of scenarios you have to react to are exactly the same every time. A little bit of variety even in the order of the situations would have kept this more exciting, but maybe that says more about the amount of times I died than anything!

Other threats don’t take up quite as much time. Smelling a “foul stench” means a Dagon (another mythical Lovecraft monster) is near. You can choose a room to fire a gun into in the hope that it’ll hit the slimy beast, but if you’ve chosen incorrectly and don’t wound the creature, the sound will alert it and you’ll be gobbled up whole. There’s also no mini-game or second chance in avoiding the bottomless pits – if you step into a room containing one, it’s back to the start of the floor. 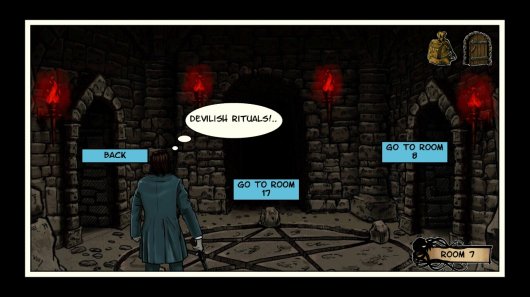 Once you’ve sidestepped the traps and found your piece as well as the puzzle it fits into, it’s time to get solving so you can open the door to the next floor. Both of the first two floors have quite similar puzzles – one featuring tiles in the wrong places that need to be slid into the right sequence to depict an image (Cthulhu!), and the other consisting of four cogs which each need to be turned so that they too form a picture the right way round. Both of these tasks are fairly easy and even with a bit of mindless clicking can be overcome.

When you reach the final floor, there’s no more room-hopping but instead three bigger puzzles to solve. It’s here that some form of in-game notepad might have been a helpful thing to include, especially as one riddle basically consists of you pressing many symbols in the right order. (Cue bits of paper with weird scribbles on them filling my room, making me look not unlike a cult member myself.) And then there’s the final puzzle. Appearing simple, it merely requires you to turn 16 horizontal rods vertical, opening four locks to the next door. However, turning one rod vertical turns the whole row or column of rods next to it too. It’s hard to put across the frustration of not being able to work out a logical pattern to the puzzle, particularly when previous conundrums were fairly straightforward.

Shamelessly after many, many attempts I found myself seeking help online and even then only worked out the solution because it was alluded to as being similar to one in another game made many years ago, so I looked up the walkthrough for that instead. No doubt some minds more akin to the intellectual Lovecraft will be able to figure this out much quicker than I did, but the overriding feeling I was left with so close to the end of the game was annoyance. Some form of hint system, even if still kept fairly vague, might have helped alleviate the irritation at the final hurdle. 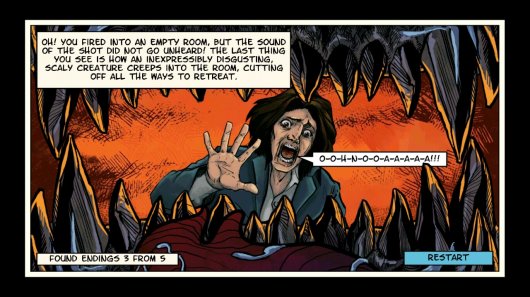 Most of the sound is made up of effects such as dripping water and monstrous grunts and wails, set alongside a short spooky-sounding score playing in a loop, different for each floor. Although relatively innocuous for most of the game, this repetitive soundtrack during the last puzzle quietly drove me round the bend, and eventually forced me to forcibly jab the mute button.

After one final mini-game, the story ends quite abruptly with a typically Lovecraftian (read: depressing) take on events. Much like in a choose-your-own-adventure book, which route you take will leave you with one of six endings – one “true” outcome on completion of the entire game, or five others to experience throughout, depicting your character dying in some grisly fashion (and sending you back to the start of the current floor to try again). This adds some replayability to a short game, which – annoying last puzzle or not – should still be wrapped up within two hours max for a single playthrough.

The game is available on PC, but also on Android and iOS devices, and it’s the latter formats that make the most sense here. The short mini-games and self-contained puzzles perfectly lend themselves to the pick-up-and-play approach of mobile gaming. Regardless of platform, OGUREC’s adventure initially stands out for its visual style and seemingly choice-driven gameplay, but ultimately fails to build on this promise. Lovecraft famously hated games, noting that they and sport “ought not be ranked among the major phenomena of life”. By merely borrowing some elements of the author’s mythos to enhance a series of puzzles and timed events, however beautifully drawn, yet leaving behind the compelling story that makes that universe so rich, Lovecraft Quest – A Comix Game unfortunately does little to prove Howard Phillips wrong.

Stylish to look at but short on substance, Lovecraft Quest: A Comix Game has a few fun puzzles to beef up its brief story, but too much repetition stops it from becoming a Great One.

GAME INFO Lovecraft Quest – A Comix Game is an adventure game by OGUREC APPS released in 2018 for Android, iPad, iPhone, Mac, PC and Linux. It has a Stylized art style, presented in Illustrated text and is played in a Mixed perspective.

Lilly and Sasha: Curse of the Immortals

What our readers think of Lovecraft Quest – A Comix Game