A number of virtual reality games have attempted to use the budding medium to press players face-first into engrossing narratives, making us center-stage participants in whatever drama the developers have chosen to present, while maybe cracking a few puzzles along the way. Secret Location is taking the opposite approach with Transpose, sacrificing story in favor of a wicked barrage of puzzles. It's the kind of game that really could only work within a VR space, requiring a goodly amount of player physicality even while dramatically stretching the limits of spatial reasoning and foresight. However, between its sparse attempt at providing some sort of narrative framework for its mental gymnastics, and several puzzles that are perhaps a few steps too convoluted, the experience isn’t as fully palatable as it really should have been.

The game transports you to an otherworldly environment, some sort of man-made construction contained within a wide open space. The setting appears to suggest a kind of extremely large spaceship, or perhaps an entirely alternate dimension given its vivid colors and psychedelic backdrops. Here you must traverse a semi-circular walkway shooting off into three tangential areas, each containing a dozen or so puzzle rooms. By solving all the puzzles in each area, a machine is activated that sends a colored beam of light back to the main hub room. When the purple, red and yellow beams are all restored, another section opens up to reveal the game’s conclusion for those few that manage to make it that far.

The gameplay objective can be quickly summed up: insert a series of small cubes into terminals within each level to restore the crystals that emit that area’s colored beam of light and unlock the way forward to the next set of puzzles. Players control a floating torso with full range of arm and hand movement in order to hold onto the all-important cubes in a free-roaming first-person view. 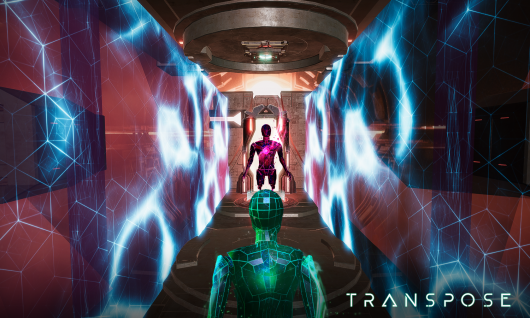 This is where things quickly take a turn for the complicated. Though your virtual incarnation isn’t visibly fettered to the ground, you are still bound to the normal laws of physics and movement, only able to move over solid surfaces except when using a short-distance VR warp jump. Transpose records each move you make as you navigate around the environment, pull switches, pick up and sometimes throw objects. By ending the recording loop (essentially pushing STOP), you’ll be respawned as a whole new avatar, called an Echo, and are free to carry out all-new actions while your previously-recorded Echo performs its assigned duties. This process can be repeated over and over, as many times as needed, with more and more programmable avatars available to you in later levels.

For example, to get a cube across a wide gap in a level, you would need to grab the cube and approach the gap with your first avatar, then take aim and throw the cube far enough to clear the gap, being mindful of where it lands. To start up your second avatar – the receiver, if you will – you can choose a new spawn location, this one on the opposite side of the gap. (Additional spawn points, when provided, can also be oriented on ceilings or vertical walls, tying any Echo spawned there to its own gravitational axis, essentially turning up into down, left into right.) From this new starting point, the second Echo would simply need to approach the gap from its own side and wait for the first Echo to pass the cube their way. One successful catch later, and the obstacle has been overcome.

Over the course of the next 10-15 hours, this opens up many reality-bending possibilities, most of them far more complex than the act of playing catch with a future version of yourself that doesn’t yet exist except in your imagination. It’s quite a clever setup, but when one considers that late-game levels require coordinating up to eight versions of yourself, all recorded one at a time and all needing, in some way, to interact with one another, matters become exponentially more challenging.

Timing is everything in Transpose, and the most compicated levels will force you to construct intricate and carefully-timed ballets of bodies moving to and fro, passing objects off between each other, throwing switches, and riding movable platforms. Previously-recorded Echoes can be aborted and re-recorded as often you like, with the understanding that an interruption like this is permanent and will likely affect other avatars further down the chain of events. A handy slider built directly into the avatar’s left arm allows you to accelerate time in order to speed up recorded events while waiting to jump into action at a certain moment. The process of accurately pegging a target by throwing the cube, sometimes over large distances, can be rather inaccurate using the PlayStation VR headset and Move controllers, though waving your arms around in the air in order to receive a long pass is at first quite amusing.

Transpose’s puzzles continue to add increasingly convoluted wrinkles all the way through. Unfortunately, as one approaches the endgame, some obstacles become far too difficult to be called anything but frustrating. Keeping track of the constantly shifting gravitational pulls can be a monumental task in and of itself. Monitoring relative locations of Echoes, switches, and items in levels that feature separate avatars bound to floors, ceilings, and walls is near impossible. At this stage, persevering and eventually brute-forcing through is the only strategy for survival, with a few late puzzles requiring so many restarts and reconfigurations that they can easily last upwards of an hour each. Challenge can be a lot of fun, but it is carried to the extreme in later parts of this game. 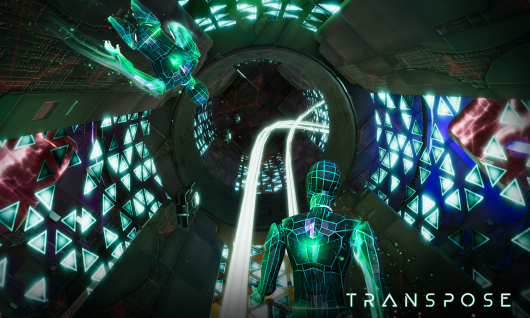 Being set deep within a cavernous, hulking structure reveals about as much dimension to Transpose’s narrative as it’s ever going to get, as ambiguous as it may be. The alien architecture, distant vistas, and monolithic pillars filling the interminable otherworldly space encourage far more conjecture than the cryptic written snippets that appear prior to each new level, even if definite answers are never provided. The sound design, consisting in large part of ethereal background music, does its own part in furthering this effect. Though no voice-over is provided or even needed, Transpose’s art and audio do a great job of projecting you into the game’s own unique plane of existence.

Though anyone looking for a comprehensible story will be frustrated here, puzzle fanatics will get a tasty meal to digest in Transpose, as it bends time and space in wholly unique ways. The only gameplay criticism, apart from a few VR control quibbles, is likely to be leveled at the extreme difficulty in some of its late-game content. Fans of the genre, however, will find hours of out-of-this-world challenges to enjoy here, even if some of them will leave you feeling beside yourself.

A time-bending, physics-based VR puzzler isn’t going to be everyone’s cup of tea. However, Transpose stands out even within its niche with some truly innovative gameplay mechanics that puzzle fans should definitely check out.

GAME INFO Transpose is an adventure game by Secret Location released in 2018 for Oculus Rift, PlayStation VR and HTC Vive. It has a Stylized art style, presented in Realtime 3D and is played in a First-Person perspective. You can download Transpose from: We get a small commission from any game you buy through these links.
The Good:
The Bad:
The Good:
The Bad:

What our readers think of Transpose