Lucid Dream is a thriller-style point-and-click adventure involving Lucy, a troubled youth who navigates a surreal world in a determined effort to save her mother from despair. In order to do that, she’ll need to return her father to life after a tragic traffic accident that also left Lucy wheelchair-bound. The artwork is impressive and the puzzles are creative and often fairly challenging, which make up for somewhat wooden characters and a dry narrative that, even in light of the game’s surrealist nature, yields a story that is more a patchwork of bite-sized ideas, as opposed to the dreamscape odyssey it wants to be.

Lucy’s life following the unfortunate accident is painted as a very bleak existence that has left both her and her mother despondent, grief-stricken and afraid. Faced with this dark new outlook and many trips to a specialist doctor, Lucy vows to somehow make things better. She soon gets her chance when she’s whisked into a world of dreams where she is again able to make use of her legs. After assisting the friendly, satellite-collision-prone Moon there, she makes her way to a very tiny, very beautiful planet and the residence of the ancient Oneiromancer, who promises to solve her problems in return for her signature on an obviously foreboding contract. Despite several reassurances that her wishes will come true, however, many of Lucy’s hopes remain unfulfilled and she finds herself instead falling deeper down a cosmic rabbit hole filled with gods, creatures and spirits in search of answers and her dear departed father.

Although Lucid Dream’s characters are not voiced, they are all creatively designed and visually interesting. The Oneiromancer, for example, appears as a man in a sharp suit and tie whose featureless face seems to be made of antler horns and a large golden egg. There is also the Dream Weaver, whose face hangs in the center of a Native American Dream Catcher that shares its thread with the Weaver’s unruly beard. Artistically disembodied faces are somewhat of a running theme throughout the game, and the suspended, paint-dripping head of artist Salvador Dali inserted alongside the clocks of his best-known works also nods to Lucid Dream’s Surrealist inspirations. Despite the visual appeal of these characters, however, I was often left with the impression that they had little to say that was of value to the story, which, as a consequence, left them both aspects feeling two-dimensional. They rarely even offer compelling insight into the dream world throughout the journey, making many of these interactions simply accessories to move the player to the next set of puzzles. 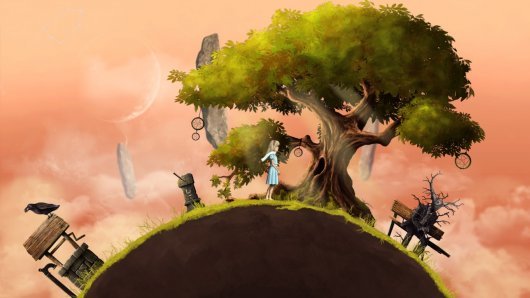 The beginning of Lucid Dream focuses on Lucy and her mother’s home, presenting a gloomy and unforgiving reality dominated by dreary colours and worn objects encased in shadow. The game soon opens up, however, to more magical locations that are wildly varied. A forest landscape full of enormous trees, for example, is populated with fearsome beasts and even a friendly winged elephant. There are also more sci-fi and grim fantasy locations built from metallic, alien-like infrastructure and giant-eyeballs. Attention is frequently given to lighter artistic touches as well, such as the use of simple paper stars strung from the night sky along a suburban rooftop.

Although the hand-painted backdrops are admirable, there is limited animation save for Lucy’s movement and a few very short cutscenes early on. The scarcity of motion is not an issue in itself, but there is a noticeable dearth of animations for even the most basic of in-game tasks. A simple extension of Lucy’s hand to depict picking up items would, for instance, have gone a long way towards matching the benchmark set by Lucid Dream’s attractive art style.

One of the game’s most impressive assets is its abundance of creative puzzles. Overall I thought there was a good balance between traditional item-hotspot problems and non-inventory puzzles such as tile-sliders and instruction-based tasks. I especially enjoyed one puzzle where I was required to follow a recipe to brew a potion using a set of alchemy equipment, and another where I had to put different crystal shapes into a machine to divide them and re-combine them with others. Astronomy-themed puzzles also feature heavily, and I liked the process of selecting fish on a fruit tree to align their shining eyes with a nearby star constellation – a truly bizarre and entertaining experience. 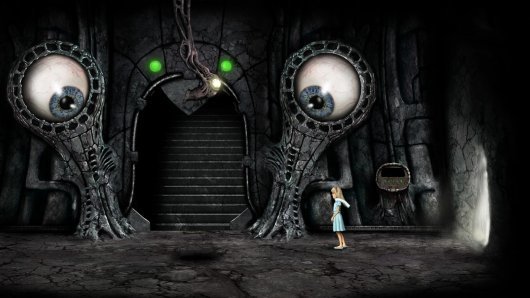 In addition to the obstacles being thoughtful, they are often rather difficult, and I found myself thinking deeply to obtain solutions to some. Certain puzzles can even be unduly frustrating, as was the case for one in particular that involved twelve portals and four removable buttons that I struggled for the longest time to complete. This was, fortunately, one of only a few unreasonable obstacles and generally I found the majority to be both challenging and fair. There is a hint system that can alleviate the occasional migraine-inducing objective, which takes the form of Lucy’s journal that can be selected via the inventory bar, but a timer prevents you from relying too heavily on solutions by forcing you to wait eight minutes before the next available hint. I eventually made use of this feature with the portal problem, though I found deciphering the hint illustrations was itself another puzzle.

The music throughout alternates between the ominous music box-like theme of the real world and the ambient, lofty tones of the dream world. Bells and chimes seem to be popular accompaniment in point-and-clicks these days, and Lucid Dream also includes them in its more magical environments. The use of music and the degree to which it seems to fit the context of Lucy’s environment is commendable, and I felt that the score here always suited the surroundings, such as the land of enormous trees and its wooden xylophone-heavy soundtrack. 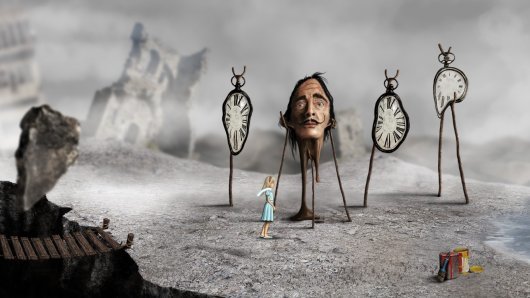 Lucid Dream’s interface is easy to use, as you can walk (or wheel) and interact with the environment through a single left-click. Lucy’s movement is almost entirely horizontal, creating a side-scrolling-style adventure. The inventory system is similarly simple and effective, revealed as a bar at the top of the screen that appears when moused over, allowing items to be combined with other objects and the environment to solve problems. Navigation, though, is somewhat unintuitive on the rare occasion that diverging paths towards different areas exist. When this occurs, clicking to change tracks is sometimes unresponsive, meaning that you must guide Lucy to a place beyond the fork in the road before she can be moved along an alternative path.

Everything considered, Lucid Dream offers a wide range of creative and interesting puzzles that are strewn throughout a gorgeous surrealist world. The experience is noticeably limited, however, by the execution of the story, which is conveyed through unremarkable dialogue and shallow characters. Although the troubled youth premise and point-and-click thriller idea appealed to me, I often felt that Lucy’s quest came across as disjointed and somewhat aimless. And while most of the obstacles are fair, at times they are definitely not. I managed to complete the game in seven hours, but three of those were spent determinedly working through one very uncompromising puzzle. I still recommend Lucid Dream, but mainly to those who are interested in puzzle-solving and the aesthetics of dreamy landscapes. If you are after a gripping story, then this might not be the game for you. For those, on the other hand, who love a good challenge and appreciate imaginative art, you will likely find something of value here.

The large number of puzzles and colourful range of environments make Lucid Dream a worthwhile experience for those who care more for problem-solving and exploration than narrative.

GAME INFO Lucid Dream is an adventure game by Dali Games released in 2018 for Mac and PC. It has a Stylized art style, presented in 2D or 2.5D and is played in a Third-Person perspective.