Loiste Interactive’s INFRA is a bit of an anomaly in gaming. You’re not a detective, a space pirate, a treasure hunter or mystical warrior. You’re just Mark, a structural analyst doing his job, armed only with a camera, a flashlight, and an untraceable accent. While the game does dabble in conspiracies and murder, it is primarily concerned with more grounded problems like restoring power to parts of the city, repairing a water treatment plant, and navigating out-of-order metro tunnels. In a medium where nearly everything is a power fantasy, it’s strangely refreshing to play an utterly average guy with a boring job. Unfortunately, well after the novelty wears off, the game is still going, and going, and going – occasionally great, sometimes frustrating, and very, very long.

INFRA is a first-person puzzle adventure about exploring and cataloguing the decaying infrastructure of the city of Stalburg (which is never explicitly placed in a country but appears to be in Germany or a similar Central European nation). Mark, an analyst for the National Consulting Group, is tasked with inspecting a nearby dam and tunnels for structural damage. Discovering that Stalburg’s facilities are in far worse condition than expected, he soon finds himself fighting for survival in a lengthy trek through tunnels, plants, sewers, and factories. As you explore the city’s crumbling underbelly, you’ll solve puzzles and take pictures of structural damage while dodging cave-ins, exposed wires, and bursting pipes.

The game controls simply enough. It’s played with standard WASD keys and mouse and features decent controller support, though it can be difficult to accurately target small items and hotspots using the thumbsticks. Gameplay is generally split between two types: mechanical puzzles that involve learning how the current facility functions and then restoring it to working order, such as lowering a drawbridge by properly setting the warning lights and learning its computer interface, and environmental puzzles like piling boxes to reach overhead pipes to bypass a field of toxic mushrooms. Throughout the city you’ll find signs of wear and tear or outright catastrophic damage and you are encouraged to take pictures of these. Doing so doesn’t really accomplish anything other than unlock achievements, but it goes a long way toward selling the conceit of playing as a structural analyst. 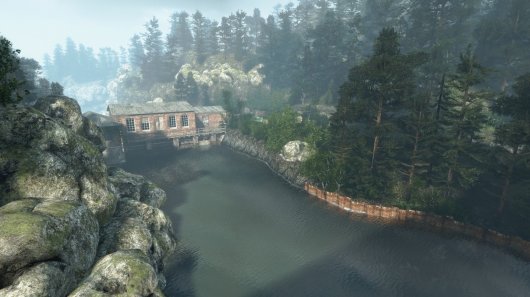 Though the game is ultimately linear, each stage you explore is sprawling and detailed. A given level might include two or three large multi-story buildings and a decent chunk of wilderness surrounding the area. That kind of scale requires you to carefully and deliberately peel apart the environment looking for items, clues, and machinery that will help you move forward. However, it’s not always clear what “forward” is – the size and density of the levels are both boon and curse. You are rarely given much direction upon entering a new area, so it’s up to you to figure out not only how to solve the puzzles, but even to figure out what exactly the puzzles are. In a building full of broken machinery, pipes with valves, and locked doors, which elements are part of a puzzle and which are just decorative? For better or worse, INFRA doesn’t often make it clear.

Sometimes this uncertainty lends the experience a uniquely immersive feeling, as if you truly are in a real environment that has not been laid out solely for your enjoyment. In these cases, solving puzzles feels like true mastery of a complex system. (Hey! I just restored clean water to the city of Stalburg by myself!) Just as often, though, it feels as though the game just isn’t giving you enough guidance to work with, leading to a lot of blind stumbling around, flicking switches and turning valves while hoping something happens.

Muddling things even more is the fact that many puzzles are optional. You don’t HAVE to fix everything you come across, but you often can, leading to unlocked Steam Achievements or perhaps a slight change in a co-worker’s email or line of dialogue later on. Other times, puzzles are essential to progression. It’s rarely apparent which is which until you walk through the (often invisible and unexpected) trigger that ends the level and pushes you on to the next stage. 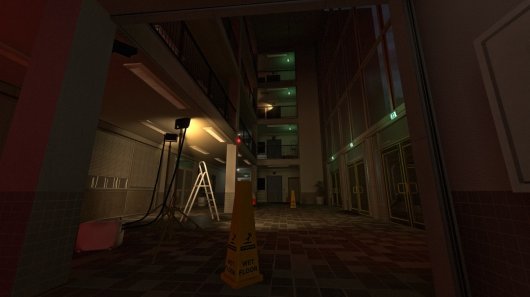 Much of the game sits on a knife edge between demanding and frustrating: on one side are richly detailed environments that smartly dole out just enough information to help you solve intricate but rewarding sets of puzzles that require focused attention, spatial awareness, and an understanding of ever-changing mechanics. On the other is a game that ignores years of common sense game design, placing tiny items in obscure dark corners, failing to differentiate between important parts of the environment and extraneous detail, allowing players to accidentally but irreversibly leave an area behind, and generally not giving any clue about what the hell you’re supposed to be doing.

The line between those two sides can be surprisingly blurry, and everyone’s mileage will vary. Surely there will be players with enough perseverance to appreciate having to find a fuse hidden in a cardboard box on the top shelf of a storage room with absolutely nothing hinting that it’s there, or solving a puzzle that requires about a dozen different valves strewn across a massive area that must each be set correctly with no real indication of why the correct combination works. But even the most patient player will be tested by the puzzles that rely on wonky physics or instant-death obstacles (or both, as when you throw crates across a canal to create stepping stones, only for the physics to freak out and kill you as soon as you dip a toe into the water). In my experience, INFRA was 50% pulling my hair out and 50% fist-pumping in triumph.

Although there are plenty of great sequences here, the bad ones become increasingly frustrating and difficult to ignore as the game stretches to an almost comically long playtime. INFRA was initially released in three Early Access episodes, and that very well may have been the ideal way to play it. Each episode would have felt like a hearty, full-fledged release. Play them all back-to-back, however, and the game starts to overstay its welcome. I clocked between 20-25 hours and that was without seeking many of the collectibles and secrets. For some games, that would be a perfect length, but a game consisting of a near story-less progression of crumbling industrial buildings and valve puzzles has trouble maintaining momentum over such an extended duration. I enjoyed my time with INFRA overall, but found myself wishing it was over for much of the second half, especially by the time I left three hours’ worth of dark metro tunnels and emerged into the game’s third water treatment plant level. 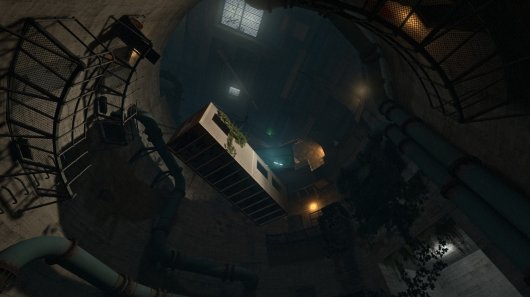 If there was more going on narratively, that padded length might not chafe so much, but what little plot exists is forgettable. There’s something about a conspiracy to scuttle a number of utility companies and a storyline involving a rapidly spreading strain of luminescent, poisonous mushrooms. It’s fleshed out by notes and audio recordings scattered throughout, but the mystery just isn’t enough of a draw to sustain interest, and the protagonist is totally divorced from the stakes. It doesn’t help that the voice acting is uniformly awful, with Mark having the most dialogue and giving the worst performance.

Now, let me be clear that I actually DID like INFRA quite a bit. The atmosphere is impeccably realized: it’s cool to wander around places that feel like they don’t just exist for you to conquer – when you visit a nuclear power plant, it feels like a nuclear power plant, not a paintball arena disguised as one. There’s a pretty astonishing variety of locations and art considering the small team behind the game, from a dense downtown district to sleek modern office buildings to grime-filled sewers and a creepy, rotting houseboat. The sound design lends a wonderful sense of place with its creaking metal, dripping water, and distant hum of heavy machinery. The soundtrack is sparse but appropriate. This isn’t a horror game, but it milks the inherent tension that comes from being stranded underground to generate its own kind of quiet terror. And when you do finally emerge back into sunlight, the relief is palpable – but temporary, as you inevitably dive back into darkened tunnels soon enough. Above all, when the puzzles work, they really work, providing a tremendous sense of accomplishment at having finally solved them.

At its best, this game reminds me of the puzzle-focused sections of the Half-Life series (which makes sense, considering the game began as a non-commercial Half-Life 2 mod). As a big fan of that franchise, this is a high compliment. I just wish it were more consistent. Perhaps Loiste needed to be more willing to kill their darlings, cutting elements that weren’t working as well as they’d hoped, or simply when enough was enough. Even so, INFRA proves to be a fairly compelling dive into rarely-explored territory. Just know that alongside your camera and flashlight, you’ll need to come packing a large reserve of patience and forgiveness if you ever hope to reach the end.

GAME INFO INFRA is an adventure game by Loiste Interactive released in 2017 for PC. It has a Illustrated realism style, presented in Realtime 3D and is played in a First-Person perspective.

What our readers think of INFRA

I've always wanted to visit abandoned factories and industrial areas. In a real life, however, it's a kind of complicated matter. First of all, it's really dangerous (as this game neatly demonstrates!) and also partly... Read the review »