Review for Beyond Eyes

We get a small commission from any books sold.
Written by
Merlina McGovern — October 7, 2015

Imagine the world as a blank white canvas – a world where you cannot see anything. Your daily life, crossing busy car-filled streets and navigating yards with barking dogs, becomes treacherous as you rely only on your other senses to make your way through it all. It can be scary, yet still leave room for a life of wonder and beauty, as we learn in the interactive tale of young Rae in Beyond Eyes. This serene meditation on experiencing life without sight will have you exploring its imagined world in a new and utterly gorgeous way, even if it is devoid of puzzles and light on any actual gameplay along the way.

The story begins with young Rae playing with her friends on a sunny summer day. The world is rendered in 3D entirely using a watercolor scheme. Pastels and summery greens present a bucolic backdrop for the play of happy children. Their lighthearted laughter fills the air, as do the pop and boom of multicolored fireworks… And then the lone wail of an ambulance. And the screen goes white.

Pale tendrils of color fill the screen once again, finally allowing you to view young Rae first in a hospital bed and then after a while perched on a bench. She appears seated by herself, but an ocher-colored cat soon joins her; Rae calls the cat Nani. Nani visits often, the sound of his mewing drawing Rae around the yard as she follows the feline in a simple game of hide and seek. The game is complicated, however, because Rae has lost her sight, presumably as a result of fireworks gone awry. 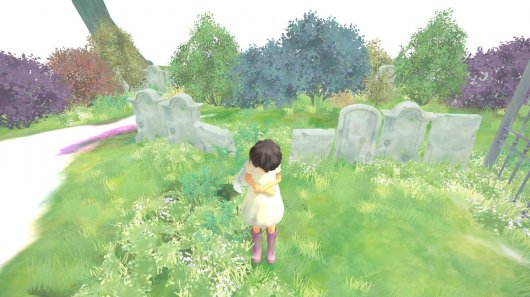 To help Rae navigate her suddenly handicapped world, you’ll use simple controls. I played the game on PC, using my mouse to pan the camera around and the WASD keys to move Rae. The space bar allows you to interact with objects in the game, though any interactivity is few and far between. You will have the occasional turnstile to climb over or stepping stone to hop across.

The world is a blank slate for you just as it is for Rae, making exploration a challenge. But unlike Rae, as you slowly move her character forward, the world around you will fill in with translucent swirls of color that solidify bit by bit into actual objects, rewarding your exploration with beauty. At times, as you look off into the white distance, shimmering colors accompanied by sound like the tinkle of Nani’s bell will pulse at the periphery of your vision and hearing. By listening closely and looking carefully, you’ll be able to determine where the sound is coming from and move Rae in that direction.

Time passes as you explore Rae’s immediate environs, with the initial warm summer dripping into the mellow yellows, oranges, and burnt siennas of fall before crystalizing into the crisp white of winter. As spring unfurls again, Rae decides to leave the comfort of her home to explore the world looking for Nani, who has begun to visit her less frequently. 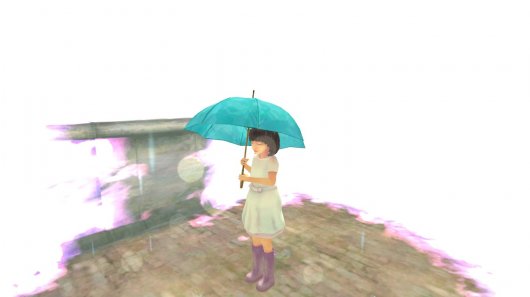 Outside of Rae’s home the world is much less comforting, surrounding you with the deep distant gongs of church bells or the sudden flap of wings as you disturb a flock of birds that suddenly breaks into flight. Though your movement in the game never progresses beyond a very slow walk, there are still moments of tension heightened by the game’s method of slowly unveiling your path before you. I could hear the burbling of a creek and made my way toward it. As my white screen filled in with color, I saw the water below me and slowly moved ahead, hesitating. But just as it seemed I would step directly into the water and I could feel vertigo rising in me, charcoal grey swirls solidified into the stones of a bridge that I hadn’t realized I had stepped onto, safely transporting me across the chattering stream.

Beyond Eyes makes wonderful use of sound and music, with a serene interplay of wind instruments and piano weaving through the background; the music intensifies as Rae encounters dangers out in the world. As Rae explores, you’ll hear the lowing of cows or the plip, plip, plip of raindrops pattering on an open umbrella. Her footsteps change from the hard slap of boots on stones to the soft crunch over grass as she moves from one area to the next. There is very little voice acting, with Rae occasionally calling out Nani’s name in a quiet voice or conversing only a few words with a little girl she meets. Rae will often softly moan in fear when she meets with scary and unfamiliar sounds. 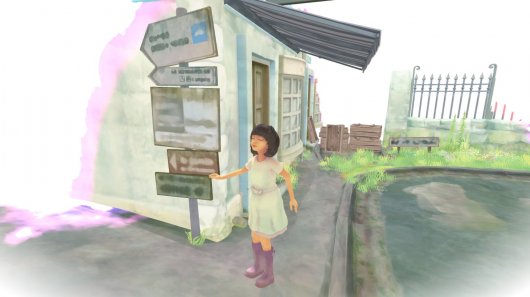 Though the sounds near Rae’s home may be instantly recognizable, as you get closer to distant objects, part of Rae’s discovery is that they can turn out to be quite different in reality. Farther out in the world, you will hear the friendly murmur of water, similar to a fountain close to home. As the sound draws you nearer, an image begins to form of what appears to be the same fountain. When you get closer, however, the lines waver and then solidify into a less-than-scenic gutter and pipe closed up by a rusted grate. Elsewhere, the gentle flapping that represented clothes drying on a clothesline at home transforms into ragged linens flapping on a macabre scarecrow as you get closer.

There are many such transformations as Rae travels further and further away from home. Some of them change into more menacing obstacles like the cars zipping down a road, but you’re never really in any danger. The path you take is a very linear one, which can make for some frustrating explorations. Because you can never see very far ahead of you, you’ll find yourself searching for a way forward, but stone fences, trees, bushes, angry crows, and dogs will arise out of the white mists to block your way. Your goal is to find your way through what is essentially a game-long labyrinth. And if you end up at a dead end far away from your goal, you must slowly, oh so very slowly, backtrack Rae to find another route.

There was a point toward the end of the game where I thought for sure that I had trod over the very same ground and must have made a mistake. I restarted the chapter only to realize that even though the scenes seemed very similar it was actually a different chapter, which made it maddening to have to replay given Rae’s painfully slow walking speed. At times there is a path that you can see just beneath Rae’s purple galoshes, but the game will often pull you off that track by presenting sounds just off to your left or right that you want to explore. Wandering can be rewarded with charming scenes, like chickens clucking and moving around a farm pen, or slightly ominous ones like an abandoned Ferris wheel that hints at happier times in the past. 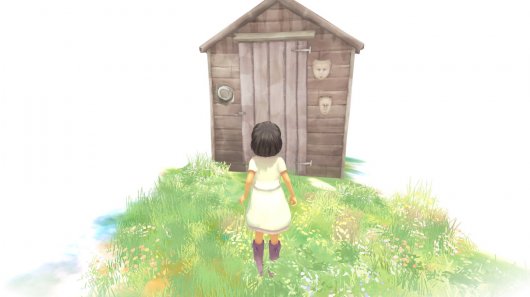 Danger in Rae’s world is often presented as a wall of dark smoke, thick and impenetrable. The smoke can represent a busy road with cars blistering past or a menacing, growling dog that won’t let you move forward. If I’m repeating the dog motif, it’s because one of the drawbacks to this relatively short game (it took me about three hours of walking to finish the story) is the repetitiveness of some of the obstacles Rae must overcome. On every corner there seems to be a growling dog or a murder of crows. What begins as a pleasant mechanic of familiar sounds materializing into unfamiliar dangers becomes banal when the same obstacles are repeated.

The world beyond Rae’s house has garbage-strewn streets, busy intersections, and dangers around every corner. There are very few people Rae will meet, and most of them are adults busily going about their day, walking their dogs or mowing their lawns. Rae does encounter a young girl, Lily, whom she befriends, but for the most part her explorations are of a lonely world filled with sometimes-comforting sounds but generally unfamiliar experiences. As she progresses, she’ll eventually discover things that she can smell, such as the odor of fish sitting outside a store or the fresh aroma of baked bread. I describe the scent as fresh, but I actually have no idea how the objects smell, of course. I can only tell you how they seem to appear to Rae. Just as objects can change appearance as you move closer and hear their sounds more distinctly, some objects emit a “smell” by displaying a different color, such as a crate of fish having yellow-colored waves wafting from it. 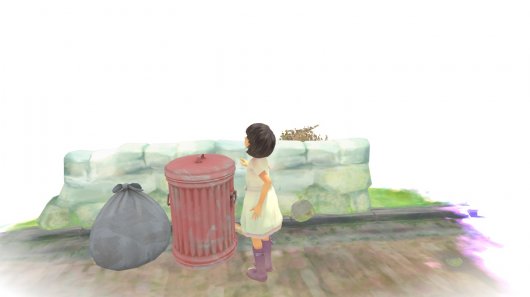 Throughout her adventure, Rae feels loneliness, a sense of wonder, and finally an appreciation for a sense of home. This journey involves delicately rendered scenes of loss and friendship that truly moved me. What we experience in trying to visualize through Rae’s senses continually points to the limitations of prioritizing sight, especially in a video game medium that places so much importance on how things look. It was frustrating to only be able to see things a few steps in front of me, and that frustration doubled when I realized that not being able to see far ahead didn’t allow me to plan my way forward. But I was also motivated to explore much more of the world around Rae because the way forward wasn’t planned out in advance. Even as the limitations discouraged me, the act of slowly revealing the environment made me appreciate more the simple beauties to be found.

The game makes wonderful use of sound, subverting expectations of what Rae will eventually see based on the noises objects emit. There were times, however, when I felt a little too much liberty was taken with the details created from the scant input provided. When Rae smelled the sweet scent of flowers alongside a road, how could she also have imagined the empty flowerpots beside them? Was I seeing things as they really were, or simply as Rae remembered them to be before she lost her sight? Does it even matter – is imagination every bit as “real” for a blind person as the actual objects if they can’t ever be seen? Is this what it means to see the world “beyond eyes”?

I found this game a very slow-paced but interesting meditation on how I experience beauty, and how I still rely on appearances to tell me how “beautiful” something is. But it is more than just that: it is also an exploration of loneliness, friendship, and memory that can be frustrating at times, and inspiring at others. Beyond Eyes is not a puzzle-filled game filled with player interaction or even what we traditionally consider “fun”, but it is worth exploring to see the different ways that this visual medium can lead you through imagined worlds.

Beyond Eyes is available at:

GAME INFO Beyond Eyes is an adventure game by Tiger & Squid released in 2015 for Mac, PC and Xbox One. It has a Stylized art style, presented in Realtime 3D and is played in a Third-Person perspective.