In 1959, nine college students went missing while hiking in the Kholat mountain region in the northern Ural mountains in Russia. When authorities mounted search and rescue missions, their frozen bodies were found, one after another, suffering from mysterious injuries. Starting at their abandoned campsite, from which the group seems to have fled in a panic, tearing through their tent in various states of undress in their haste to escape… something, would-be rescuers followed their trail into the nearby woods, the hikers’ mysteriously battered corpses leading the way like breadcrumbs. No acceptable explanation has ever been found for this bizarre flight into certain doom, which today is known as the Dyatlov Pass incident.

It’s easy to understand why Polish developer IMGN.PRO were drawn to such an enticing scenario as the basis for their horror-themed exploration game Kholat. Brimming with paranormal potential, the Dyatlov Pass incident offers the perfect combination of supernatural mystery, a pinch of paranoia, and an extremely hostile terrain as the backdrop for the game’s thrills and chills. Players assume the role of an investigator who travels to the region shortly after the students’ disappearance to retrace their steps and unearth the truth behind the tragedy.

The good news is that Kholat nails its setting: the atmosphere is innately creepy, the sound design is quite brilliant, and – should you have a machine capable of running it – it looks like a million bucks. No splotchy textures or bland environments hidden by utter blackness here. The game revels in showing you its beautiful bleakness, making you truly feel like a fish out of water in its hazardous white wastes and dank caves. It would have been easy to capitalize on the inherent repetitiveness of snow-covered rocks and trees, but the paths and winding trails you’ll traverse have been well thought out, and lots of little personal touches keep it from getting samey. As you set out from the train station in the nearby town, the deserted buildings and white-powdered streets are a sight to behold. Their quiet gentleness belies the terrifying moments soon to come when you go from seeker to prey – something is out there, and it’s just replaced you at the top of the food chain. One of my favorite moments occurred as I approached a snow-covered mountainside, realizing with a start that the entire massive wall consisted of giant skulls carved into the side of the rock, like some morbid Mount Rushmore. 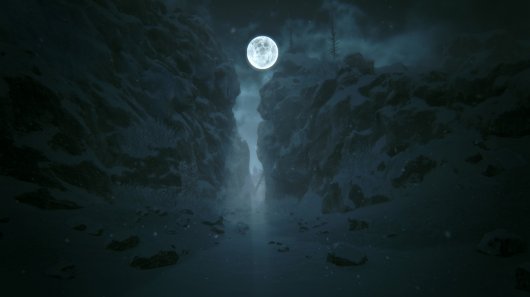 The potentially bad news is that Kholat will certainly not be for everyone. Gameplay is restricted to walking, sometimes running (though surprisingly never jumping or climbing) through the environment, picking up the occasional journal page left by the doomed students, contending with a monstrosity who sometimes gives chase, poring over a near-useless map, and visiting specific locales that trigger events or narrative voice-overs to move the (sadly middling) narrative along. Puzzles, items, characters to interact with, things to do – in short, gameplay fare most gamers have come to expect from their adventures – are entirely absent. Those who have played Slender or Outlast will have some idea of what to expect.

Kholat’s environment is massive, and you could easily spend hours getting lost in its twists and turns without ever seeing the same place twice. The game is also entirely non-linear, and you can explore areas in any order, or double back as often as you’d like and crisscross the region wildly. A map is provided from the very moment you delve into the game proper (after a brief introductory section), and rightly so with the sprawling terrain awaiting you. But you can easily be forgiven for ditching it in favor of haphazard exploration; the map is quite difficult to make heads or tails of, and often not very helpful. For one, it doesn’t actually indicate your position, which is kind of a vital component for navigation, although dedicated cartographers will eventually get enough of a sense of the world to make educated guesses as to their general location. A fast travel feature is available once you’ve discovered a few base camps to travel between, though I found no reason to use it, as there is rarely any impetus to revisit sites already discovered.

As you roam about, you’ll find that Kholat is a master of restraint and the building of suspense. Instead of jump scares and blackness, Kholat’s developers keep you constantly on the edge of your chair, anticipating some thing on your heels, expecting to have to run for your life at any moment. The game walks a fine line by not putting you in mortal peril every second of every minute. I actually only encountered the creature a handful of times, and even then, escaping proved a viable alternative, unless I’d gotten too close to it. That’s good, because there is nothing you can do to fight back. If you are forced to flee, you’re allowed short bursts of speed to run briefly, though your constitution is impressively weak: after dashing for seven or eight seconds, your vision gets blurry, and you’re reduced to a slower-than-normal crawl while you regain your breath. But in between these rare encounters, my imagination did the trick all on its own. The environmental perils – rockslides, gaping chasms, spike pits – sent me back to the most recent checkpoint (the most recent camp site visited or journal page collected) much more often than an enemy. 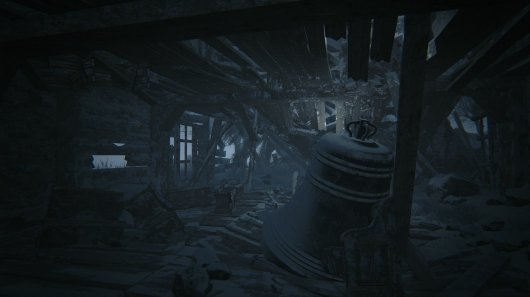 This sense of impending doom is largely due to the brilliant sound design. At almost all times, you find yourself assailed by howling winds, screeching around the granite mountainsides and bellowing toward you across the frozen ground. By itself, Kholat’s snowstorm sets one hell of a frightening stage for what’s to come. When combined with the gnarled, twisting creak of pines and echoed scuttling from deep within caves and grottos, it’s hard to ever feel truly safe and at ease. The distant howl of a wolf, followed mere seconds later by a closer, deeper howl – perhaps it’s another wolf, more likely something else. Such elements offer true testament to Kholat’s flawless soundscape. The same care extends to the music, what little there is of it. Quality was clearly more important to the designers than quantity: A wordless, beautifully melancholy melody, like a softly hummed lullaby, accompanies you in the game’s opening moments as you leave the safety of town behind. As houses and streets give way to snow-crowned wilderness, the song fades and is replaced by a sinister, foreboding tune.

Of course, as great as the visuals, audio, and atmosphere are, they’re ultimately just window dressing that accentuates the narrative. Unfortunately, when Kholat falters, it does so in a big way. With such a rich starting point as the Dyatlov Pass incident, the sky really could have been the limit to where the story goes. But as you collect journal pages, a rather limited tale about paranormal research and clichéd government cover-up is revealed. It’s not that it is a bad story per se, but it feels much too pedestrian in the end, and fails to really distinguish itself. The fact that these pages are inexplicably hidden all over the mountainside as optional collectibles that are in some cases quite difficult to find means that most players will never even get the full story. Sean Bean provides voice-over for the character you’re ultimately chasing after, while a separate narrator handles the opening cinematic, but the writing is so stilted that even his recognizable tones fail to punch it up. 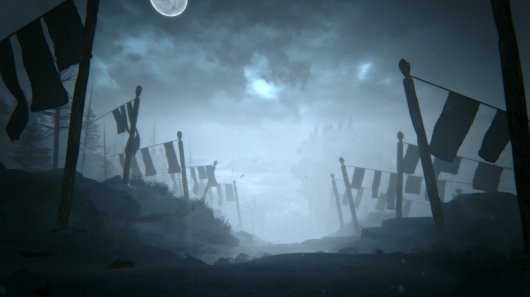 There are a number of other, smaller grievances to address. The graphical capability needed to enjoy the game as it was intended could be a substantial deal breaker for some. Lowering the resolution made things run a bit smoother for me, but also made it impossible to read the blurry text of the journal pages I picked up. I also experienced several areas where the game crashed due to the demanding hardware requirements. I didn’t encounter an excess of other bugs, though I did fall through the world and had to reset once.

Overall, Kholat is a noteworthy game in many aspects, and certainly a sterling first effort by a fledgling developer. Visually and aurally, there is nothing separating it from big-budget AAA titles; in fact, it handles the psychology behind being scared better than most of its contemporaries. But it also has its shortcomings, not the least of which are its lack of any real gameplay, a trite narrative that keeps it from picking up a full head of steam, and its substantial burden on your hardware to run at full capacity. In the end, it’s great to see a fresh idea for the horror genre, one that practically begged to be taken out of local legend and translated into an interactive format, and if IMGN.PRO can learn from their rookie misfires here, I can’t wait to see where this studio takes us in the future.

Particularly for a first-time developer, Kholat is a well-done attempt at a horror game, though one that is nonetheless marred by a couple of shortcomings. In terms of atmosphere, it absolutely nails the chilling setting it goes for, but provides little gameplay and only a lackluster story to accompany it.

GAME INFO Kholat is an adventure game by IMGN.PRO released in 2015 for Mac, PC, PlayStation 4, Switch and Xbox One. It has a Illustrated realism style, presented in Realtime 3D and is played in a First-Person perspective. You can download Kholat from: We get a small commission from any game you buy through these links.
The Good:
The Bad:
The Good:
The Bad:

What our readers think of Kholat