We get a small commission from any books sold.
All Bitmap Books
Written by
Drummond Doroski — July 17, 2013

Have you ever had one of those nights that you spend watching TV and wishing you were being just a little more productive with your time? This is more or less the premise of Tipping Point, where you, the silent protagonist, fall asleep watching television but wake up a little later to watch a bird fly out of the screen carrying a pocket watch with a mysterious note inside asking for help. It isn’t entirely clear who the note is from or what kind of help is required, but what sort of adventure game hero would you be if you didn’t jump into your TV in search of answers? As you'll soon discover, while some unique puzzles and beautiful environments await you, clear answers and a coherent plot remain somewhat elusive throughout your journey.

It’s hard to say too much more about the plot of Tipping Point, as the game clocks in at only a couple of hours at best. Suffice it to say that you eventually track down the author of the note and do your best to help resolve a family conflict involving their creation of “satellite travel”, an invention that seems to allow people to travel anywhere on Earth, or even beyond. In a game this short, it’s hard to imagine that the story could lose focus, but it quickly become convoluted. One character's suspicion towards another is never fully explained, and the other character’s actions are never fully explored. There's a comment made at one point about somebody else modifying a device, but who did this, how, and why are never revealed and seem to be simply forgotten after that. There’s also a plot twist that emerges towards the end of the game that seems to come somewhat out of left field.

One of the obstacles to connecting with the two characters is the lack of voice acting. This confused me a little, as the game has a voiced segment towards the beginning when you make a phone call, and both the sound quality and brief performance are excellent. It's strange to have this phone call be fully voiced, yet have the central characters of the story communicate through text. I’m sure the designer had good reason for making this choice, but it does make the only characters in the game far less relatable and interesting. 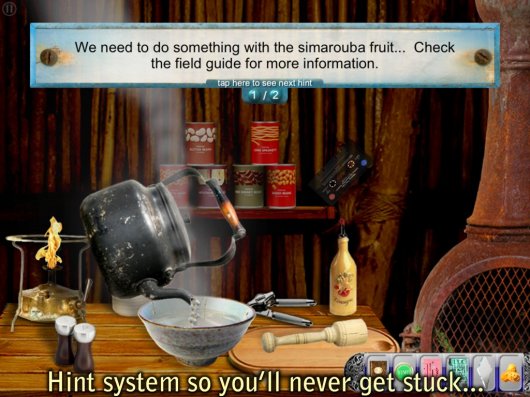 While the story gets confusing, the journey itself is generally quite enjoyable. The graphics are primarily touched-up photographs with some computer-animated objects and animals added. A static shot of a jungle, for example, is given some life with some CG plants moving in the wind and the occasional group of birds flying by. The sound effects are quite abundant and also contribute a great deal to bringing the world to life. Crashing waves on a beach and the sounds of machinery on a space station all add to the diverse atmosphere. There’s also the occasional music track (composed by the game designer himself) which are quite soothing and pleasant to listen to, but these appear infrequently.

On the iPad, Tipping Point's controls are fairly intuitive. Each screen has certain objects or hotspots that can be interacted with. Tapping a collectable object will add it to your inventory; tapping a button will press it. Holding your finger on the pad and moving it around will manipulate objects that can’t be picked up, like a fishing pole attached to a bridge. Inventory items appear in the lower right hand corner of the screen, and can either be tapped to examine closer (the object enlarges to fill more of the screen) or held and moved over an appropriate spot in the environment, where it will glow if usable. Sometimes tapping will do something irrelevant but fun, such as making birds at the beach hop in response. Exit arrows can be found at the edges of screens, and tapping on them will move you to the location in that direction. A pause button, so faint it’s almost invisible at times, is in the upper right hand corner of the screen, and allows you to exit the game or access the hint system.

Although it began life as a free online Flash game before being revamped and expanded for commercial release, the conversion to iPad is one of the best things about Tipping Point, as its design makes the most of the touchscreen interface. You change channels on your TV by pressing buttons on a close-up image of the remote. You search a crate for hidden items by pressing on packing peanuts to move them out of the way. You coax an animal out of your way by holding something it wants over its head. True, these could be done with a mouse interface as well, but they work much better and feel more natural with the touchscreen. 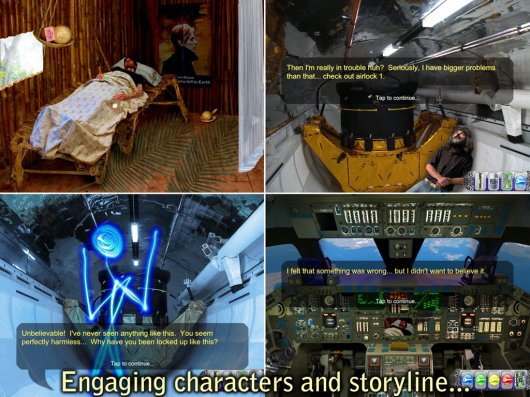 One of the problems with the interface is that there is no hotspot finder. This becomes an issue at times, because the photographic nature of the locations make everything look just as important as everything else. There were plenty of occasions I found myself clicking hard on objects because they looked useful and I thought they simply must be inventory objects. Other times I ran into the opposite problem, such as when I couldn’t solve a puzzle because I didn’t realize I needed to tap a plant on the far right of the screen. As every identical-looking plant I had tapped up to that point had been unresponsive, I naturally assumed this one would be as well. There was also one hidden compartment in an area that looked so much like the rest of the screen that it took me forever to find it, even after I accessed the hint system and was told exactly where it was. This type of situation came up frequently and became very frustrating over time.

Fortunately, the hint system is always there to help you if you get stuck, and does a fairly good job at giving you gradually more insightful hints to help you with your current puzzle. It even forces you to wait at least twenty seconds between each hint to encourage you to try the puzzle again before getting another clue, though this can be annoying if the hint it’s just given you is an aspect of the puzzle you’ve already figured out. 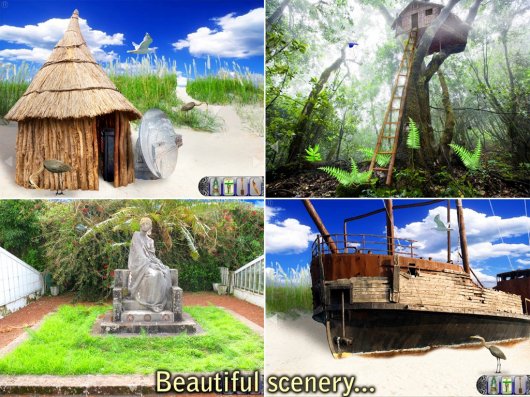 Most of the puzzles involve finding the right inventory item for the task at hand, but some of them can get quite creative, and later in the game there are some excellent standalone logic puzzles, such as when you have to open an airlock by programming a rocket to put a key in a lock. There are also some neat environmental puzzles, like adjusting that fishing pole to the right angle before casting the line and hoping you hook a brass pot at the bottom of the river. It’s at these moments when the game truly shines and becomes fun.

Overall, Tipping Point is an odd little game that suffers from some frustrating pixel hunting and a convoluted story, but benefits from the occasional fun puzzle and beautiful environments, made even more enjoyable by the abundance of excellent sound effects. The game was entirely crafted by one person, Dan Russell-Pinson, which is an impressive feat in and of itself. And while it may have the occasional annoyance or two, the game’s hint system is always there to get you back on your feet if need be. While it only clocks in at a couple hours of play time, it only costs two bucks at the App Store to even things out, and an hour of entertainment per dollar is a hard price to beat these days. The game isn't without its problems, but if you own an iPad and were planning on staying at home and watching TV tonight, consider traveling through it instead.

Tipping Point is an odd game with a handful of frustrations, but there are enough positive aspects to justify its almost negligible price of iPad admission.

GAME INFO Tipping Point is an adventure game by Dan Russell-Pinson released in 2013 for iPad and Mac. It has a Photographic style, presented in Slideshow and is played in a First-Person perspective.

What our readers think of Tipping Point