Tony Tough and the Night of the Roasted Moths review

The debate continues to rage regarding how best to push the adventure gaming genre into the new millenium. Many are saying that the only way for adventures to "catch up" with the appeal of the more mainstream genres is to innovate, to brainstorm brilliant new things that adventures can do.

Maybe, though, the answer is just taking the things that adventures did before, and doing them even better. Certainly you'll be hard-pressed to find a better argument for that idea than Tony Tough and the Night of Roasted Moths.

The second adventure published by Got Game Entertainment is developed by Prograph Research, a small Italian company that made the decision to fly in the face of innovation and infuse their project with a stellar plot, excellent humor, and a massive dose of energy and imagination instead. 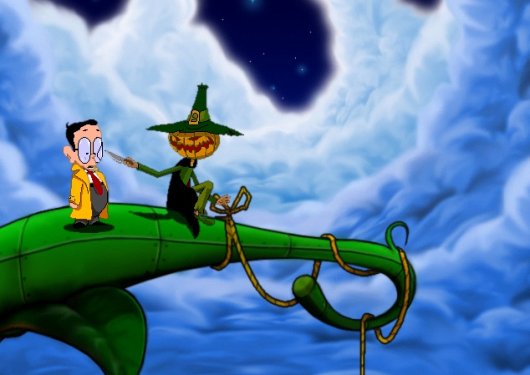 The game takes place Halloween night, as our hero Tony Tough (a diminutive, insecure, brainy little private eye with huge glasses, high pants, and the ultimate geek voice) is preparing to set out on a case involving a series of petty candy thefts.

After a short prologue, Tony ends up in Halloween Park, a demented carnival where the remainder of the game takes place. His beloved dog Pantagruel has been kidnapped by the evil Jack O'Lantern, a villain who just may have suspicious ties to Tony's past! The park is huge, filled with all kinds of nifty carnival attractions and fascinatingly bizarre people. It would be easy to get lost in its expanse, but the game equips you with a map that, besides helping you keep your bearings, gives you instant travel to any area of the park.

Tony Tough wears the influence of Day of the Tentacle and Sam & Max Hit the Road on its sleeves, borrowing heavily from each, even including a purple tentacle in the park's souvenir shop. The cartoonish style of graphics is perfect, and each area and character is drawn with imagination and life. Every part of the game is just gorgeous to look at; nothing is ever dull or bland. 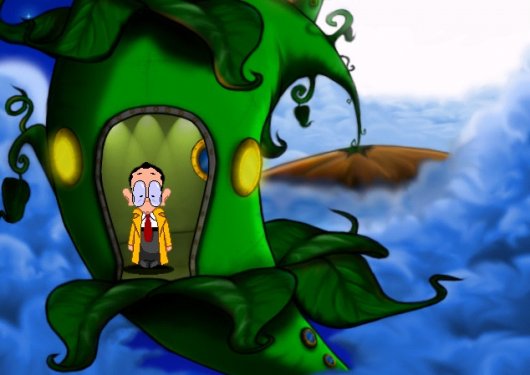 Another very strong point of the game is the voice acting. AudioGodz provided the voices, and they are all ideal. Particularly amusing is the Urkelesque (woe be unto you if you do not get the reference) geekiness of Tony himself, who makes Bernard from Day of the Tentacle sound remarkably cool. The other characters all have voices that lend themselves fully to their stereotype: the world-domination villain, the annoying nag housekeeper, the muscle-bound strongman, the angry pirate, etc. There is not one voice that I would recast.

The interface is reminiscent of Full Throttle; right-clicking on an object brings up a window allowing you to choose whether to Use, Take, Talk, or Examine. An amusing fifth option will be added near the end, but its use is not necessary to complete the game.

Tony Tough offers two modes of play: Beginner and Walkthrough. Okay, so that's not what the game calls it, but I would like to meet the gamer who can get through the Advanced mode without resorting frequently to a hint guide. The puzzles are quite absurd at times, involving multiple combinations of inventory items that 90% of us would never envision. During the course of the game, you will go through more than 40 inventory items, and at one point near the middle of the game I had 23 in my possession at one time. Difficult puzzles are good, and absurd puzzles have their place, but it just reaches a point of frustration in Advanced mode. The developers were very smart to offer a Beginner mode, which I highly recommend for those with low self-esteem. 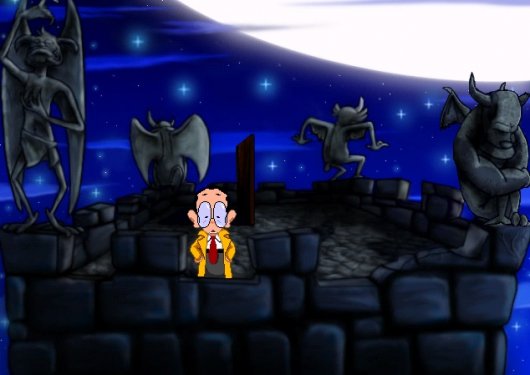 The amusing thing is that the game seems to be aware of this, and in fact included among Tony's stock "can't use X with Y" responses (which are impressively extensive) is the statement "Using everything with everything won't get you far in a video adventure game." Tony Tough is littered with remarks like that, very self-aware and cynical. The entire game is extremely well-written with much of the dialogue seemingly inspired by Max the Rabbit, filled with random references to obscure diseases and other strange and absurd observations.

I stopped short of giving Tony Tough a 4.5 not for any specific fault of the game, but because the sum total of all the excellent parts somehow does not add up to "classic." There's just something missing. Maybe it's the slighly unsatisfying ending, maybe the occasional difficulty in navigating through the dialogue tree. But in any case, Tony Tough is gorgeous, entertaining, frequently hilarious, and a worthy heir to the LucasArts mantle of quality cartoon adventures.

There is abundant room for a sequel, an idea which I fully support. All that remains to be seen is if sales will warrant it. Those looking for a brilliant new interface or innovative storytelling device should look elsewhere; those who cherish tradition and pine for the glory days of adventures will be thrilled with Tony Tough, as traditional an adventure as we'll probably see for a while. Here is proof that tradition still may be the best idea.

Fans of the classic cartoon adventures will find their fix with this brilliantly traditional adventure.

GAME INFO Tony Tough and the Night of the Roasted Moths is an adventure game by Prograph released in 2002 for PC. It has a Comic cartoon style and is played in a Third-Person perspective.