EcoQuest: The Search for Cetus review 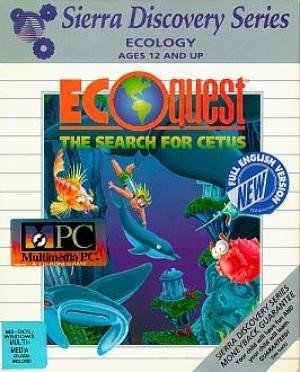 We get a small commission from any books sold.
All Bitmap Books
Written by
Andrea Morstabilini — April 24, 2009

Even before the term “edutainment” was first coined in 1975, the concept of education through entertainment had always been a controversial one. Some detractors say that joining entertainment and culture inevitably diminishes the latter, whilst other sceptics claim that such a practice can only lead to a mixed experience, unsatisfactory both in terms of education and amusement. At the beginning of the ‘90s, Sierra tried the road of edutainment with its “Discovery Series”, launched in 1991 with EcoQuest: The Search for Cetus, an adventure game aimed at a young audience. When it was originally released, it came with a booklet written by Michael O’Brian, entitled “I helped save the Earth – 55 fun ways kids can make a world of difference”, with practical suggestions and ecological advice for children like “be careful watering the lawn” or “don’t buy drinks in plastic containers”. But while it’s true that children are the primary target of the game, as it’s considerably easier than other Sierra products, it’s also true that, even today, EcoQuest is just as suitable for adults and experienced adventurers in need of a breezy, relaxing vacation.

Providing a key foundation for the game, the plot is solid and doesn’t let the educational aspects stifle the pacing of the story. EcoQuest casts the player in the role of young Adam Greene, the only son of a biological researcher and ecologist. One busy day, Adam is left alone in the house/laboratory with the duty of attending to an oil-coated seagull and a dolphin, recently captured in a fishing net and now in need of recovery. Adam gently treats the gull with a cleaning solution and then, being the responsible kid that he is, follows the instructions left by his father on how to approach a dolphin. He feeds it, plays and swims with it, and finally, much to his astonishment, talks to it.

Yes, Delphineus, although he isn’t very comfortable with it, can speak the human tongue and, convinced of Adam’s kindness, asks him to be freed. He is on an important mission to find what happened to Cetus, the king of his homeland Eluria. Cetus has been missing for weeks and without his guidance, Eluria’s citizens are at the mercy of maritime predators, and the net incident has delayed the quest severely. What is worse, now the greatest peril of all threatens to destroy not only Eluria but all undersea life: oil, the fruit of man’s recklessness. Trying to make a difference, Adam offers his help to Delphineus and, thanks to his mastery of scuba diving, joins him in the underwater journey toward Eluria. 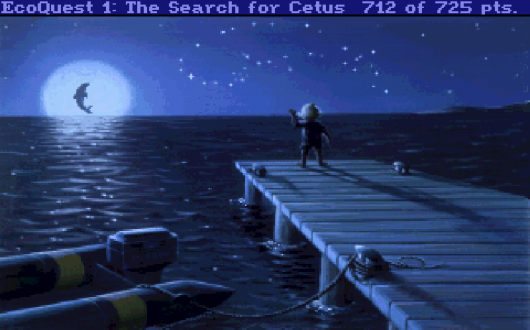 Once in the city, the real game starts; the early phases being a sort of tutorial for young, inexperienced players. From that moment on, the pacing of the story becomes snappier and the challenges more engaging. Adam finds out that Eluria is not only threatened by the viscous oil but is also being terrorized by Flesh-Eater, a once peaceful manta inexplicably turned into a fearsome monster. Inside an overgrown, tumbledown temple, Adam seeks the wise counsel of the Oracle, who reveals an ancient prophecy about a human child, the only one who can save Eluria from sure destruction. Aided by the faithful Delphineus, Adam must fulfil the prophecy, return the lost king to his throne and free the sea from the harm of mankind. Confronting greedy octopuses and voracious fishes, Adam must make his way through abandoned offshore rigs and dark, ghostly caves on the way to a very tender, moving finale.

Whilst the plot is never groundbreaking or original, it offers enough incentive to complete the game and find out what happened to Cetus, thanks mainly to the brilliant writing, which is always fitting and never redundant when dealing with environmental issues. The game was written and designed by Gano Haine and none other than Jane Jensen, and the quality is really top-notch. The care put into every aspect of the game – from the wondrous descriptions to the witty dialogue and thought-provoking remarks on ecological risks of mindless progress – ensures that EcoQuest is both entertaining and educational. Moreover, the writers succeeded in filling Adam’s adventure with a heart-warming sense of wonder toward nature’s mysteries and marvels that is captivating not only for children, but also for adults.

A good example of this achievement is the game’s characters. Adam is a likeable, believable protagonist and Delphineus is an ideal sidekick, always providing interesting information about the undersea life, together with amusing wisecracks and puns. Eluria’s citizens are a rare example of naïve archetypes imbued with a vivid spark of personality: from Erraneous the Turtle, the pernickety teacher who keeps an English flag above his bed and speaks only in formal British, to Epidermis, the reggae angelfish who covers his apartment walls with posters of famous singers, the characters preserve the innocence suitable for children while constantly providing a more subtle, irreverent humour that will please older players. The dialogue, although not requiring any actual choice from the player, is a pleasure to read: for example, it’s impossible not to laugh at the pompous stiffness of Superfluous, the shy hermit crab Senator of Eluria, or be touched by the lobster Demeter, Guardian of the Royal Garden who powerlessly watches the decline of his old, little world, destroyed by pollution and toxic wastes. 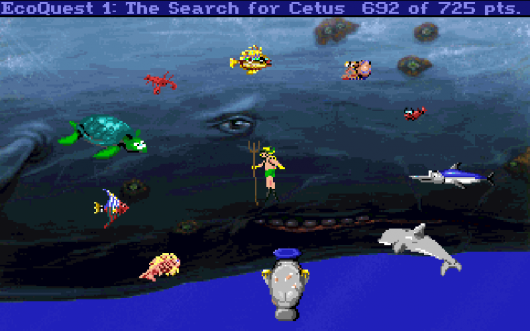 In this regard, the cartoonish graphics do an amazing job depicting a decaying environment, punctuated with notched Greek statues and crumbling temples, spoiled by rubbish and yet luxuriant and bright. Where the taint of men hasn’t arrived, there are plenty of fish swimming in shoal, blooming plants and weeds, colourful urchins, entangled algae and so on. The animations, given the age of the game, are incredibly smooth and believable, both above and under the surface of the sea. Unfortunately, the sound department’s quality doesn’t match the high standard of the graphics, as the musical score from Chris Braymen is quite repetitive, never memorable and sometimes even annoying. The one notable exception is the main theme, which is quite compelling and catchy. The sound effects do a better job, but they are very sparse and often overwhelmed by the music itself. It’s worth mentioning that Sierra also produced a full-speech CD version of the game, with a cast of professional actors, but this review is based on the original release.

Even apart from the CD release, there are two distinct versions of EcoQuest: The Search for Cetus, both of them released on disks. The first one uses Sierra’s standard engine of the time, SCI1, whilst the second, dated 1992, uses SCI1.1, which basically adds scaling sprites. Aside from this little graphic improvement, the two versions are identical and present the same traditional point-and-click, icon-driven interface. The only innovation is a Recycle icon, through which Adam helps the world to be a better place by cleaning up all the trash he finds along his way. The icon serves its educational purpose without being intrusive, but it’s pretty useless in terms of gameplay and is scarcely used for puzzles, mainly allowing the player to achieve the full score. 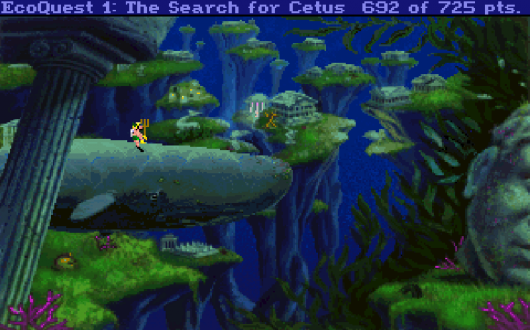 If trying to recycle a useful item, the game simply doesn’t allow it and Adam immediately picks up the object, explaining how it may come in handy later. This means that, unlike other Sierra adventures of the same period, there aren’t any nasty dead ends. Such guidance also helps make EcoQuest a lot easier than its adult-targeted counterparts, because the game is extremely linear and sometimes the player is told not only what to do but also precisely how to do it. At the very beginning of the game, for example, Adam has to make friends with the injured dolphin and all the player has to do is simply read the chalkboard and then perform the actions in the given order. As the story proceeds, the challenges become more interesting, but players should never expect a brain-teasing experience. The game was designed for kids, after all, so the difficulty ranges between low and merely average. Fortunately, the puzzles – although easy and straightforward – are always well-designed and cleverly implemented. Moreover, they show a good variety, from the classic inventory-based fetch puzzles to logic types like jigsaw puzzles, rotating columns and riddles.

Considering that EcoQuest is a game clearly aimed at a young audience, it does an amazing job at being both cleverly educational and amusing for everyone to play. This is a perfect game to play as a whole family, with parents aiding their children when they get stuck while entertaining themselves with the cunning wisecracks and more subtle humour. However, the extremely linear gameplay can’t help but feel a little strained for an experienced adventurer, who will probably breeze through the six or seven hours the game has to offer without encountering any real challenge. If you are searching for an adventure that will test your intuition and wits, this isn’t the game for you, but if you need a relaxing gaming experience in between more difficult adventures, EcoQuest: The Search for Cetus would be an ideal vacation, offering a journey that’s both entertaining and thought-provoking.

EcoQuest is a rare example of well-done edutainment: it’s a pleasure to play and does a great job in creating awareness of environmental issues. Suitable not only for children but also for adventurers in need of a more relaxing gaming experience.

GAME INFO EcoQuest: The Search for Cetus is an adventure game by Sierra On-Line released in 1991 for PC. It has a Stylized art style and is played in a Third-Person perspective.

What our readers think of EcoQuest: The Search for Cetus