In a promising early interview with Adventure Gamers, the business development director of Autumn Moon Entertainment once described all the effort that had already gone into the creation of A Vampyre Story as a "true labor of love." That interview was given in July of 2004; since that point the game has tripled its development lifespan while the company has weathered unexpected delays, funding struggles and publisher false starts before finally reaching the long-awaited point of release. Now A Vampyre Story, six years in the making, has at last arrived trailing all of the hype and anticipation, and it is everything it could have reasonably been expected to be: a very beautiful but certainly flawed debut adventure game.

A Vampyre Story is a cartoon comedic adventure which taps into the same dark vein of humor as Young Frankenstein, though drawing from the lore of bloodthirsty vampires and their undead life partners instead. In Draxsylvania circa 1895, one such creature of the night is Mona de Lafitte, our heroine who is a remarkably talented soprano with designs on being an opera star. Mona's life is thrown into a bit of domestic chaos when her vampire imprisoner Shrowdy von Kiefer meets an abrupt end and she resolves herself, along with her friendly shoulder-companion Froderick the bat, to set out for Paris and finally realize her dream of being a performing operatic sensation.

The bulk of Mona's quest involves getting out of the large castle in which she is now the primary resident. It's far from an isolated existence, though; the castle is filled with bizarre and occasionally grotesque supporting characters, including a snooty gargoyle guardian, a matronly iron maiden, and the vengeful ghost of Mona's ex. It's also filled, as you might expect, with plenty of items to pick up, combine, and use in creative, vampiric ways. All of the interaction with these characters and items takes place through a Full Throttle-esque interface--clicking on a character or item brings up a cross which allows you to interact with your eye, your hands, your mouth, or a "fly to" option. The game spells out your available interactions as you select each icon, and although it's generally a matter of Look At/Take/Talk To, the interface occasionally creates some amusing possibilities. The options are certainly plentiful; each room is filled with hotspots (which can be identified with a quick press of the TAB key) to look at and there is a great deal of effort that went into unique responses for many of them. 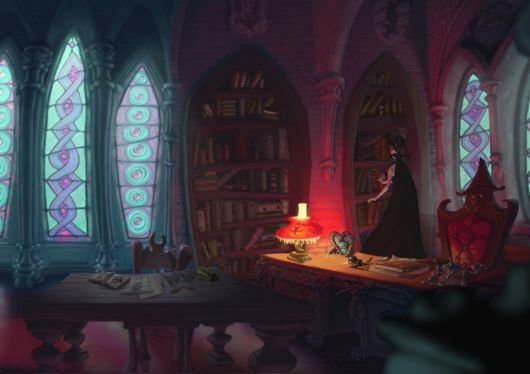 The game's creator, Bill Tiller, brings an impressive resume to Autumn Moon, with major art credits for The Curse of Monkey Island and The Dig, plus plenty of minor experience with other legendary LucasArts adventures. It is no surprise then that A Vampyre Story is a tremendously stylish and beautiful game which modernizes the Disney-style cartoon adventure to a new standard. The detail in the background is stunning and the character animation, particularly during dialogue sequences, can be very impressive. This sparkling graphical excellence, unfortunately, finds itself beset by occasional bizarre glitches--inventory items popping onto a background unexpectedly, walking animations clipping across the screen, and cutscenes that play twice in a row, which succeeded at confusing me greatly. These glitches are not extremely frequent, but when they do pop up they display a jarring lack of polish for a game that was in development for such a long time.

Tiller attempts to expand beyond his lauded artistic ability by sharing primary writing duties as well, with mixed results. A Vampyre Story is a comedy that blends many dark elements, but while it succeeds sometimes at being a funny game, the writing often seems to struggle with exactly what audience it wants to amuse. Trapped within the same dialogue sequence are Disney-level jokes clearly designed to appeal to a pre-teen audience and very adult-themed humor that can be surprisingly witty. This means there’s a little something for everyone, but it also results in jokes with adult content that pre-teens won't understand, and obvious kid jokes that adults will find annoying. I really have no problem at all with a game being designed for a younger generation (it certainly worked for the King's Quest games) and the writing is never really poor for what it seems to be attempting, but it's the occasional and confusing inconsistency that is troubling.

The uneven writing is largely handled well by the voice acting talent--the supporting actors are enthusiastic and convincing in their portrayal of the bizarre denizens of the game's world, complete with a variety of diverse and entertaining accents. Mona's sidekick, Froderick, eventually won me over with his lovable New York-wiseguy attitude, which portrays a genuine affection for the vampiress. Indeed, the voice acting works very well across nearly the entire game...with one violent exception: the hideously awful voice of Mona herself. She is insufferably shrill and whiny, reads nearly every line as a confused airhead, and most depressingly of all can not even maintain a convincing French accent for an entire line. One has to wonder how the actress was able to read her entire script, constantly swapping pronunciations of "zee" and "the" and similiar French-specific enunciations, without being corrected. The fact that the game's single biggest failing is the voice of the character who does most of the talking by far is really an unfortunate black mark. 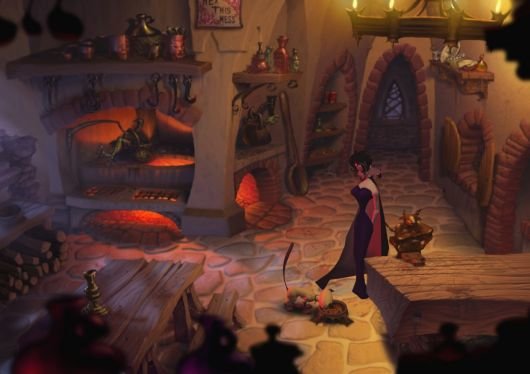 Interestingly enough, the audio department also speaks for the game's biggest success--the absolutely fantastic classical soundtrack, which frames every different area of the game with a unique theme that not only fits the tone of the area but generates a much stronger sense of enjoyment. I have played adventures in the last two years with both really bad soundtracks and almost no soundtrack to speak of, and it was immediately noticeable to me how much was added by the strength and creativity of the music here. It is on par with the Sam & Max series for a modern example of how a soundtrack should amplify an adventure game experience.

Because the game's environment is a relatively tight space (the entire castle setting where the majority of the game is spent is only 15 total screens, and the nearby town area is fairly confined as well), the progression of the story relies heavily on puzzles. The large, over-arching puzzles almost serve to break the game into chapters. There is always a specific task that is necessary to continue on in the game, which involves a list of sub-puzzles, which themselves sometimes are broken down into smaller bite-sized puzzles. There is a pretty strong balance of difficulty, and the game requires you to pay attention to the character conversations to pick up on information. There are many inventory puzzles, including some bizarre item combinations that take place--usually involving Froderick--but most make sense in retrospect, and the level of inventory is always relatively manageable so you don’t have to spend hours trying thirty items with thirty other items.

The game also introduces a very clever concept in the form of an "idea icon" in the inventory, which is the game's answer to the contention that characters shouldn't be able to simply carry around infinite amounts of inventory on their person. Instead, if you attempt to have Mona take a sword, for example, a sword-specific icon will be added to the inventory and upon using that icon when it becomes necessary, Mona will teleport back to the sword (as vampires do), grab it, and teleport back to use it where she's supposed to. Now, admittedly a cartoon adventure with a talking bat and an operatic vampiress may be an odd place to implement an additional measure of realism, but I admire the creativity of the idea. I also applaud the use of Froderick in many puzzles; his contributions as an ever-present inventory item are usually creative but sensible, and he is at least a decidedly helpful sidekick--no worries about a modern version of Cedric the owl. 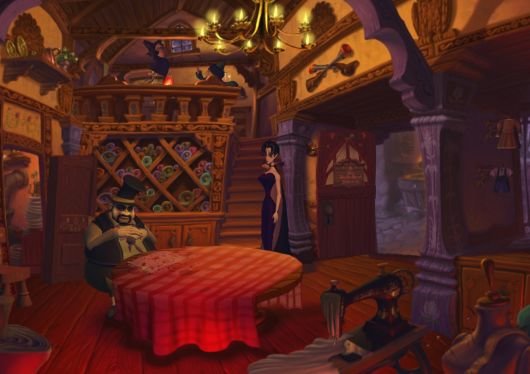 The challenge of the puzzles creates some inflation of the playing time, which may be a positive because this is far from a long game (as has been the communicated expectation since the design process began). Even with some "stuck time" on some of the harder puzzles, I think this is probably no more than a 10-hour experience for an experienced adventure gamer--which isn't alarmingly short, but definitely light on story dynamics. Overall, most gamers will probably be surprised at how the game ends before it really seems to be done.

Of course, that ending does come with a nearly direct promise of a sequel, and although a slightly tidier closure to the opening installment would have been preferable, I was happy to see that promise. A Vampyre Story has many elements that lead me to believe this developer has a lot of good things in store for it--clearly there is a great degree of technical competence in the areas of the visuals, the animation, the sound design, the relatively strong balance of the puzzles, and the creativity of the characters. Now, as Mona's story hopefully continues in a couple years, it will be up to Autumn Moon to demonstrate they can build on these strengths, focus the tone of the writing more, and avoid any major pitfalls (such as the voice of Mona, which is in itself the loss of an entire half-star of my score). It is tough to fulfill six years of expectations and hope, but ultimately I liked and occasionally admired A Vampyre Story--and can't wait to see the improvements that can be made by this developer the second time around.

It isn’t quite a triumphant cartoon adventure achievement, but it’s a promising debut adventure that is wonderful to look at and worth playing for most genre fans.

What our readers think of A Vampyre Story

I thought the soundtrack was nice. The graphics weren't bad for the time, although they definitely look dated today. There were plenty of puzzles. They seemed somewhat un-intuitive to me. But the vast majority of... Read the review »

~14 hours Title summarizes most of my thoughts, but this is a great re-vitalization of old school adventure games to fit the modern "pretty looking" age. Great puzzle mechanics, goofy and varied characters, okay storyline,... Read the review »

Superb gameplay, great artwork but some hit-and-miss humour in a simple and unfinished tale.

A Vampyre Story is a really good-looking adventure game with some amazing artwork by Bill Tiller (of Curse of Monkey Island fame). The master's hand in the artwork is clearly visible - his odd shapes... Read the review »