We get a small commission from any books sold.
All Bitmap Books
Written by
Berian Morgan Williams — August 19, 2004

In Cirque De Zale, you play an obnoxious, sarcastic young man named Alexander Zale who works at the circus as an "elephant-feces removal operative." One day, his life takes a turn for the surreal when he is transported to another dimension by a disgruntled magician. Upon arrival, Zale decides he likes the look of this new world (which is a quaint, fantasyesque affair), and decides to set up his very own circus - the Cirque De Zale of the title. In the game, we play as Alexander as he struggles to find and acquire his circus, along with the requisite staff.

The game shares a few similarities with the Monkey Island games, mainly the SCUMM-like interface and the excellent low-resolution graphics, which are reminiscent of the LucasArts greats without ever being derivative. There are also lots of animations, which add an extra touch of flair to an already beautiful game. 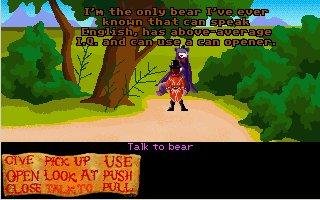 The game's strongest point is definitely its humour, which is sometimes subtle and occasionally laugh-out-loud hilarious. The conversations with the other characters are excellent, with Zale delivering some brilliant sarcastic put-downs, which reminded me of Simon from the Simon the Sorcerer games.

The puzzles are fairly simple, but the game as a whole is so charming that this won't bother anyone. Instead, it just eases the game's flow. The game is of a respectable length, but I was left wanting more because the humour and charm of the game are so enthralling. The game's conclusion leaves a definite opening for a sequel, and Kinoko (the game's author) has stated her intention to create a follow-up some day. 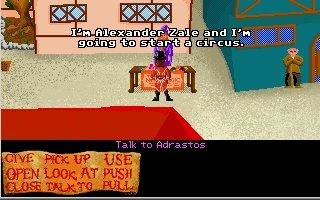 I would definitely recommend Cirque De Zale to anyone, most of all to adventure fans feeling nostalgic for the early LucasArts games. If you like humourous adventures, I think you'll love this. Saying it's the best amateur game by a 21-year-old female wouldn't be doing it justice--this is one of the best games of the year, period.

Cirque de Zale can be downloaded as freeware from Kinoko's website.

What our readers think of Cirque De Zale