Lure of the Temptress review

We get a small commission from any books sold.
All Bitmap Books
Written by
Claire Wood — July 23, 2004

Today, Revolution Software is a company at the forefront of adventure gaming, with their latest release (Broken Sword: The Sleeping Dragon) receiving critical acclaim. At a time when other companies have dubbed the genre stale and unprofitable, Charles Cecil and the Revolution team have pushed for originality and modernisation, combining traditional adventure elements with 3D graphics and direct character control. Speaking with Charles Cecil in November 2003, he commented on Revolution’s earlier releases, stating that, “though they had plenty of faults… the fact was that they had new ideas… We can’t compete with [games like] Final Fantasy, they spent $40 million… but what we are trying to do is innovate.” Innovative from the start, Revolution have certainly come a long way, as their humble beginnings in 1991, with Lure of the Temptress, shows.

Essentially, Lure is a third-person adventure staged in a fantasy setting, which focuses upon the timeless struggle between good and evil. The player is cast in the role of Diermot, a young peasant unwillingly swept up in the adventure when his wayward horse follows the king to an uprising. Outside the village of Turnvale, the king’s army encounters a vicious, inhuman horde known as the Skorl, commanded by the ambitious and powerful enchantress Selena. The king and his followers are brutally killed or maimed, while Diermot is knocked unconscious and awakens a prisoner in the Skorl’s dungeon. In classic fairytale style, this young hero must now escape, vanquish his enemies and rid Turnvale of the Temptress’ menace.

Lure of the Temptress is set in the thriving quasi-medieval village of Turnvale, rendered in VGA graphics reminiscent of Indiana Jones and the Last Crusade. The graphics look dated, even when considered in their original context and especially when blown up on modern 17” or 19” monitors. Although there is excellent detail in several locations, many gamers will experience an unnerving sense of déjà vu as they explore the village’s maze-like environment, with several of the backgrounds re-used in different locations. In contrast, the few cutscenes within the game are of a high quality, especially the introductory sequence in which a “comic book” style of layered stills, familiar to players of Gabriel Knight 1, is used. The freeware version of Lure doesn’t include music or sound effects, but this is compensated for by the witty, detailed descriptions of the objects and characters that Diermot encounters. Furthermore, Lure fortunately doesn’t suffer any of the usual technical problems associated with playing older games on newer systems, running smoothly and glitch free, even in Windows XP. 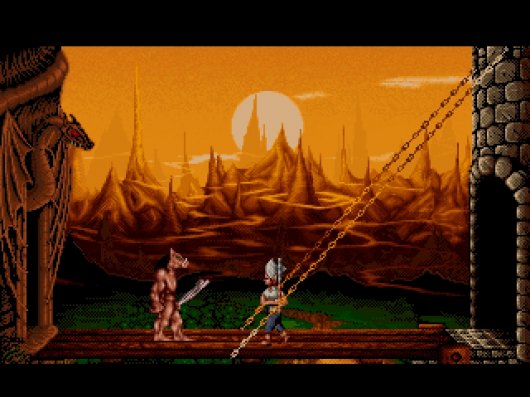 The interface differs crucially from the familiar SCUMM or SCI. In this instance, interaction with the gaming environment is achieved through a series of pop-up menus. Left-clicking on an object will provide a detailed description, while right-clicking opens a menu with a list of possible actions, such as “Get”, “Open”, “Pull” etc. Certain verbs such as “Give” open a second pop-up menu, with a list of inventory items. This interface is unobtrusive and easily mastered, with the varying list of verbs providing greater freedom than multipurpose umbrella verbs such as “Use”. Personally I enjoyed this facet of the game, though other gamers may find the seemingly infinite number of potential actions frustrating, especially because 95% of such actions are futile.

What is unique about Lure of the Temptress is the Virtual Theatre system, which endows the non-playable characters (NPC’s) with some limited artificial intelligence. Instead of remaining fixed in a single location, waiting for our hero to encounter them, the various inhabitants of Turnvale follow their own agenda, interacting with their fellow peasants, traversing the village or perhaps stopping off at the pub or market. Although the concept of Virtual Theatre is innovative, in practice it is simply irritating. Frequently I found myself trawling the backstreets of Turnvale to locate fugitive villagers. Even worse is bumping into NPC’s that you don’t wish to see, especially in the entrances and exits of rooms. Such encounters usually prompt an unwarranted amount of on-screen shuffling as the two characters attempt to move around one another. Fortunately the Virtual Theatre concept was refined and greatly improved by the time of Revolution’s second release, Beneath a Steel Sky, in 1994.

Diermot is aided on his quest by the dubiously named “Ratpouch” (it appears that no-one in Turnvale, including the similarly ridiculous “Morkus”, has ever heard of deed poll.) Not only is Ratpouch an aspiring jester with an unfortunate name and even more unfortunate dress sense, but he is also a “Helper” character in the game. Ratpouch can therefore be controlled using the “Tell” command, through which players can construct a complex set of instructions. The “Tell” command is another interesting idea and a great power trip, but for the majority of the time seemed a little superfluous. Why ask Ratpouch to do things I should easily have been able to do myself? At one point it is necessary to move some stone blocks. Diermot refuses on the pretext of “bruised and aching muscles” yet quite happily instructs Ratpouch, a young boy who has just been tortured on the rack, to do so. I soon lost sympathy however, when Ratpouch (despite seeming acquiescence and a cheery “Certainly, Sir”) pig-headedly failed for the umpteenth time to do my bidding. Perhaps I was being unfair asking him to pick up sewerage, but it’s the principle of the thing that counts, damn it! 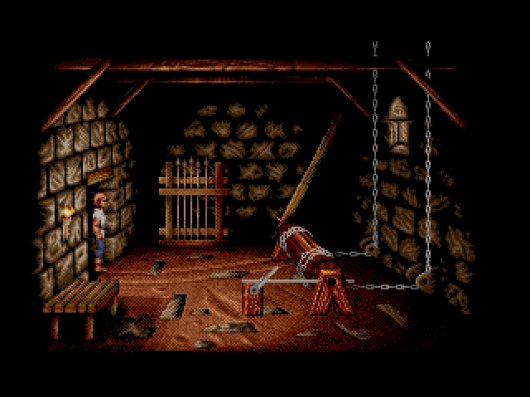 The puzzles in Lure are straightforward and highly logical in nature, and players can expect to experience between eight to ten hours of gameplay. The NPC’s usually provide hints on how to proceed, while at other times you’ll need to use inventory or delegate tasks to the “Helper” characters. On two occasions fighting is the only way to advance, with Diermot battling monsters. Fortunately these sequences are simple and mercifully short. Attack is achieved by left-clicking high, medium or low to make Diermot swing his axe, or right-clicking to block. Losing in these skirmishes will abruptly terminate your quest. Running into the Skorl guards may produce a similar effect, and you’ll need both cunning and a good sense of timing to overcome them.

The plot is awash with the standard fairytale clichés, but without the depth and complexity that games such as King’s Quest VI: Heir Today, Gone Tomorrow bring to the formula. Despite this, the NPC’s are a colourful and eccentric band, ranging from a dim-witted barbarian to a scandalous village gossip. Talking to these characters often produces sarcastic and witty responses, showing Revolution’s trademark brand of humour, which relieves otherwise tedious gameplay.

It is difficult to answer the question of whether this game is worth playing. Consideration prompts a hesitant “yes”, but not for the usual reasons. Lure of the Temptress is certainly the weakest game in the Revolution lineup, and you won’t find eye-popping graphics or a complex plot to coo over. Moreover, the gameplay can become tedious and repetitive, albeit interspersed with humour. However, because the company has now released this game as freeware, it is worth a second look. Lure is not a good game, but it is an innovative one, which marks out Revolution as a company prepared to push boundaries and take risks. Fans of the company’s later releases will be particularly interested to see the bits which don’t quite work in Lure carefully refined to become key components in the much beloved Beneath a Steel Sky and Broken Sword games. Revolution has evolved as the adventure genre needs to, and while on the metaphoric evolutionary scale, Lure of the Temptress is something of a stunted amoeba, it’s a game which budding palaeontologists with a spare afternoon will enjoy.

There are few alluring features in Lure of the Temptress, but its freeware status makes Revolution’s first offering worth a second look.

GAME INFO Lure of the Temptress is an adventure game by Revolution released in 1991 for Mac and PC. It has a Stylized art style, presented in 2D or 2.5D and is played in a Third-Person perspective. You can download Lure of the Temptress from: We get a small commission from any game you buy through these links.
The Good:
The Bad:
The Good:
The Bad:

What our readers think of Lure of the Temptress

2.5 stars out of 5
Average based on 6 ratings
Your rating