Aura: Fate of the Ages review

We get a small commission from any books sold.
All Bitmap Books
Written by
Kirk Latimer — July 28, 2004

I have recently caused a bit of controversy by prodding adventure game purists with the question: are all adventure games really adventure games? What I mean is, are all those games we classify in the adventure genre really similar enough to be classified together and evaluated on the same kind of “adventure game” criteria? Aura: Fate of the Ages has proven, beyond a doubt, that not all adventure games are about what we typically consider to be adventure. Sure, the game parades around as an adventure, but, believe me, the adventure is hollow at best, a shell intended to hold together the very meat of the game: sometimes sweet, sometimes sour puzzles. If I were to compare this “adventure game” to the best of the bunch, it would fail miserably. Why? Because there is no real adventure. But if I evaluated it by the same criteria as one would evaluate Pandora’s Box, or Jewels of the Oracle, I must say that Aura holds its ground. The game is a shallow pond of a story with deeply rooted, complex, and interwoven puzzles.

Streko-Graphics introduces us to the world of Aura with a rather eye-pleasing and visually captivating opening sequence. An ominous narrator booms in to describe how the fate of the world hangs in the balance because of a bunch of rings and a group of old guys, known as The Keepers. The first subtle hint that this game is not a real adventure-heavy experience is in the introduction of The Keepers. Who are they? Some elders who have powerful rings. Do we need to know more? Apparently, not in this game. All the same, I enjoyed the opening and smiled as I thought of the Lord of the Rings trilogy, three of my favorite movies.

I wondered who could possibly be the hero of this tale, the one to tame the rings. His name is Umang, an apprentice of sorts who just kind of gets thrown out into the wilderness and must travel to various worlds (ala Myst) in order to save them all from being obliterated. Well, you may be asking me at this point: how must we, as Umang, the otherworldly punk-rocker, save the world in this game? No, you do not fight off throngs of evil demons with precise crossbow action. No, you don’t sign treaties with your enemies. And no, you don’t develop a military strategy for conquering the evildoer. The task is far more brutal, far more imposing: you must solve puzzles, lots of them. 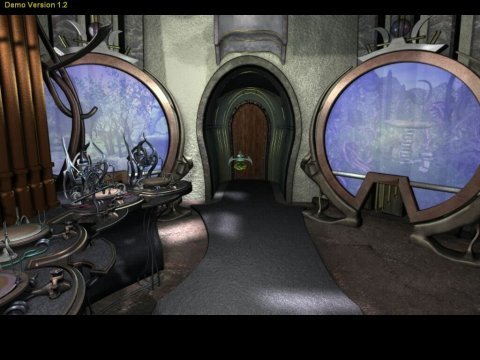 There is a lot I truly admire about this game’s “aura.” Graphically, it stands among the most visually striking first-person perspective games I have ever played. While watching the scenes roll by, I continually thought, “This is top-notch stuff.” As a matter of fact, I also thought, “The plot could be a simple excuse to string together a bunch of pretty pictures.” Hey, I’ve got to be honest, it made me want to dig in and begin chewing on the puzzles, no matter how difficult they seemed. Not even a completely obscure puzzle involving a machine, colors, rotating cylinders and planets could keep me from coming back to soak in the detail.

I feel I should make a very important comment at this point: I recently read a review of Myst III on a well-known and well-respected site. I was discouraged to see that Myst III earned the highest ranking graphically while Aura barely scraped by above failing. I clearly recognize that Myst III boasts photo-realistic two-dimensional graphics. They are worthy of praise. But make no mistake; though the character models may be a bit flat, Aura’s visuals are just as detailed, polished and awe-inducing as those found in Myst III.

I’ll admit, I am a sucker for visuals and sound. If they keep my attention, I’m likely to play through anything, even another round of The Adventure Company’s other recent and far less superior title, Forever Worlds. Aura’s original score is not so original as it is entertaining. Oftentimes, the songs begin solemn and simple, but if you remain in the same basic location long enough, you are treated to a gradually growing and intensifying music experience. Rarely do adventure game music tracks run for as long as Aura’s. It is as if the developers knew the players would be spending hours in the same location, fidgeting with the same dang water wheel. To be sure, it is a nice gesture to soothe the ears while the brain turns into tapioca as it encounters yet another complex conundrum. 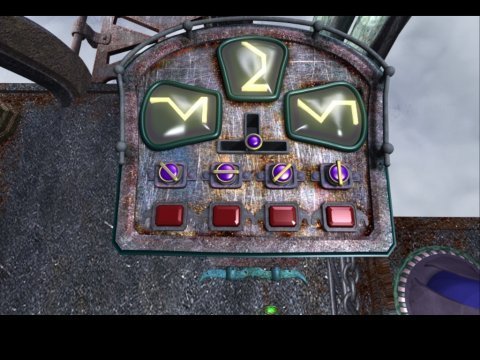 While I know well enough that I can be a shallow adventurer, only concerned about looks and sounds, I also love a good story. Don’t expect, however, story and character in Aura to provide you with the nutrition you’ve been waiting for. They’re just a bunch of empty calories, something equivalent to drinking a 40 oz. Big Gulp of soda. Sure the story will leave you feeling full, but in the end it’s all gas. So don’t play this game expecting an astonishing revelation or anything like The Adventure Company’s earlier first-person adventure Beyond Atlantis, a game featuring an esoteric and multi-cultural storyline. At its core, this game is a brain-busting puzzler, and if that’s what you like, you’ll feel satisfied after a round with Aura. All you need to know to carry on the “adventure” is that you are the chosen one and you must save the world.

As you travel to piece together strands of a half-established story in four parallel worlds, including Ademika, Dragast, Na-Tiexu, and the Island of Unity, you will soon realize that no task is made simple. If you wish to cross a bridge in Dragast, you must first work a piece of obscure machinery. Machines like this one lurk around every corner and remind me of the grueling difficulty of many puzzles found in another adventure/puzzle game, Schizm. But this is an important point: if the meat of this game is intended to consist of difficult, but solvable and ultimately rewarding puzzles of every kind, than Streko-Graphics has greatly succeeded.

Sure, many of the puzzles made me want to give up. I would stand looking over a series of cylinders that turn over and over, revealing circular shapes, and try with all my might to guess what I was supposed to do. Even when I stumbled upon the solution, I still never understood it. Also, I would sort through inventory, guessing EXACTLY how and when I was to use an item. Timing is critical; trial and error is critical; patience is critical for such a game. 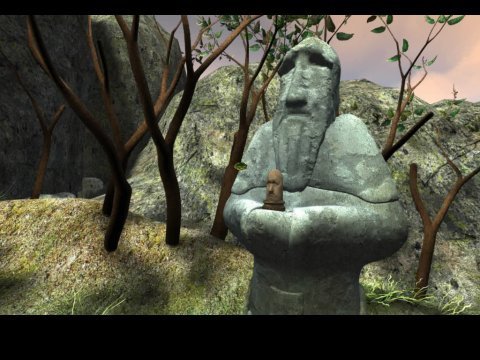 Luckily, the developers are at least partially aware that their game is a puzzle-laden quasi-adventure, and have included a special diary where Umang automatically jots down key ideas and even formulates some initial thought on puzzles. This is helpful, especially for a non-puzzle-lover like me. The inventory is also one of the most friendly I have recently encountered in a first-person, node-to-node crawler. It pops up on the bottom of the screen and when you run your cursor over an item, it magnifies in a little window and tells you what it is. Both the diary and inventory are functional; not pretty, not exciting, not blow-you-away original, but functional. And functional is a good thing to have when you must encounter non-functional machine after non-functional machine. If you enjoy reading Stephen Hawkings in your spare time, you may very well feel right at home as Umang.

I, however, could not ever feel comfortable in Umang’s skin. This alter-ego gives off quite an unlikable “aura,” looking more like a rocker from the 80’s than a distant-world hero, and sounding more like an untrained actor with too much spare time than a true magical apprentice. Whenever I saw Umang’s face and heard his voice, I cringed. Sure, I wanted the story to be carried on even if it was accomplished only in short cutscenes after hours of puzzling, but do the developers have to show us Umang? Must we listen to him speak? Even many of the characters he encounters seem more like parts of the environment with no motivation other than to meet the player and push him or her to the next brainteaser. Voices are stilted, character dialogue is poorly written, and any hope for Umang to grow out of his adolescent angst is thrown right out the window.

Aura: Fate of the Ages exudes a sense of wonder, and oftentimes it will make you wonder, even when it never intended to do so. There are times a player shouldn’t have to wonder, and there are some dilemmas a player shouldn’t have to encounter. Let me explain. I am sorry to report that my copy of the game suffered from a rather problematic glitch. There were several times during the game when sound cut out after an action and never returned. But, dang it, I re-worked the entire game just to hear the rest of the music, one of its saving graces. Later on, my wife could hear me scream from the computer room. The game appeared gorgeous as ever, the music played loudly, rumbling the walls; nothing seemed to be out of place. Then as I trekked back to meet Dragast, a once open pathway was now closed-off, unintentionally. The cursor refused to change, permanently barring me from the only tram in the world. I could not progress and had to restart and replay the game. Unfortunately, when incidences like this occur, it mars the gaming experience and dims its aura of grandeur, instead leaving behind a feeling of frustration. 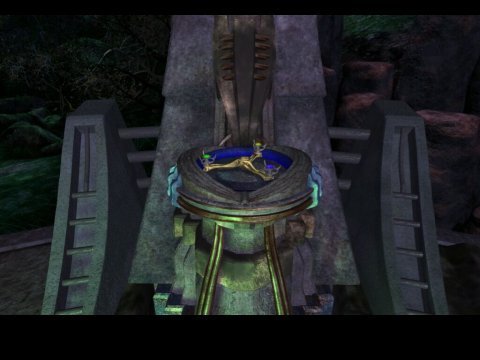 These problems, however, could have been particular to my reviewer’s copy of the game. I am in no way judging the game based on these blatantly obvious glitches. Hopefully I drive home a clear message: a puzzle-laden game that balances players on the verge of frustration will only push them over the edge with such irritating hiccups.

Aura: Fate of the Ages is a very difficult game to score. First of all, what is this game? Some call it a Myst-clone. I am more likely to refer to it as a Myst-mutation. It is an adventure game breed--a mutt, if you will--a conglomeration of Myst-style gameplay, harsher, more elaborate puzzle-puzzles, and atmosphere. I turned to the official site for guidance and read the following: “Lose yourself in this fantastic and rich adventure…and unravel the saga of intrigue, exploration and treachery that is Aura: Fate of the Ages.” Clearly, the description implies a storyline that captivates players, and plot points that inspire puzzles, but this simply is not the case. Aura is not about Umang or the magical parallel universes around him. It’s about melting your gray matter into a puddle of ooze. It’s about the puzzles--maybe even about pretty puzzles--but that’s about all. Streko-Graphics must know a little insanity can be a healthy thing; so if you don’t mind turning your computer room into an insane asylum, then Aura: Fate of the Ages is for you. Too much insanity, however, makes me want to use a walkthrough. 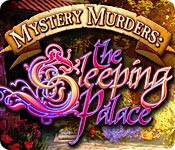 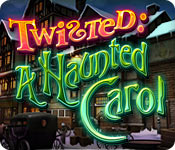 What our readers think of Aura: Fate of the Ages