continue reading below
» Home / Articles / Reviews / Dracula 3: The Path of the Dragon review

Review for Dracula 3: The Path of the Dragon 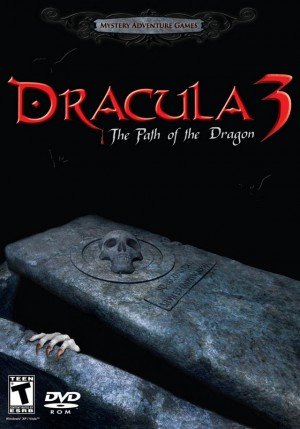 We get a small commission from any books sold.
Written by
Cameron Urquhart — September 12, 2008

Vampires… who doesn’t love them? With their suave demeanour and sexy arrogance, it’s easy to forget that life can be nixed with a swift bite from one, yet at the same time we enjoy the hunt and eventual staking of these demonic fiends. These hellish creatures have graced countless stories, movies, and even games over the years, and none more prominently than Count Dracula, the quintessential vampire whose legend, like the man himself, never seems to get old.

Dracula 3: The Path of The Dragon, the third game in the loosely connected vampire series that began with Resurrection and The Last Sanctuary, presents us with a much different and, dare I say it, more interesting approach than that of the romanticized Anne Rice vampire, or the irredeemable school delinquents of Buffy. Taking its cues from the Bram Stoker novel, the game presents a rich history of vampiric lore, back to its origin in the Wallachian Prince Vlad Tepes, more commonly known as Vlad the Impaler. The game’s history-heavy backdrop may sometimes appear overwhelming as it bombards you with dates, battles and important characters, yet it is never too much, instead adding depth to the story behind its titular character and giving a richness of plot not found in other games.

The story begins with Father Arno Moriani, a priest sent to Transylvania in order to investigate the candidacy of a recently deceased doctor for sainthood. This being Transylvania, and a game about Dracula, things obviously go awry, and as Father Arno investigates the circumstances surrounding Dr. Martha Calugarul’s death, he is ordered by the Vatican to debunk the vampiric myth. Naturally, their vain attempt to crush the superstitions of the natives eventually drives him to a confrontation with the ever-so-real head vampire himself. 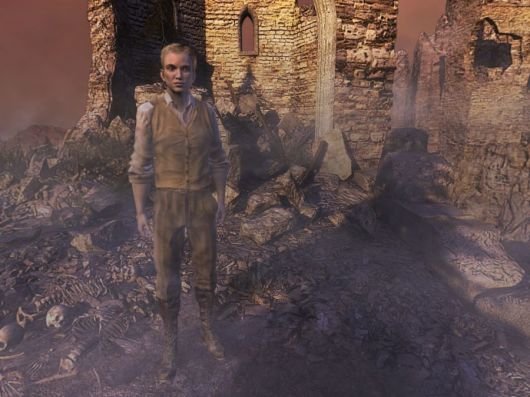 The plot twists and turns with characters appearing and disappearing (often under unfortunate circumstances) and secret motives being revealed, but it is never predictable and remains fresh throughout the course of the game. The initial investigation is over quickly, as Father Arno comes to realize the depth of Martha’s research into vampirism and her venture into the enigmatic “Path of the Dragon”, and this is where the real story begins. Controlling Arno, players must not only pursue scientific and historical reasons for the creation of the myth, but also investigate the myth itself. A pious man of strong character, this leads Arno to question his own convictions.

Much of the game involves Arno visiting historical sites, such as Vlad Tepes’ prison cell in Turkey, and travel back and forth from Budapest to Transylvania at key points in the story. Along the way, there is plenty of detective work, talking to the various characters and piecing together the whole story from their various myths and half truths. And although to the player it will be obvious from the get go that vampires are real, the protagonist’s doubt serves to provide a well-researched analysis of vampirism.

The dark orchestral music of Path of the Dragon is never cheery, as you would expect, and sets a marvellous tone for the game. Rather than becoming overbearing in its attempt to create tension, it is subtle yet powerful. The ambient sounds also lend themselves to this atmosphere, with the low whistle of wind, the howls of wolves, or the heavy beat of your own heart pumping as you find yourself in increasingly terrible situations, often requiring some bible reading to slow it down. However, the game is not so much a horror as an investigative thriller, featuring none of the typical jump-out-and-scare-you moments you might expect in a vampire title. 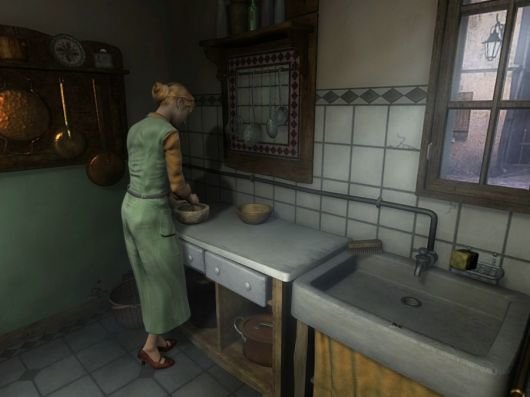 While used sparingly, each secondary character has a unique look and habits, such as the orphan who flips the disks he likes to throw against the wall, or the innkeeper who often wipes dust off of the front desk, and this distinctiveness is supported by the solid voice acting. Every word of dialogue is believable, and each voice fits perfectly with the characters’ personalities, except for their accents. One German character has a noticeable accent, yet all the other townspeople you come across sound American. Although not terribly jarring, it does seem odd. Nevertheless, the quality of the acting is a cut above many localized adventure titles these days. Dracula himself does make an appearance, though for better or worse, that doesn’t occur until very late in the game. For the most part, it is the fear of his presence that adds so much to the overall atmosphere of the game.

Visually, Path of the Dragon’s frequently interspersed cutscenes have a frightening realism and a welcome ominous tone, although the poor lip synching lets these cinematics down a little. The in-game graphics themselves are of equally high quality, with a fully panoramic environment, allowing you to explore in all directions as you move node to node. Transylvania consists of only a few locations at first, though further investigation opens up additional areas. The main location is the village of Vladoviste, whose distinct lack of townspeople is explained away by their fear of vampires and the fallout from World War I. Vladoviste accurately depicts a war torn country town, and you can feel the sadness and presence of death in the air as its superstitious inhabitants desperately cling to their faith to feel something greater than the awful times they have known. Budapest is the only other main location in the game, and it provides a striking image to polarize the landscapes. Its lush colours and amazing architecture, as well as its upper class characters, provide a very different feel than Vladoviste. Unfortunately, your exploration of Budapest consists only of a single office building, though it is visited on a few occasions, often with different reasons to search new areas of it.

Apart from the heavy fog and rolling clouds, most locations are largely static, without the slightest animation, yet the realism of the backgrounds helps to overcome this limitation. Strangely, whenever visiting the nearby castle the sky indicates it’s day time, yet in town it is always night. This constant darkness confused me, as surely a priest would be keeping regular hours while investigating the myth of the undead, when the villagers are more relaxed and willing to talk. One nice touch was the ability to see Arno accurately reflected in mirrors, even moving his gaze to follow the cursor. 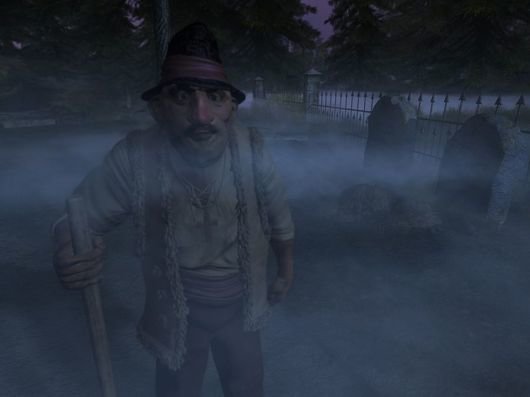 You’ll see the locations a lot as you trawl through them again and again, and come to appreciate their finer details, but although quite scenic, the lack of an instant travel map can slow down gameplay. At one point I had to traipse from the castle on one side of town all the way to the inn to pick up one puzzle piece, and then walk all the way back. Otherwise, the point-and-click interface is simple and user-friendly, with an objectives screen allowing you to keep track of what you’ve done and what you need to do, while a documents page allows you to read anything you’ve picked up along the way. You are also provided with a dialogue page for going back and reading every word said in conversation, and although not strictly necessary, it is nice to have the opportunity to check any detail you may have forgotten or missed the first time around. The inventory screen is easy to use, yet whenever you pick something up it goes into an auto holder off to the side rather than your main inventory screen. I never found a purpose for this holder, as it only caused me to think I’d accidentally lost some important item I needed.

Within the inventory screen, you are presented with a bible which you can use to skip to any passage to calm yourself. Although quite an interesting idea, it’s really not implemented well, as stopping what you’re doing just to slow your heartbeat becomes grating after a while. Apart from this niggle, the gameplay doesn’t pose the hardest challenge, but I mean that in a good way. Rather than being loaded down with contrived puzzles for padding, Dracula 3 relies heavily on inventory puzzles, yet you are never resigned to trying everything on everything. The hotspots are almost always necessary, while puzzles are logical and accessible and never feel out of place. Only one tile puzzle towards the end felt needless, and in one typing puzzle I was perplexed by the lack of keyboard support, but two amongst a whole game worth of puzzles is certainly an acceptable average. 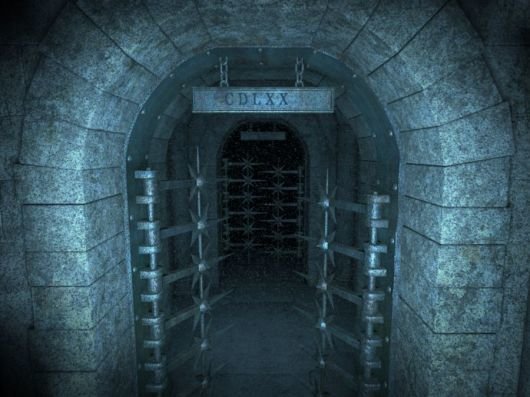 As Father Arno is trying first to debunk the myth and later chase it, many of the puzzles are science-based. Having been a medic in the war, Arno has a good grasp of what he is doing and can guide along those who may not. One such puzzle includes extracting his own blood (the medical way, not the vampiric way), first beginning with the sterilization of equipment, piecing it together, and then examining it under a microscope and comparing it with other samples to find a compound believed to be related to the myth of vampirism. Another includes the proper combination of chemicals in trays for the development of photographic evidence. Although these may seem too technical at first, help is never far away with Father Arno’s verbal musings about what he should do, or a helpful notebook of chemical combos. There are some potentially deadly puzzles as well, though these are not timed, relying on smart choices and not fast reflexes. Although there is no autosave function in the game, in such situations it thankfully reloads at the point just before you died, allowing you to try again.

I clocked in at roughly eight and a half hours of game time, and while somewhat short, its length ensures the game does not overstay its welcome. Instead, you’ll probably be looking forward to more in another sequel, which certainly seems possible at this game’s conclusion. And despite the “3” in its title, it’s certainly not necessary to have played the previous games in the so-called “series”, as it holds up very well as a standalone adventure. With its focus more on science and history, the game is less for fans of horror than for those with a hint of detective and researcher inside, so it’s important to know what to expect going in. The game rarely wows you in any one way, and the pace can drag at times in dry subject matter, but overall it’s both logical and accessible, and with its interesting approach to vampire lore and deftly crafted storyline, Dracula 3: The Path of the Dragon is worth picking up.

WHERE CAN I DOWNLOAD Dracula 3: The Path of the Dragon

Dracula 3: The Path of the Dragon is available at:

Dracula 3 is a solid adventure with an intriguing mix of legend and fact, but there’s more science and history than garlic and stakes.

GAME INFO Dracula 3: The Path of the Dragon is an adventure game by Kheops Studio released in 2008 for iPad, Mac and PC. It has a Illustrated realism style and is played in a First-Person perspective.