Francisco “Grundislav” Gonzalez is well known for his three Reality on the Norm titles, where he introduced us to a number of funny characters such as Hooky the pirate postman and Lucca the Italian chef. Now Grundislav hits the underground adventure scene with Ben Jordon: Paranormal Investigator, a game that’s a little darker in tone when compared to his earlier work, but just as entertaining.

A wildlife preserve in the Florida Everglades sets the stage for a string of violent murders. These murders, the park rangers believe, are the work of a hideous creature known as the “Skunk Ape.” The police are no help, so the rangers call upon Ben Jordan, rookie paranormal investigator, to take on the case. Ben has just finished arguing about his newfound career choice with his disappointed mother, so he is more than happy to oblige. 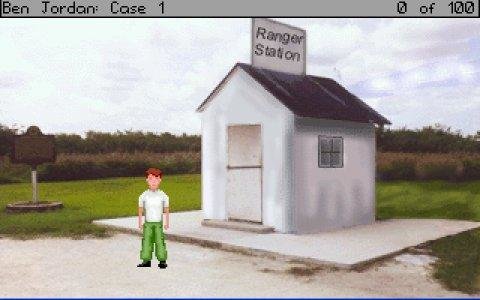 The interface is the Sierra/AGS standard, with a few interesting touches. At the top of the screen, there are the usual icons for walking, talking, looking and interacting. You can cycle through those options by right-clicking. Any player of early 1990's Sierra games will be in familiar territory here. The player’s inventory contains a notebook--a useful feature that keeps track of all the information you have uncovered.

The dialogs are presented with animated character close-ups a la King’s Quest VI, which is a very nice addition and rarely seen in amateur games. However, this feature is slightly marred by the fact that the characters’ expressions do not change. Ben keeps his bright-eyed, innocent smile throughout the adventure, and doesn't change it even when being threatened by a huge, slavering beast that’s about to rip his head off. A few more facial expressions would have gone a long way in drawing the player into the game.

The game’s graphics are sweet and simple and get the job done. The only main gripe I have with the graphics is that the quality is not consistent from room to room. Some backgrounds are very detailed and look like a lot of time went into them, while others look like photo-realistic images that were meshed together in Photoshop. There are a few backgrounds that seem rushed and spotty, and contain a few shortcuts like green squiggles to signify distant trees. However, the game is short enough that the varied art quality shouldn't bother anyone too much. The character sprites are nicely detailed and smoothly animated. 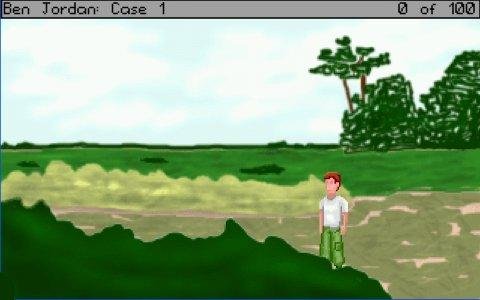 Grundislav’s previous games are known for being very high on story and characters, but very low on puzzles and gameplay, and this tradition continues here. Ben Jordan: Paranormal Investigator contains a great story and some very interesting characters, but they are all squeezed down into a very tiny space. Ben’s investigation is extremely short, and the game feels very rushed as a result. I wanted to spend more time talking to the interesting NPC's and investigating the strange history of the Skunk Ape. This is a game that practically cries out for slower pacing. It is a testament to Grundislav’s storytelling ability that he has created a world that I want to spend more time in, and I feel a bit cheated that I can't.

Despite these minor flaws, Ben Jordan: Paranormal Investigator is well worth your time. The story is interesting, the climax is exciting, and the original music by Andreas Slotte is excellent. I hope to see more Ben Jordan adventures in the future!

What our readers think of Ben Jordan: Paranormal Investigator