Even the most diehard Sierra adventure game fan may never have heard of Codename: ICEMAN. Created in 1989 using the SCI-engine, it's one of the few Sierra properties not to launch a franchise (though they wanted to, and even tossed around the name Codename: PHOENIX in a few "Coming Soon" notices), despite being written and designed by Jim Walls, the author of the first three Police Quest games. The unusual nature of ICEMAN may have limited its appeal, as it's a true genre-bender, asking: "What do you get when you cross a third-person adventure with a submarine simulator?" And they say there are no stupid questions.

Although it may have an espionage-sounding name, they could've easily called this one Navy Quest. Lt. Commander Johnny B. Westland's vacation in Tahiti is cut short when the United States' Ambassador to the Middle East is kidnapped by Russian-sponsored terrorists in Tunisia, demanding 10 million dollars within 30 days. It seems Tunisia has discovered abundant oil reserves, and the Cold War superpowers are fighting for exclusive access. Westland is assigned as the Executive Officer of a submarine, the U.S.S. Blackhawk, and must assist in piloting it from Pearl Harbor to the Mediterranean. Once there, he's to launch a rescue mission with the help of a female spy who's already infiltrated the area. If they fail, it could be the start of World War III.

Not that any of the characters populating ICEMAN’s world would be missed. Westland has the personality of a magazine cut-out, barely uttering more than a few words in the entire game, while the female "secret agent" who helps him is borderline incomprehensible. The rest of the game's population are nothing more than job titles: Clerk, Agent, Captain, Radioman, Mechanic, Guard, etc. I think the mechanic's name was Willie, but don't hold me to that. 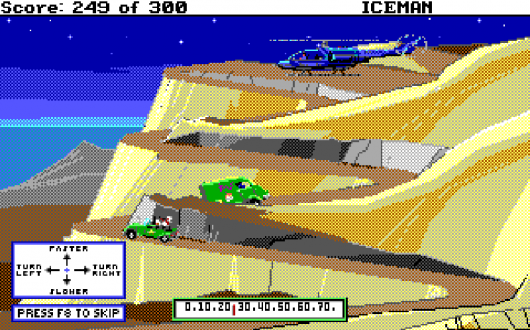 The interface is typical of Sierra adventures of this time period (King’s Quest 4, Quest For Glory 2, etc.), where movement is handled with either the mouse or the arrow keys, and everything else is done with brief text commands. However, a few moderations make interacting with ICEMAN a lot easier than you might expect. Not sure what a certain clump of oddly-colored pixels is supposed to be? No problem. Just turn yourself towards it and type LOOK, and you'll automatically get a description of whatever you're facing. Someone yelling at you over the phone, demanding to know why you're bothering them? You only need to type TALK and Westland will automatically explain himself. Finally, if an object you want to pick up or manipulate is across the room, but in your exuberance you type the command early, the game won't chastise you with a GET CLOSER TO IT, Westland will simply turn and cross the distance on his own.

One consequence of the text interface is that even the simplest task becomes a "puzzle." Whereas in a more modern point-and-click adventure, you could click the TALK icon on the woman at the bar and follow a dialogue tree, in Codename: ICEMAN, if you want to get anywhere with her you have to ASK HER TO DANCE or BUY HER A DRINK. The parser is usually pretty forgiving, but occasionally it will refuse to LOOK POCKETS, demanding you LOOK IN POCKETS instead. Many of ICEMAN's puzzles involve remembering something you were told earlier. You'll definitely need to keep a notepad nearby while you play, as there will be many, many things to write down: phone numbers, safe combinations, directions, latitudes and longitudes, code keys, secret messages, procedures, headings, distances between points, and so on. Bring an extra pen so you don't run out of ink.

But your notepad will not be enough. Attention, used game buyers -- Codename: ICEMAN cannot be completed without the manual. We're not talking a little copy protection in the first five minutes either. In fact, a more cynical person might accuse this entire game of being an elaborate form of copy protection. From the proper procedures for boarding a submarine, to the necessary code keys to get instructions from Washington, all the way to the extremely detailed and absolutely label-free submarine control panel, the manual will be your constant companion. ICEMAN also comes with a map of the world you'll refer to when it comes time to plot a course, although with a little patience (or an actual atlas) you could make do without it. 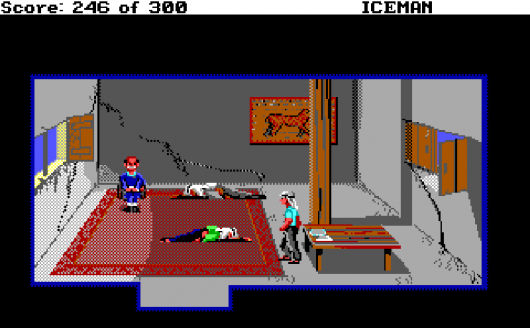 Unfortunately, ICEMAN doesn't come with a map to help you avoid the numerous dead ends. It's not unusual for an adventure game to allow you to leave an area without a vital item, but they're not usually so gleeful about it. ICEMAN finds particular delight in giving you a single opportunity to accomplish a task, many dozens of minutes before you have any idea the task is necessary. You may find yourself, as I did, wondering how you're supposed to fight a Russian Destroyer with malfunctioning torpedo tubes. If you'd taken the time to investigate the torpedo room (the entrance to which is virtually invisible) when you were called away to decode secret messages a while back, you could've fixed them, but by this point it's too late. Save early, save often, save under as many different names as you can. Besides dead ends, there's also the dreaded Sierra Sudden Death Syndrome. My first unexpected death came within five minutes when I decided to leave the beach for a quick swim. Big mistake. Another returning Sierra feature is the points system. A total of 300 points are supposedly available, but even after I finished the game and went back to experiment, checking every walkthrough I could find, I couldn't get my score higher than a lousy 257.

Some of those missing points may have been sacrificed by shoddy performances in the various mini-games, simulators, and "action" sequences that take up at least half the playtime. For instance, when it was time to turn on the closed circuit camera and drive in between the icebergs (imagine the world's slowest downhill slalom), the game came right out and told me I only scored 9 out of 10. Most of the sub simulator isn't that exciting, and involves a lot of switching from All Ahead Slow to All Ahead 1/3rd, and diving to 300 feet, then coming back up again. The way you do this is either with the mouse or the keyboard (keyboard is easier and more precise), with the manual open at your side. The Captain barks an order and you must comply within a forgiving amount of time, or you'll have to Restore, Restart, Quit. The only real issues with this are when the directions are overly vague (ACKNOWLEDGE GREEN BOARD had me puzzled for a while), otherwise it's all fairly straightforward and even kind of fun. That is, until you’re under attack.

There are only two Naval battles in the game, and each one requires its own strategy. Once again, it's back to the manual to learn the difference between Active and Passive Sonar, which torpedoes are best for a given situation, how to turn on Silent Running, and what a temperature inversion layer can do for you. The monitor gives you a picture of your sub on the left side, a picture of the enemy ship on the right, and underneath each little icon is one or more growing bars. When the bar moving right to left is almost on you, it's time for evasive action or a decoy, while the bar from left to right shows your own offensive progress. You can run out of torpedoes, so don't fire your sub like a tommy gun or you'll be sunk in no time. And torpedoes don't always hit their targets, so save and restore tactics are advised. If all else fails, sometimes it's easier to run and hide. 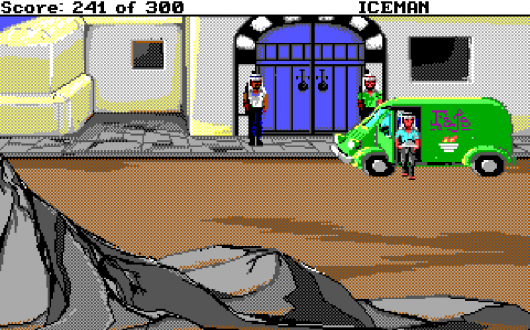 The only major side-game that doesn't allow save and restore tactics is the dice game. Restore in your own favor more than a few times and you'll be accused of cheating and have to go back to an earlier point to start all over. There's no getting around it either; you must win the dice game and win it decisively to acquire a few vital inventory items. It's called Boss Dice, and it's graded in the same fashion as poker, only with no straights or flushes. Best hand wins; win two out of three to take the pot. You'll have to take the pot several times before the salty sailor you're playing with will throw in the item you really need. There are a couple other non-traditional sequences, including a car chase at the end that's so broken it's the only time they actually give you the option to "Skip" it (though it deducts 10 points if you do), but none of them are very deep or interesting.

The visuals are old school Sierra all the way. Long-time adventure fans will feel a wave of joyous nostalgia as soon as they boot up. For the most part the little clumps of pixels are identifiable, though there isn't much detail (the worst offender is an item hidden in the sand that's only a pixel large). The music is pleasant in that old-fashioned PC speaker way, though it can occasionally be shrill and annoying. Long stretches pass in complete silence, so you may as well turn the music off and put a CD on. Without a doubt, the best use of sound is at the sub control panel. The low background rumble, the PING of the sonar, the THFFFT of an escaping torpedo; the quality and variety of the sound effects create a surprisingly effective auditory experience, especially in a game that's now almost 20 years old.

If I had to choose a single word to summarize the Codename: ICEMAN experience, it would be "mundane." Even saving a person's life on the beach becomes a tiresome exercise in transcribing exactly what the manual says to do for CPR. The most complex puzzle in the game involves taking measurements of cylinders and gathering the proper sizes of nuts and bolts from a tool shed. By seeking to create an authentic experience, Sierra took away the unrealistic fun of single-handedly saving the world and replaced it with stuff like plotting the most efficient route between two points within a minimum accepted range of deviation. Depending on the amount of time you spend restoring to earlier saves because you wandered down a dead end, the game will last 8-10 hours, more than enough time to wear out its welcome. If you're an adventure fan who also loves submarines, note-taking, and dice, this may in fact be the perfect game for you, but everyone else will want to leave Codename: ICEMAN in deep freeze.

For submarine simulator fans and Sierra completists only.

What our readers think of Codename: ICEMAN