We get a small commission from any books sold.
All Bitmap Books
Written by
Heidi Fournier — February 4, 2003

Once again Atrus, that prodigious writer of worlds, is in trouble, and as his trusty right hand man/woman he once again turns to you for help. It seems that not all are happy with his decision to imprison his two errant sons in his books. Saavedro, a demented refugee of one of the worlds Sirrus and Achenar wreaked havoc upon, feels that caning followed by hanging would have been a much more appropriate fate. Thwarted in his plans to avenge himself upon the brothers, he decides to go after the next best thing, Atrus. And what better way to get revenge then to steal Releeshahn, the book-world Atrus has created for the D’ni? He’ll take Atrus’s precious book and make him suffer as he has.

All right, for all those present who are Myst-impaired, let’s do a little catch-up before we proceed further. Find a seat and let’s begin. In the beginning, Atrus and his wife Catherine had two sons, Sirrus and Achenar, who led a parade of destruction through a number of Atrus’s worlds before he imprisoned them both in books. Then Gehn, Atrus’s overly self-actualized father, swiped his wife and imprisoned her on Riven. Luckily, she was saved and Gehn was destroyed. But now a new problem has come Atrus’s way: his people, the D’ni, have lost their home world and need a new one. Being the ever-powerful writer of worlds, Atrus decides to help them out by writing them a new home, Releeshahn. In Releeshahn, he tries to create a place that will not suffer from the instabilities of so many of the other worlds he has written. Then just as he is about to toast his success, Saavedro pinches Releeshahn, bringing us to where we came in. Ok, turn the lights back on and lets continue.

As you have saved Atrus’s keester on numerous occasions, he again looks to you for help to recover Releeshahn. To do this you must pass through three different ages: Voltanic, a dreary industrial-flavoured island; Amateria, an Asian-inspired theme park type world; and finally Edanna, a garden world blooming with trees and plants. Each has a number of tests and puzzles that you will have to solve in order to get its symbol, the reason you where sent to that world. You see, Saavedro isn’t your ordinary demented mad man making you sing for your supper; he is also a teacher. The pilgrimage he has concocted was meant for Atrus, a man he feels needs to learn a little bit more about nature, energy, and balance. So as the weary traveller sent to walk in Atrus’s moccasins you will need to find these symbols to defeat Saavedro in the final act. 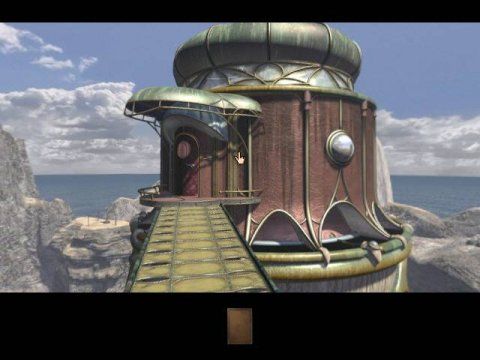 By far my favourite of the three worlds was Amateria. Call me a Disneyphile, but I just love a good roller coaster ride, and this world delivers. The graphics are wonderfully ambient and tantalizing, with different and distinct surroundings rolled into one island. On one side are giant sunken bones, on another layered hexagonal water pools with lapping water—which can even be seen gently lapping from a distance—and in the middle an Asian-style temple. And all this grooviness is surrounded by a giant roller coaster.

My least favourite—and I think I may be in the minority here—was the Edanna age, which I found very confusing. After wandering around it for a few hours, all the twists and turns produced the same nauseating effect you get from watching hand-held home movies. Nothing seemed clear or easily laid out, maybe the exact effect the designer was hoping for, but one that I did not find particularly interesting or exciting. Voltanic, the third world, was an intermingling of logical puzzles couched nicely into a bleak, but interesting multi-levelled industrial style environment.

Most of the challenges the player will face in this game are of the pull-move-turn type. None were exceptionally difficult, a real turn of events for a Myst sequel. For those of you who have played Myst and Riven, the puzzles here will seem ludicrously easy. I almost couldn’t believe I only had to go pixel hunting once. Though the brainteasers do get slightly more difficult as you work your way through the game, Exile is still by far the easiest of the three games. I was intrigued by this turn of events; was Presto trying to dumb down the game? And why would they, when being incredibly difficult had not hurt the sales of the previous two games? I suspect it had more to do with the fact that adventure games don’t sell as well as they used to. Plus, it’s been almost ten years since Myst hit the scene, a verifiable dinosaur compared to the slew of sleek new action games that fill the stands weekly. Presto assumed that it’s better to appeal to as many people as possible, and I for one don’t mind at all. There were times in Myst and Riven when I almost uninstalled the game after spending a disgusting amount of time trying to figure out something, which can really sour a gaming experience. The trick, which I think Presto has achieved in Exile, is to have a good mix of easy AND hard challenges. 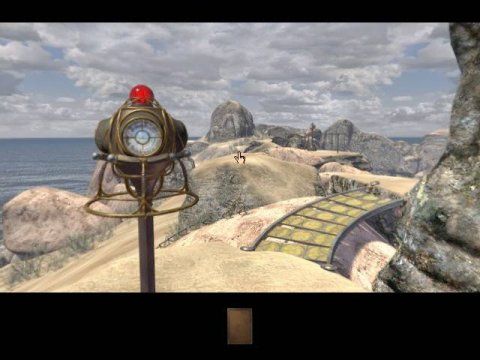 Where Exile stumbles is with the inclusion of the character of Saavedro, as played by Brad Dourif (One Flew Over the Cuckoo’s Nest). I don’t know if Dourif was instructed to emote so overdramatically, or if it was just his talent running over, but by the time I got to the mid-point of the game, I was quite sick of him. There are a series of FMV (full motion video) movies of him that the player needs to listen to before embarking to the learning worlds, and they become increasingly embarrassing to watch. In all fairness, Dourif is the only character interaction a player experiences in the game, something the pervious two games had little of, so his inclusion here may just seem too in-your-face when viewed in the context of the trilogy.

So was Exile a success? You bet. Presto made a daring move in taking over this much-lauded series, and delivered on their promise to create a worthy successor. They stayed true to the vision of the earlier two games while still taking the opportunity to include a few new touches of their own. I really enjoyed the 20 hours it took me to play Exile, and I think you will too. It is a worthy sequel in a venerable franchise.

An extremely succesful and balanced adventure, and a worthy sequel in a venerable franchise.

What our readers think of Myst III: Exile

It is short, but sweet

One of my favorite Myst games. It possibly is not as difficult as other entries in the series, but it is beautiful and gives you a rich world to enjoy. Read the review »